Beshalach (When He Let Go): Listening for God’s Instructions 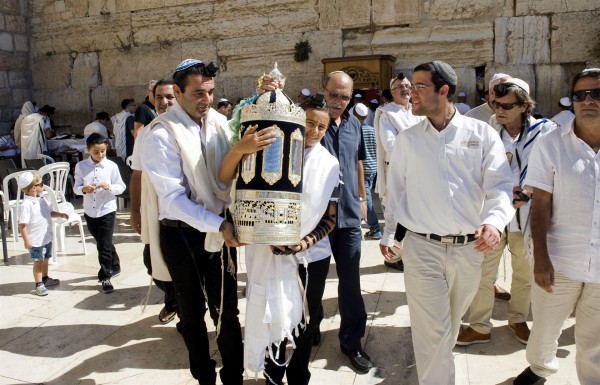 Carrying the Torah at the Western Wall

“Then it came to pass, when Pharaoh had let the people go, that God did not lead them by way of the land of the Philistines, although that was near; for God said, ‘Lest perhaps the people change their minds when they see war, and return to Egypt.’”  (Exodus 13:17)

In last week’s study, Parasha Bo, after the last and most devastating of the Ten Plagues (Death of the Firstborn), Pharaoh finally relented in letting the Israelites go free.

This week, however, in Parasha Beshalach, Pharaoh changes his mind and races after them to bring them back into slavery.  Thinking they are lost in the wilderness, Pharaoh seemingly traps them against the Red Sea.  There is no escape.  But God miraculously splits the waters so that His people pass through on dry land, while the Egyptians drown behind them.

In relief and thankfulness to God for this amazing victory over those who wished to enslave them, Moshe (Moses) and the Israelites sing a beautiful song called Shirat HaYam (שירת הים)‎, the Song of the Sea.  Some also call it Az Yashir Moshe (then Moses sang), which are the first words of the Song of the Sea (Exodus 15:1).

This song is recited daily as part of the Shacharit (morning prayer service).

It is written in a unique wave or brick-like pattern in the Torah scroll and is recited in regular chant and traditional melodies. 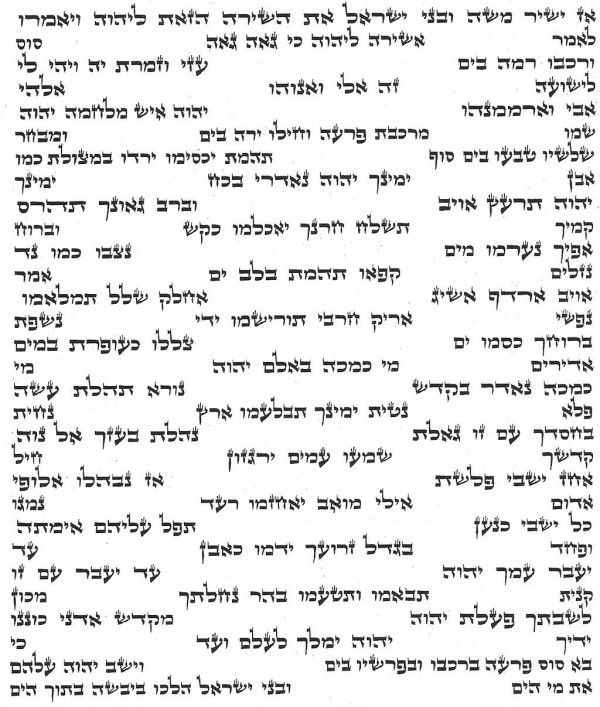 In true humility, this song gives no glory to the leadership of Moses or praise to the people for the faith it took to walk between walls of water, but totally gives the glory and praise to the Lord.

“I will sing to the LORD, for He is highly exalted.  Both horse and driver He has hurled into the sea.”  (Exodus 15:1)

This song of Moses is, perhaps, also mentioned in the Brit Chadashah (New Testament) as a song that will be sung by those who defeat the beast in the end times.  However, this time they will be singing by the sea of glass instead of the Red Sea and holding harps instead of tambourines:

“Those defeating the beast, its image and the number of its name were standing by the sea of glass, holding harps which God had given them.  They were singing the song of Moshe, the servant of God, and the song of the Lamb: ‘Great and wonderful are the things you have done, Adonai, God of heaven’s armies!’” (Revelation 15:2–3) 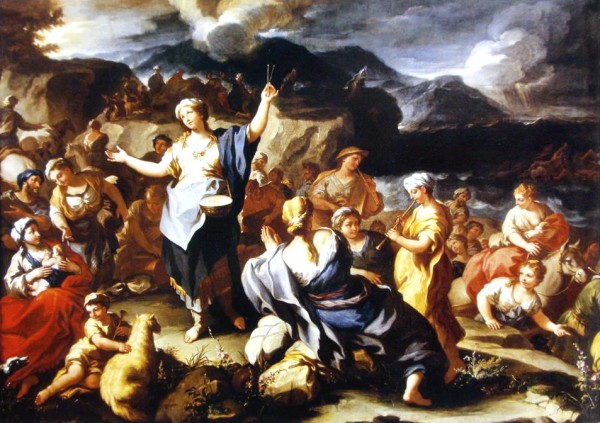 The Song of Miriam, by Paulo Malteis

Moses’ sister, Miriam, also goes out with the maidens, and they dance for joy with tambourines.

Because of these songs, this week’s Parasha is also called Shabbat Shirah (Sabbath of Singing).

Besides reading the Song of the Sea and the Song of Miriam on Shabbat Shirah, some have the custom of feeding the birds, in honor of the beautiful melodies that they sing and, perhaps, the manna that was found on the ground by the Israelites in this reading.

This is, of course, unusual in that wild birds are generally not fed on the Shabbat; only domesticated birds such as geese and chickens may be fed.

The Talmud explains that the Shabbat should not be broken by feeding animals that can fend for themselves, although there is a responsibility to feed the pets and domesticated animals that are under your care. 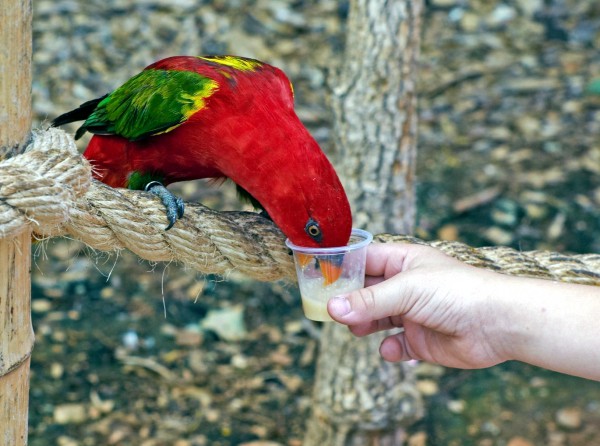 A parrot is fed at the zoo in Jerusalem.

Haftarah Reading: The Song of Deborah

Both the Torah portion and the Haftarah (prophetic portion) of this week’s study contain victory songs by God’s people.

In the Parasha, the Israelites sing the Song of the Sea, extolling and honoring God for delivering them from Egypt.  In the Haftarah, the Song of Deborah is sung when God gives them victory over General Sisera and the Canaanites.

“Then Deborah and Barak the son of Abinoam sang on that day, saying: ‘When leaders lead in Israel, when the people willingly offer themselves, bless the LORD! Hear, O kings! Give ear, O princes!  I, even I, will sing to the LORD; I will sing praise to the LORD God of Israel.’”  (Judges 5:1–3)

In the Song of the Sea, only God receives praise and glory while in the Song of Deborah, the actions of valiant men and women are also praised. 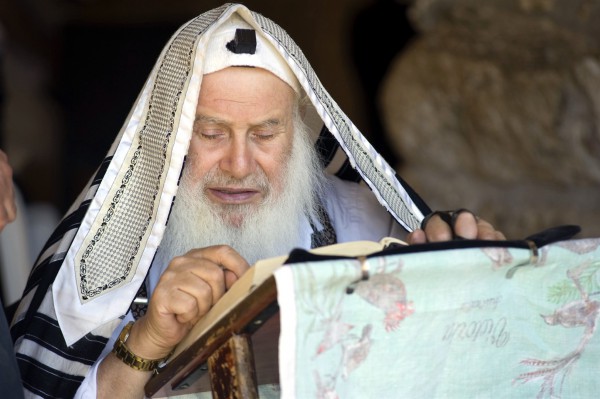 A Jewish man wearing a tallit (prayer shawl) and tefillin (phylacteries) prays at the Western (Wailing) Wall in Jerusalem.

There are several other connections between the Torah portion and this prophetic portion from the Book of Judges.

In both accounts of Israel’s victories, their enemies had assembled against them in chariots, but God threw their enemies into a panic.

Also, in both the Parasha and Haftarah, Israel’s enemies were swept away in water, and the women celebrated by singing and dancing.

Music is a beautiful, God-given gift to His people.  Sadly, many in the world misuse this gift to glorify the powers of darkness with vulgarity and promiscuity or the promotion of violence and death.  However, we can use the gift of song to praise Adonai for His goodness and mercy.

Our response to the victories that God brings us in our lives can be freely expressed with rejoicing, with singing, and with dancing, just as Moses, Miriam, and Deborah did: 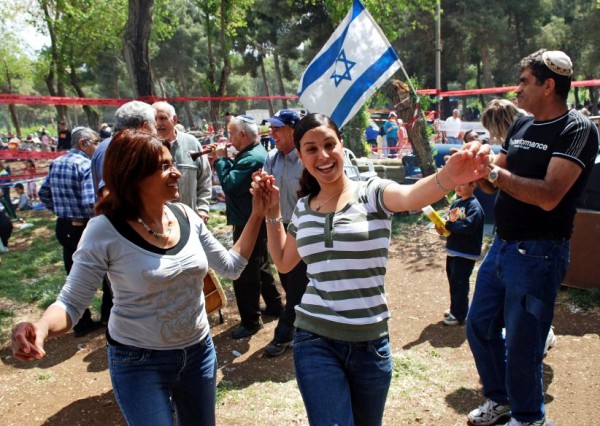 Two women joyfully dance on Jerusalem day to celebrate the miracle of the rebirth of the independent state of Israel.

The Hebrew word Beshalach (בְּשַׁלַּח), the name of this Parasha, means when he sent.

Pharaoh didn’t simply let the people go; he sent the Israelites away.

When he did, God did not lead them on the straightest, most direct route to their Promised Land, which would have taken them through Philistine territory and into certain battle.  Instead, He led them around and through the Red Sea or Yam Suf (literally, Sea of Reeds).

Why didn’t God take them on the quickest route and into battle?

The Rabbis answer this with a story of a man who purchases a cow and takes her home to produce milk for his family, not to kill her for her meat. 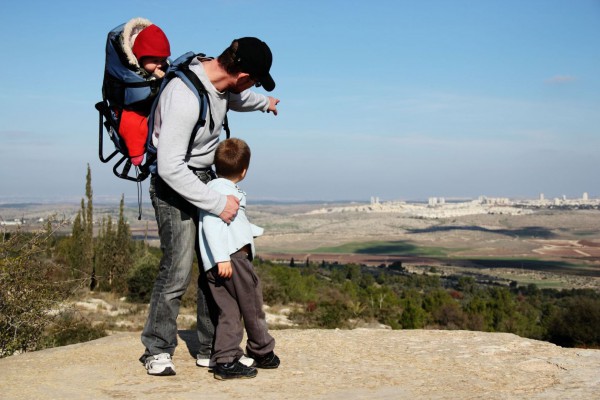 An Israeli father points out the family’s hometown during a hike.

Similarly, God did not want the Israelites to go through Philistine territory and immediately encounter a war, lest they lose heart in God’s protective care and run back to Egypt.

Likewise, God might not take you on the most direct route to fulfilling your destiny.   Instead, He just might take you out of the way a bit, proving His magnificent love for you by parting a sea on the way or lighting your path during a time of darkness.

With that firsthand experience of God’s Presence, your faith will be made stronger to sustain you in the trials that will certainly come to you further down the road.

Still, as with any relationship, it takes more than one great experience with God to know who He is and to understand His character, integrity, and love.  So sometimes the journey to our destiny is more than roundabout; it is the long way.

This truth is evident at the Red Sea.   Even though the Israelites experienced walking out of Egypt with the spoils of the land and their firstborn sons still alive, that was not enough to calm their fears for long. 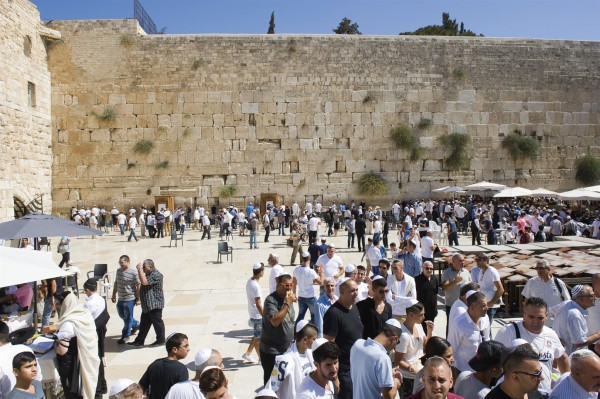 Israelis visit the Western (Wailing) Wall, the largest open-air synagogue in the world.

On the Way to the Promised Land

The Israelites’ reaction when they saw Pharaoh pursuing them confirms that they were not yet ready for battle.

The frightened Israelites did the right thing with their fear: they cried out to God!

Then they did the wrong thing: they blamed Moses for bringing them out of Egypt, only to be annihilated by Pharaoh’s soldiers.  They considered it better to have been left to serve the Egyptians than to die in the wilderness (Exodus 14:11).

Sometimes, when moving on the path to greater freedom, we may encounter fearful challenges and wish we had just stayed where we were, no matter how painful or uncomfortable that old place felt.

Nevertheless, moving ahead means facing new challenges and seeing God’s power demonstrated as we overcome them.

Moses reassured the Israelites that God would fight their battles for them, and they would only need to hold their peace.

“But Moses said to the people, ‘Do not fear!  Stand by and see the salvation of the LORD which He will accomplish for you today; for the Egyptians whom you have seen today, you will never see them again forever.  The LORD will fight for you while you keep silent.”  (Exodus 14:13–14) 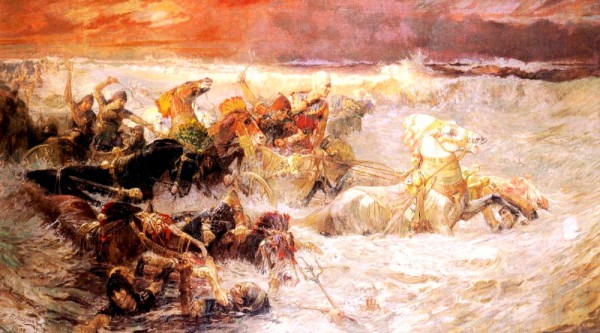 The Israelites had a dilemma: they were trapped between a big sea and an angry Egyptians army — and Moses told them to “keep silent.”

That silence involved a choice.

On one hand, they could keep silent, hear the approaching chariots, and surrender to them in overwhelming fear and helplessness.

On the other hand, they could keep silent, listen for God’s direction to move forward (kadima!), and obey Him.

Their silence was not meant to be passive.  It involved action.

So often we are told to “wait upon the LORD,” and we often accept this to mean “do nothing.”

It is true that there are times when we must find the patience to simply do nothing but wait until God shows us His direction; however, there are also times when God says, “Move forward!”  At those times, we are to rise up from bended knee in heroic faith and go! 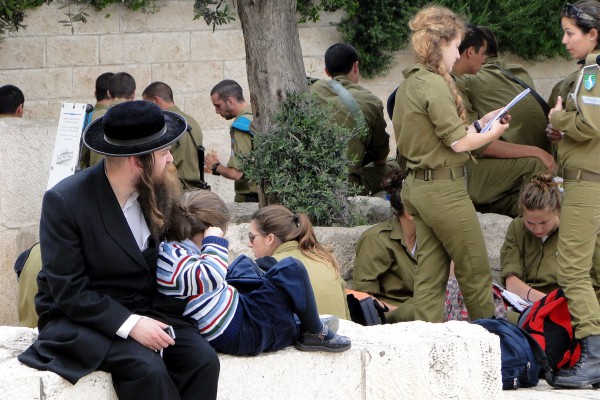 A father sits with his daughter in Jerusalem.  Around the two are the young men and women who are called upon to protect Israel from the nation’s enemies.

God has wonderful blessings and victories in store for us if we would only take the first steps of faith, trusting in His leadership and wisdom.  Through Yeshua (Jesus) we are more than conquerors (Romans 8:37).

Let us, then, not miss our orders to go forward with boldness and confidence to possess the Land that is ours.

Moses demonstrated great faith to his people.  We also need to encourage those who are fearful, reminding them of God’s great power, love, and faithfulness.

“Say to those with fearful hearts, ‘Be strong, do not fear; your God will come, He will come with vengeance; with divine retribution He will come to save you.’” (Isaiah 35:4)

Today, as the people of Israel stand surrounded by a sea of hostile enemies, bombarded by a wave of terrorism, may all Believers reach out to the Jewish People with words of faith and courage that God is not only our physical salvation but also our spiritual Salvation through Yeshua.

He will fight our battles for us.  And as we go forward, we can be at peace as we trust in Him.

“You will bring them in and plant them on the mountain of your inheritance — the place, Lord, you made for your dwelling, the sanctuary, Lord, your hands established.”  (Exodus 15:17)