Are You Clinging to Jesus the Rabbi? Learn about Devek and Tzaddik

Jewish men gather at the Western (Wailing) Wall for prayer.

“It is the LORD your God you must follow, and Him you must revere.  Keep His commands and obey Him; serve Him and hold fast [davak] to Him.”  (Deuteronomy 13:4)

What is a good way to begin a conversation about Yeshua (Jesus) with a Jewish Person?

That’s right.  In the Hebrew Scriptures, we find the word דבק davak, which means cleave, cling, hold fast to.  In modern Hebrew, the same three letters דבק (pronounced devek) is the word for glue.

Moses and Joshua exhorted the Israelites to cling to God for protection, blessings and victory.

Yeshua told His disciples to abide in Him as the only way to God the Father.

Similarly, Jewish People are taught to cling to their Rabbis as righteous intermediaries to God.

Let’s take a closer look at the role of this righteous intermediary, the Rabbi, in Jewish life, how Yeshua, perhaps, fits into that role, and what it means to cling to Him. 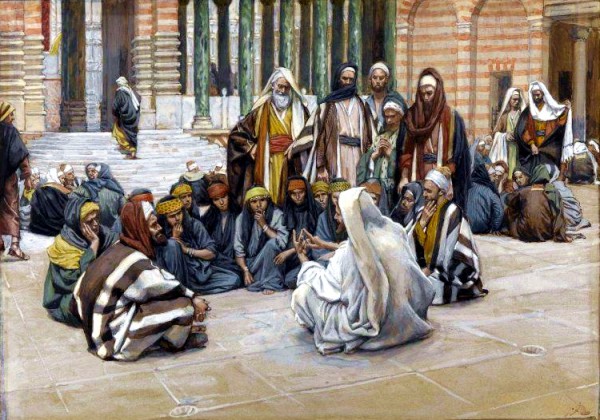 Yeshua Speaks Near the Treasury, by James Tissot

Clinging to the Righteous Rabbi

In the Book of Joshua verse 23:8, Joshua ben Nun gave his farewell speech to all Israel, commending them for having held fast to their God through thick and thin and encouraging them to continue doing so.

“But you are to cling [davak] to the LORD your God, as you have done to this day.”

Throughout the Torah (first five books of the Bible), it was devekut (attachment) to God that preserved the Israelites in the wilderness:  “You who held fast to the LORD your God are alive today, every one of you,” Moses told them.  (Deuteronomy 4.4)

And not practicing devekut kept all of them except Caleb and Joshua out of the Promised Land (Numbers 32:11–13). 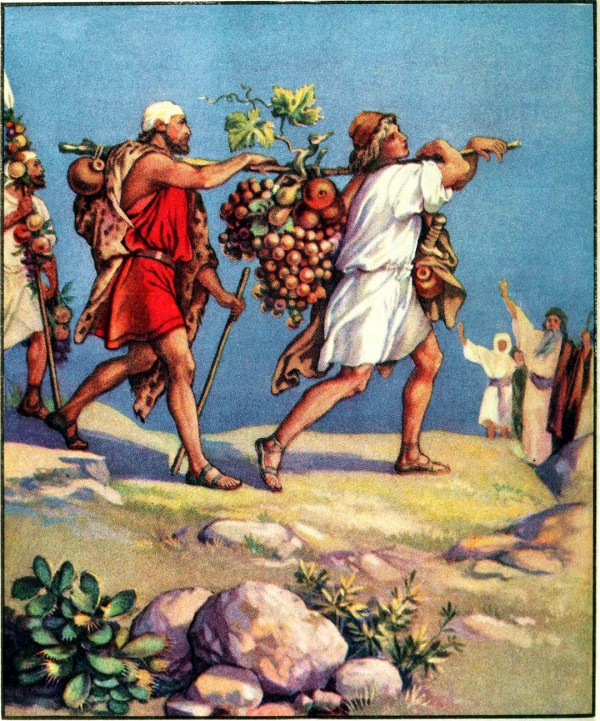 Twelve Spies brought back bountiful fruit from Canaan, but only Caleb and Joshua clung to the promise of God that He would defeat the fortified cities and giants in the land when it came time to enter and conquer it. (1919 Bible Primer)

As centuries progressed, the religious leaders who enforced Moses’ teachings evolved into Rabbis who saw a problem with clinging to God — He is “a consuming fire.”  (Deuteronomy 4:24)

As unholy creatures, just seeing God means death.  Therefore, the sages reasoned that devekut can only be fulfilled by clinging to a worthy representative of God on earth — a tzaddik.

The idea of a righteous one (tzaddik) is firmly rooted in the Hebrew Scriptures.

It comes from the word tzedek צדק, righteousness, as in Melchi-tzedek (King of Righteousness), who was the High Priest of the Most High God and king of Salem during the time of Abraham (Genesis 14:18).

The tzaddik is “one whose conduct is found to be beyond reproach by the divine Judge.”  (The JPS Torah Commentary: Genesis, 50)

Several people in the Brit Chadashah (New Covenant) are honored as
“righteous”: Joseph (the father of Yeshua), Zechariah and Elizabeth, John the Immerser, Simeon the Priest, and Joseph of Aramathea.

Each of these tzaddikim brought others close to God, but none of them were described as blameless.  That distinction is left to the ultimate Tzaddik. 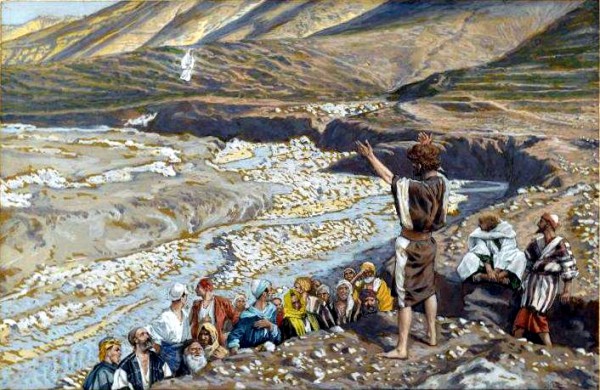 Yochanan the Immerser Sees Yeshua from Afar, by James Tissot

One Tzaddik above All Others

In Hasidic Judaism, which was founded 300 years ago, only one righteous man in each generation can rise to the level of what they have termed, Tzaddik HaDor — the most spiritually enlightened and righteous one.

And if found worthy, they also believe that one Tzaddik HaDor will become Tzaddik Yesod Olam, the righteous one who is the foundation of the world, the ultimate Tzaddik ― the Messiah.

Our ministry disagrees that there is one enlightened Messiah-like figure in each generation.

However, when speaking with Hasidic Jews, it’s important to understand that there are striking similarities between the Hasidic concept of clinging to a tzaddik and the Scriptural understanding of clinging to Yeshua, who we believe is the Tzaddik Yesod Olam — the Messiah — they are waiting for.

Let’s now look at these similarities. 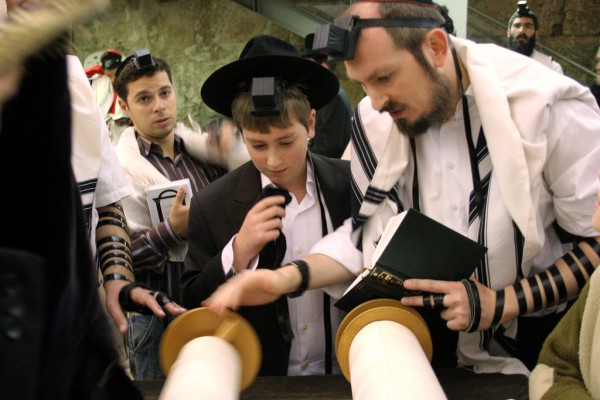 He Is the Foundation of the World

Rabbi Nachman of the Breslov Hassidic community (1772–1810), said that this righteous man “draws everything to him, for the true Tzaddik is the foundation of the world and everything derives from him.  All the other tzaddikim are only branches of the true Tzaddik.”   (The Essential Rabbi Nachman (trans. Avraham Greenbaum; (2006), p. 280)

The Apostle Paul (known as Rabbi Shaul before encountering Yeshua on the Damascus road) wrote in 1 Corinthians 3:11 that “no one can lay any foundation other than the one already laid, which is Yeshua HaMashiach.”

And Yeshua Himself declared, “I am the vine, you are the branches; he who abides in Me and I in him, he bears much fruit, for apart from Me you can do nothing.” (John 15:5) 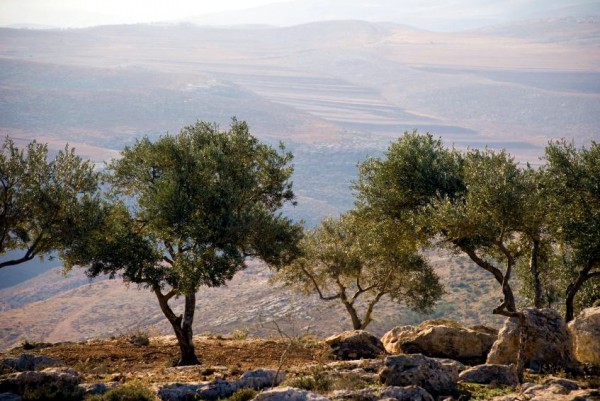 Olive trees on a hilltop near Shechem, the Biblical city where the patriarch Joseph was reburied.

He Is the Source of LIfe

Rabbi Nachman also taught, “The source of the spirit of life is the Torah, and therefore it can be received only from the Tzaddik, who is totally bound to the Torah.”  (Rabbi Nathan, Likutey Etzot: Advice of Rebbe Nachman (2015), p. 227)

Yeshua is Torah ― the Word of God!

The Apostle John (Yochanan) explained that “the Word became flesh, and dwelt among us, and we saw His glory, glory as of the only begotten from the Father, full of grace and truth.”  (John 1:14)

Rabbi Nachman continued by saying, “The Tzaddik hears the sighs of all who are attached to him, for he is the source of life for each one of them.”  (Likutey Etzot, 227) 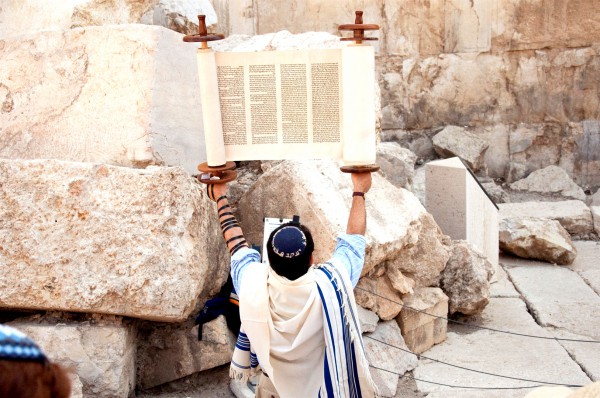 In Scripture, we are told that Yeshua “had to be made like His brothers in every way, that He might become a merciful and faithful high priest in service to God, in order to make atonement for the sins of the Jewish people.”  (Hebrews 2:17)

Hasidic teaching suggests that a tzaddik will often be rejected by his generation, particularly by “scholars and leaders.”  (Chassidic Dimensions: Themes in Chassidic Thought and Practice (1990), p. 116)

Although the Son of Man will usher in His Messianic Kingdom like a flash of lightning, Yeshua said that “first He must suffer many things and be rejected by this generation.”  (Luke 17:25 and Isaiah 53) 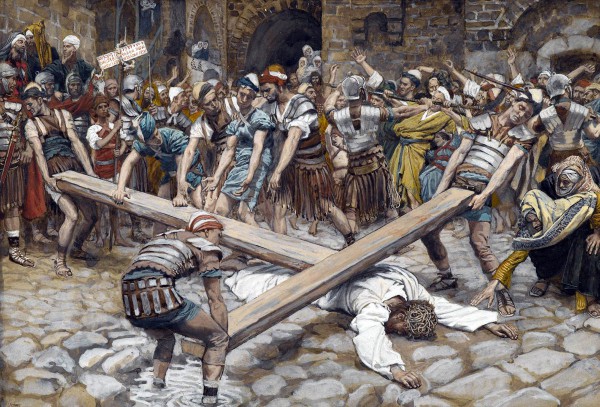 Simon the Cyrenian Compelled to Carry the Wooden Stake/Cross with Jesus, James Tissot

He Understands Our Humanity

Rabbi Tzi Freeman of the Chabad Hassidic community writes:  “The tzaddik feels pain and pleasure.  He grins, he smiles, he cries and he laughs.  He suffers bitterness of the spirit, and he dances with joy. …

“Like all of us, the tzaddik must eat and sleep.  He must take time for leisure, and he enjoys the company of others.  But he does all these things in a higher way, a divine way. …

“We do not have a high priest who is unable to empathize with our weaknesses, but we have one who has been tempted in every way, just as we are ― yet He did not sin.”  (Hebrews 4:15) 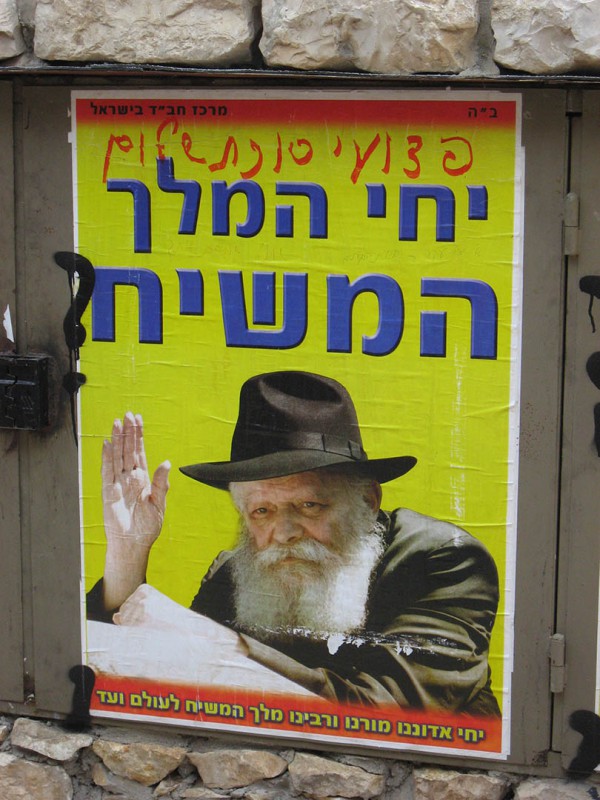 The Chabad Rebbe Menachem Mendel Schneerson is on thousands of posters and billboards throughout Israel. The text reads, “Long Live King Messiah.” Although he died in 1994, his followers believe that he is the last Tzaddik Hadon and will resurrect in the end times, as the Tzaddik Yesod Olam, the Messiah. (Photo: Wikicommons)

He Is Our Intermediary

Rabbi Yaakov Joseph of Polnoy, Russia, a student of the Baal Shem Tov (founder of the Hassidic movement), described a mediator as “the means by which heaven reaches the people.

“On the other hand, he is the means by which the people reach heaven. He brings heaven to earth and raises earth to heaven.”

The Messiah to come would be a “Prophet like Moses” (Deuteronomy 18:15), including the role of mediator.

The Apostle Paul wrote, “There is one God, and one mediator between God and men, the man Messiah Yeshua.”  (1 Timothy 2:5)

Rabbis within the Chabad community wrote that the connection between a Rebbe (head Rabbi of a Hassidic movement, of which there are many Rabbis) and his followers is felt so deeply that the devoted disciples believe they cannot pray without being “infused with the concept that the Rebbe is the one who is the ‘connecting intermediary.’”  (BeisMoshiach, Followers of the Chabad Rebbe)

The Apostle John wrote, “We have an Advocate [Mediator] with the Father, Yeshua the Messiah the righteous [tzaddik].”  (1 John 2:1) 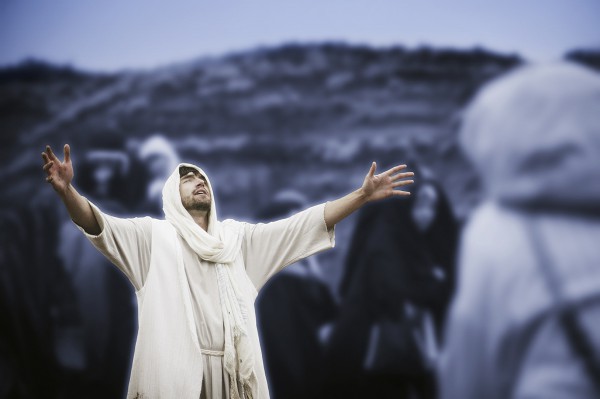 Yeshua prays amidst the people.

The Baal Shem Tov insisted that we must worship God not only when practicing religious acts and holy deeds, but also in our daily affairs, in business, and in social contacts, for when a “man is occupied with material needs, and his thought cleaves to God, he will be blessed.” (Ketonet Passim (1866), 28a)

And yet, “Service of God is nothing without [clinging to] the True Tzaddik,” said Rabbi Nachman.  (Likutey Etzot, 255)

Rabbi Shaul, the Apostle Paul agrees with this sentiment, saying,

“Whatever you do, in word or deed, do everything in the name of the Lord Yeshua, giving thanks to God the Father through Him.”  (Colossians 3:17)