Patience Is an Action Word! 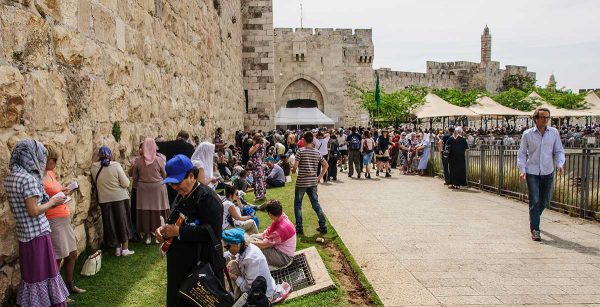 People waiting at the Jaffa Gate of Jerusalem’s Old City.

Waiting is a common word throughout the Bible, but patience is found much less often.

In the Tanakh (Old Testament), it is only mentioned three times.  And, yet, that is how we are supposed to wait for the Lord — patiently.

Understanding these three occurrences will help us to wait patiently on the Lord as we pray for His perfect plan to unfold in our lives. 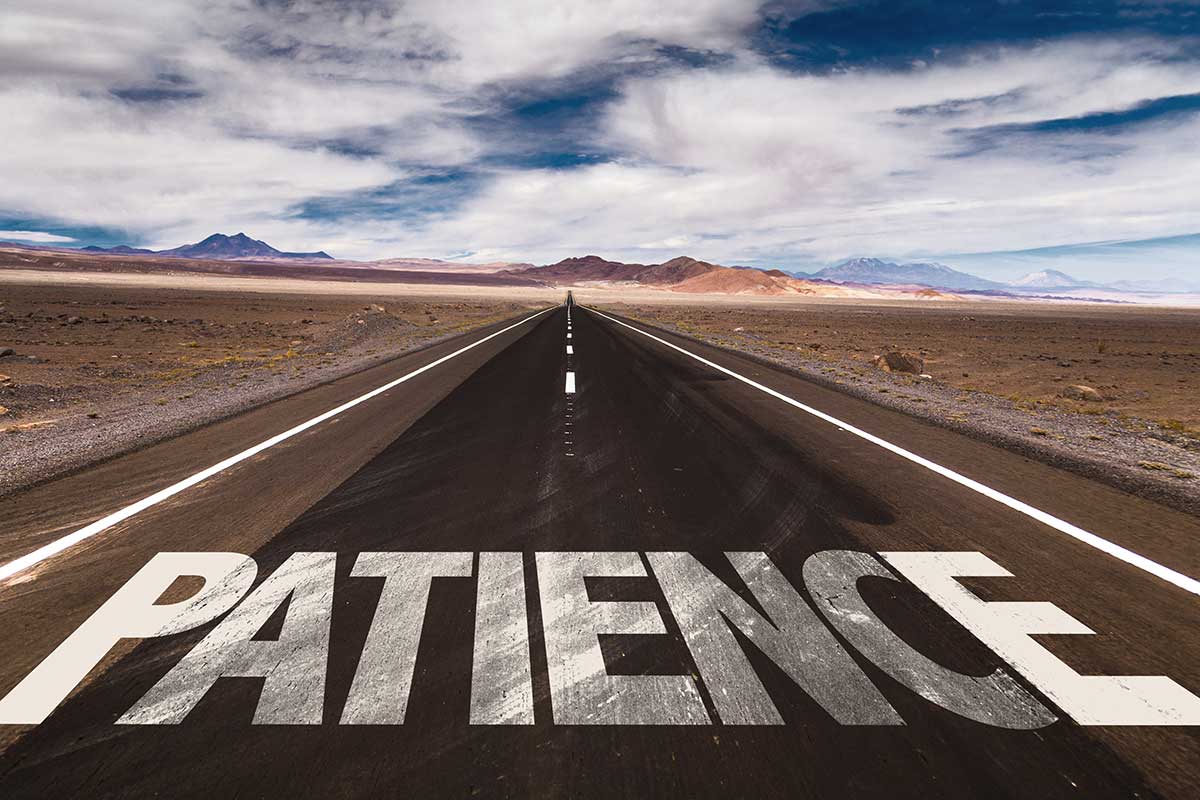 The Hebrew word in this verse for waiting patiently is chool ( חוּל ).

But the other 59 times that chool is written in the Bible, it is usually translated as to whirl, twist, twirl, dance or even to writhe in pain such as in childbirth.

This helps us understand that as we wait patiently for the Lord in this life, there will be joy mixed with pain, as there is for women in the process of childbirth.

So, how do we wait so patiently through it all?

King David, like us, waited on the Lord through many kingdom battles and personal troubles.

Perhaps as a way to help himself stay on the right track, David wrote the word chool ( חוּל ) in Psalm 37 as a command:  “Wait Patiently!” 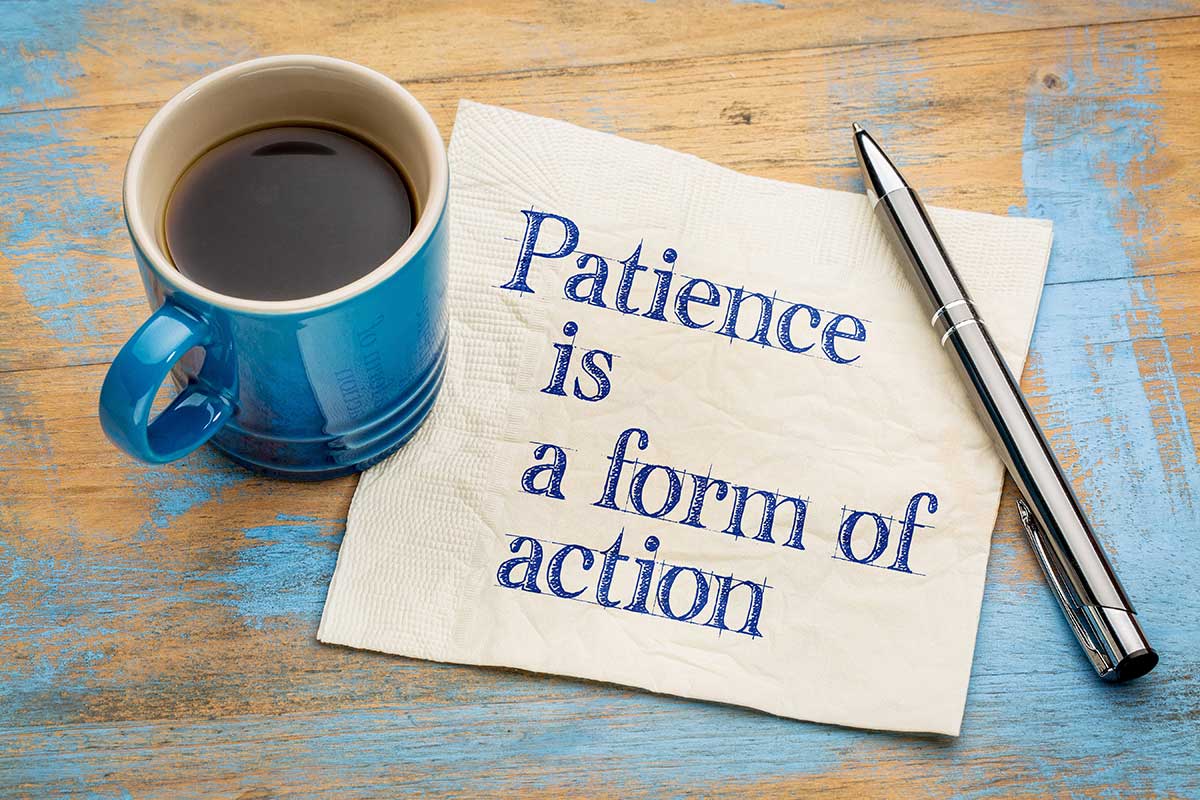 David also wrote it in a way that indicates he took personal responsibility to ensure he waited patiently.

He does this by using a very rare Hebrew form that means doing an action to oneself (the reflexive Hit’pael stem).

David took this kind of personal responsibility again when after the Amalekites took two of his wives captive and wanted to stone him, David  “encouraged himself in the LORD his God”  (1 Samuel 30:6). 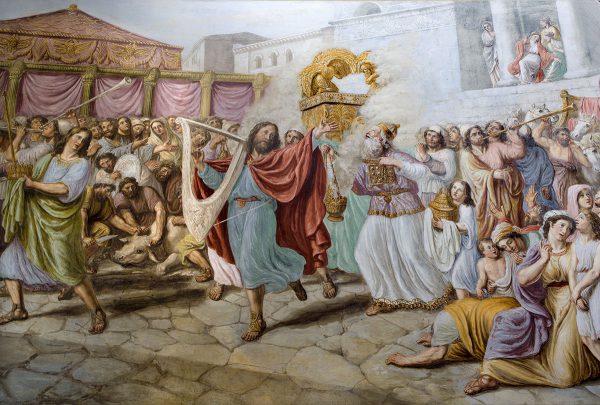 The Singing and Dancing David (painting in a Florence church)

David did what he needed to do in order to stay encouraged while waiting patiently on his Lord.  As a musician he wrote the psalms.  He played instruments and danced.  He prayed and fasted.

Everyone will experience inconveniences and writhing pain in this world.

The Jewish apostle Paul says,  “We must go through many hardships to enter the kingdom of God”  (Acts 14:22).

As we patiently wait to enter our eternal home, it is our responsibility to take care of our minds, emotions, and spirit by feeding on God’s Word and spending time in prayer and praise. 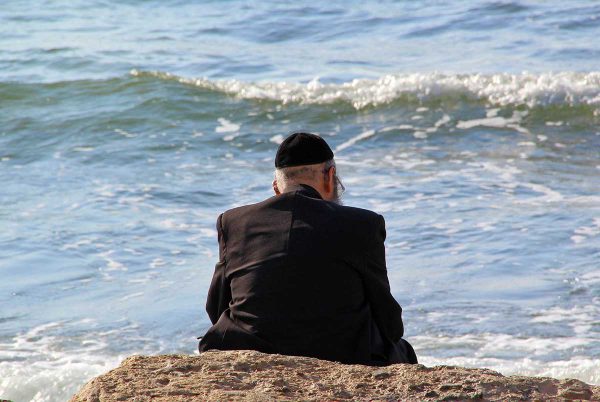 Orthodox Jewish man looks out over the Mediterranean Sea.

The second time the word patiently appears in the Tanakh is in another psalm written by David. The word is kavah ( קָוָה ).

Similar to chool, the word kavah can mean to stretch and twist — again invoking images of childbirth.

But kavah is most often translated into English as hope.

To have hope is to trust that something will happen.  In Psalm 40, David had hope that the Lord would hear his cry.  But there is much more to this passage than just waiting patiently or hopefully.

It actually should read:

(This Hebrew verb form is called the infinitive absolute and does not appear in any other language.)

In God’s Holy language of Hebrew, the action word kavah is repeated twice, to deeply intensify the meaning.  This is key to strengthening ourselves as we wait.

Sometimes, we have to wait — and wait again. 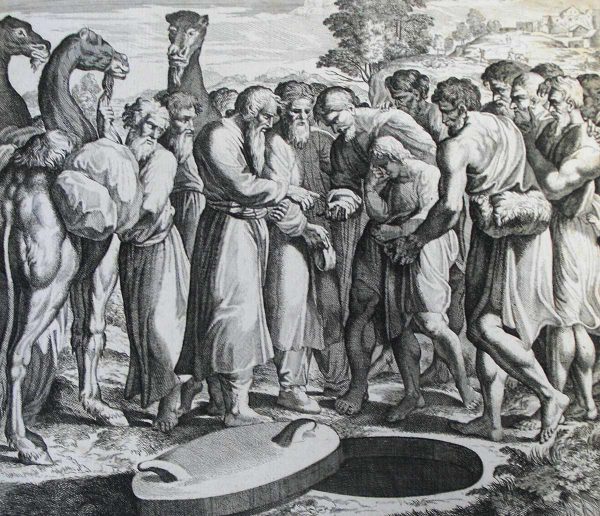 Joseph consigned to the pit in Genesis 37:28 (The Phillip Medhurst Picture Torah 177)

Two types of pits:  first his brothers put him in a pit to be sold;  later he was falsely accused and put in an Egyptian jail.

Two supernatural ways of experiencing dreams:  he had his own dreams and he was able to interpret dreams.

Joseph is a classic example of waiting and waiting again.

And he did so responsibly by being a good steward of his Egyptian slave owner’s household, respecting his wife (even in the midst of her false accusations against him); and helping his fellow prisoners by interpreting their dreams.

Through it all, Joseph never gave up hope of being set free and restored to his family. 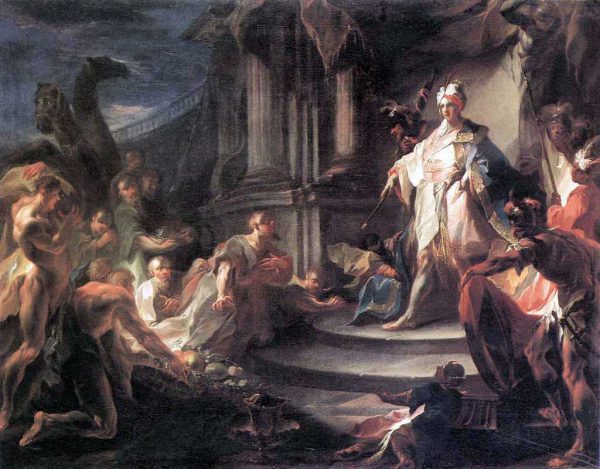 Joseph and His Brothers in Egypt (c. 1600), by Abraham Bloemaert

The verb kavah ( קָוָה) is also the root of the word Hatikvah (הַתִּקְוָה), meaning The Hope, which is the title of a song that became Israel’s national anthem.

Its lyrics describe the patient hope of the Jewish People to be restored to the land of Israel, where they can live under God’s protection and freedom.

Eventually, this freedom will be spiritually realized through Messiah Yeshua (Jesus) as King of all Creation reigning from the New Jerusalem. 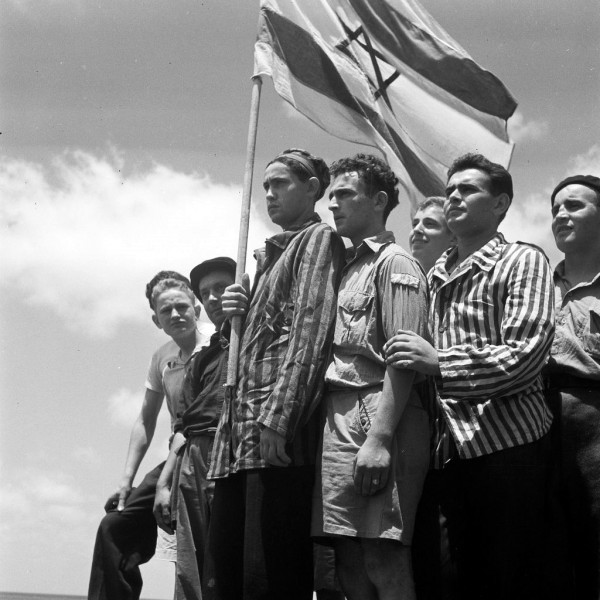 Buchenwald Concentration Camp survivors arrive in the port of Haifa in 1945. One of the first things new immigrants did when first sighting the Land of Israel was to sing HaTikvah (GPO photo by Kluger Zoltan).

Waiting in the Spirit

“The patient [arech] in spirit is better than the proud in spirit.”  (Ecclesiastes 7:8)

Wisdom tells us that waiting slowly, patiently in the spirit is better than being proud in spirit.

The word patient here is arech ( אֶֽרֶךְ), but is often translated as slow or longsuffering — a character trait of God Himself.

When we place our trust in anything other than God, we assume that we know better than the Lord’s own process and timing — and this reveals our pride.

We can wait trusting that the Lord knows all things.  Or we can be disobedient and take matters into our own hands to “fix” the situation, excluding us from the wait.

According to the Jewish sages, this is what Joseph did in prison.  While he waited responsibly, again and again, trusting in the Lord to see him through every day, Joseph relied on Pharaoh’s butler to help him get out of prison.

“But when all goes well with you [the Butler], remember me and show me kindness;  mention me to Pharaoh and get me out of this prison,”  said Joseph in Genesis 40:14. 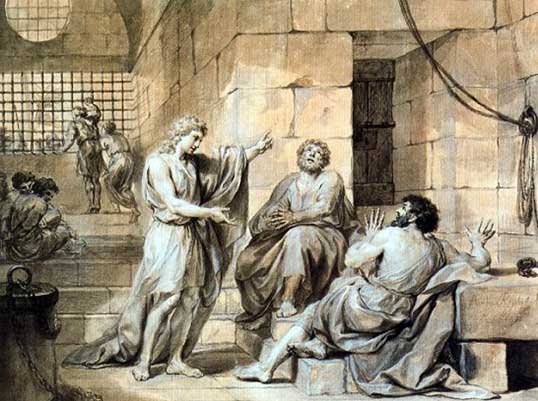 Joseph in Prison, by Anton Rafael Mengs (1728–1779) depicts Joseph interpreting the dream of the butler (Genesis 40).

Though God may have put the butler in Joseph’s path to help him get out of jail, the sages say that Joseph put his trust in the butler for his redemption and not God.  And because he did this, they believe that his prison sentence lasted an extra two years (Genesis Rabbah 89:2).

On the other hand, it could simply be that Joseph had more spiritual and personal growth to do until the Lord in His timing, brought him out of prison two years later.

Nevertheless, the lesson for us, say the sages, is that even though we are to pursue opportunities before us on the path God has for us, we cannot know for sure if it is God who has placed that opportunity there.

So, at all times, we are to trust the Lord for the outcome of every situation and every opportunity we pursue.

The sages look to Jeremiah for this guiding principle:  “Blessed is the man who trusts in the LORD and whose trust is the LORD”  (Jeremiah 17:7).

When pride starts to fester, and we trust in ourselves or others more than God, we need to ask God to create a patient character in our hearts. 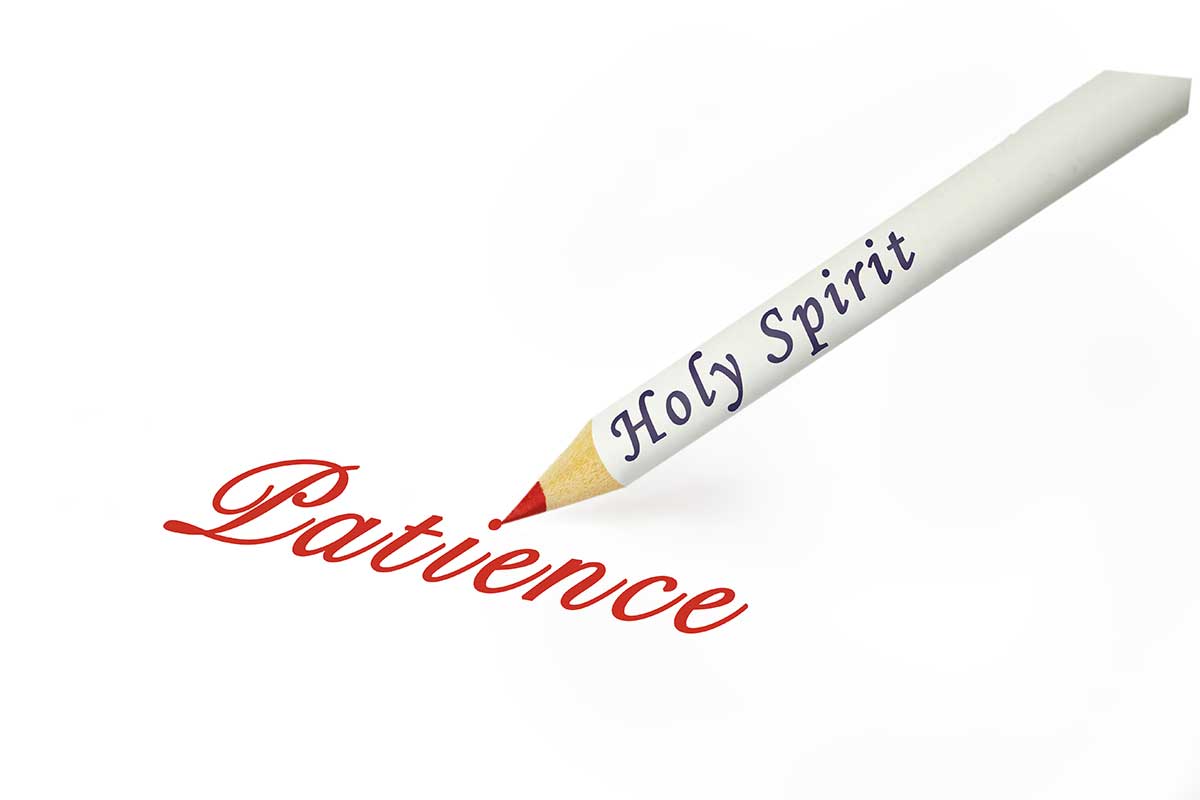 We are also to look for people who have Holy Spirit patience so we can “imitate those who through faith and patience inherit the promises”  (Hebrews 6:12).

God Himself is the most excellent person to imitate.  After all, every time He is described in the Hebrew Scriptures as “slow to anger and full of mercy” (Exodus 34:6), it is this verb arach (אָרַךְ ) that is used.

The Lord is patient!

And Yeshua is patient! He knows our lives will endure many sorrows, because He experienced it Himself.  But He encourages us to wait patiently for Him as he waits patiently for us.