For the first time ever, a special Knesset subcommittee convened for an in-depth examination of the Jewish right to pray on the Temple Mount, Judaism’s holiest site, which while under Israeli control has been administered by the Muslim Waqf. 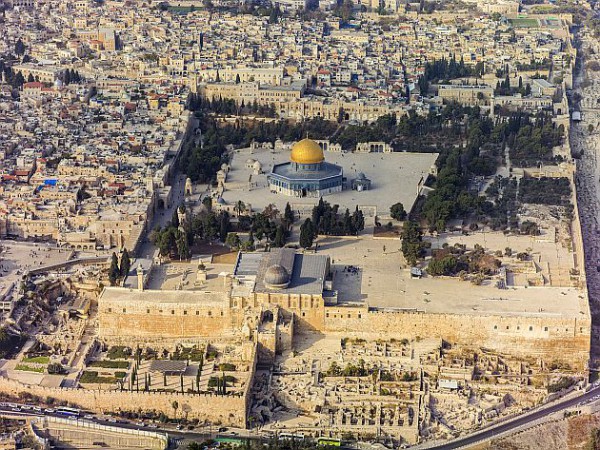 A southern aerial view of the Temple Mount on which the First and Second Temples once stood.  While the Mount is the holiest site in Judaism, it is third holiest site in Islam after Mecca and Medina.

“Even if they do not accept everything that is said, my feeling is that until today, no one ever really heard our version of things,” Rabbi Yehuda Glick, a Liba Project coordinator for Jewish Rights on the Temple Mount, wrote on Facebook this Monday.  “Who knows, maybe we will succeed in advancing one more step toward human rights—for Jews on the Temple Mount, too?”  (Israel National News)

Glick, who is on a hunger strike because he has been banned from the Temple Mount, has asked his Facebook followers to pray as the in-depth study proceeds.

“April is my busiest month,” he told the Knesset subcommittee on Monday.  “I was supposed to lead 20 groups on a visit, and I had to cancel them all.  I am on a hunger strike because I expect the members of the committee to do something about this.”

Although no Israeli law bans Jewish prayer, the Jordanian Waqf prohibits Jewish lips from moving in prayer on the Mount, maintaining strict enforcement.

The Waqf’s administrative role is aided by the presence of Islam’s eagle-eyed faithful and the security role of Israeli police, who seemingly aim to diffuse explosive situations on Har haBeit (the Temple Mount) before there is a chance that they develop.

Therefore, Jews who pray or appear to be praying are arrested and escorted away.

“The police are afraid, and do not allow the entry of more than 20 to 30 Jews at once,” Glick said.  “Hundreds of Jews wait an hour, two hours, and even three hours in the hot sun at the entrance, raising tensions.”  (Algemeiner)

He wrote on Facebook that “at the entrance the guard in the guard booth informed me that by the order of the commander I was forbidden from entering the Temple mount, with no trial, no warning.”  (Israel National News) 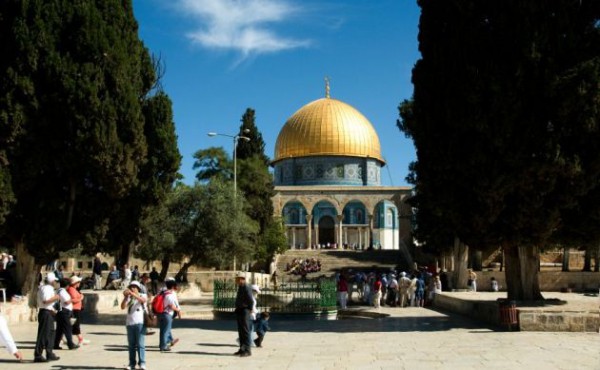 Tourists on the Temple Mount

Glick, of course, is not the only Jewish person barred from the Temple Mount. Recently, Jewish Parliament member Michael Ben-Ari was forbidden entry to the site.  As well, on March 20, Parliamentarian Moshe Feiglin visited the Mount with a police escort and was pelted by rocks thrown by Palestinians.

“If there is a reason that the Temple Mount is in an explosive situation, it is because today has proven that violence pays,” Feiglin said after the confrontation.  (Jerusalem Online)

While applauding the Israeli police for acting professionally and calmly, he said that leaving the Mount to Islamist administration is a “concession to the victory of the violent side, and it invites an escalation in violence.”

“Jerusalem is religion’s trust and history’s trust in the hands of all Muslims, in the hands of this Ummah (Islamic Nation)…  The Al-Buraq Wall (Western Wall) is an authentic part of the Al-Aqsa Mosque only,” he said on Official PA TV, December 6, 2013.  (Palwatch)

Such statements fly in the face of the well-documented history of the Jewish People in Jerusalem as well as the Biblical declarations that God chose the Temple Mount for His dwelling place.  (Isaiah 8:18; Zechariah 8:3)