Do the Palestinians Descend from the Philistines? DNA Tests from First Philistine Cemetery Will Tell

“‘I will destroy the king of Ashdod and the one who holds the scepter in Ashkelon. I will turn my hand against Ekron, till the last of the Philistines are dead,’ says the Sovereign Lord.”  (Amos 1:8)

For the first time ever, a Philistine cemetery has been found during excavations at the Ashkelon tel (hill) on the southern coast of Israel.  DNA testing will either prove or disprove the longstanding scientific belief that these ancient people originated from the Aegean Sea, which hosts a collection of up to 6,000 islands and islets between the coasts of Greece and Turkey.

One of five Philistine cities named in the Bible, Ashkelon, was destroyed by Nebuchadnezzar’s army in 604 BC, notes National Geographic Magazine, allowing for an abundance of evidence to sink into the Earth for discovery today.

The archaeological remains at the tel cemetery further dismiss the deceptive claims by the Palestinian leadership that the Palestinians are descendants of these non-Semitic Aegean migrants.

Referring to Genesis 21:34, the Bible says that Abraham “dwelt many days in the land of the Philistines.”  But we know that Palestinians are Arabs whose father is Abraham primarily through Ishmael, but also through Abraham’s other wife Keturah and through Abraham’s nephew, Lot. 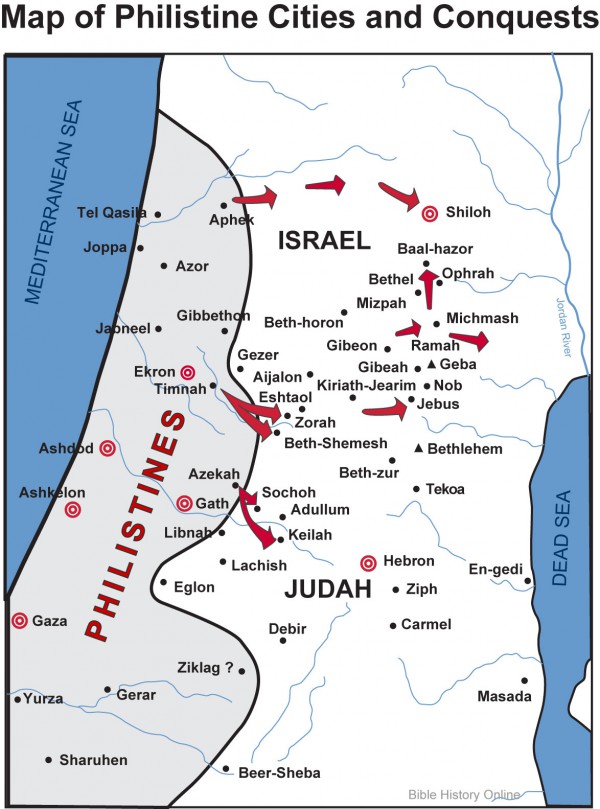 The Philistines expanded throughout the Eastern Mediterranean coast in the 10th century B.C. and continued to expand eastward toward Jerusalem, but God gave David the strategy and strength to defeat them as king just as he defeated the Philistine giant Goliath as a youth. (Source: Bible-History)

Because of the Philistine presence along the eastern Mediterranean shoreline, these coastal lands were called “Philistine Syria” in 500 BC by the Greek Emperor Herodotus.

But in 135 AD, the Roman Emperor Hadrian spitefully dubbed the inland province of Judea “Provinica Palestina” as a way to replace the Jewish heritage of all Israel with the heritage of Israel’s foreign enemies.

These enemies later included the Arab followers of Muhammad, who entered the Land of Israel in AD 637.

The name of Palestine has remained attached to the Holy Land even to this day, although no Palestinian nation, king, president, or flag ever existed here until after Israel became a nation in 1948.  Nevertheless, the Jews who lived in the British mandate of “Palestine” were also labeled Palestinians.

With skeletal remains of the Philistines now accessible and results of DNA, radiocarbon and biological distance studies pending, archaeologists will be able to explicitly distinguish between the migrants of the Grecian and Turkish island masses who made their home in Ashkelon, and the Jordanians, Syrians, and Egyptians who claim ancient Philistine identity today.

What has been concluded so far is that this well-preserved cemetery presents differing burial practices.

Whereas the ancient Canaanites and Israelites buried their dead in cave tombs, to later collect the bones, the Philistines notably cremated their dead or buried them in pits or a type of multi-chambered tomb that, thereafter, was not disturbed — showing “different cultural ideas about what death meant and what the afterlife meant,” according to the excavators.

Over 211 skeletons have been found inside these pits and tombs, most without any burial goods with them, but a few have small oil jugs, weapons, and jewelry on or near them. 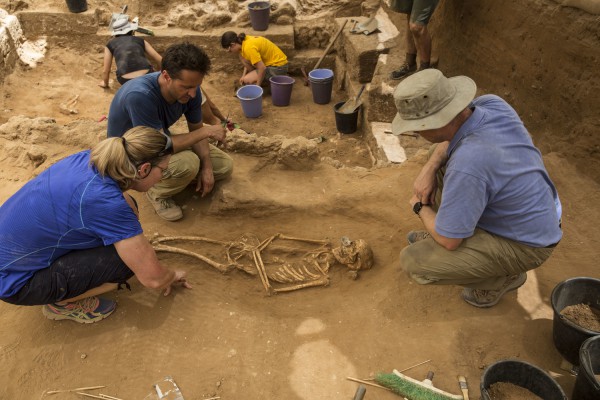 Archaeologists study a 10th-9th century BC burial in the excavation of the Philistine cemetery by the Leon Levy Expedition to Ashkelon. While many bodies were buried alone, some were found with personal items such as this perfume vile placed at the nose of the deceased. (Photo Credit: ©Tsafrir Abayov/Leon Levy Expedition)

Overall, the cemetery will provide historians with “a critical missing link … to fill out the story of the Philistines,” one of the heads of the excavation project, Professor Daniel Master, said to the press.

“As we look at the distinctive burial practices, we get a sense for how they treated and thought about death and the afterlife in different ways from the people around them,” Master said.

Furthermore, as the Leon Levy team dusts off and measures the bones, observing how and where they are buried, “we’re going to be able to reconstruct what the Philistines as a group were like,” Master said.

Prior to this discovery, there has been “no systematic example of what they thought about death and how they treated people in that process,” he added.

The cemetery find will complete a historical picture that is already made up of the Philistines’ houses and trade routes.  In fact, according to Master, after 30 years, “we’ve uncovered all aspects of their culture.” 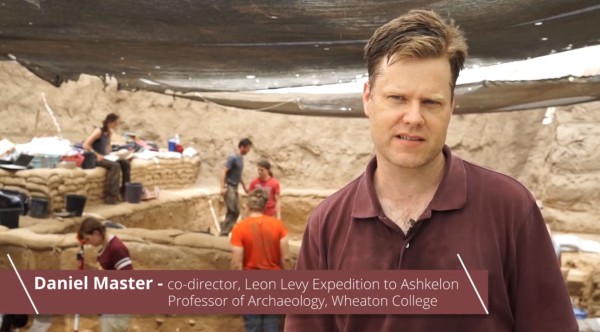 A professor of archaeology at Wheaton College in Illinois, Master co-leads the Leon Levy Expedition to Ashkelon with professor of Israel archaeology Lawrence Stager, who also directs the Semitic Museum at Harvard University.

The Leon Levy Expedition began in 1985, bringing Mr. Leon Levy and Ms. Shelby White from New York to Ashkelon until year 2000.  The expedition continues to attract about 80–100 volunteers a year, including experts in a variety of relevant fields where they are trained in the science of archaeology.

“In addition to learning stratigraphic excavation and recording methods in the course of digging, the volunteer staff participated in evening lectures and weekend field trips to archaeological sites throughout Israel,” states the DigAshkelon website.