Parasha Ha’azinu (Listen): Finding Victory in the Song of Moses

Last week, in Parasha Nitzavim–Vayelech, Moses transferred the mantle of leadership to Joshua. It would be Joshua who would cross the Jordan River with the Israelites and lead the people of Israel into the Promised Land.

This week’s Torah reading, Ha’azinu, which may be translated as give ear, meaning listen attentively, consists primarily of the 70-line Song of Moses, which is both a love song to God and a chastisement of the people.

In this song filled with poetry, prose and metaphor, Moses recounts the blessings that God has bestowed upon the people and the wicked deeds they have committed, as well as God’s just response to those deeds.

“For I proclaim the name of the LORD:  Ascribe greatness to our God.  He is the Rock, His work is perfect; For all His ways are justice; A God of truth and without injustice; Righteous and upright is He.”  (Deuteronomy 32:3–4) 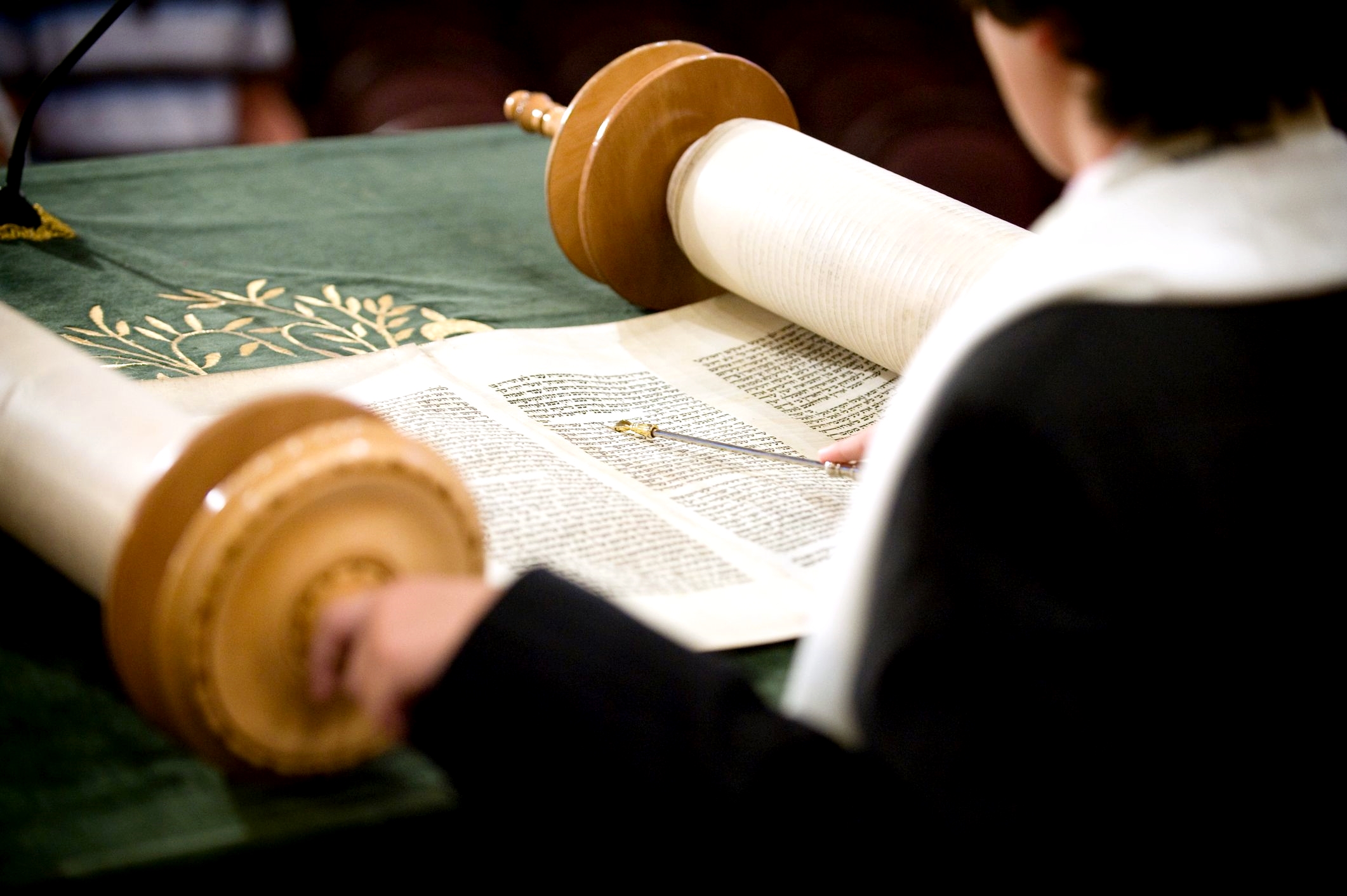 In this Parasha, Moses is making his final address to the nation.

Moses asks, not only for the attention of the people of Israel, but of all creation.

At the conclusion of the Parasha, after Moses finishes this address, God tells him to climb Mount Nebo.  From this height he will only view the Promised Land.  The Lord will not allow him to enter it because he failed to uphold the holiness of God in front of the entire nation of Israel.  (Numbers 20:6–12)

“Therefore, you will see the land only from a distance; you will not enter the land I am giving to the people of Israel.”  (Deuteronomy 32:52)

Moses died in Moab on the mountain. 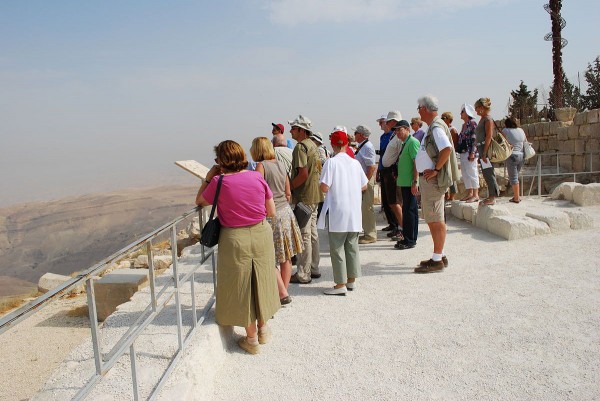 Pilgrims and tourists consider the view from Mount Nebo.

Nearing the end of his earthly life, Moses delivers his final message as a “melodic farewell.”

This seems an odd time for Moses to be singing. After all, practically the entire generation that he brought out of Egypt lay dead—their bodies buried throughout the wilderness, and Moses, himself, stands ready to die, as well.

Nevertheless, in his lyrics, we see evidence of the spiritual greatness of this leader of Israel.  The same personal tragedies and hardships that Moses experienced would likely have broken the spirit of a lesser man, but they have caused Moses to reach even greater spiritual heights.

Moses sings despite his impending death.  Despite the fact that he failed to achieve his life’s goal of entering the Promised Land, Moses still sings.  Likewise, we may also refuse to succumb to despair over the trials of life through the ministry of song.

“Sing joyfully to the LORD, you righteous; it is fitting for the upright to praise Him.  Praise the LORD with the harp; make music to Him on the ten-stringed lyre.  Sing to Him a new song; play skillfully, and shout for joy.”  (Psalm 33:1–3) 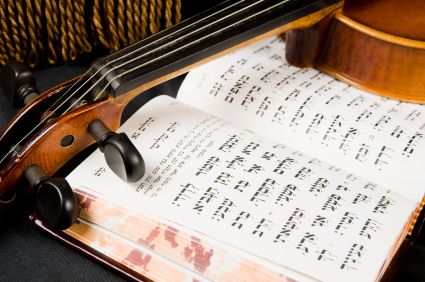 A Hebrew Book of Psalms (Tehillim)

When we go through a time of weakness and don’t even know how we can serve the Lord in our condition, we can still minister to Adonai through praising, singing and making music to Him.

Throughout Scripture, many Hebrew words and phrases contain secret and additional deeper meanings.  We can discover the power of praise and worship music by using this method of investigation.

Many of the Psalms (called Tehillim in Hebrew) are addressed, “To the Chief Musician.” In Hebrew, the chief musician is called a menatzeach (מנצח).  The root of this word is netzach (נצח), which means eternity.

Even more marvelous is that the Hebrew word for victory is nitzachon (נצחון), which comes from the very same Hebrew root!

As worshipers of the one, true God, when we minister to Adonai with music and song, we touch the eternal realm and from this heavenly place, we receive the victory.  Hallelu–Yah!  (Praise God!)

“Now thanks be to God, who always leads us in triumph in Messiah, and reveals through us the sweet aroma of His knowledge in every place.”  (2 Corinthians 2:14) 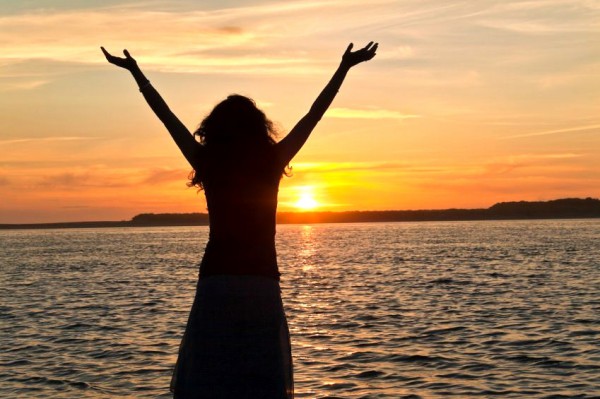 We can overcome the temptation to wallow in discouragement when we fail to reach our goals or when things don’t seem to go our way, by singing the praises to the Lord instead. In doing this, we will walk in triumph in Yeshua (Jesus).

Some Believers in Yeshua may be under the impression that Moses, as part of the “Old Testament” is not really relevant to their faith; however, in the Book of Revelation, we read that Moses continues to be relevant and will continue to be.

In the end of the final battle with evil, those who have been victorious over the beast and its image will hold harps and sing the Song of Moses.

“I saw in heaven another great and marvelous sign: seven angels with the seven last plagues—last, because with them God’s wrath is completed.  And I saw what looked like a sea of glass glowing with fire and, standing beside the sea, those who had been victorious over the beast and its image and over the number of its name.  They held harps given them by God and sang the song of God’s servant Moses and of the Lamb:”  (Revelation 15:1–3) 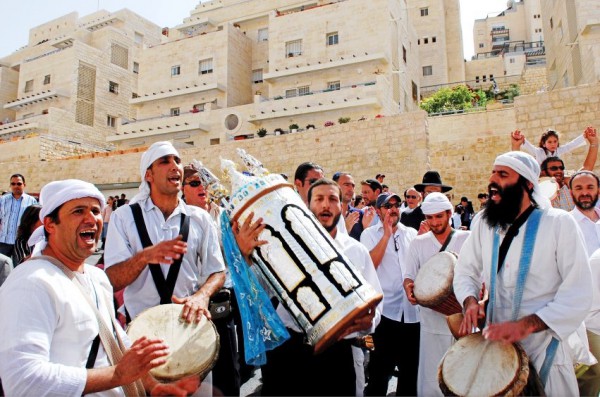 Rejoicing over a new Torah scroll in Jerusalem

Moses’ song in this Parasha also acts as a witness to a rebellious people by reminding them of the days of old and of the goodness of God toward the children of Israel.

“Remember the days of old; consider the generations long past.”  (Deuteronomy 32:7)

God found Israel in a desert land and made them into a nation. He chose them as His very own people, guarded them as the apple of His eye, and gave them a land flowing with milk and honey.

“In a desert land He found him, in a barren and howling waste. He shielded him and cared for him; He guarded him as the apple of His eye.”  (Deuteronomy 32:10) 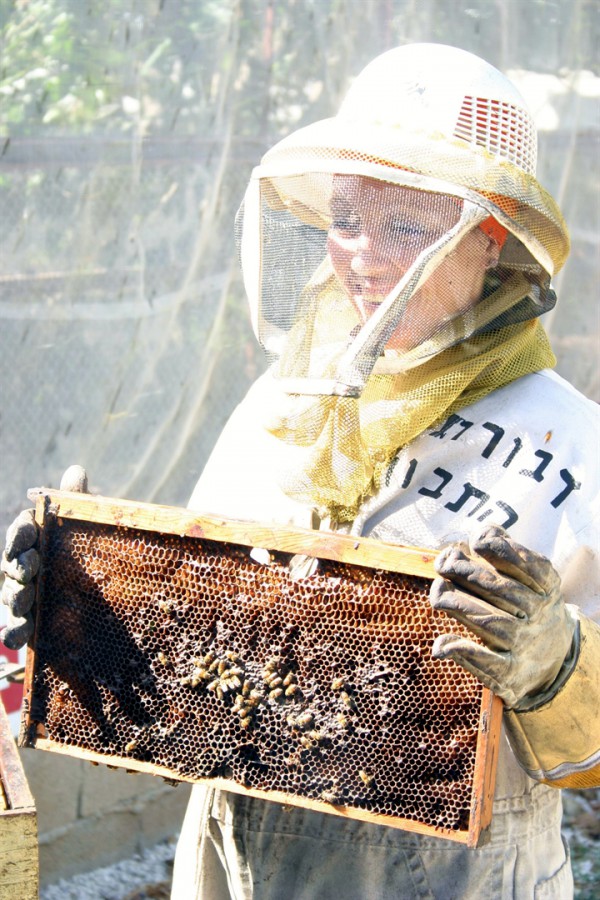 A visit to a honey farm in the Lower Galilee region of Israel.  (Photo: Go Israel)

In spite of all the good God had done for Israel, they still turned against Him and committed idolatry by worshiping and turning their hearts toward other gods.  The Torah is truthful about the faults and failures of Israel, and yet continually reminds us of God’s love and His power to deliver.

Under God’s faithful hand, Israel prospered, but instead of praising God and thanking Him for His goodness, they abandoned Him.

“Yeshurun [a poetic name for Israel meaning the upright one] grew fat and kicked (you grew fat, thick, gross!).  He abandoned God his Maker; he scorned the Rock, His salvation (Yeshua).”  (Deuteronomy 32:15)

Because of their sin and unfaithfulness, God hid His face from the very people who were chosen to reflect His goodness and share His salvation to a lost world.

Because of their rebellion, all manner of calamities would come upon them, including famines, pestilence, plagues, terror and the sword.  Many would die, from young men and women to infants and the elderly.

“‘I will hide My face from them,’ He said, ‘and see what their end will be; for they are a perverse generation, children who are unfaithful.’”  (Deuteronomy 32:20) 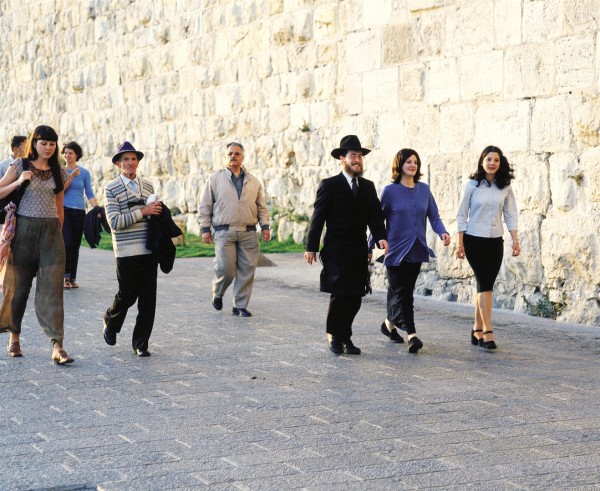 People walk along the walls of the Old City of Jerusalem.  (Photo: Go Israel)

God Can and Will Bring Israel Back to Life

Even though God is the One who judges sin and can destroy and cause death, He can also heal and restore.  He is God and there is no other.

This promise and those in the prophetic portion assure us that God is not finished with Israel, as so many in the world declare.

Although He abandoned her for awhile, His covenant with Abraham through Isaac and Jacob is everlasting.

God confirmed that covenant to Jacob while he slept:

“I am the LORD, the God of your father Abraham and the God of Isaac; the land on which you lie, I will give it to you and to your descendants. …  Behold, I am with you and will keep you wherever you go, and will bring you back to this land; for I will not leave you until I have done what I have promised you.”  (Genesis 28:13–15) 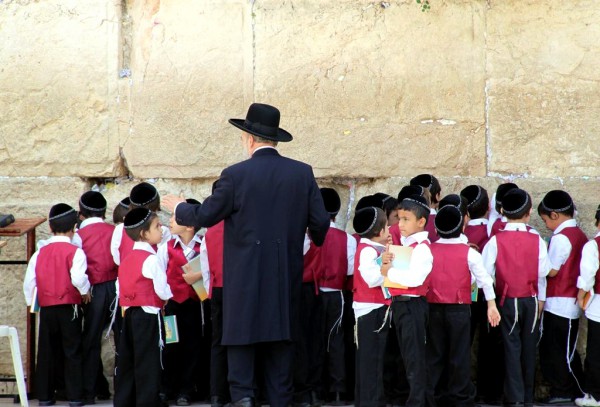 In the Haftarah (prophetic portion), the prophet Hosea, who lived 700 years after Moses sang his song of faithfulness, opens with Shuvu Yisrael (Return O Israel).

As a man betrayed by his unfaithful wife, the prophet Hosea could personally identify with God’s pain and suffering caused by the wandering of His beloved Bride, Israel.

This Haftarah portion reminds us, however, that for those who genuinely repent and turn from their wickedness, God’s anger is not forever.  He forgives repentant hearts and will bring them healing and reconciliation.

“Return to the Lord.  Say to Him:  ‘Forgive all our sins and receive us graciously, that we may offer the fruit of our lips….  I will heal their waywardness and love them freely, for my anger has turned away from them.  I will be like the dew to Israel; he will blossom like a lily.”  (Hosea 14:2, 4–5)

Another prophet, Micah, confirmed this:

“Who is a God like you, who pardons sin and forgives the transgression of the remnant of his inheritance?  You do not stay angry forever but delight to show mercy.  You will again have compassion on us; you will tread our sins underfoot and hurl all our iniquities into the depths of the sea.  You will be faithful to Jacob, and show love to Abraham, as you pledged on oath to our ancestors in days long ago.”  (Micah 7:18–20) 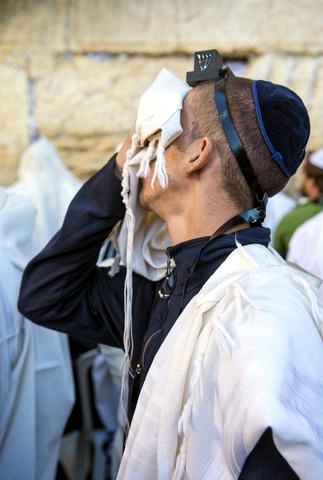 A Jewish man wearing tefillin (phylacteries) recites selichot (prayer for forgiveness and mercy) at the Western (Wailing) Wall during the Days of Awe.

The oath that the Lord pledged to Abraham and his descendants (too numerous to count) is the same oath He gave to Isaac and Jacob—to give them a land for an everlasting possession.

And the prophet Joel tells us that before the great Day of the Lord, God will restore His people to His land to prove to the world that He will keep His covenant with Abraham, Isaac, and Jacob, lest the world mock Him:

“Spare your people, Lord.  Do not make your inheritance an object of scorn, a byword among the nations.  Why should they say among the peoples, ‘Where is their God?’  Then the Lord was jealous for His land and took pity on His people.”  (Joel 2:17)

Today, in fulfillment of the Song of Moses and countless Bible prophecies regarding the return of the Jewish People to the land that God promised to them through Abraham, Isaac and Jacob, Israel is once again an independent nation.

And God’s Chosen People continue to return to their ancient homeland.

Nevertheless, the vast majority of the Jewish People still do not know who to trust for their salvation, which in Hebrew is Yeshua.