Parasha Ki Tisa (When You Take): Moses and the Golden Calf

In the last two parashiot, Terumah and Tetzaveh, God gave detailed instruction on how Israel should construct the Mishkan (Sanctuary) in which He would dwell.

This week’s Torah portion begins with the Lord commanding Moses to take a census of Bnei Yisrael (Sons of Israel).

“Then the Lord said to Moses, ‘When you take a census of the Israelites to count them, each one must pay the Lord a ransom for his life at the time he is counted.  Then no plague will come on them when you number them.’”  (Exodus 30:11–12)

The Hebrew word used for ransom in this verse is koper, which comes from the root K-P-R, or kaphar, meaning “to atone for” as in Yom Kippur, the Day of Atonement.

For the building of the Mishkan, the Israelites were to give whatever their hearts dictated (Exodus 25:2); however, for the census, every person 20 years or older who was counted was to give a half shekel as a ransom for their soul. 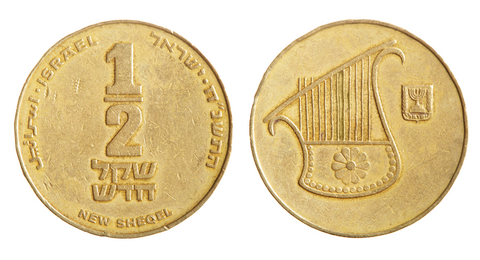 The half-shekel of the modern State of Israel

“Each one who crosses over to those already counted is to give a half shekel.”  (Exodus 30:13)

Rich and poor were to give the exact same amount, and it was to be used for the service of the Tent of Meeting. 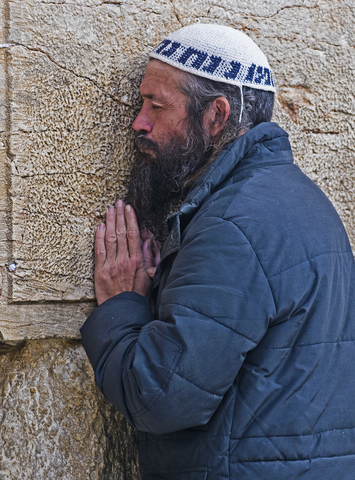 Seeking God at the Western (Wailing) Wall in Jerusalem

Creativity and the Shadow of God

“See, I have chosen Bezalel son of Uri, the son of Hur, of the tribe of Judah, and I have filled him with the Spirit of God [Ruach Elohim], with skill, ability and knowledge in all kinds of crafts.”  (Exodus 31:2–3)

In this Parasha, God designates a man named Bezalel (Betzalel), who has a special calling or anointing, to be in charge of the construction of the Mishkan.

God tells Moses that He has filled Bezalel with His Holy Spirit, wisdom, understanding and ingenuity for all manner of artistic workmanship so that the furnishings of the Tabernacle, the priests’ vestments, the anointing oil, and the incense could be created.

Here in Israel, Bezalel’s name carries such weight that one of the main streets of downtown Jerusalem is named after him.  Also named after Bezalel are schools of art, here in Israel and Jewish academies around the world. 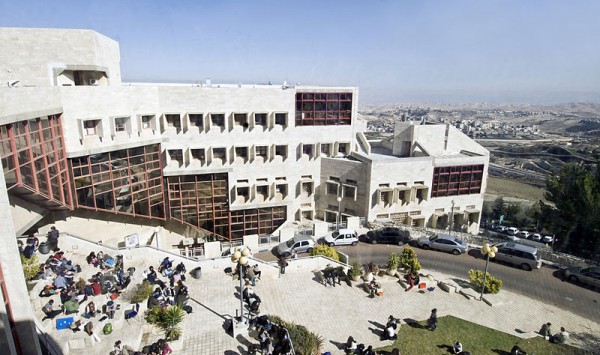 Bezalel Academy in Israel, with the Dead Sea in background.

Bezalel’s name provides a fascinating clue about his gifting.  His name comes from the combination of three Hebrew words: be (in), tzel (shade), and El (God).  It can be translated “in the shadow of God.”

The shade or shadow (tzel) of the Lord is a special place of refuge.

“I will take refuge in the shadow (tzel) of your wings until the disaster has passed.”  (Psalm 57:1)

Yeshua made reference to this place of refuge when He wept over Jerusalem, knowing the calamity that was about to befall the city.

“O Jerusalem, Jerusalem, …  How often I longed to gather your children together, as a hen gathers her chicks under her wings, but you were not willing.”  (Matthew 23:37) 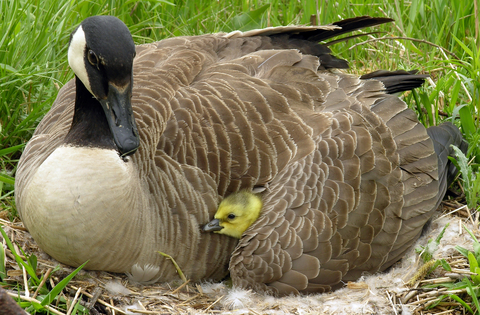 Mother goose with chick under her wing

The desire to hide our children under the shadow of our wings and keep them safe from every threat and danger is often associated with a maternal, protective quality.

Such a connection exists also in Scripture.  God’s name El Shaddai, which comes from the Hebrew word for a woman’s breast, reveals His maternal qualities and is used in Psalm 91 in conjunction with the idea of abiding in His shadow.

“He who dwells in the shelter of the Most High [Elyon] will rest in the shadow [tzel] of the Almighty [El Shaddai].”  (Psalm 91:1) 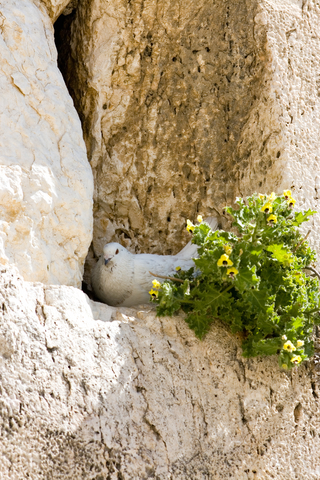 A pigeon rests safely in the rocks of the Western (Wailing) Wall in Jerusalem.

It is interesting that this name, Betzalel, which can be translated as “in God’s shade” was given to the first artisan mentioned in the Bible.

Bezalel reveals that the act of creating can be an act of worship.

Indeed, there is something about creativity and art, the act of creating itself, that seems so holy and close to God.

Our fast paced, goal-oriented modern society doesn’t place much importance on creative pursuits, but the Hebrew language reveals that art and crafting are very closely related to God, who is the ultimate Creator.

Since we are created in God’s image, we are also endowed with creative ability that is just waiting to be released. 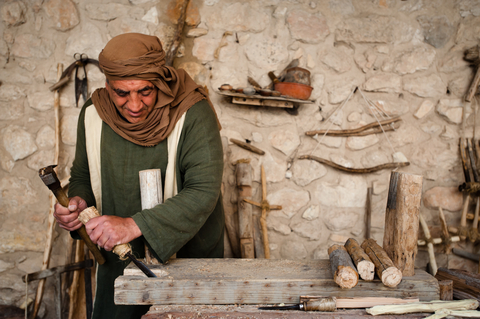 A historical re-enactor serves as a carpenter building furniture using hand tools at Nazareth Village, a historical re-creation of Nazareth as it would have been at the time of Messiah.

The word artist in Hebrew is aman from the Hebrew root A-M-N (aleph, men, and nun), meaning reliable, faithful, confirmed, have faith, and be firm.

These three letters are also the root of the word we use at the end of our prayers—amen, meaning so be it, verily, and truly.

And these same three letters form the word emunah, which means faith.

May this study inspire us to let our creativity flow and no longer consider artistic endeavors non-productive” or a waste of time.

If we just look at the amazing variety of colors and incredible designs in the natural world, we can see that God values beauty for its own sake, and He enjoys the process of creating. 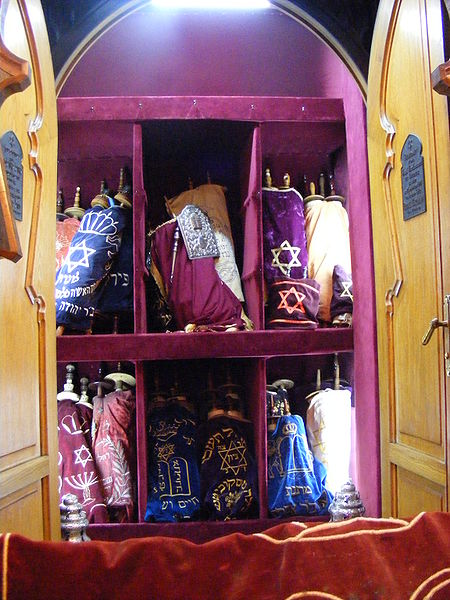 Building the Tabernacle Around the Shabbat

“The Israelites are to observe the Sabbath, celebrating it for the generations to come as a lasting covenant.”  (Exodus 31:16)

The work of building the tabernacle was an immensely important task!  And yet, in the midst of the instructions to build it, God reminds the Israelites to keep the Sabbath (Shabbat)—to rest.

As important as any of our works are, even for the Lord, resting on Shabbat takes precedence.

Even the work of God was not permitted to be elevated above the command to rest on the Sabbath.

It is to be observed as a perpetual covenant, throughout time and generations.

Why is keeping Shabbat so important?  Because it’s a special sign between God and His people.

“It will be a sign between me and the Israelites forever, for in six days the Lord made the heavens and the earth, and on the seventh day He rested and was refreshed.’”  (Exodus 31:17) 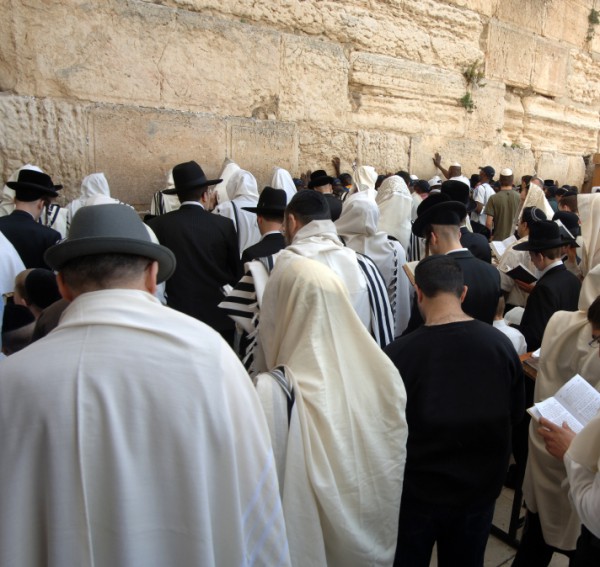 Prayer at the Western (Wailing) Wall:  Scripture prohibits doing melakhah on Shabbat.  Although melakhah is commonly translated “work,” a better definition is deliberate activity involving creativity or exercising control over the environment.

Keeping the Shabbat is a sign that we are in a covenant relationship with the Almighty God.  We are a peculiar people!

While many stay busy seven days a week, the Jewish People are to work only six days and rest on the seventh, just as the Creator rested on the seventh day.

For this reason, most of the convenience stores here in Israel are not open 24/7, but 24/6.  Hallelujah! 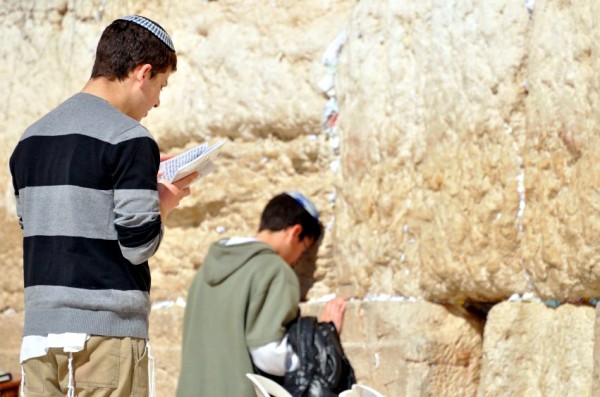 Jewish youth pray in Jerusalem at the Western (Wailing) Wall, a remnant of the wall that once surrounded the Second Temple.

By honoring Shabbat, we honor God.  He will bless us for our obedience and for putting Him first.

The question remains: does this apply to non-Jewish or Gentile Believers?

When it comes to the Shabbat for foreigners (non-Israelites) who have joined themselves to the Lord (through the blood of Yeshua the Messiah), the Word of God is not silent:

“And foreigners who bind themselves to the Lord to serve Him … who keep the Sabbath without desecrating it and who hold fast to My covenant—these I will bring to My holy mountain and give them joy in My house of prayer … for My house will be called a house of prayer for all nations.”  (Isaiah 56:6–7)

Replica of the Second Temple

We now come to the account of the shameful sin of our Israelite ancestors and the idolatrous golden calf.

When Moses was on Mount Sinai with God, he stayed longer than expected, so the people “gathered around Aaron and said, ‘Come, make us gods (elohim—or a god) who will go before us.’”  (Exodus 32:1) 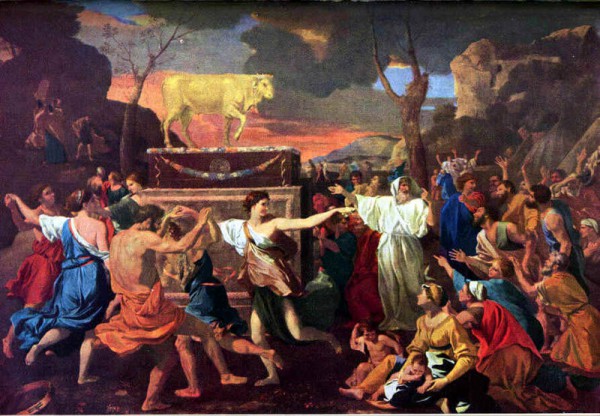 The Adoration of the Golden Calf, by Nicolas Poussin

Thinking the worst had happened to Moses, the Israelites sought a “visible representation” of God to worship.

Because of their idolatry, God became angry with the people of Israel.

So much so that He momentarily disowned them, saying to Moses on the mountain, “Go down, because your people, whom you brought up out of Egypt, have become corrupt.”  (Exodus 32:7)

Although God prepared Moses for what he would find at the foot of the mountain, when Moses saw the people worshiping the golden calf, he smashed the tablets written by the finger of God Himself. 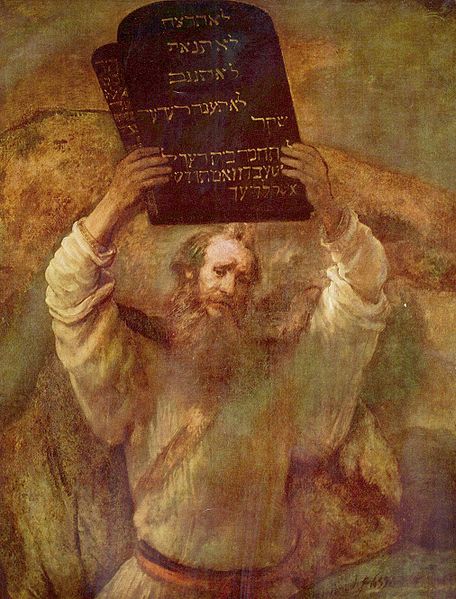 Moses with the Ten Commandments, by Rembrandt

God will never abandon His covenant with the Chosen People, so in His anger, He proposed to wipe out all of the Israelites except for Moses:

“‘I have seen these people,’ the Lord said to Moses, ‘and they are a stiff-necked people.  Now leave Me alone so that My anger may burn against them and that I may destroy them.  Then I will make you into a great nation.’”  (Exodus 32:9–10)

Moses, a true shepherd and the most humble man on the face of the earth, declined God’s offer.

He, instead, reasoned with God that killing the Israelites would cause the Egyptians to think that God led them out of Egypt only to destroy them.  (Exodus 32:11–12)

Then, Moses reminded God of the covenant He made with Abraham, Isaac and Jacob.  (Exodus 32:11–13) 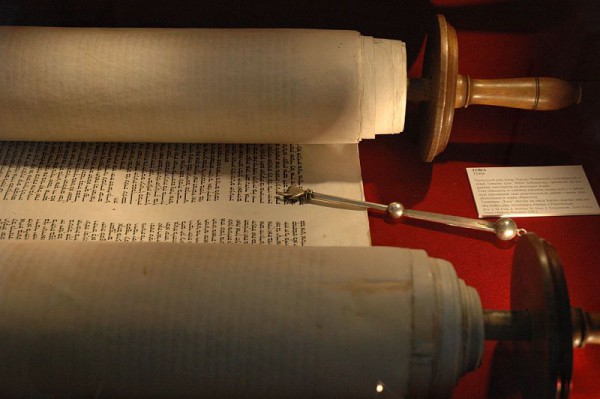 Although Moses understood the covenant very well, today, many people do not understand God’s purposes for the nation of Israel or the nature of His everlasting covenant with them.

Consequently, many in the Church believe that God has disowned Israel because of their sinfulness and has started all over again with the Christian Church.

Paul warned the Gentile Believers to be on guard against this kind of thinking.

He explained that God has not disowned Israel but has only put a temporary blindness upon her until the fullness of the Gentiles may come in.

“I do not want you to be ignorant of this mystery, brothers, so that you may not be conceited:  Israel has experienced a hardening in part until the full number of the Gentiles has come in.”  (Romans 11:25)

Once the fullness has come in, then “all Israel will be saved, as it is written:  ‘The Deliverer will come from Zion; He will turn godlessness away from Jacob.  And this is My covenant with them when I take away their sins.’”  (Romans 11:26–27) 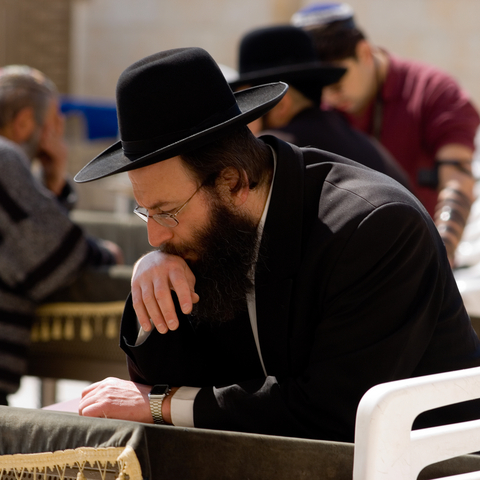 Jewish man praying at the Western (Wailing) Wall in Jerusalem

The Power of Intercession

“Then the Lord relented and did not bring on His people the disaster He had threatened.”  (Exodus 32:14)

Moses’ intercession—his standing in the gap and pleading for divine mercy on a whining, complaining, ungrateful rag tag bunch of people who were sinful, faithless, and disobedient—is nothing short of amazing!

And his prayers made all the difference for Israel.

May we have the same merciful, humble spirit that Moses had and not sit in judgment when we see the sins and faults of others; instead, we must plead that God may forgive them.