“These are the journeys of [massei] the people of Israel, when they went out of the land of Egypt by their companies under the leadership of Moses and Aaron.”  (Numbers 33:1)

Last week in Parasha Matot, the Lord gave instructions regarding the making of vows.  God expects us to be people of our word.  Indeed, the words that we speak reveal who we are and what we believe, but making a vow or a promise that we do not keep is akin to deception. 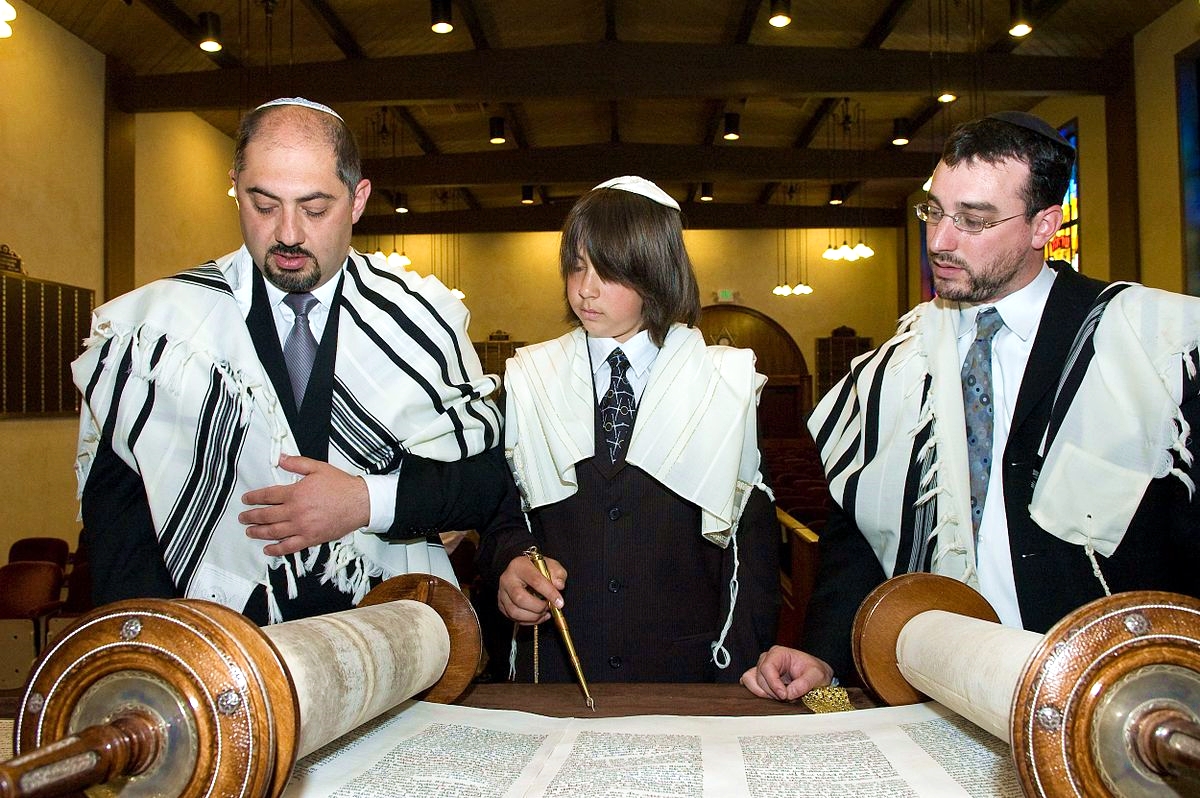 A 13-year-old boy reads publicly from the Torah scroll for the first time.

This week’s Scripture portion, which is often combined with Matot in the Torah reading cycle, describes the entire travelogue of the children of Israel.  Moses chronicled all of their stops and starts along the way since Israel’s exit from Egypt.

“Moses wrote down their starting places, stage by stage, by command of the LORD”  (Numbers 33:2)

What was the purpose for Moses chronicling in such a precise fashion, the entire Israelite desert itinerary of 42 journeys?  It may even seem dull, monotonous and repetitive, since each destination is mentioned twice:

On and on continues the list of places, with a length of stay from less than 24 hours to days, months, and even years. 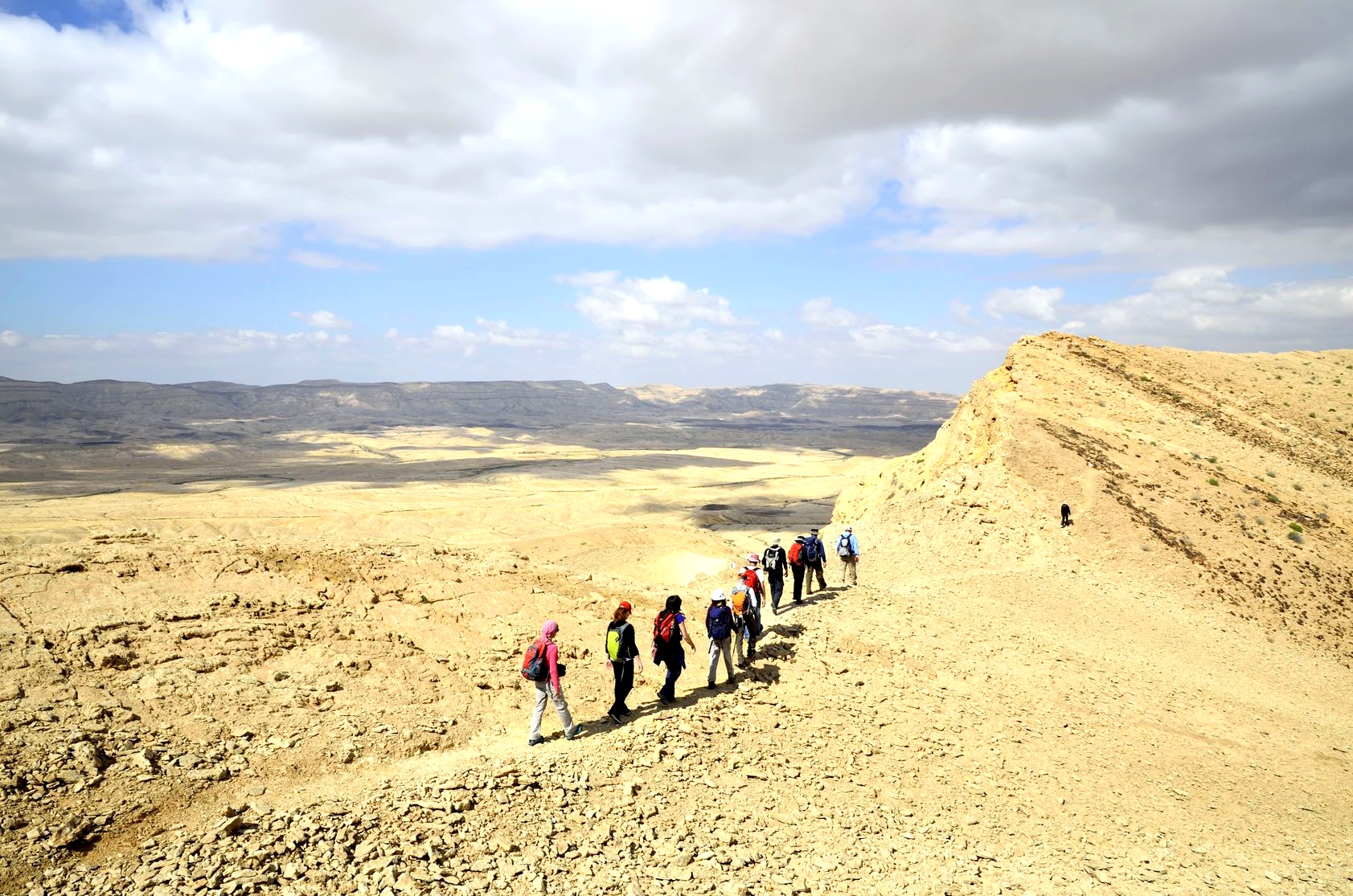 Hikers enjoy the beauty of the Negev Desert as they trek along the Israel National Trail on the edge of Big Crater.

In this Parasha, Moses is showing us that life is not simply a final destination, but a succession of destinations—each bringing us toward a progressive fulfillment of our destiny.  In other words, life is not only about the end goal; rather, it is more about the journey that takes place along the way.

Jewish history has always been one of movement, as we travel our long and winding road back to redemption.

That is why, perhaps, the Jewish People have been called the “Wandering Jews,” since we have been exiled into the nations for two millennia, marked by persecutions that led to more forced wanderings.

However, in this generation, the Jewish People are coming back to the Land, permanently:

“I will plant Israel in their own land, never again to be uprooted from the land I have given them,” says the LORD your God.”  (Amos 9:15) 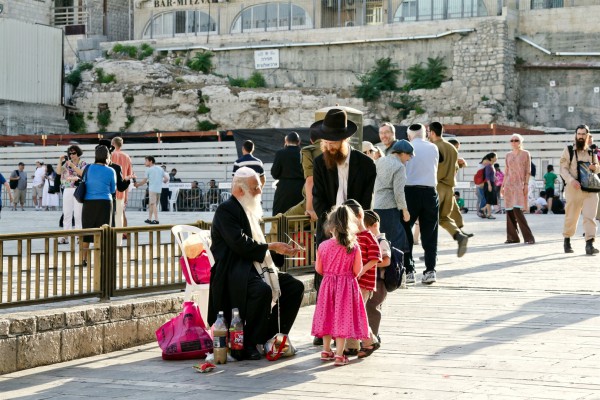 In life, we also are on a journey.

The question we may ask ourselves about our own personal journey is whether or not we are moving like a Jonah, trying to escape from God’s plan for our lives—or are we following the leading and guidance of the Holy Spirit (Ruach HaKodesh)?

Since each of us is on a spiritual journey in our walk with Adonai, it is helpful to recount the path we’ve taken, with all its twists and turns, as Moses did with the children of Israel.

Why is this important?  It is because too often memory fades and we forget what we were certain we would always remember.  We need to remember our journeys and transitions so that we see a broader view of God’s plan and interventions in our lives.

Through reflecting on our life experiences, we can grow in faith as we see how God intervened.  We can also grow in wisdom as we understand how we stumbled and got lost.

Also, if we don’t chronicle our journey, then future generations will not have the chance to gain wisdom from and build on our journeys.  Instead, they will likely repeat our same wanderings.

For these very reasons, every year the Jewish People recount the Exodus journey during the Passover Seder meal.

It is also why a great many people, especially in their latter years, choose to create personal memoirs, either written or in video format. 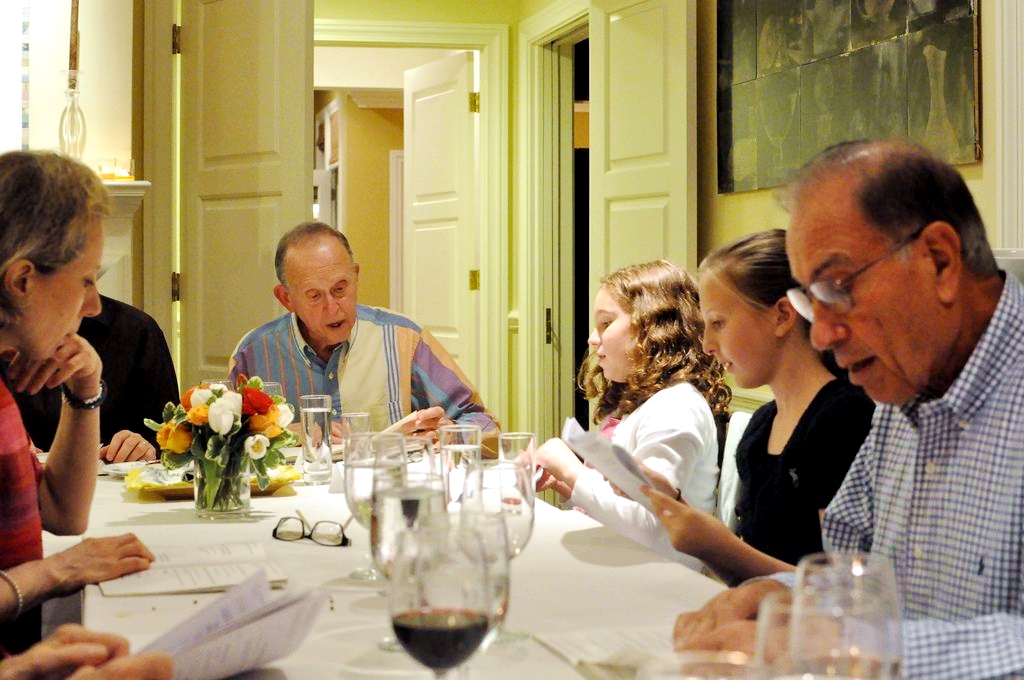 A Jewish family celebrates Passover together, recounting the Exodus using a Haggadah, the Jewish text that sets forth the order of the Passover Seder.

This week’s Haftarah reading is one of the few prophetic portions that correspond to the Biblical calendar, instead of the Torah portion itself.  It is also one of three portions read before the 9th of the Jewish month of Av (Tisha B’av)—August 5 of this year.

Three special Shabbats fall between Shiba Asar B’Tamuz (Seventeenth of Tammuz), a fast day that recalls when the walls of Jerusalem were breached, and Tisha B’Av, which remembers the destruction of the Temple.

The Haftarot for these three weeks are called Telata D’puranuta—The Three of Affliction.

This week’s prophetic reading falls in the middle of the three.  In it, the prophet Jeremiah rebukes the people, warning them that as a consequence for their sins, Jerusalem would be destroyed and the people sent into Babylonian exile. 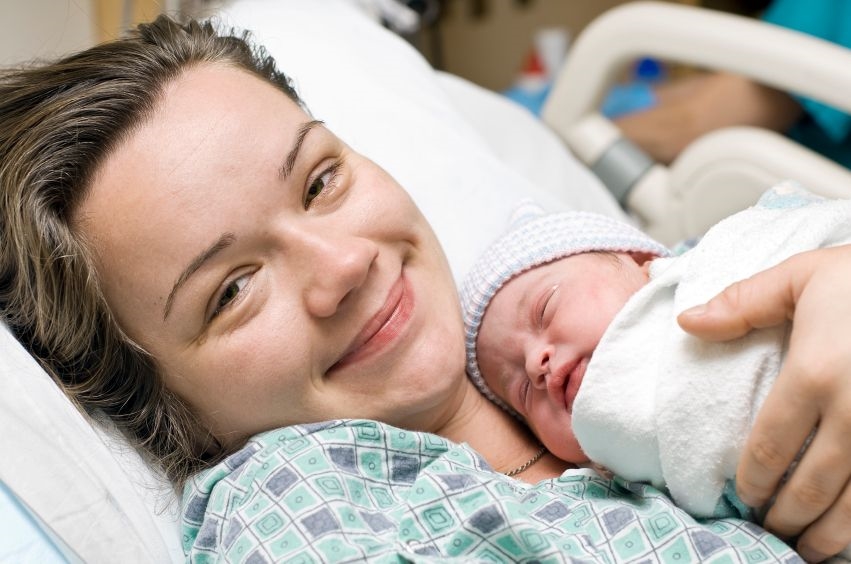 “He lifted the needy out of their affliction and increased their families like flocks.”  (Psalm 107:41)

This three-week period of affliction is also called Bein HaMitzarim, which literally means between the straits.

This term is also a reference to labor and childbirth.  When a woman is in full, active labor she is said to be “bein hamitzarim.”

This is a critical time, also called a transition, when the labor is hopefully going to proceed to the delivery of a healthy baby.  If things go badly, however, it can lead to dire consequences and even death for either the mother, the child, or both.

This Haftarah describes the transition point, bein hamitzarim, when Israel had the opportunity to repent from turning away from God and seeking after idols.

Israel’s denial and forsaking of God led to her destruction on the 9th of Av (Tisha B’av).  But it didn’t only happen once on this day.  It happened twice.

On this day, because of sin, both the First and the Second Temples were destroyed and the people were sent into captivity.

However, our own transitions in life don’t have to lead to death and destruction; they can lead to the birth of a new life through the Source of Life. 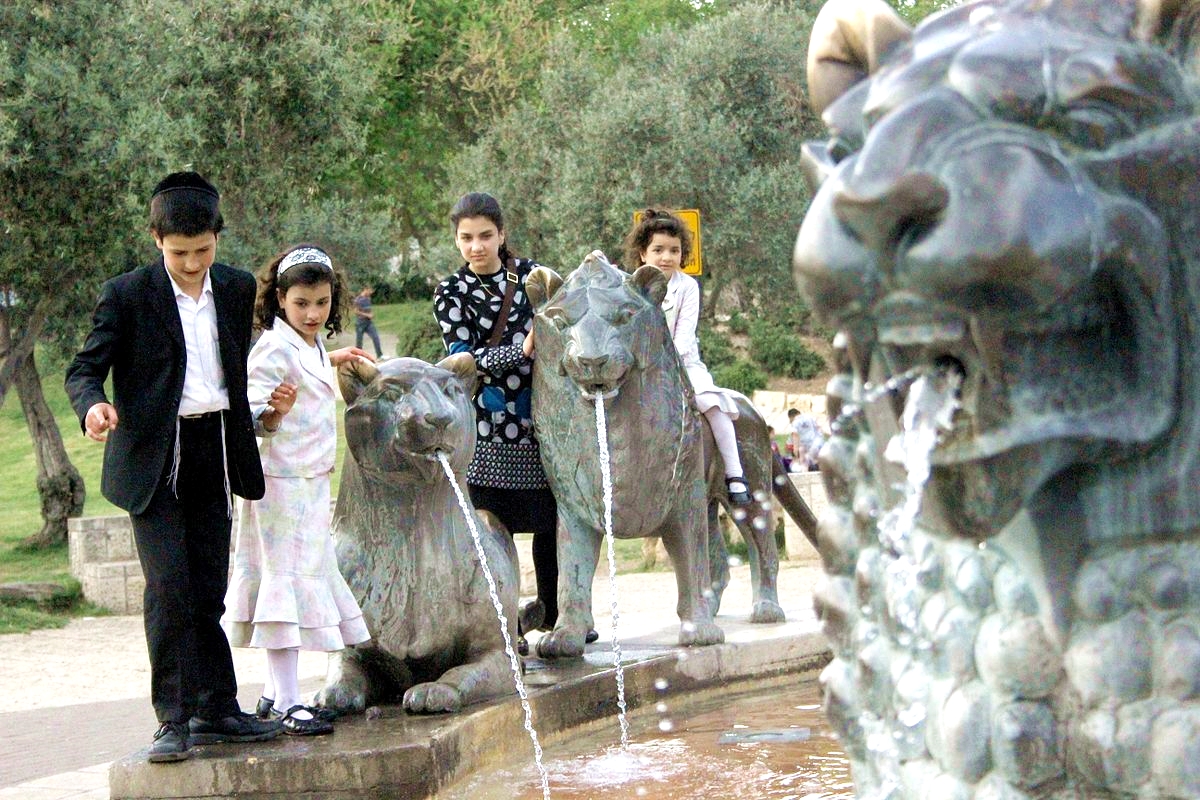 A name for God in this Haftarah is The Fountain of Living Water (Makor Mayim Chayim).  Through the prophet Jeremiah, God calls His people to recall how they walked away from their Source of Life.

“My people have committed two sins:  They have forsaken Me, the Spring of Living Water [Makor Mayim Chayim], and have dug their own cisterns, broken cisterns that cannot hold water.”  (Jeremiah 2:13)

In fact, on the last day of the Feast of Sukkot (Tabernacles), Yeshua stood up and boldly proclaimed Himself to be the Source of Living Water:

“If anyone thirsts, let him come to Me and drink.  He who believes in Me, as the Scriptures have said, out of his heart shall flow rivers of living water.  But this He spoke of the Spirit, whom those who believed in Him were to receive…”  (John 7:37–39)

When we thirst for more of God, He gives us His Ruach HaKodesh, which is the only kind of water that sustains eternal life.

When we drink of His Fountain of Living Waters, not only are we refreshed, but His living water flows out of us to refresh the lives of others. 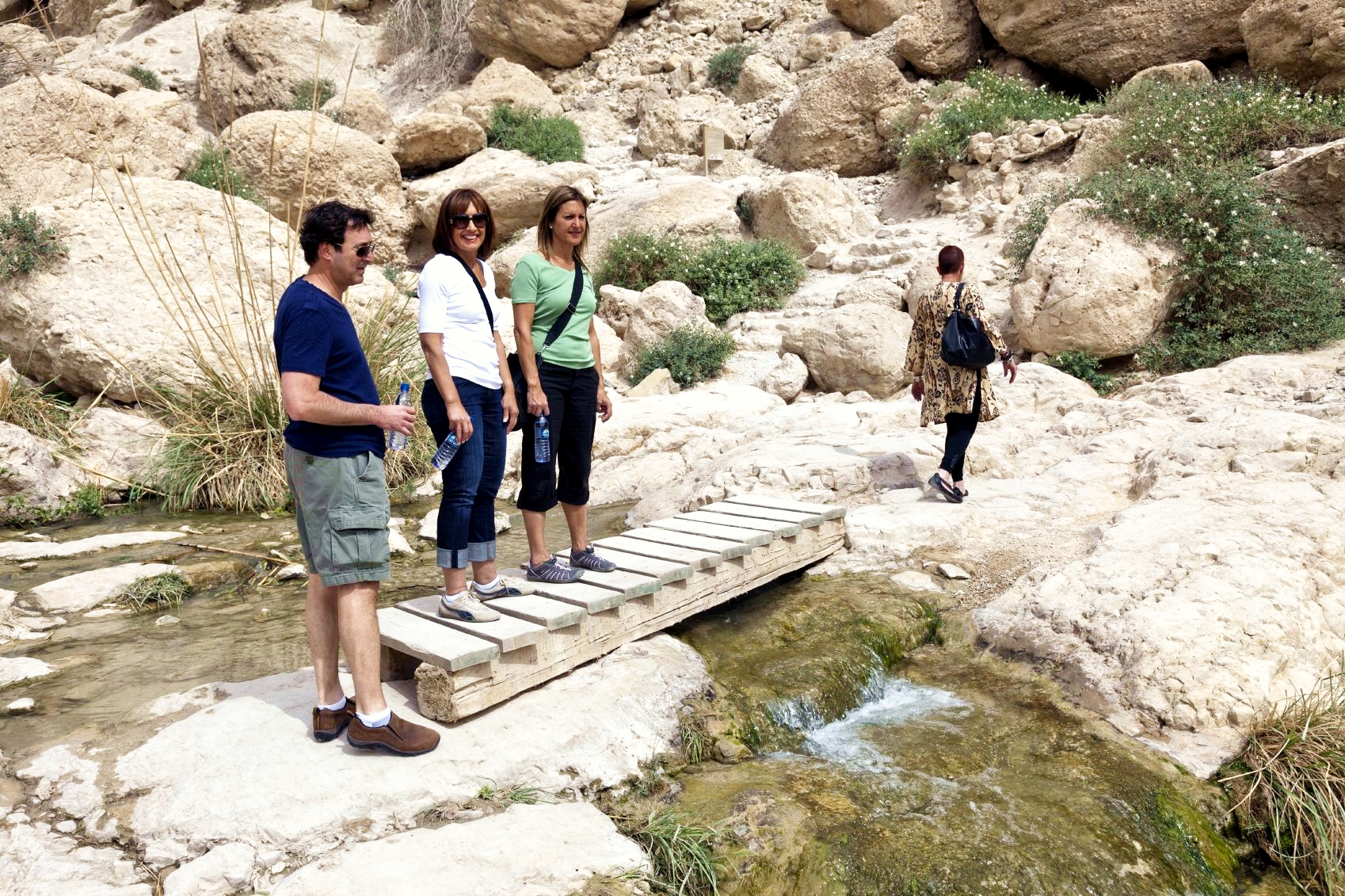 Visitors marvel over the water found at the desert paradise of Ein Gedi (spring of the goat), an oasis with waterfalls, pools of water and two large streams near the Dead Sea.

Turning Points on the Journey

In our journey through life, we may come to many turning points or transitions—times when we are truly bein hamitzarim (between the straits).  As with labor and childbirth, the pain can feel excruciating, but these times do not necessarily have to end in death.

Yeshua, the Fountain of Living Waters, has promised that when we are between the straits, we can come to Him for relief:  “Come to Me, all you who are weary and heavy burdened and I will give you rest.”  (Matthew 11:28)

If we will turn to the Fountain of Living Waters (Makor Mayim Chayim) during our turbulent times, like the Israelites did during their 40 years of wandering, we too can receive a whole new life with an eternal inheritance and responsibilities in the Kingdom of God:

“Forget the former things; do not dwell on the past.  See, I am doing a new thing!  Now it springs up; do you not perceive it?  I am making a way in the wilderness and streams in the wasteland. … to give drink to My people, My chosen, the people I formed for myself that they may proclaim my praise.”  (Isaiah 43:18–21)