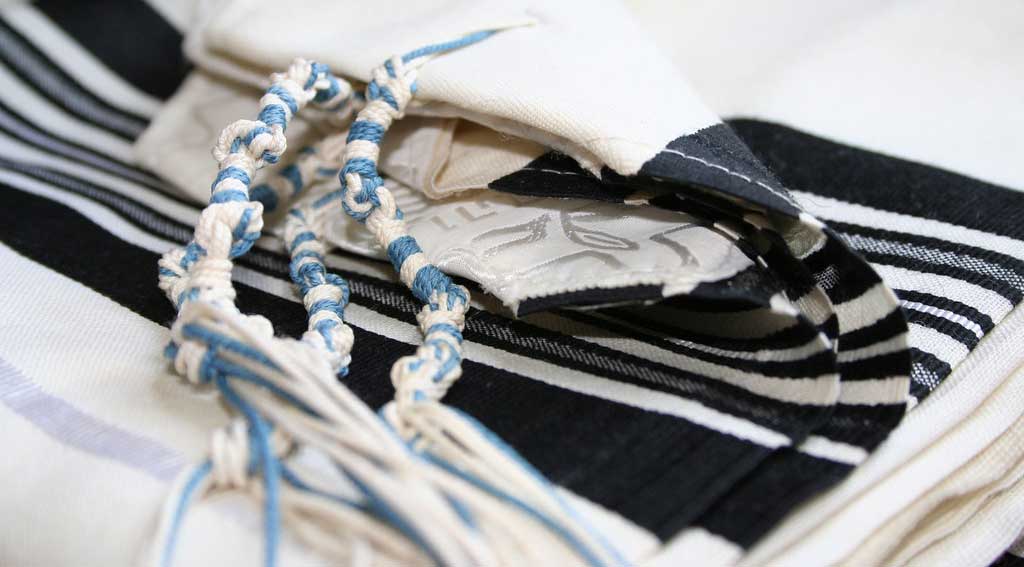 “Make tassels on the four corners of the cloak you wear.”  (Deuteronomy 22:12)

For thousands of years since the days of Abraham, the ancient Israelites were surrounded by pagan nations that worshipped false gods.

The one true God of Israel warned His Chosen People not to worship or live like these pagan idolaters. 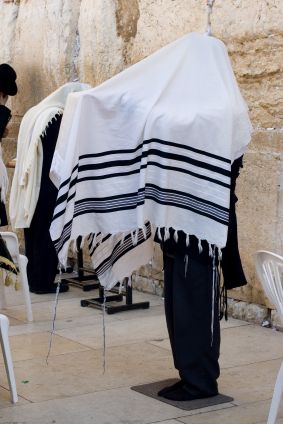 Some prayer shawls (tallits) are large enough to be draped over the head while praying.  In the photo above, tzitzit (tassels) hang from the four corners of the garment.

To help them in this regard, He gave them many commandments (mitzvot) that would show the world they were a people with a God-ordained calling.

Wearing tassels — in Hebrew, tzitzit – צִיצִ֥ת — is one of these commands.

It would become a continual sign to the world and to themselves that God has set them apart for devotion to Him alone.

Wearing Tzitzit Is a Reminder of God’s Laws

God gave the Israelites His instruction for wearing tzitzit when He told Moses:

“Speak to the Israelites and say to them:  ‘Throughout the generations to come you are to make fringes [tzitzit] on the corners of your garments, with a blue cord on each fringe [tzitzit].

“You will have these fringes [tzitzit] to look at so you will remember all the commands of the Lord, that you may obey them …  I am the Lord your God.”  (Numbers 15:38–41)

Orthodox Jews obey this command by wearing fringes on their prayer shawls (tallits) while they pray (as shown in the picture above).

They also wear a “tallit katan” which is an undershirt with tzitzit (as shown below right). 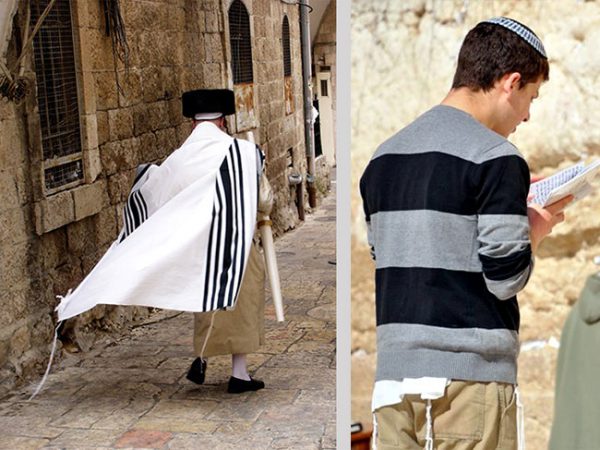 Even Yeshua (Jesus) wore tzitzit on His garments.

We know this because of a woman who suffered from “a hemorrhage for twelve years.”  No doctor could cure her, but with sincere faith “she said to herself,  “If I only touch His garment, I will get well.” 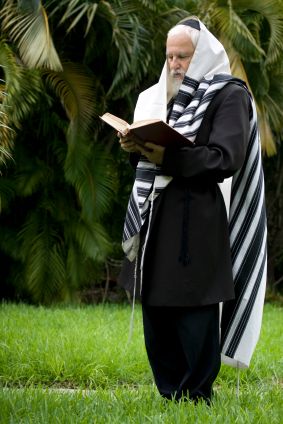 This Hasidic rabbi is wearing the traditional prayer shawl with fringes as he prays.

With dedicated perseverance, she pushed through a crowd of people, “came up behind Him and touched the fringe [kraspedon] of His cloak.”

The Greek word for fringe in this Scripture is kraspedon.  It is also translated as hem, edge, border, corner and tassel.

We understand, however, that this woman who reached out in faith touched the tzitzit of Yeshua’s garment, as it is the same word Yeshua uses when He refers to the tzitzit of the Pharisees, as we’ll see next.

As with most religious observances, obedience to practicing the commandment of wearing tzitzit can come from impure motives — such as wanting to show off one’s spiritual or social status.

Yeshua exposed this kind of pride within the ranks of the Pharisees (Jewish leaders), who because they loved to be seen by others, lengthened their tzitzit.

“Everything they do is done for people to see:  they make their phylacteries wide and the tassels [kraspedon] on their garments long,” said Yeshua.  (Matthew 23:5) 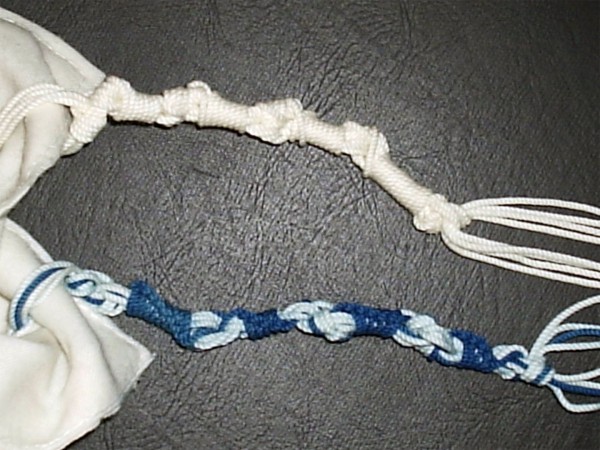 The tzitzit pictured above are tied in two different styles.  The all white one is tied in the traditional Ashkenazi style, while the one with the thread of blue (techelet) is woven in the Sephardic style.  Notice that each tassel has eight strands with five knots, totaling 13.

The Jewish People have found several ways to exalt God alone as they practice the Biblical custom of wearing tzitzit.

The way tzitzit are tied reminds the Jewish person wearing it of God’s commands — all 613 of them in the Torah (The Five Books of Moses).

Eight strands in each tzitzit are tied in a series of five double knots to symbolize the number 13 (see image above).

According to Jewish tradition, adding 13 to the numerical value of the Hebrew word “tzitzit,” which is 600, gives the grand total of 613.

Using a special color in the threads is another way to exalt God.

The long thread of a special shade of blue that God commands in each tzitzit is called techelet in Hebrew. 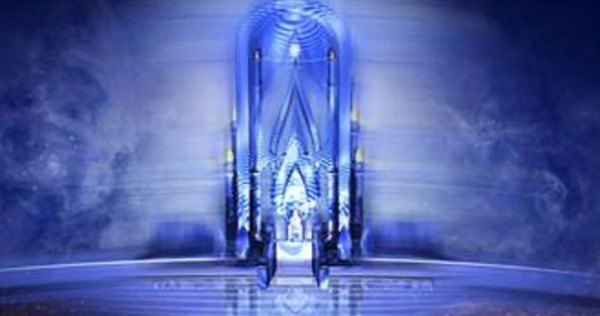 The Prophet Ezekiel saw a heavenly throne of sapphire or perhaps lapis lazuli (Ezekiel 1:26 and 10:1).

Jewish tradition holds that the blue dye must come from a sea creature called the chilazon (Tosefta Menachot 9:6).

However, it is not recorded exactly what this “chilazon” is.

Some believe that Rabbi Herzog’s dye is the Biblical blue commanded by God, and so they use it for their own techelet.  However, many observant Jews today use only white fringes to avoid wearing a shade of blue that God did not intend. 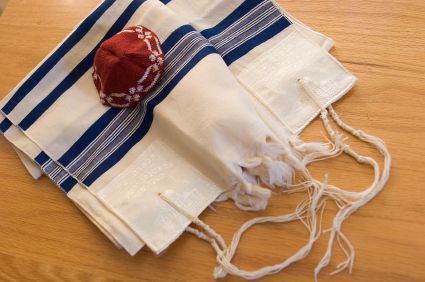 In accordance with tradition, each tzitzit has 39 windings, which corresponds to the numerical value of the Hebrew phrase, “Adonai Echad” (The Lord is One). This is a powerful reminder to walk the narrow path leading to the one true God.

Tzitzit Is a Symbol of Death and Life

When a Jewish man dies, a fringe is cut off his tallit (prayer shawl), which symbolizes the end of his obligation to follow the commandments.
When we understand Jewish customs such as these, we gain deeper insight and uncover much richness in the Tanakh (Old Testament).

For instance, when King Saul and his men were pursuing David to kill him, David crept up behind Saul in a cave and could have easily killed his king.

Instead, David mercifully symbolized Saul’s death by cutting off the corner of his robe.

David said to Saul, “I cut off the corner of your robe, but did not kill you.  Now understand and recognize that I am not guilty of wrongdoing or rebellion.  I have not wronged you, but you are hunting me down to take my life.”  (1 Samuel 24:8–11)

Using symbols to make a point as David did with Saul can be a powerful and effective way to reach others.  We see this in how Saul responded to David’s mercy: 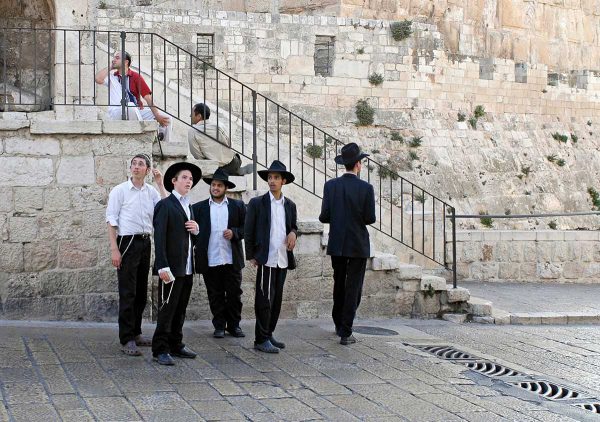 Can Women and Gentiles Wear Tzitzit?

In some Messianic Jewish congregations, a number of Gentile Believers choose to wear tzitzit because they want to follow the commandments given to the Jewish people as well as to identify with the Jewish people and as an expression of their faith in the God of Israel.

According to Jewish tradition, women are exempt from the requirement of wearing fringes on their garments.

In Orthodox Judaism, a woman wearing tzitzit is likened to a woman dressing in men’s apparel, which is forbidden in the Torah.

We see this rule in full force at the Western Wall, which is under the authority of ultra-Orthodox rabbis.  There, women are supposed to pray in complete silence, with no tallit or Torah scrolls.

In Reform Judaism, however, women are allowed to wear the tallit and to participate more fully in synagogue services, such as publicly reading from the Torah.

Some Reform activists, such as the “Women of the Wall” organization, have been fighting for women’s religious expression at the Western Wall, including wearing prayer shawls with tzitzit and reading from sacred Sefer Torah Scrolls. 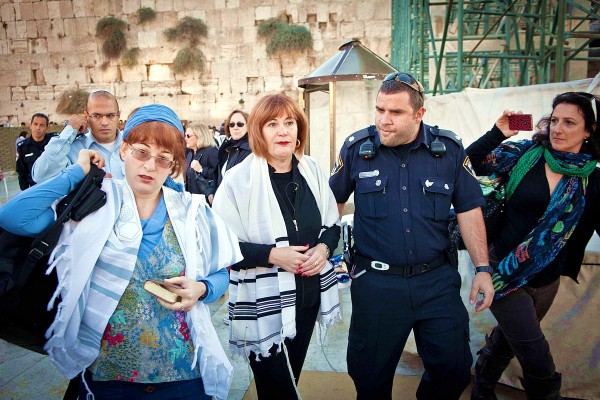 Women of the Wall wearing tallits with tzitzit in the women’s section at the Kotel
(Western Wall) in Jerusalem.

The Biblical custom of the tzitzit continues to be a rich reminder to all Believers, Jew or Gentile, men and women, to stay focused on God.

Even Yeshua HaMashiach (Jesus the Messiah) wore them in obedience to God’s commands.

And the two most important commandments that we all need to keep are what Yeshua told us in Mark 12:29–31:

Feature
The Prophetic Birth of the Light of the World

Feature
The Dead Sea Scrolls and the Aleppo Codex - Part 2