Extraordinary Miracles of the Messiah

“Remember the wonders he has done, his miracles, and the judgments he pronounced,”  (Psalm 105:5)

Throughout the Bible, we find miracles — an action by the divine will of God that is unexplainable in the “natural” as we know it today, and that is why we consider them to be “supernatural” experiences.

Sometimes God performs a miracle in answer to our prayers, sometimes in judgment, and sometimes He just does a miracle because He wants to. 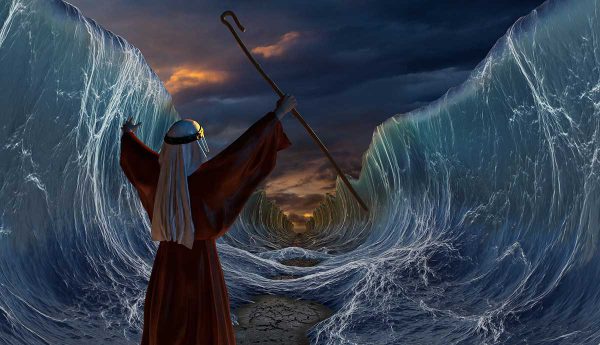 Parting of the Red Sea

What Is a Miracle?

In Hebrew, the word for miracle is mopheth — מוֹפֵת.  It is most often translated as sign or wonder.

God parting the Red Sea or manifesting His divine presence in a cloud are certainly wondrous events.  And they are signs that point to the One who set the laws of nature in motion.  He is the only one who has the authority to make new laws or alter laws.

We often define miracles today as breaking these “laws of nature,” but in ancient Israel, there was no Biblical word for “nature,” so they had no idea there were any laws for it.

As our understanding of the workings of God’s creation evolved, so did the Hebrew language.

The modern Hebrew word tevah means both a person’s nature and the creation of God around us.  It was first used in the 12th century and was created from the Biblical verb T-V-A or tavah, which means to sink down or make an imprint. 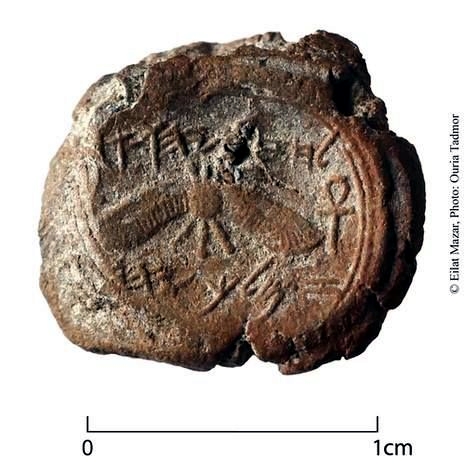 This ancient seal bears the Hebrew inscription “Belonging to Hezekiah, (son of) Ahaz, king of Judah.”  The seal or bulla was discovered next to a 10th-century B.C. royal building in the Ophel area of Jerusalem.   It was used to make imprints of King Hezekiah’s authority onto documents.

The noun tevah in the Bible is a signet ring, which bears a seal like the one above.  Kings used their rings to make an imprint on a decree to indicate his signature, his authority as in Esther 8:8.

Of course, nature is God’s imprint, bearing His name all around us.  The oceans, the mountains, the birds, and every living thing bears witness to His sovereign authority.  It is His revelation to us, if only we would stop to see, hear, smell, and feel it.

Yet, for much of our lives, we don’t see God in nature, it’s just there — until a miracle happens.

In modern Hebrew, a miracle is the opposite of tevah.  It is nes (נס)—to rise up or elevate.

A flagpole in modern Hebrew is also nes.  It stands high above the natural world for all to see.  God’s supernatural interventions are like this.  They become noticeable to most everyone.

On the other hand, the Jewish view of miracles tends to downplay these extraordinary manifestations of God’s work, and up-play the “hidden” miracles all around us. 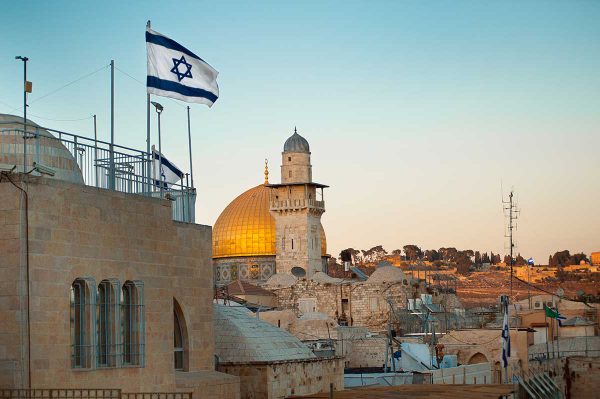 A flagpole (nes) flying an Israeli flag over the Old City of Jerusalem.

The Jewish View of Miracles

The sages of Judaism tend to agree that when it comes to miracles, it is more likely that  “the one to whom the miracle is happening, does not recognize the miracle,”  such as in the process of childbirth (Nidah 31a).

We often don’t realize how miraculous it is to hear a heartbeat or see a tiny acorn grow into a mighty oak tree.

As the Hasidic Rabbi Brownstein explains, a baby born during the 40 years of Israel’s wilderness wanderings would think that manna raining down from heaven every day was normal, until it stopped.

For this reason, part of the morning prayers of an observant Jew is giving “thanks for Your miracles that are daily before us.”

This is one way modern Judaism distinguishes itself from Christianity, which tends to place great significance on the supernatural intervention of God—especially on the miracles performed by Yeshua.

But, in fact, Yeshua’s miracles are very Jewish. 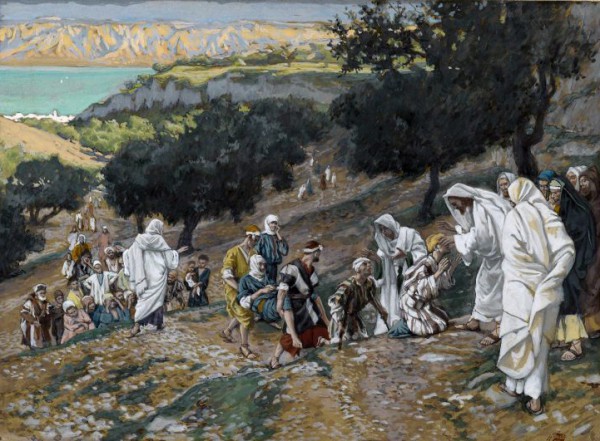 Salvation (which in Hebrew is Yeshua) has always been the goal of God our Saviour.

And miracles would offer significant signs for the Jewish People that Yeshua haMashiach, Jesus the Messiah, the Anointed One, had arrived.

The prophet Isaiah wrote about what miracles would happen at the time of God’s judgment and salvation of the world:

“The eyes of the blind [will] be opened and the ears of the deaf unstopped.  Then will the lame leap like a deer, and the mute tongue shout for joy.”  (Isaiah 35:5–6) 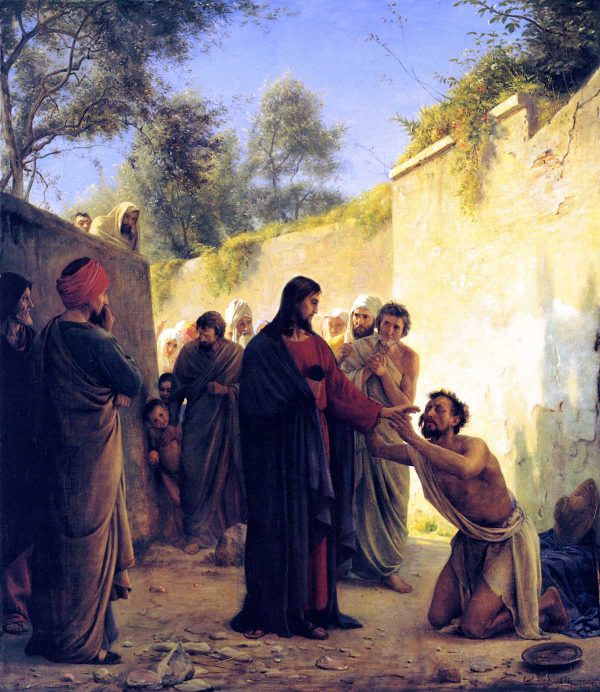 1. Heal someone who was born blind from birth.  From Scriptures such as Exodus 4:11 and 34:7, sometimes God alone is responsible for birth defects and, therefore, God alone (or His Messiah) would be the only one that could reverse such a defect.

This is why Yeshua told the Pharisees after healing a man born blind that  “Neither this man nor his parents sinned, but this happened so that the works of God might be displayed in him”  (John 9:3).

Yeshua personally cleansed a leper when he laid his hands on him, which was recorded in Mark 1:40–44 and elsewhere. It sparked an investigation by the Sanhedrin (High Jewish Court), who began to observe Yeshua to determine if He could actually be the Messiah. 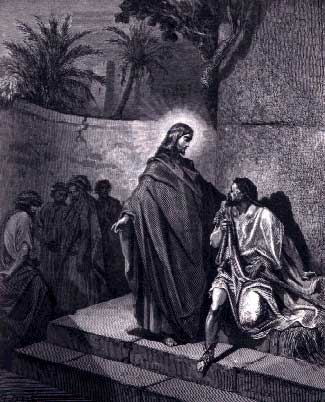 3. Yeshua raised Lazarus from the dead after three days.

According to Jewish tradition, the spirit remains with the deceased body for three days.  During this time, the body could theoretically be resurrected according to tradition.  After three days, the spirit leaves and resurrection is not possible, except through a work of God, or His Messiah.

Yeshua raised His friend Lazarus on the fourth day!  And again, He said,  “It is for God’s glory so that God’s Son may be glorified through it”  (John 11:4).

Even more significantly, Messiah Himself, divinity in flesh, resurrected after three days in a tomb.

This was not all He did.

“Yeshua did many other things as well.  If every one of them were written down, I suppose that even the whole world would not have room for the books that would be written.”  (John 21:25)

The miracles of Yeshua are not disputed.  Even Rabbinic literature acknowledges them.  However, it is unfortunate that they attribute Yeshua’s (Jesus’) miracles to magic or sorcery. 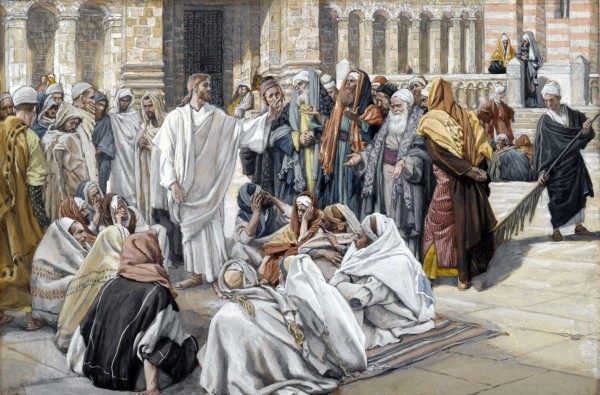 The Pharisees were continuously observing and questioning Yeshua about His miracles and where He got His authority. (Illustration by James Tissot: The Pharisees Question Yeshua).

Although the religious leaders accused Yeshua of casting out evil spirits by the power of Beelzebub (Satan), Yeshua always said He did it in the name and authority of our Father in heaven (YHVH), and no one else, which is the sign of a true miracle of God:

“If a prophet or a dreamer of dreams arises among you and gives you a sign or a wonder, and the sign or the wonder comes true, concerning which he spoke to you, saying, ‘Let us go after other gods (whom you have not known) and let us serve them,’ you shall not listen to the words of that prophet or that dreamer of dreams; for the LORD your God is testing you to find out if you love the LORD your God with all your heart and with all your soul.  “You shall follow the LORD your God and fear Him; and you shall keep His commandments, listen to His voice, serve Him, and cling to Him.”  (Deuteronomy 13:1-4)