God’s Glory (Kavod) Is in Your Reach 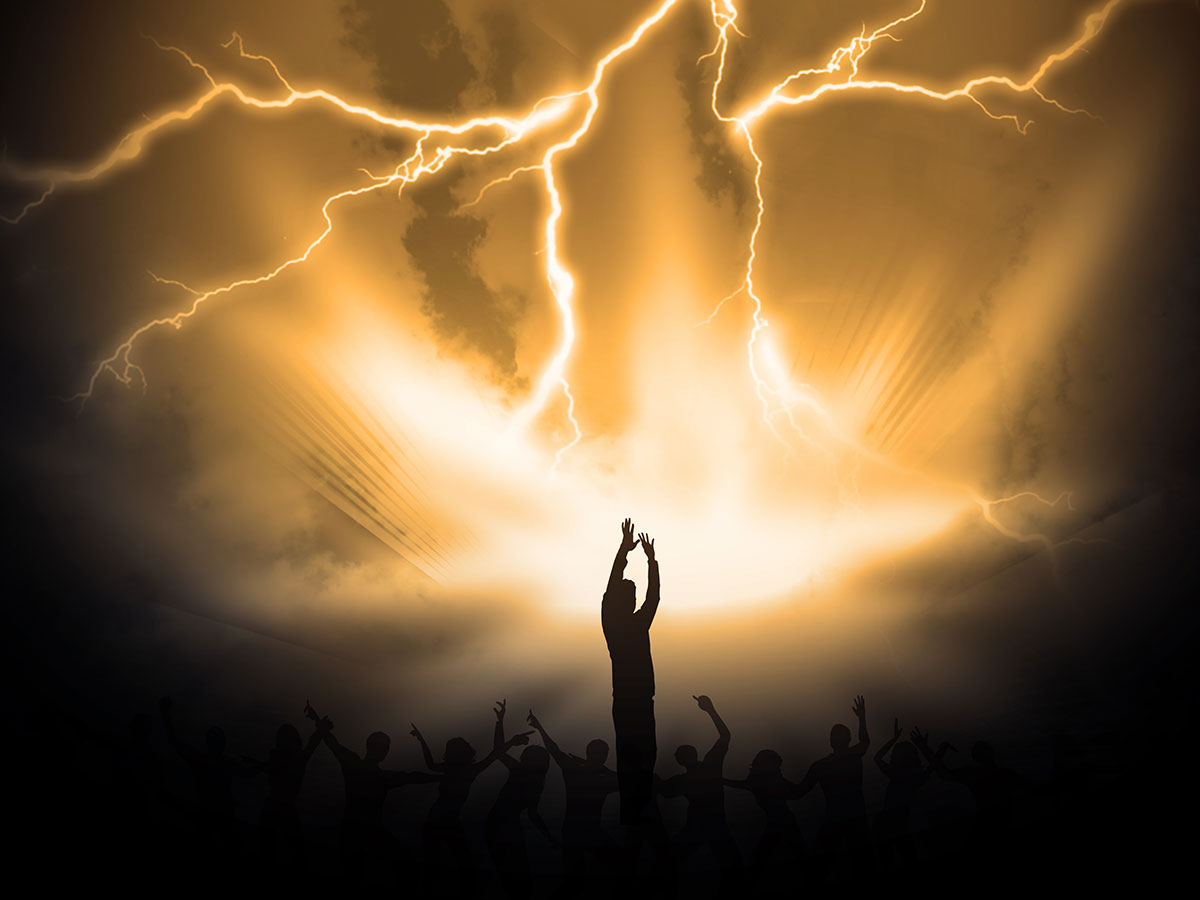 Some ancient Hebrew words in the Bible that describe God’s magnificent nature are used a lot in Israeli culture today.

However, in the modern Hebrew language they are rarely ever used in their original sense.  Such is the case with the word kavod, which is the glory of God.

If you visit Israel, you might hear someone say, Kol hakavod!  which means, Well done!  or Good job!

But the literal Biblical meaning is All the glory or All the honor!

Kavod is also used as a title to address judges, the president, or the prime minister of Israel.  It is a title meaning, Your Honour or Your Excellency. 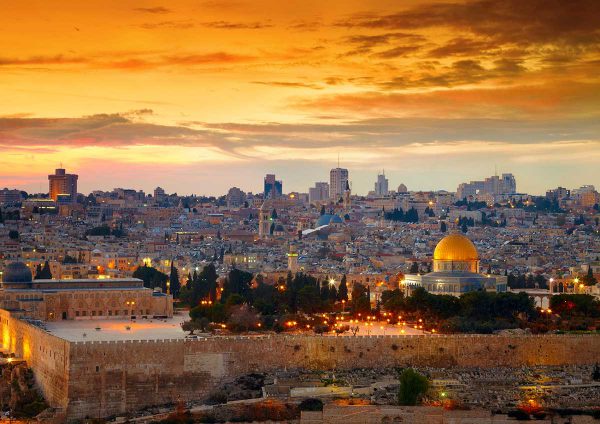 Certainly, God deserves such an admirable description.  That is why we see the word kavod in the Bible when it refers to the heavy, weighty, incredible, awesome, tangible Divine Presence of God.

Kavod points to His worth, reputation, honor, and authority as the Supreme God of Israel and the Universe.

While there are other meanings of kavod in the Tanakh (Old Testament), it typically describes God’s beautiful and brilliant creation as well as His own appearances on earth, which we know as theophanies.

We can get a sense of God’s authority over all the universe by simply looking all around us. 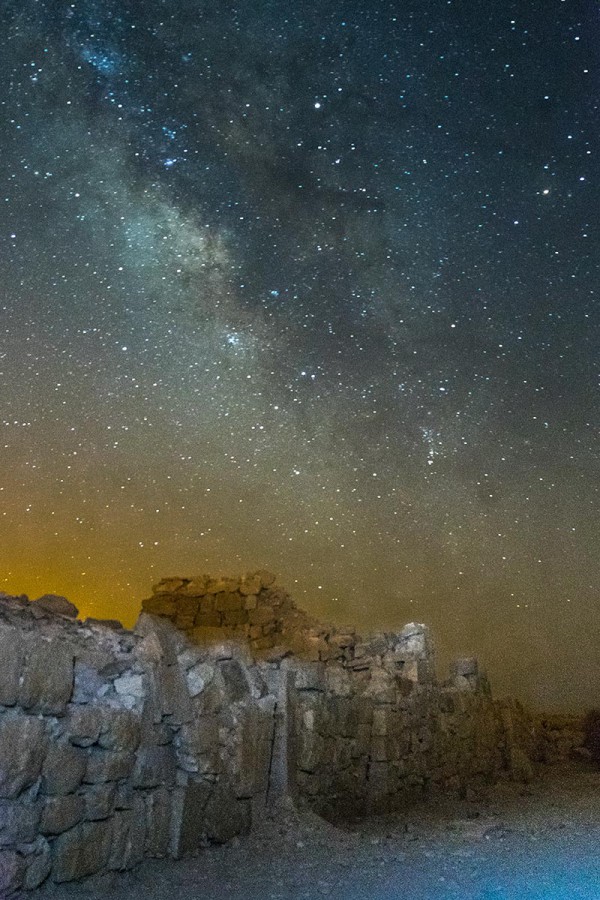 The Heavens Declare the Kavod of God

As we consider the vastness of the heavens, we are left feeling like a spec on this planet.  The psalmists often speak of this breath-taking kavod and ask us not to be silent about it:

“Declare His glory among the nations, His marvelous deeds among all peoples.”  (Psalm 96:3)

While traveling in Greece, the Apostle Paul gently confronted the pagan worshipers who were giving glory to lifeless idols of stone in the city of Athens.

He asked them to, instead, consider the glory that is seen in all of God’s magnificent creation:

“From one man He made every nation of men, to inhabit the whole earth;  and He determined their appointed times and the boundaries of their lands.”   (Acts 17:24–26)

Paul then gives the reason God has revealed His kavod to us in this way:

“God intended that they [mankind] would seek Him and perhaps reach out for Him and find Him, though He is not far from each one of us.”  (Acts 17:27)

God desires relationship with us so much that He made the entire universe for this purpose.

As we lift our eyes, His vastness is beyond our comprehension;  His glory and weightiness filling everything.  “He sustains all things by His powerful Word.”  (Hebrews 1:3) 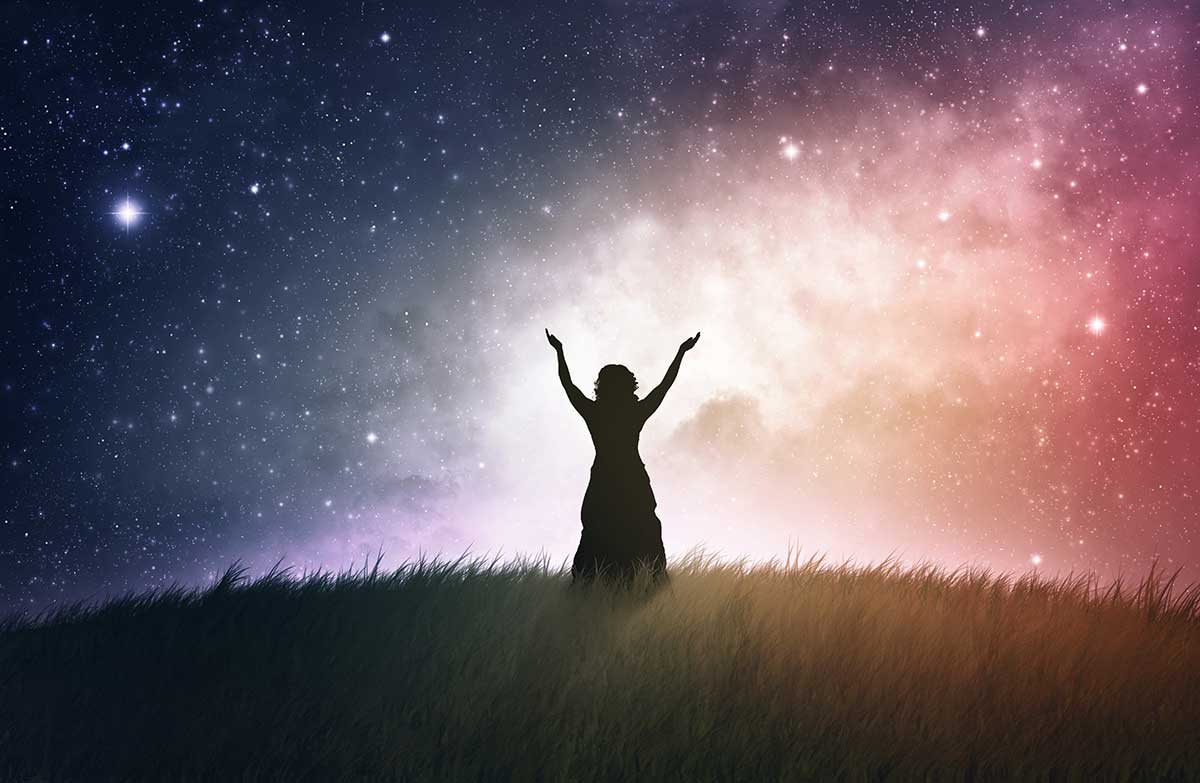 His Glory Is Within Our Reach

To prove that God is near His People, He revealed His glorious power in forms of thunder, lightning, and dark clouds to the extent that the people were afraid to go anywhere near the Mountain of God (Exodus 20:18–19).

But Moses wanted the People of Israel to do more than fear God;  he wanted them to honor and respect His authority.

He also wanted them to feel comforted and assured that God’s glory would comfort and guide them in their wilderness journey to the Promised Land.

So, God tells them:

“All the people among whom you live will see the LORD’s work, for it is an awesome thing that I am doing with you.”  (Exodus 34:10) 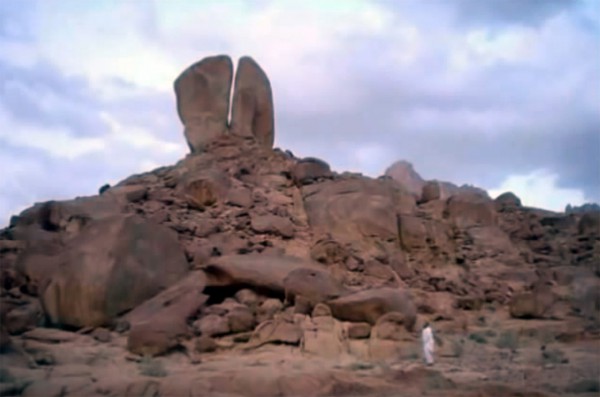 This split rock at Mount Horeb in Saudi Arabia is thought by some to be the rock from which God supernaturally made water gush forth for the Israelites in the wilderness as described in Exodus 17:1–7 and Numbers 20:1–14. (YouTube Capture: Fair Use)

God showed the Israelites His kavod (glory) in tangible ways by raining down bread from heaven called manna, pouring out water from a rock, and giving Israel numerous victories in battle.

We might see God’s kavod today when we mysteriously receive a check with just the amount of money we need, see a supernatural healing, or when someone walks into our life exactly when we need help or comfort. 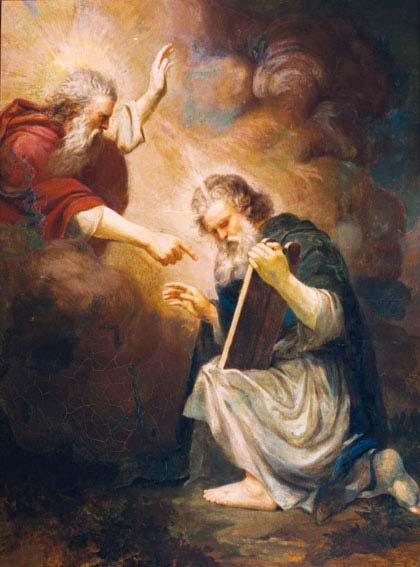 Moses receiving the tablets of the law (1868), by Joao Zeferino da Costa

Since Moses and God had such a close relationship, the prophet made a bold, personal request of the Lord:  “Please show me Your kavod”  (Exodus 33:18).

So, while passing by Moses at the top of the mountain, God gave him a little piece of His radiance;  perhaps so that the Israelites could be assured that Moses was, indeed, God’s anointed leader.

When Moses came down from the mountain, “Aaron and all the Israelites looked at Moses, and behold, his face was radiant.  They were afraid to approach him.”  (Exodus 34:30)

God’s Glory Is in Us

The Apostle Paul writes how Believers can be vessels of God’s glory:

“Now if the ministry that brought death, which was engraved in letters on stone [the 10 Commandments], came with glory (kavod) so that the Israelites could not look steadily at the face of Moses because of its glory, already fading away, will not the ministry of the Spirit be even more glorious?”  (2 Corinthians 3:7–8)

What is the ministry of the Spirit?

It is the very Presence of God in us who counsels us, guides us, and gives us supernatural gifts that empower us to serve Him on earth.

Israel’s prophets, kings, priests, and some craftsmen revealed God’s glory through the authority and gifts that God’s Spirit gave them. 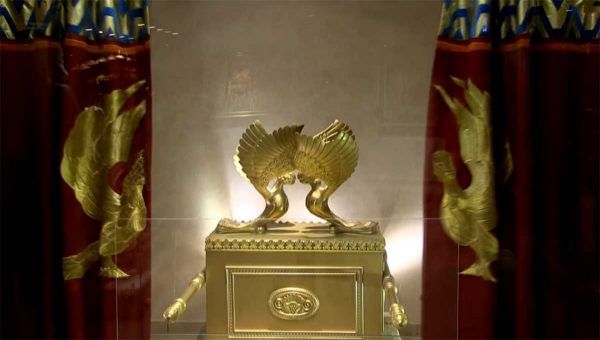 The craftsman Bezalel made the Ark of the Covenant and other furnishings and vessels for the wilderness Tabernacle. He did this after God “filled him with the Spirit of God, with wisdom, understanding, and ability in all kinds of craftsmanship, to design artistic works in gold, silver, and bronze, to cut gemstones for settings, and to carve wood, so that he may be a master of every craft.”  (Exodus 31:2–5) (Temple Institute YouTube capture)

We also display His glory when we, for example, show Divine love, wisdom, knowledge, and understanding as we teach, parent, or mentor others.

“But we have this treasure in jars of clay to show that this all-surpassing power is from God and not from us.”  (2 Corinthians 4:7)

With His Spirit, we are changed from one degree of kavod to the next as we grow closer to the Glorious One in obedience and love.  It is as though each time we look in a mirror, we see more of Him in us, and so do others.  (2 Corinthians 3:18)

And we can only do this with the power of His Spirit working through us. 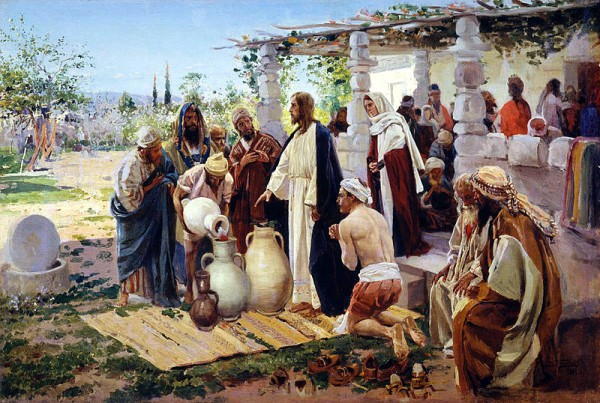 Miracle at Cana, by Vladimir Makovsky depicts Yeshua changing water into wine, “through which He revealed His glory.” (John 2:11)

Paul, in the Book of Hebrews, describes Yeshua (Jesus) as the “radiance of God’s Glory and the exact representation of His being.”  (Hebrews 1:3)

Elsewhere we read that “He is the image of the invisible God”  (Colossians 1:15).

The Apostle John couldn’t even stay standing when the Risen Messiah’s Glory was revealed (Revelation 1:17).

Sadly, religious art over the centuries has reduced this glory to a halo.  This is a far cry from the descriptions of those who personally saw Yeshua in all His glory.

On another high mountaintop (possibly Mount Hermon, which is Israel’s highest).  Three disciples saw the glory of God emanate out of Yeshua before their very eyes.  “His face shone like the sun”  (Matthew 17:2).

Amazingly, Moses was there, too, with Yeshua.  The same one who saw God’s kavod in his own lifetime, saw the same glory revealed in the Exact Replica! 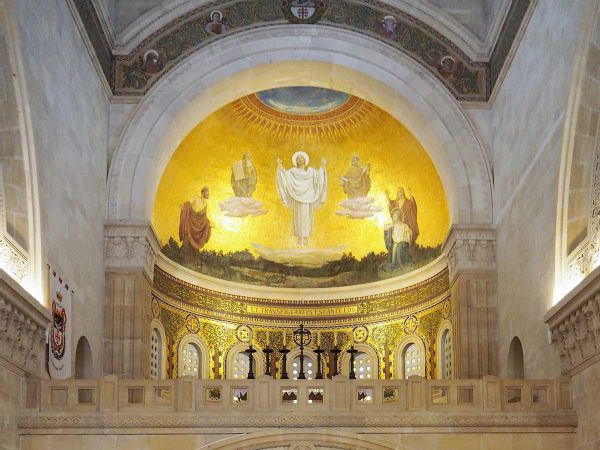 The Nicene Creed explains this miraculous encounter as “God from God, Light from Light, of One being with the Father.”

The Apostle John explains the glorious brilliance in Yeshua by writing that:

“The Word [Memra in Aramaic] became flesh and made His dwelling among us.  We have seen His glory, the glory of the one and only Son, who came from the Father, full of grace and truth.”  (John 1:14)

This would have reminded the Jewish People of their own sages who often called the glory of God that appeared on Mount Sinai, His Memra or Word.

John also agrees with His Jewish brethren when he says that “no one has ever seen God” — and goes on to say, except “the one and only Son, who is Himself God and is in closest relationship with the Father who has made Him known.”  (John 1:18)

So, the One nearest the Father is the one who could most fully reveal  Him — Yeshua.

This is why Yeshua could confidently say to Martha and Mary before raising Lazarus from the dead, “Did I not tell you that if you believe [in Me], you will see the glory of God?”  (John 11:40)

As you seek the Lord, may His glory (kavod) be manifested in your life. 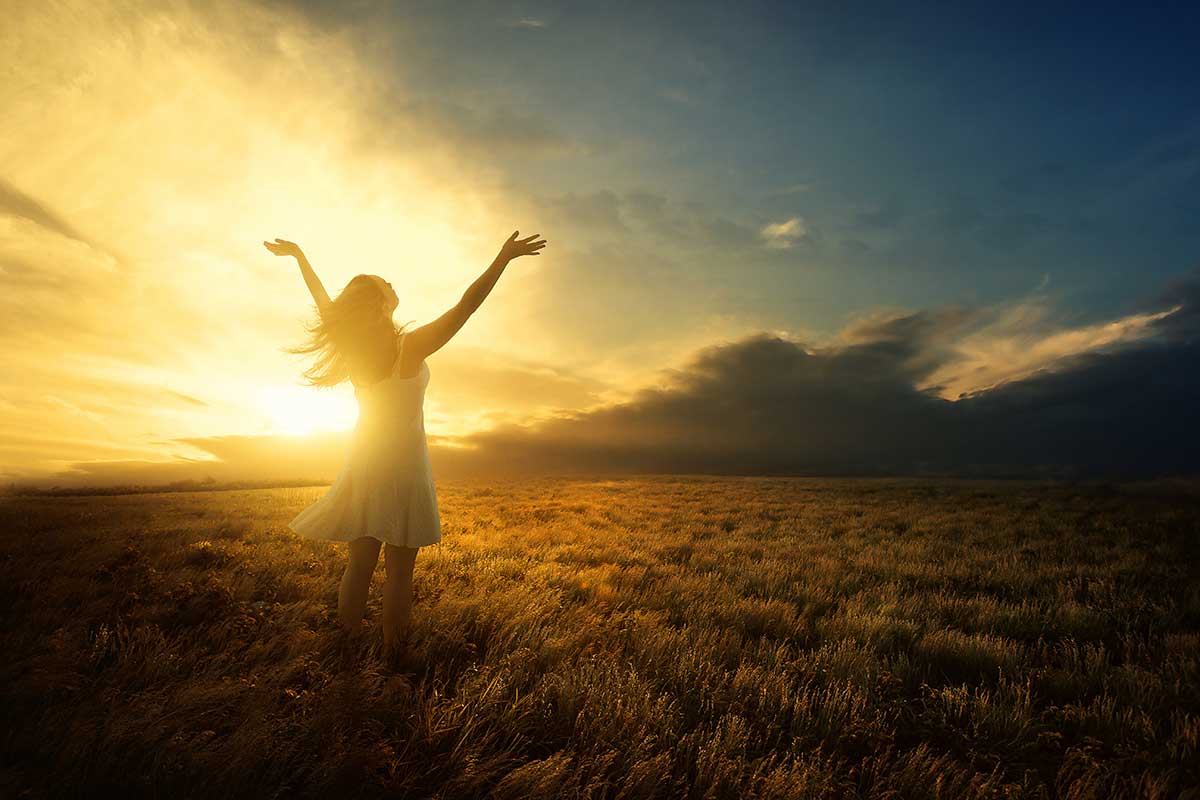