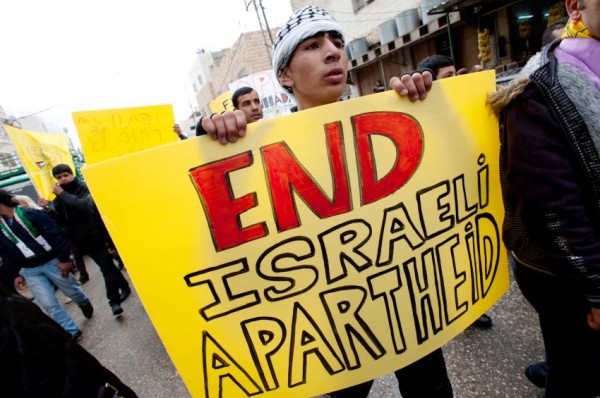 The aim of IAW is to manufacture an international perception of Israel as an “apartheid” state much as South Africa was prior to 1994.

This annual misinformation campaign, which promotes anti-Israel demonstrations around the world, begins in the United States and Canada today, and will reach Israel on March 8th and South Africa next week. 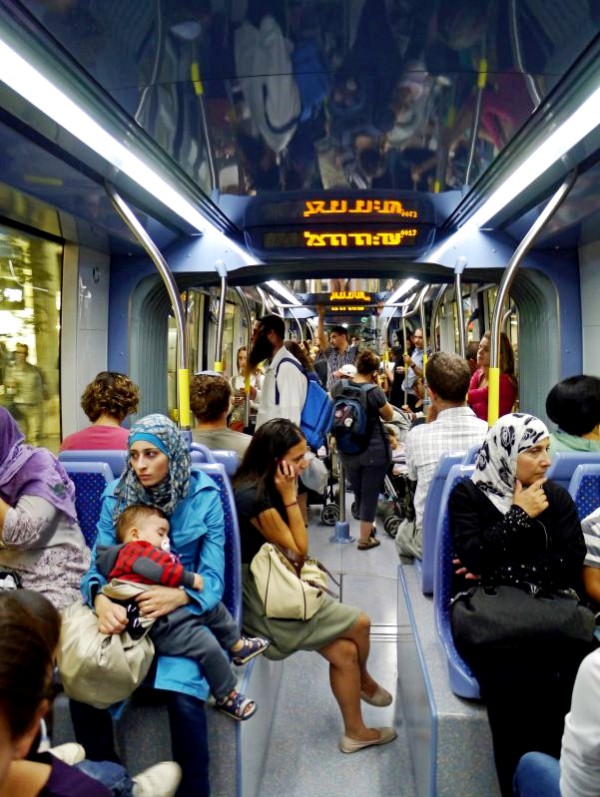 Around the globe, university lectures will present Israel as an occupying power, and street rallies involving Palestinians will protest Israel.

Other actions will include the promotion of the Boycott, Divest, and Sanctions movement (BDS) on campuses and in municipalities.

This unmerited, highly organized worldwide attack on Israel (and by association, the Jewish People) can only be a fulfillment of Bible prophecy as expressed by such prophets as Zechariah and Ezekiel, and by King David when he wrote:

While these events have been considered hugely successful—last year over 215 cities worldwide participated—not everyone is buying into the BDS movement’s propaganda.

Last week in the UK, the Oxford University Student’s Union rejected a motion calling for blanket sanctions against Israel by a vote of 69-10, with 15 abstentions.

“It’s encouraging to see that this vote reflects a student body who are willing to discuss the complexities that exist within Israel and do not see boycotting it as a viable option or avenue to discuss the conflict,” said Judith Flacks, the Union of Jewish Students’ campaign director.  (JTA) 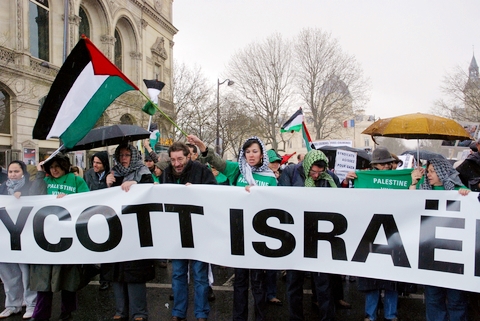 Author and lecturer Norman Finkelstein, one of Israel’s most devastating critics, has reviewed the BDS movement and exposed its underlying anti-Israel and even anti-Semitic true nature.

In an interview that can be viewed on YouTube, Professor Finkelstein said that the BDS leaders declare themselves “agnostic” when it comes to the existence of Israel.

But he said this is a lie and that the ultimate goal of the BDS is “to eliminate Israel.”  (YouTube: Norman Finkelstein on BDS)

“I support the BDS,” he said, “but it will never reach a broad public until and unless they’re explicit in their goal.  And their goal has to include recognition of Israel, or it’s a nonstarter; it won’t reach the public.”

Finkelstein then admitted that BDS is really “just a cult.” 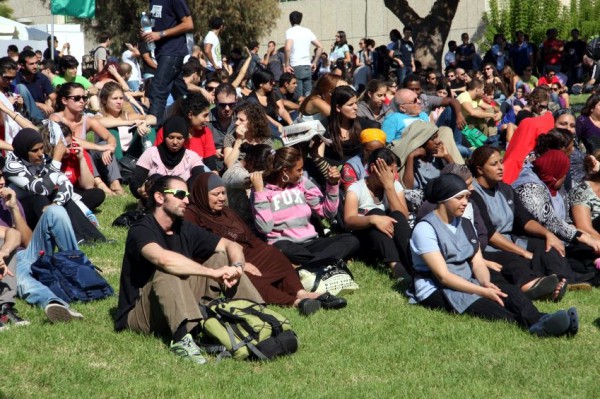 Israel is the only free country in the Middle East.  In the above photo, Arab and Jewish university students in Tel Aviv strike together in support of junior staff.

While it’s encouraging to see prestigious campuses such as Oxford rejecting the boycott motions of Israel Apartheid Week, it is important to realize that Israel is not an apartheid state, as this movement suggests.

It is utterly malicious to compare Israeli society to such a social-legal system.

What does the word “apartheid” mean?  It is a term for separation in the Dutch dialect known in South Africa as Afrikaans.

Apartheid was the name used to describe the form of society in South Africa prior to the constitutional changes of 1994 when the Mandela government came to power. 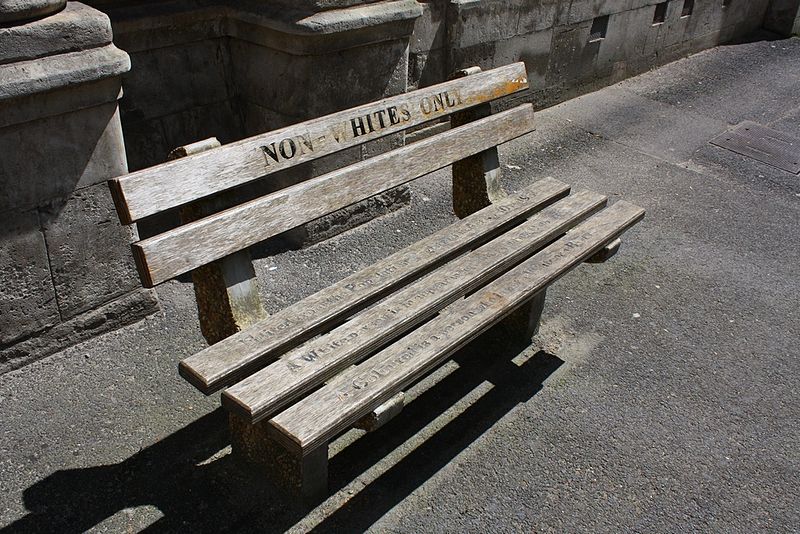 Non-whites only bench: In apartheid-era South Africa, racial segregation was enforced by law.

The system was established to separate the governing white minority from the other races that formed the majority.

Under this system, the whites completely dominated the native population, blocking people who were not white from a wide range of jobs and restricting them from living in white neighborhoods, leaving the masses living in tar-shack native communities.

All facilities were strictly separated, similar to the situation in the southern states of the US prior to the banishment of the “Jim Crow” segregation laws in 1965.Israel is by no means an apartheid state.  Anyone who has lived in or visited Israel knows that the exact opposite is the truth. 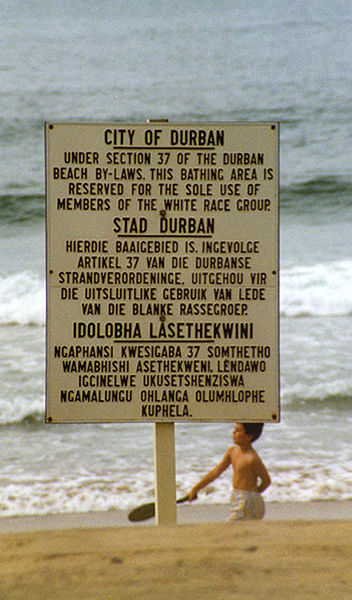 Comparing Israel to Apartheid South Africa where a racist minority regime oppressed the majority in their own land is a deceitful distortion designed to destroy Israel.  This lie belittles the suffering of millions of South Africans and has nothing to do with Israel’s actions.

Israel is completely free of apartheid practices.  In fact, of all of the nations in the Middle East, Israel is by far the most racially mixed and the most tolerant and supportive of minorities.

About one fifth of the country’s population is made up of Muslim and Christian Arabs who receive the same rights and opportunities as their fellow Jewish citizens.

All children in Israel without regard to religion or race receive subsidized education through the 12th grade.

The Middle East is typically unfavorable to women, but in Israel, women of all races and religions especially benefit from the social and political equality that exists here.

In addition to equality for women, all non-Jews (mostly Arab citizens) have the same voting rights as Jews.  Arabs even serve in the Knesset (parliament).

However, Arabs do get some special treatment when it comes to armed service.

While Israeli Jewish men must spend three years (women two years) in the Israeli Defense Forces (IDF) and then serve in the reserve until they are 50 years old, Arab service is voluntary and very few join, although numbers are increasing.

So to compare Israeli society to Apartheid South African society is totally without merit.

Israel Apartheid Week, which claims that its goal is educating the public about Israel’s ill treatment of Arabs, is in fact simply a campaign of anti-Semitism.

Rather than being an apartheid state, Israel is a haven for many minorities including legal and illegal foreign workers from the Philippines, Eritrea, Colombia, Nigeria, and several other countries, many of whom have been granted permanent residence and the rights of full citizens. 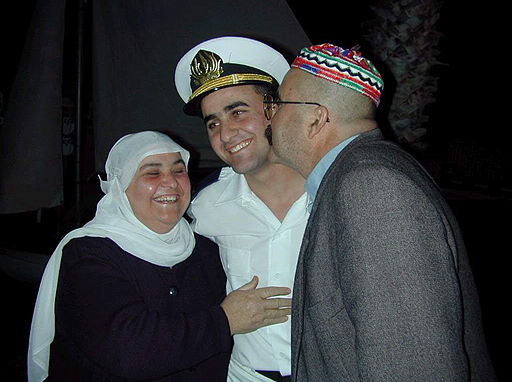 Arab Naval Officer Tamim Sa’ad celebrates with his family during a ceremony marking the end of the elite and challenging Naval Officer’s course of the Israeli Navy in Haifa.

Is the Security Fence an Apartheid Wall?

One of the pet complaints of the BDS movement is the security fence that separates Israel from the territories.  They call it the “Apartheid Wall.”

Arab residents living in the Palestinian Authority see it as an impediment to daily living.  They say it, at times, isolates them (a situation which in many cases caused the rerouting of the fence).

However, the fence successfully prevents suicide bombers and other Arab terrorists from killing and maiming innocent Israeli citizens as they sip coffee in a cafe or take a bus home from work in nearby Jerusalem.

Since its completion, there have been very few such attacks. 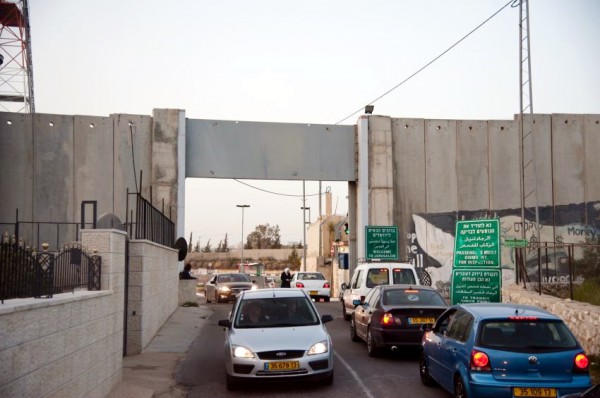 The separation barrier between Israel and the territories was built to prevent suicide bombers from infiltrating Israel.  In the above photo, cars pass through a separation barrier checkpoint that controls the movement between Bethlehem and Jerusalem.

The fence may be an inconvenience to the Arab population, but it is not a new idea in the world.  Even the US has been building a 1900 mile (3000 km) sophisticated wall across its border with Mexico.

That fence is not meant to create a racial or political apartheid state between American and Mexico; it is meant to protect US citizens from illegal drug traffic and to lessen the burden on the health and education systems serving illegal Mexican immigrants.

One can argue that Israel’s fence is even more needed than America’s fence because it protects Israel’s citizens from daily murders in buses and cafes.

So to call the Israeli security fence an “Apartheid Wall” is not merely an expression of ignorance about the nature of political apartheid; it expresses underlying anti-Semitic feelings.  (Flame) 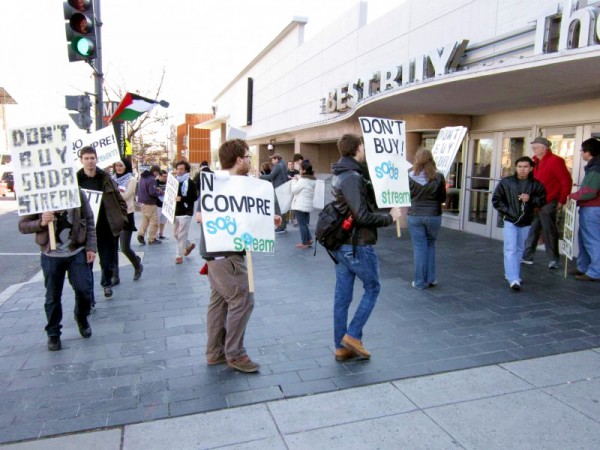 Last week in Washington D.C., protesters called for retailers to stop stocking the home carbonation devices made by SodaStream, a company accused of occupying Palestinian land in a West Bank Israeli settlement.

Apartheid propaganda such as this is being used to raise support for the anti-Israel Boycott, Divest and Sanction movement.  The goal is to destroy Israel economically.

It is clear, though, that while the nations rage against and curse Israel, God is blessing her.  The Israeli economy today is one of the strongest in the world.