Discover the Resurrection of Messiah in Bible Prophecy On Friday night, Christians remembered the night that Yeshua (Jesus) became our Passover lamb, dying on the execution stake for our sins.

Also on Friday, Jewish People and Messianic Believers celebrated the Passover Seder, which recounted the deliverance from slavery and the salvation from death for those who applied the blood of the Passover lamb to the doorposts of their homes.

When Yeshua (Jesus) died on the execution stake and became our Passover Lamb, that was not the end of Him!

Yes, He was cut off from the living for three days, but He rose from the dead and He is Alive!

Traditionally, the Rabbis believe that every Jew will be resurrected and experience spiritual life.

Chapter 11 of the Book of Hebrews describes the great men and women of faith. Some women received their dead back to life again, while “others were tortured and refused to be released, so that they might gain a better resurrection.” (Hebrews 11:35)

The Tanakh (Old Testament) also describes a resurrection from the dead and subsequent judgment.   The Hebrew prophet Daniel gives an account of what will happen in the last days:

“Multitudes who sleep in the dust of the earth will awake: some to everlasting life, others to shame and everlasting contempt.”  (Daniel 12:2; see also Isaiah 26:19 and Psalm 16:10)

And the first of those to awaken to everlasting life would be Messiah Yeshua. 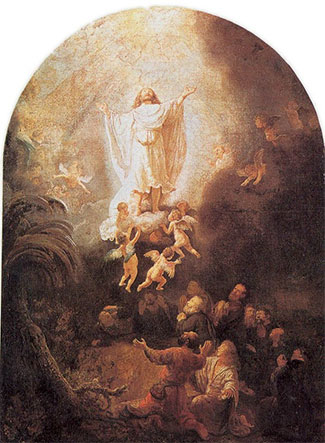 The Ascension (1636), by Rembrandt. After appearing to multitudes of people over 40 days, the risen Yeshua (Jesus), “was taken up before their very eyes.” (Acts 1:9)

Yeshua Explains His Death and Resurrection

Some have argued that what was an apparent resurrection of Yeshua’s body had been manufactured by the disciples who were trying to make Yeshua fit into the many prophecies about Messiah’s death and rising from the dead.

But, in fact, the disciples did not connect Yeshua with these prophecies until many days after He rose from the grave, even though Yeshua tried to prepare them when He said:

“We are going up to Jerusalem, and the Son of Man will be delivered over to the chief priests and the teachers of the law.  They will condemn Him to death and will hand Him over to the Gentiles to be mocked and flogged and crucified. On the third day He will be raised to life!”  (Matthew 20:18–19; see also Mark 8:31) 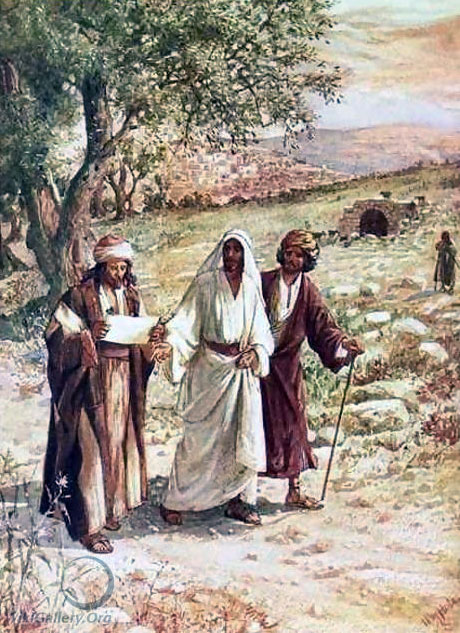 In Luke’s story of the appearance of the Messiah on the road to Emmaus, Yeshua interpreted the prophetic writings about Himself to His disciples saying:

“‘Did not the Messiah have to suffer these things and then enter his glory?’ And beginning with Moses and all the Prophets, He explained to them what was said in all the Scriptures concerning Himself.”  (Luke 24:26–27)

Perhaps Yeshua explained to those men prophetic Scriptures, such as these:

Prophecy:  The Messiah would be rejected:  “He was despised and rejected by mankind, a man of suffering, and familiar with pain.  Like one from whom people hide their faces he was despised, and we held him in low esteem.”  (Isaiah 53:3; see also Luke 17:25; 1 Peter 2:7)

Prophecy: The Messiah would bear the punishment and curse of sin under the law:  “For He was cut off from the land of the living; for the transgression of my people He was punished.”  (Isaiah 53:8; Luke 24:46; 1 Corinthians 15:3–4) 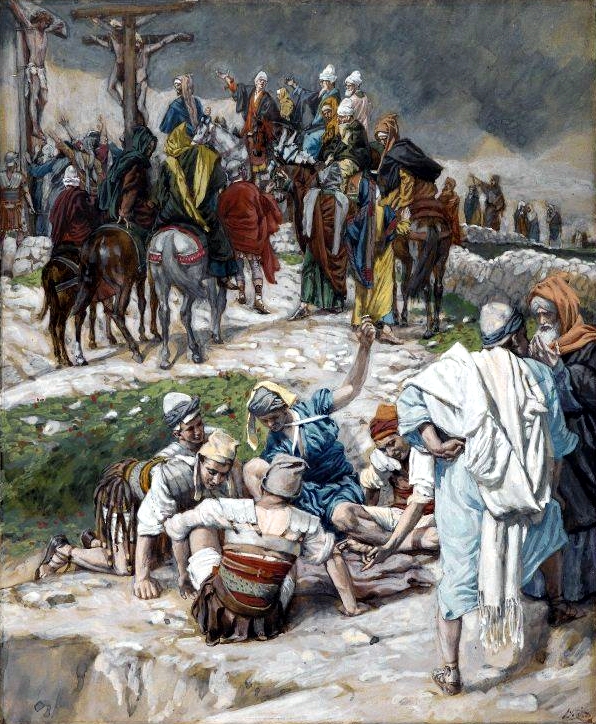 Prophecy:  His hands and feet would be pierced and lots would be cast for His garments:  “Dogs surround me, a pack of villains encircles me; they pierce my hands and my feet.  All my bones are on display; people stare and gloat over me.  They divide my clothes among them and cast lots for my garment.”  (Psalm 22:16–18; see also Luke 24:40; Matthew 27:35)

Prophecy:  The Messiah would pay the ransom price for our death due to sin:  “Shall I ransom them from the power of Sheol?  Shall I redeem them from death?  O Death, where are your thorns?  O Sheol, where is your sting?”  (Hosea 13:14; see also Mark 10:45)

Once Yeshua explained the prophecies that foreshadowed His death and resurrection, the hearts of these two men burned; they hurried to the other disciples to proclaim,  “It is true! The Lord has risen.”  (Luke 24:32–34)

Similarly, when prophecies are presented and explained (as our Messianic Prophecy Bible will do) and hearts are open to receiving truth, the identity of the Messiah becomes clear.

Despite their new understanding of Messianic prophecy, the talmidim still would not be empowered to boldly proclaim that understanding until the Feast of Shavuot (Pentecost) some 50 days later.  On that day, the Ruach HaKodesh (Holy Spirit) filled the disciples, empowering them with greater prophetic insight and knowledge. 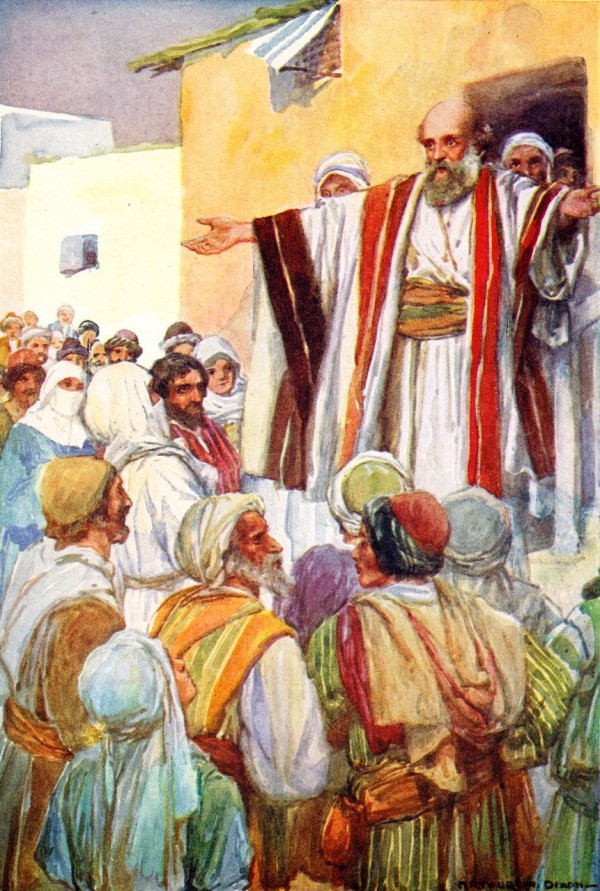 Peter Preaches to the Jews on Pentecost, by Arthur Dixon

On Shavuot, full of the Ruach, Peter explained to many hundreds of Jewish people how King David foresaw the Messiah’s victory over death through His resurrection:

“Fellow Israelites, I can tell you confidently that the patriarch David died and was buried, and his tomb is here to this day.  But he was a prophet. …  Seeing what was to come, he spoke of the resurrection of the Messiah, that He was not abandoned to the realm of the dead, nor did His body see decay.

“God has raised this Yeshua to life, and we are all witnesses of it.  Exalted to the right hand of God, He has received from the Father the promised Holy Spirit and has poured out what you now see and hear.”  (Acts 2:29–33; see Psalm 16:8–11 for David’s prophecy)

David’s prophetic insight gives us all hope.  We, therefore, can proclaim in the words of Job:  “I know that my redeemer lives, and that in the end He will stand on the earth.  And after my skin has been destroyed, yet in my flesh I will see God.” (Job 19:25–26)

Because of God’s great plan of redemption as prophesied throughout Scriptures, Yeshua suffered for our sins and gained victory over both sin and death through His own death and resurrection.  Because of Him, we can enter into eternal life.