“I will surely gather all of you, Jacob; I will surely bring together the remnant of Israel.  I will bring them together like sheep in a pen, like a flock in its pasture; the place will throng with people.”  (Micah 2:12)

Jenna and Gil Lewinsky, both 31, live 43 miles east of Vancouver, British Columbia, where they have raised 130 Jacob sheep, which they believe should return to the Holy Land since the breed disappeared there long ago.

“It would be a very important and historic moment when the sheep return after basically 2,000 years,” Jenna Lewinsky said.

Gil Lewinsky connected their return to Bible promises.  “For 2000 years we [Jewish people] have been yearning to go home, and then when we look at the story of the Jacob Sheep, we found another piece of the puzzle.  In Jeremiah 31, it talks not only about the return of man to a renewed State of Israel but the return of animal (shepherds and their flocks).  So the return of the “animal” is a very important part of our national story.”  (Friends of the Jacob Sheep)

“They will come and shout for joy on the heights of Zion; they will rejoice in the bounty of the Lord — the grain, the new wine and the olive oil, the young of the flocks and herds.”  (Jeremiah 31:12) 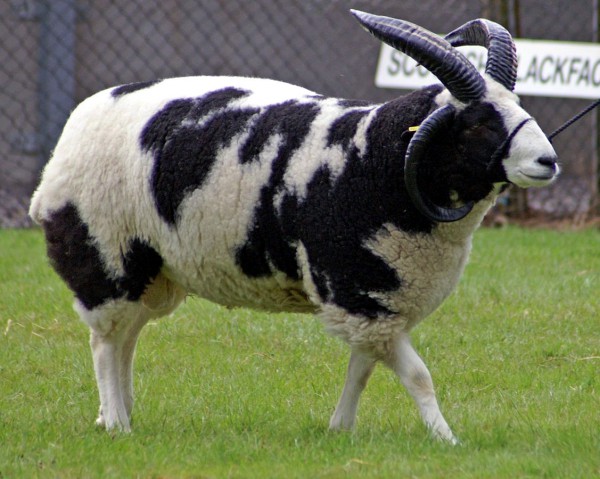 A Jacob sheep at the Royal Show in Stoneleigh Park, Warwickshire, England.  (Photo by David Merrett)

The Lewinskys began their herd with a few Jacob sheep given to them in 2014 by a heritage farmer.  The Lewinskys now possibly own the largest single herd of the 5,000 Jacob sheep in existence today, according to a count by Modern Farmer.

“It’s a Jewish value to conserve animals, repair the world and bring back this lost heritage to the Jewish family,” Gil Lewinsky told The New York Times.  “They are the only sheep breed in the world to produce spots and speckles in offspring,” he added.  (BIN)

The sheep commonly feature two sets of horns, with two large ones pointed up and angled backward, and a smaller pair curving downward framing the face. 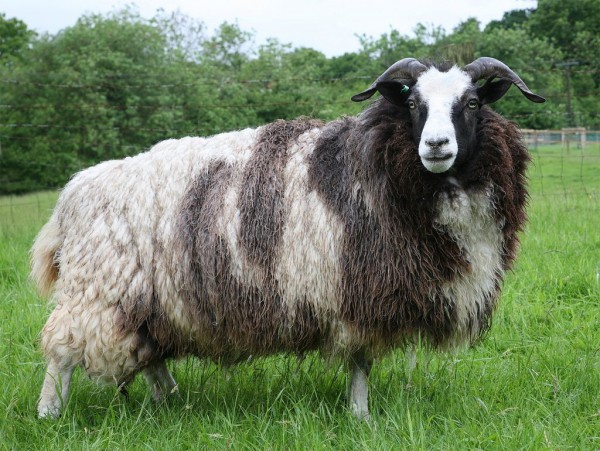 A Jacob ewe in full fleece (Photo by John from Wareham Dorset, England)

The Lewinsky’s herd, which is destined for the Golan Heights in northern Israel, is thought to have descended from sheep whose emigration route led them through Europe and into North America.  The sheep’s Israeli heritage, therefore, draws from the Biblical record of Jacob’s wages, when he worked for his uncle Laban.  (NYT)

Through the 20 years that Jacob worked for Laban, his wages changed 10 times.  On one occasion of negotiating new terms, Jacob tried to clearly distinguish between Laban’s flocks and the sheep and goats that would be given to him in payment:

“Let me go through all your flocks today and remove from them every speckled or spotted sheep, every dark-colored lamb and every spotted or speckled goat.  They will be my wages.”  (Genesis 30:32) 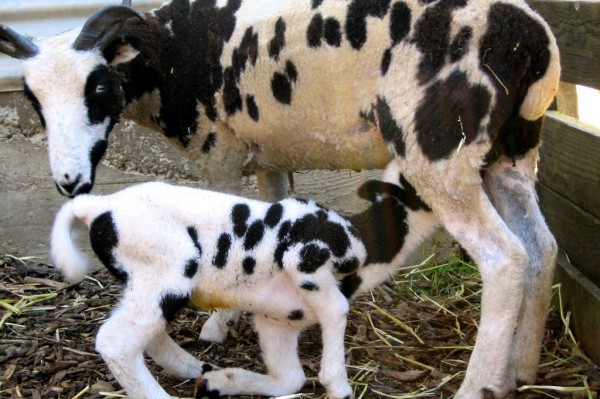 A Jacob ewe nursing her lamb.  (Photo by Brooke)

The splotchy sheep are likely to be the first livestock imported into Israel from Canada, after the Israel Agriculture Ministry amended its position on Canadian livestock imports late last year.  Before the ministry’s position reversal, the Embassy of Israel in Ottawa, Canada, had provided the ministry “strong recommendations” in support of the Lewinskys’ proposal.  (Guardian)

“The idea was very, very nice and of course we said, ‘Let’s push it,’” said Weiss.  “The ambassador visited Israel.  He met some people with the minister of agriculture [Rafael Eitan] and issued a letter [of support].”

Israeli Ambassador Rafael Barak issued his letter after being present for the birth of a lamb at the couple’s farm in Abbotsford, British Columbia.  Weiss added that the sheep agreement would open the way for more live-animal trade between Israel and Canada. 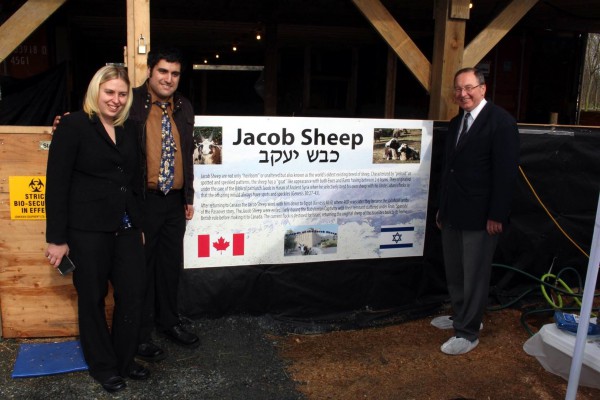 Before venturing into shepherding, Mrs. Lewinsky worked for the Israel Ministry of Foreign Affairs, while her husband worked for The Jerusalem Post in Israel.

“We were not born shepherds,” Mrs. Lewinsky told The New York Times.  “We had to learn everything from scratch.”

Besides the sheep’s link to the Holy Land, this breed of sheep may hold hope for those who suffer from Tay-Sachs, a rare genetic disorder with increased prevalence in Ashkenazi Jewish people.  Jacob Sheep can also suffer from this and may be useful for clinical trials of gene therapies that in the future could be useful in the treatment of the disease in humans.