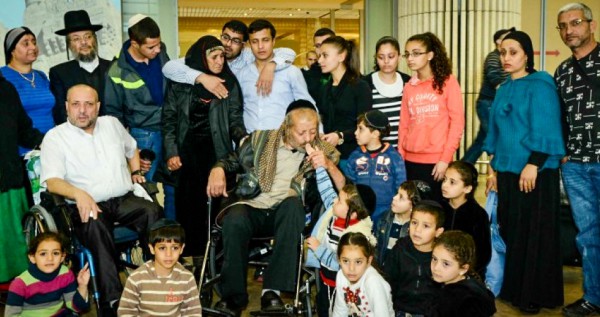 “Then they will know that I am the LORD their God, for though I sent them into exile among the nations, I will gather them to their own land, not leaving any behind.”  (Ezekiel 39:28)

God continues to restore His people to the Holy Land in fulfillment of end-time Bible prophecy.  The Jewish Agency for Israel succeeded last week in covertly transporting 19 Yemenite Jews to Israel for aliyah (immigration), with the United States Department of State lending a hand after the immigrants were abused en route.

“Some two hundred Jews have been secretly rescued from Yemen by The Jewish Agency in recent years, including several dozen in recent months, as attacks against the Jewish community have increased and the country has descended into civil war,” the Jewish Agency stated.

These attacks against the Jews of Yemen have risen sharply since 2008.  They include the murder in 2008 of Jewish teacher Moshe Yaish Nahari in the city of Raydah; the murder of Aharon Zindani in 2012; and the abduction, forced conversion, and forced marriage of a young Jewish woman to a Muslim man.

Five of Zindani’s relatives, including his son, have now immigrated to Israel, as of last week’s airlift operation.  A final 40–50 Jews remain in Yemen, most in a guarded compound near the United States embassy in the city of Sana’a. 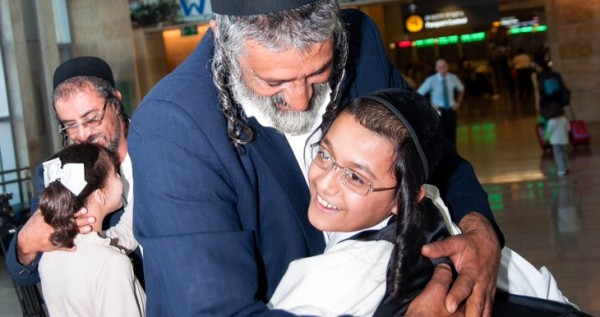 Because the new Israeli immigrants hail from Sana’a and Raydah, both cities ruled by pro-Iranian Houthi militias, the secret airlift left many angry in Yemen.  Protesters have claimed that the operation stemmed from an arrangement between Israel and the Houthis.

Anti-Zionists also launched a social-media campaign after last Sunday night’s airlift, claiming that “the Houthis are Israeli agents.”  Meanwhile, the Houthi logo features the phrases “Death to Israel” and “Damn the Jews.”  (JPost)

The social-media campaigners also accused the Jewish immigrants of stealing Yemenite “heritage” — referring to a 500-to-800-year-old Torah scroll that the rabbi of the Raydah community, Saliman Dahari, took to Israel in the operation, along with his wife and parents.

Britain’s Jewish Chronicle reported that a Muslim airport worker and a Jewish man were arrested for helping smuggle the scroll from Yemen.  Apparently, the Yemen government considers the Jewish artifact property of Yemen.

“The rabbi of Raydah, who came to Israel this week along with the last remaining members of his community, brought the Torah with him and has been proudly and openly sharing this cherished part of his community’s rich religious heritage.  The Jewish community of Raydah has thus come to an end.

“The notion that the Torah should have been left, without protection, in a country torn apart by a violent civil war involving several parties that are viciously hostile to Jews, is preposterous.  The Torah is part of the proud heritage of Yemenite Jewry and that heritage will live on in the state of Israel,” Jewish Agency spokesperson Avi Mayer said. 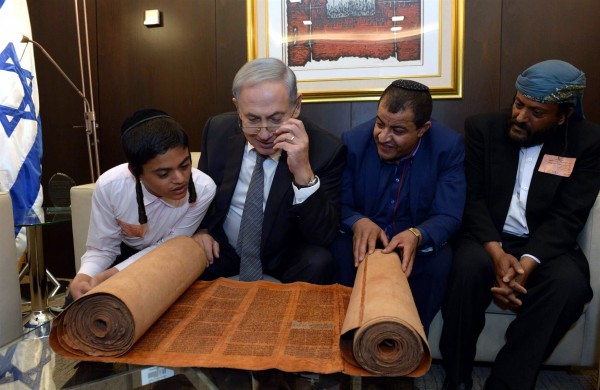 Israeli Prime Minister Benjamin Netanyahu looks at an 800- year-old Torah scroll rescued from Yemen as he meets with Yemenite Jews who were covertly brought to Israel.  (GPO Photo by Haim Zach)

The United Nations has described the state of the gulf nation as a potential “humanitarian catastrophe.”

Meanwhile, the Sunday-Monday aliyah operation served as the final stage of official airlift missions from Yemen.

“This is a highly significant moment in the history of Israel and of Aliyah,” said Natan Sharansky, the chairman of The Jewish Agency for Israel, after the operation.

Highlighting the Jewish presence in Yemen, Sharansky said, “This chapter in the history of one of the world’s oldest Jewish communities is coming to an end, but Yemenite Jewry’s unique, 2,000-year-old contribution to the Jewish people will continue in the State of Israel.” 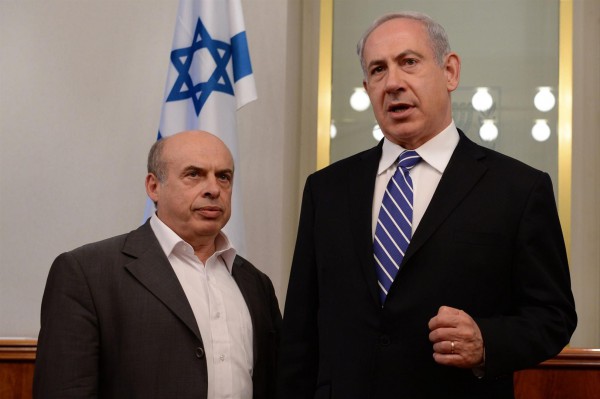 Natan Sharansky (left) recently celebrated the 30th anniversary of being released from a Soviet prison.  He was imprisoned after making an application for Aliyah to Israel.  Sharansky was a leading figure in the fight to allow Soviet Jews to make Aliyah.

Others expressed sadness for the end of Yemenite history, including Sarah Levin of Jews Indigenous to the Middle East and North Africa.

“We praise the Jewish Agency for diligently working to assist the last Jews of Yemen, affirming the State of Israel’s important role in providing rescue and refuge to endangered Jewish communities in the Middle East and beyond.  With far fewer than 75 Jews remaining in Syria, Yemen and Iraq, we feel a sense of sadness and loss as the gates of our pilgrimage sites, holy burial sites, cemeteries, synagogues and Jewish quarters will be forever closed marking an end to over 2,500 years of continuous Jewish history,” she said.  (JPost)

Israel has helped more than 51,000 Yemenite Jews immigrate to Israel since 1948, with the largest transfer occurring in 1949 — in Operation On Wings of Eagles, also known as Operation Magic Carpet.