“… they will feast on the abundance of the seas, on the treasures hidden in the sand.”  (Deuteronomy 33:19)

In an agreement that underscores the possibility of real peace in the Middle East while solving environmental problems at the Dead Sea, Israel and Jordan agreed Thursday to undertake a $900 million water project.

A desalination plant will be built in the Gulf of Aqaba with a pipeline that will carry the brine (saltwater) byproduct from the Red Sea to the shrinking Dead Sea.

“This is the most important and significant agreement since the peace treaty with Jordan,” said Israel’s regional cooperation minister and the water deal’s Israeli signatory, Silvan Shalom.  “This is the peak of fruitful and very good cooperation between Israel and Jordan and will assist in rehabilitating the Dead Sea and in resolving water issues in Jordan and the Arava (in Israel).”  (Forward) 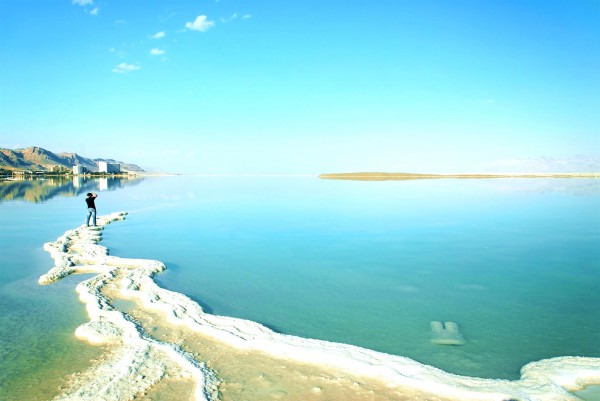 For thousands of years, the reputed healing properties of the Dead have attracted visitors from around the Mediterranean basin.  In fact, King Herod established one of the world’s first health resorts here.  The wealth of the lake has supplied a wide variety of products, from balms for Egyptian mummification to potash for fertilizers.  In the above photo, a photographer walks out on a salt formation to snap a picture.

The Two Seas Canal agreement signed on February 26, 2015, will pour more than 80 million cubic meters of fresh water per year into Israel’s Arava region and into Aqaba, Jordan, with Israel in agreement to purchase half the Aqaba plant’s output at cost.

The Israel-Jordan water accord also green-lights the building of 125 miles of pipeline along the Jordan-Israel border for brine transfer to the Salt Sea, as well as another pipeline to draw water from northern Israel into Amman.  The entire Seas Canal project is expected to take almost three years.

The World Bank determined in 2013 that the idea to use the Red Sea to restore the Dead Sea was viable. 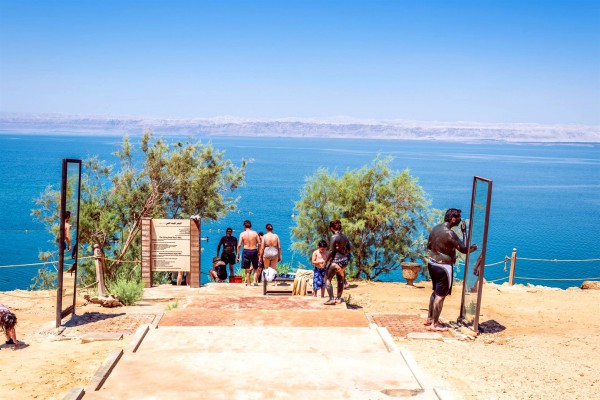 As the lowest point on Earth, the Dead Sea is considered one of the natural wonders of the world, its waters and minerals have been long renowned for their healing properties.

Dead Sea minerals have been used for skin-rejuvenation products for years, its mud and salt  are the essential ingredients of the AHAVA health- and beauty-product line.

But for all the body lotions, anti-aging skincare and sun-care products that draw from the Dead Sea’s top-grade minerals, such as potash and bromide, the Salt Sea (direct translation from the Hebrew name, Yam HaMelech) has been shrinking for years.

With the influx of brine from the Aqaba Gulf water plant, the Dead Sea, might flourish once again, averting a much feared “environmental catastrophe,” which Smithsonian Magazine writer Joshua Hammer warns is already in progress. 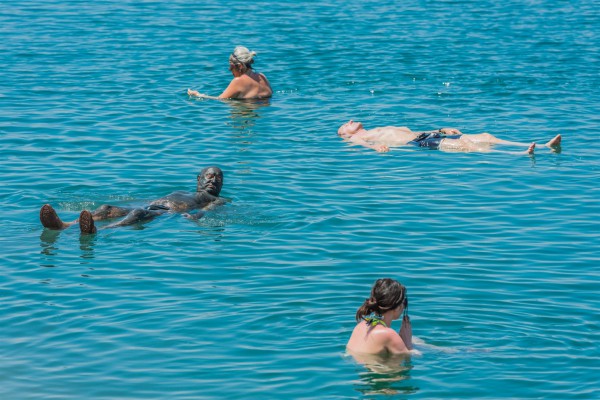 The concentration of salt is so high in the Dead Sea, that swimming becomes similar to floating.

The Dead Sea not only has faced its own extinction, it also has become a perilous place for visitors who venture too far, with sinkholes—some more than 60 feet deep along the expanding seashore.

“The Dead Sea is shrinking, and as it recedes, the fresh water aquifers along the perimeter of the lake are receding along with it,” Hammer writes.

“As this fresh water diffuses into salt deposits beneath the surface of the shoreline, the water slowly dissolves the deposits until the earth above collapses without warning.  More than 1,000 sinkholes have appeared in the past 15 years” he said.

Overnight guests of the Lowest Point on Earth also find their “seaside” hotels miles from the water.

Hammer notes that the Ein Bokek hotel chain that hosts Dead Sea guests does not even sit in front of the natural wonder—instead visitors float in a reservoir continually “filled” by Israeli company Dead Sea Works, pumping water from the sea that has moved further and further away—one meter per year.  (Reuters)