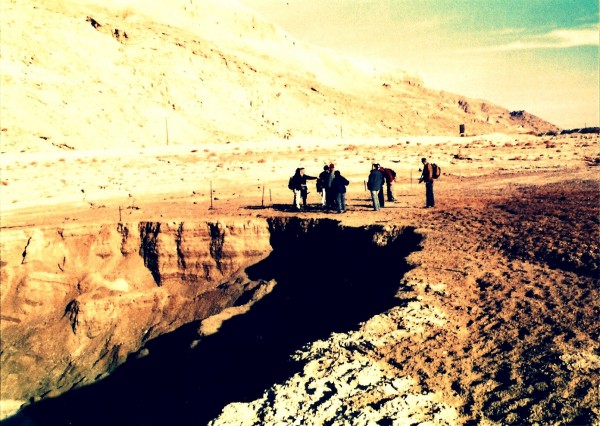 Men stand on the edge of a Dead Sea sinkhole.  (Photo by Asaf Antman)

“Living water will flow out from Jerusalem, half of it east to the Dead Sea and half of it west to the Mediterranean Sea, in summer and in winter.”  (Zechariah 14:8)

The salty, mineral rich waters of the Dead Sea (Hebrew: The Salt Sea—Yam HaMelach) have drawn visitors and health pilgrims for millennia.

Recently, however, dangerous Dead Sea sinkholes have been rapidly appearing along the sea’s banks as the water level recedes, posing a major threat to the area’s inhabitants, visitors, landscape, and tourism in general.

At 423 meters (1,388 ft) below sea level, the Dead Sea has about 34 percent salinity along with strong concentrations of sulfates and bicarbonates down to 130 feet and magnesium, potassium, chlorine, and bromine at 130–330 feet.  (Britannica)

These minerals feed a thriving health industry, and the Dead Sea was first used as a health resort by King Herod.  Floating on the waters is thought to help treat people with skin diseases and muscular issues. 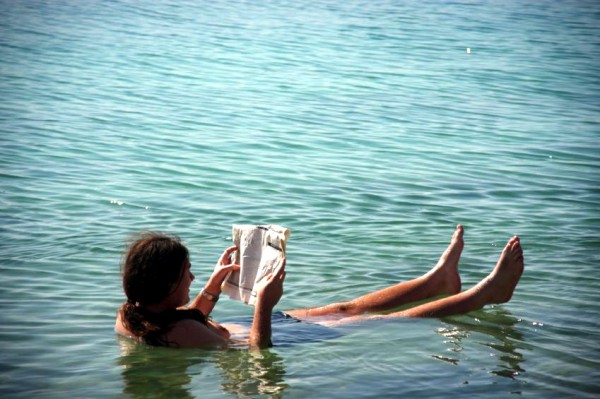 A tourist enjoys the unique characteristics of the Dead Sea.  Because about 34% of the sea is actually salt—roughly nine times saltier than the ocean—normal swimming is difficult.  Floating, on the other hand, is so easy you can read a newspaper while in the water.

The site’s beautiful waters with their natural buoyancy attract day trekkers and overnight tourists to the Sea’s resorts; nevertheless, the famed tourist destination has become treacherous with new sinkholes swallowing roads and buildings without warning.  (BIN)

The gaping chasms now form a pocketed landscape along the shores of the site as water levels drop at a rate of three feet per year.  The number of annual tourists is also dropping by the thousands—stoking fears that if the sea is not drying up, its hospitality industry is.

“We are a small kibbutz and this resort was our supporting pillar, economically but also socially,” said resort manager Avi Cohen, to NBC News.  “This was a shock for us but slowly we are picking up the pieces and expect the country to help us out.” 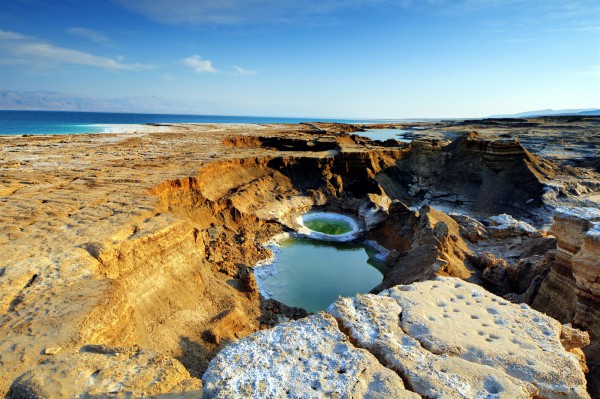 Dead Sea sinkholes can swallow buildings and roads without warning.

While no one has died yet from these sinkholes, “if nothing is done, it’s only a matter of time,” Israeli Director of EcoPeace Middle East Gidon Bromberg told ABC News, citing the holes as “unpredictable and very dangerous.”

The sinkholes, which can reach 80 feet deep and 130 feet wide, are the result of fresh groundwater that dissolves the salt left in the sand as the water recedes. Underground cavities are then created.  When the weight of the ground surface can no longer be supported above the cavity, it collapses and a sinkhole forms.  (livescience)

Over 5,000 sinkholes have appeared since the 1980s with one or more materializing almost every day.  Warning signs are posted in known sinkhole areas around the Dead Sea; but in June 2009, an Israeli hiker fell into one that formed in an unmarked zone, and was critically injured.

In another case, described by National Geographic, geologist Eli Raz was documenting one sinkhole when he fell into another that formed as he worked.

“I just can tell you that it was terrible, very frighten[ing]; and in the first place, in the beginning, I started to write my will—without knowing that somebody will find it of course,” said Raz, who spent 14 hours in the hole before being rescued. 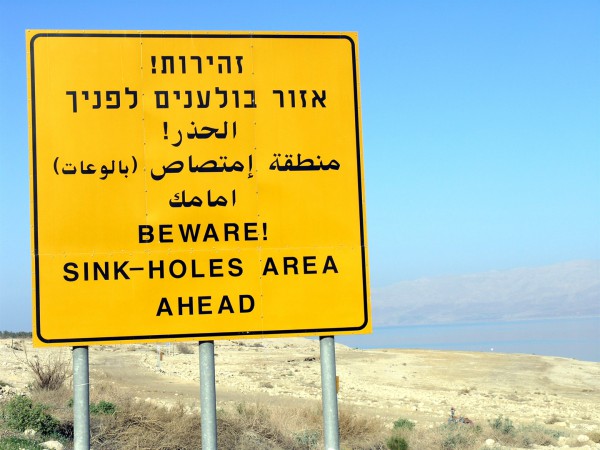 Warning that Dead Sea sinkholes lay ahead.  (Photo by חזרתי)

The receding water line is not only a result of large-scale evaporation.  Diversion of the Jordan River into crops and drinking water has reduced the flow of water into the sea to 20% of the 450 billion gallons of water that used to feed the sea.  As well, mineral mining in the south removes water and minerals.  (Times of Israel)

An attempt to help replenish the sea’s water began last month with the launch of the 3-year Dead-Red Sea Canal project that will divert salt water into the sea, which will be a byproduct of a desalination plant along the canal system.

It is evident, however, that this body of water that lies between the hills of Judea on the west and Transjordan on the East needs real healing, and, indeed, the Prophet Ezekiel foretells that it will be fully restored when the Third Temple is built and the Glory of God returns to the Temple.

“He said to me, ‘This water flows toward the eastern region and goes down into the Arabah, where it enters the Dead Sea.  When it empties into the sea, the salty water there becomes fresh [וְנִרְפּ֥וּ, which is from the verb to heal—rapha, רָפָא].’”  (Ezekiel 47:8)