Behar-Bechukotai: Exile or Living in the Blessings in the Holy Land

Last week, in Parasha Emor, God called the Kohen (priests) to live lives that expressed a greater measure of holiness.  It also described seven essential festivals that are fundamental to Israel’s walk with the Lord.

In this week’s Torah portion, God gives to Moses the laws concerning the Shemitah or Sabbatical year. 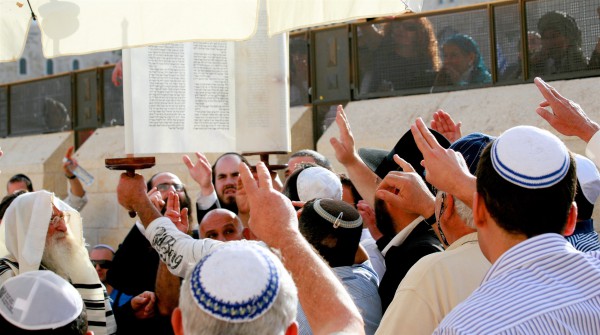 Men reach out to pay respect to the Torah as it is raised at the Western (Wailing) Wall in Jerusalem.  (Photo by opalpeterliu)

The Year of the Shemitah

God commands Israel to observe the Shemitah every seventh year, a Sabbath for the land.  According to these laws, crops are not to be planted, tended, or harvested, and all agricultural activity is prohibited, although anyone can eat what the land produced naturally.

Israel observes this commandment today, and this year happens to be a Shemitah.  While traveling down the highway from Jerusalem to Tel Aviv, we observed signs posted in several unkempt and overgrown fields along the side of the road saying (in Hebrew), “We observe the Shemitah year here.”

Of course, this rest parallels God’s rest after creating the universe, as well as the Shabbat.

In Judaism, “seven” signifies a completion as well as holiness.  It is considered the “all-encompassing number that celebrates the sacred purpose of a Jew to infuse holiness into the whole of Creation.”  (Jewish Wisdom in the Numbers) 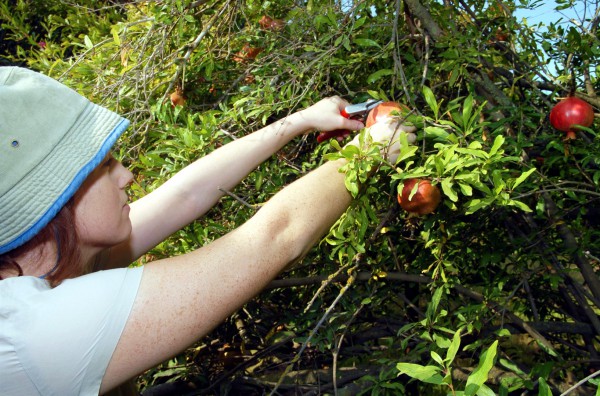 The Land of Israel is to be the Holy Land.  Our behavior toward one another should portray a holy people living in the Holy Land.

God warns His people not to cheat, defraud or take advantage of one another and forbids them to charge interest on money loaned to a fellow Israelite.  God wants us to deal fairly with each other and practice business integrity.

God also makes it clear that He holds the title deed to this land and does not give us the authority to sell it permanently.

We are only residents on this land that God has given us to live in as pilgrims and strangers.  That means the leaders of Israel have no right to sell off portions of the Land to the enemy in exchange for false promises of supposed peace.

“The land must not be sold permanently, because the land is Mine and you reside in My land as foreigners and strangers.”  (Leviticus 25:23) 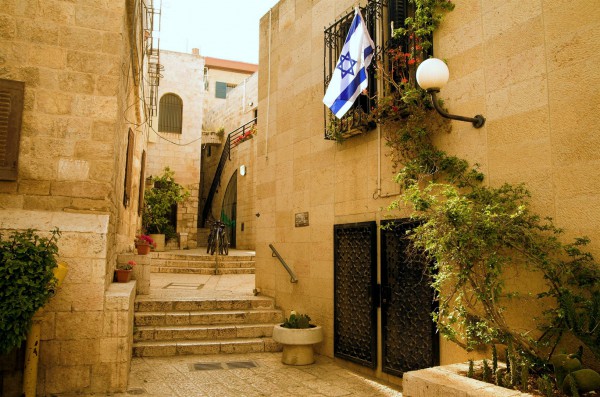 The Jewish Quarter in the Old City of Jerusalem.  (Israel Photo Gallery by Noam Chen)

“Consecrate the fiftieth year and proclaim liberty throughout the land to all its inhabitants.  It shall be a jubilee [יוֹבֵל Yovel] for you; each of you is to return to your family property and to your own clan.”  (Leviticus 25:10)

After every seven cycles of seven years, in the fiftieth year, the shofar is to sound and the Yovel (יוֹבֵל) or Jubilee year is to be celebrated.  Not only is the land to lie fallow, but also all debts are to be cancelled and all indentured servants are to return to their land and family.

We serve a God of kindness and mercy, and His laws are for the good of all—even for the land itself.

Although some among the Jewish People might have endured a time of servitude, they were not to permanently remain in that situation.  It is because God brought His people out of slavery in Egypt that no Israelite was to become a permanent slave of another.  In the year of Jubilee, all were to be redeemed and released.

In Judaism, 50 is the number of transcendence.  It indicates a return to God and the emergence of a new creation.

Under the Brit Chadashah (New Covenant ), which was sealed with the giving of the Ruach HaKodesh (Holy Spirit) on Shavuot (Pentecost) 50 days from Passover, Yeshua HaMashiach (Jesus the Messiah) became our spiritual Jubilee.  In Him, all debts are cancelled.  He has redeemed us from slavery to any kind of oppression and empowered us to walk in holiness with our heads held high.  Halleluyah! 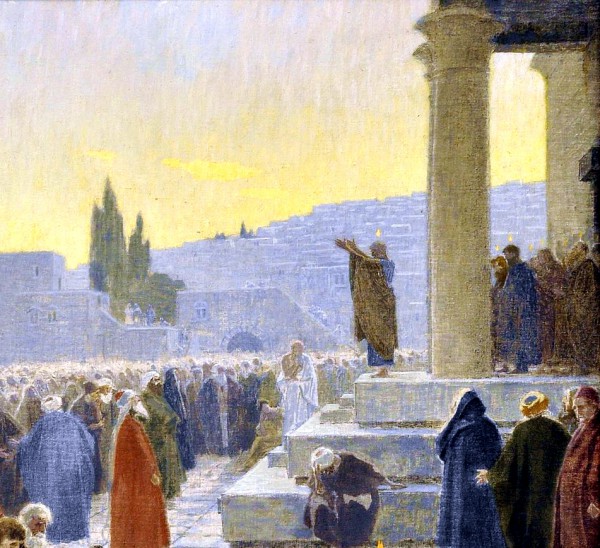 The Pentecost Sermon, by Gebhard Fugel

Living in the Blessings in the Holy Land

In the Bechukotai (In My Statutes) portion of this week’s reading, God promises a blessing upon the people if they obey His commandments in the Torah—but He warns of punishment, persecutions and even exile for disobeying them.  He says:

“If you walk in My statutes [Im bechukotay teileichu], I will give you your rains in their season, and the land shall yield its increase.”  (Leviticus 26:3–4)

We must keep in mind that God does not willingly afflict or grieve us; He only does so when it is absolutely necessary to get our attention so we can see the error of our ways and, through His mercy, put our feet back on the right path.

“For if He causes grief, then He will have compassion according to His abundant lovingkindness.  For He does not afflict willingly nor grieve the children of men.”  (Lamentations 3:32–33)

One of the reasons that the Jewish People were sent into exile and the land lay barren was because they failed to keep the Sabbatical years.  Therefore, God forced the people out so the land could finally enjoy its Sabbaths and make up for those it did not have when Israel lived there: 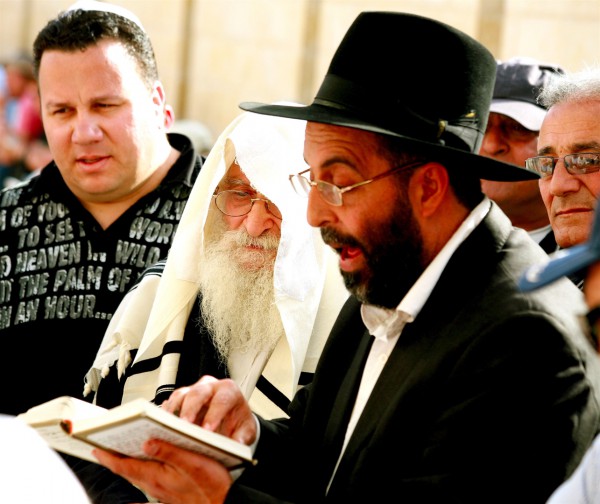 An ultra-Orthodox Jewish man prays at the Western (Wailing) Wall.  (Photo by opalpeterliu)

Despite there being severe consequences to not keeping God’s statutes, He promises to have mercy on the Jewish People even in exile; to remember His covenant with Abraham, Isaac and Jacob; and to remember the Land:

“Yet in spite of this, when they are in the land of their enemies, I will not reject them or abhor them so as to destroy them completely, breaking My covenant with them.  I am the Lord their God.  But for their sake I will remember the covenant with their ancestors whom I brought out of Egypt in the sight of the nations to be their God. I am the Lord.’”  (Leviticus 26:44–45)

Twenty-five hundred years after God brought back the Jewish exiles in Babylon to the Land of Israel, He is doing it again.

But some claim that the modern state of Israel is a nation made solely by the efforts of the League of Nations and the United Nation and not by the hand of God. 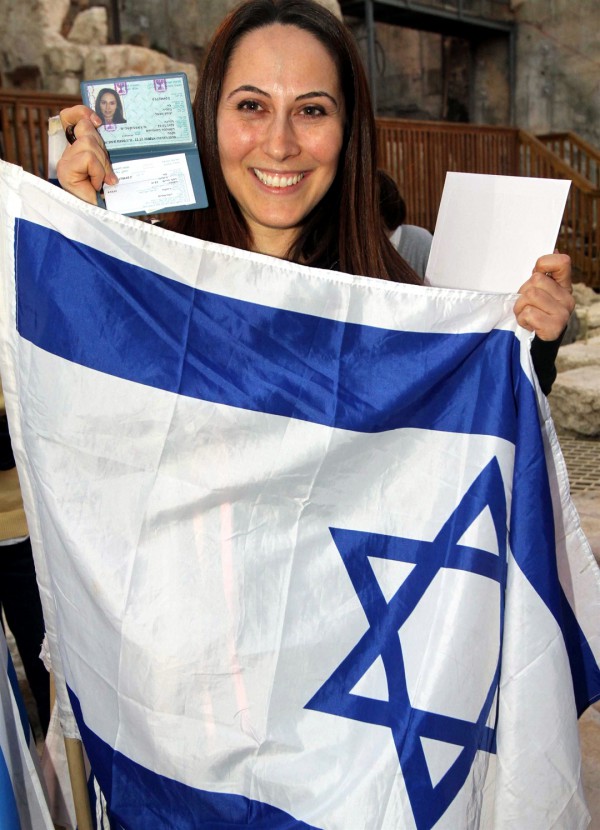 A woman holds up the Israeli flag and her new Israel identification after making Aliyah.  (Jewish Agency photo by Brian Hendler)

Yet, we know from history that no one can bring God’s people out of exile until God makes it so.

He brought them out of Egypt despite the hard heart of Pharaoh.  He released the exiles in Babylon through the decree of King Cyrus after a specified time, which were both prophesied (Isaiah 44:28–45:1; Daniel 9:2).

In the 20th century, He brought His people home through the Balfour Declaration and the creation of the State of Israel in one day, which was also prophesied (Isaiah 66:8).

And God is continuing to enact a modern-day revival of Israel that has included miraculous victories in the 1948 War for independence in 1948, the Six Day War in 1967, and the Yom Kippur war in 1973.

Despite anti-Semitism, anti-Zionism, and anti-Israelism, Israel is still alive and vibrant.  And it continues to be a blessing to the world despite the social, political, and physical attacks by her neighbors and by the world since her rebirth.

When we examine all the “independent” events culminating in the formation of an independent Jewish state, we see that God will never allow the Jewish People to be destroyed completely, nor will He ever break His covenants with them. 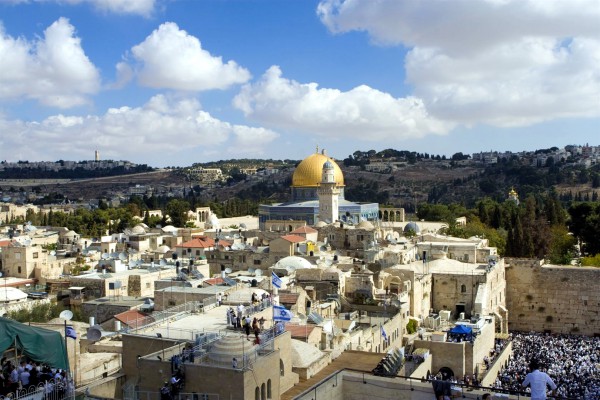 Crowds gather at the Western (Wailing) Wall in Jerusalem.  Above the Wall is the Temple Mount.  Just to the left of the Western Wall is the Muslim Dome of the Rock, which is thought to occupy the spot where the First and Second Jewish Temples were located.

Prophetic Portion: Trust in God Alone for Your Blessings

The Haftarah (prophetic portion) for this week (Jeremiah 16:19–17:14) continues with the theme of promised blessings for obedience and punishment for disobedience.

Because God alone is the One who grants freedom and blessings according to His covenants, the Prophet Jeremiah promises that those who place their trust in man will become desolate and alone:

“Cursed is he who trusts in man, who makes mere flesh his strength, and turns his thoughts from the Lord.  He shall be like a bush in the desert.”  (Jeremiah 17:5–6)

On the other hand, “blessed is the one who trusts in the LORD, whose confidence is in Him.  They will be like a tree planted by the water that sends out its roots by the stream.  It does not fear when heat comes; its leaves are always green.  It has no worries in a year of drought and never fails to bear fruit.”  (Jeremiah 17:7–8)

There is a sense of accountability in these blessings and curses; we are accountable for our actions, which have consequences.  We are responsible, and this knowledge informs our choices and helps us move forward in our daily walk with the God of Israel.

This Haftarah ends with the beautiful proclamation that God alone is the hope of Israel, source of life-giving water, healer and Savior.  When we rely on and obey God, He will not fail us, and we will walk in the blessings.

“LORD, you are the Hope of Israel; all who forsake you will be put to shame.  Those who turn away from you will be written in the dust because they have forsaken the LORD, the spring of living water.  Heal me, LORD, and I will be healed; save me and I will be saved, for you are the one I praise.”  (Jeremiah 17:13–14) 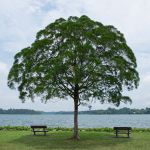