Shavuot (Pentecost): Your Destiny and the Power to Fulfill It

“From the day after the Sabbath, the day you brought the sheaf of the wave offering, count off seven full weeks [shavuot].  Count off fifty days up to the day after the seventh Sabbath and then present an offering of new grain to the Lord.”  (Leviticus 23:15–16) 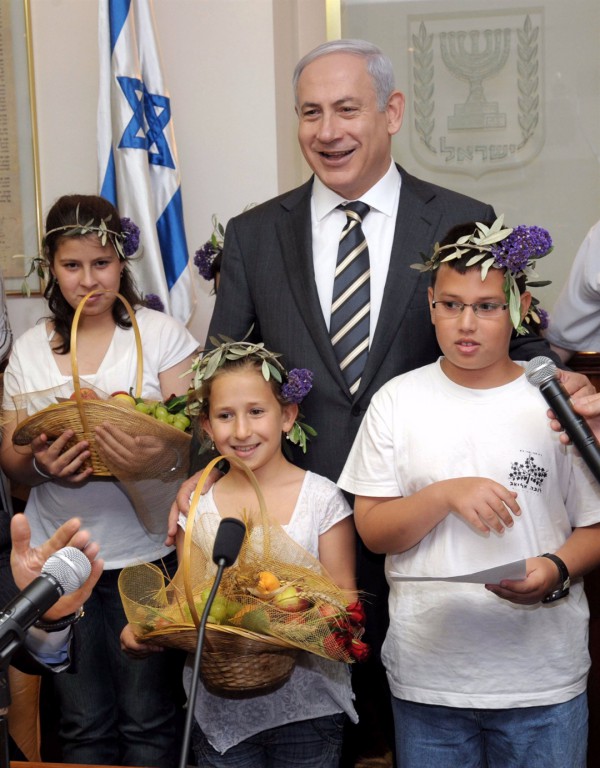 Let’s Prepare Ourselves for Shavuot!

Tomorrow, before the onset of Shabbat, Jewish people all over the world will adorn their houses and synagogues with flowers and greenery in anticipation of Shavuot (Feast of Weeks), which begins this Saturday night.

Shavuot marks the completion of the seven-week period called Counting the Omer, which occurs between Passover and Shavuot.

Indeed, on this very day almost 2000 years ago, when the Jewish people celebrated the Feast of Shavuot (Weeks) in the Temple and the new grain offering was presented to the Lord, God poured out the promised Ruach HaKodesh (Holy Spirit) on the first Believers in Yeshua.

“Do not leave Jerusalem, but wait for the gift my Father promised, which you have heard me speak about. …  But you will receive power when the Holy Spirit comes on you; and you will be my witnesses in Jerusalem, and in all Judea and Samaria, and to the ends of the earth.”  (Acts 1:4, 8)

Most Christians are more familiar with the Greek term representing the day of Shavuot—Pentecost, which means fiftieth (day). 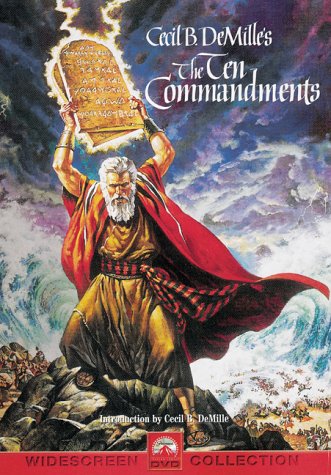 In the 1956 epic film, the Ten Commandments, Charlton Heston portrayed Moses, who leads the Children of Israel from Egypt to the Promised Land.  The film is considered one of the most financially successful movies of all time.  The American Film Institute lists it as the 10th best film in the epic genre.

Traditionally, Shavuot is regarded as the time when God gave the Torah to Israel at Mount Sinai.

This was seven weeks after Israel’s miraculous exodus from Egypt.

Do you remember the Charlton Heston movie where he plays Moses, stretching forth his rod and the sea parts?  Well, shortly after that scene Moses is up on Mount Sinai for 40 days and 40 nights.  He receives the Torah on Shavuot.

There at the foot of the mountain more than 3300 years ago, the Jewish people accepted the privilege and the responsibility of living as God’s “set-apart people.”

The Torah became the agreed upon standard of behavior and code of conduct for both the native-born Israelite and the stranger who lived amidst them.

“The same laws and regulations will apply both to you and to the foreigner residing among you.”  (Numbers 15:16)

Traditionally, if the Holy day of Pesach (Passover) is considered the birth of the nation of Israel, then the Holy Day of Shavuot is its Bar Mitzvah – the time when adolescents come of age and are considered adult enough to be responsible for their moral and religious duties, as expressed in the Torah. 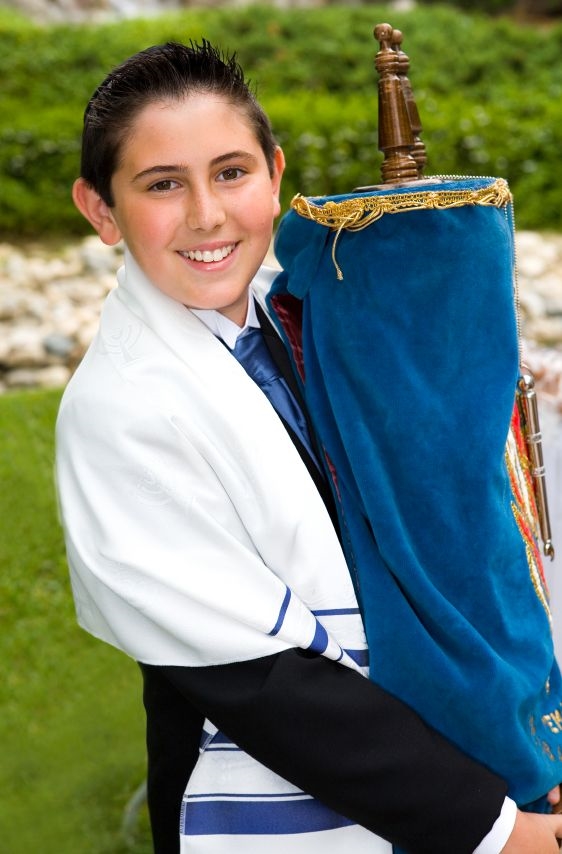 Jewish boys and girls embrace the responsibility of carrying the Torah for the first time on the day of their Bar and Bat Mitzvah, when they officially become sons and daughters of the Commandment.

Psalm 119 extols the beauty, blessing and liberty of living in accordance to God’s word in the Torah.

“Seven times a day I praise you for your righteous laws.  Great peace have those who love your Torah, and nothing can make them stumble.”  (Psalm 119:164–165)

The Bible promises that we will enjoy prosperity and success when we meditate upon Torah and follow its ways.

“Keep this book of the Torah [instruction, law] always on your lips; meditate on it day and night, so that you may be careful to do everything written in it.  Then you will be prosperous and successful.”  (Joshua 1:8) 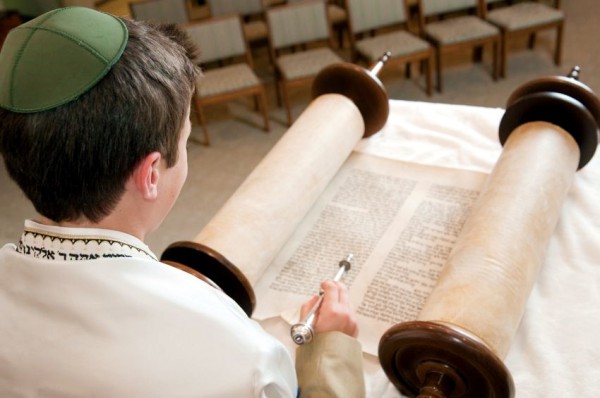 A Bar Mitzvah boy reading from the Torah scroll.

From Mount Sinai until now, there has always been a remnant of Jewish people who uphold the Torah, and every year on the holiday of Shavuot, the Jewish People renew their acceptance of this precious gift of God.

For that reason, it’s a centuries old custom to stay awake all night studying Torah on Erev Shavuot (which is this Saturday night) in anticipation of receiving the Torah the next morning.

This Sunday morning, therefore, Jewish men, women and children will be in the synagogue listening to the Ten Commandments, while Christians celebrate the outpouring of the Holy Spirit. 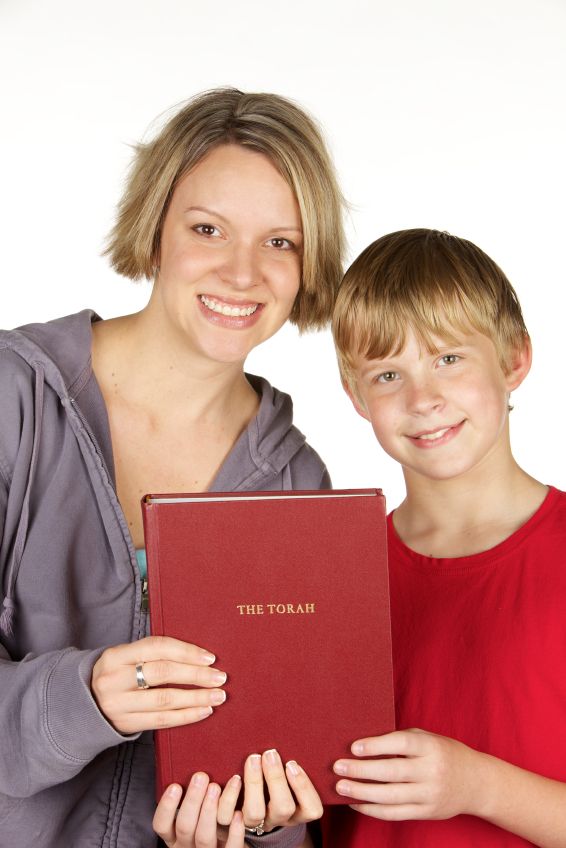 Shavuot: The Sealing of a Covenant

The Torah is much more than just a list of rules.

God did not simply give the Law (Instruction) at Mount Sinai; He sealed a covenant with His people, very much the same way a groom and bride seal a covenant when they say, “I do” (Jeremiah 31:32).

In fact, one meaning of the Hebrew word Shavuot is “oaths.”

Many aspects of the experience on Mount Sinai resembled a Jewish wedding ceremony; for example, consider the following:

• The cloud covering Mount Sinai shares a similarity to the Jewish wedding canopy called the chuppah (canopy), which covers the bride and groom during the wedding ceremony;

• The Ten Commandments resembles a ketubah, which is the marriage contract outlining privileges and responsibilities of each party;

• The Sabbath is very much a sign of betrothal, similar to a wedding ring; and

• The Land of Israel is like a wedding gift. 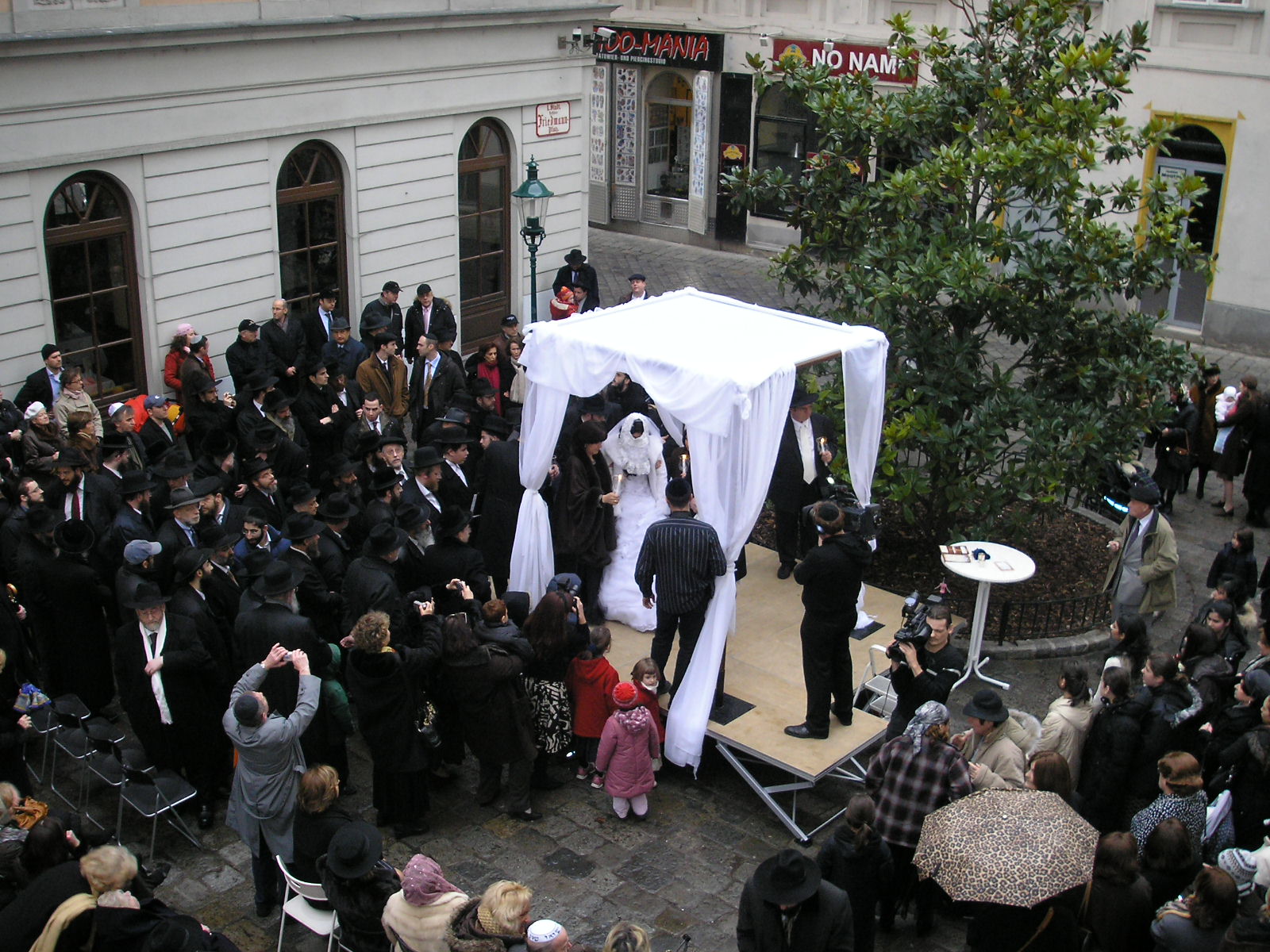 A Jewish couple marries under the chuppah: At Mount Sinai, the Lord brought Israel into covenant with Himself, under the canopy of the glory-cloud, which is traditionally likened to the marriage canopy called the chuppah.

Shavuot in the New Covenant

Rav Shaul (the Apostle Paul), who was “a Hebrew of Hebrews” and blameless when it came to Torah (Philippians 3:4–6), said that if we could be made righteous by the Torah, then Yeshua (Jesus) died in vain.

“I do not treat the grace of God as meaningless.  For if keeping the Torah could make us right with God, then there was no need for Messiah to die.”  (Galatians 2:21)

As Believers, we know that keeping the Torah is not how we are saved, but how we live because we are saved. 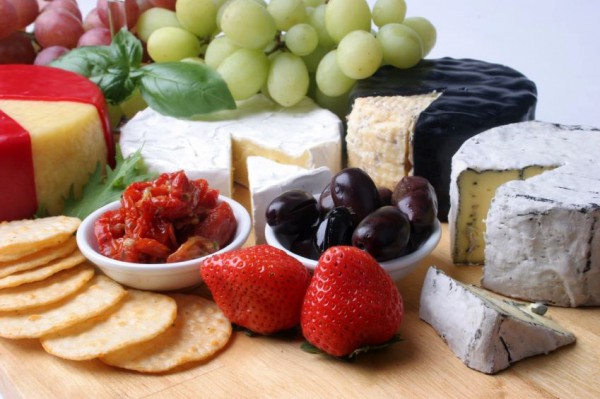 The tradition of eating cheese on Shavuot is thought by some to date all the way back to the day Moses presented Israel with the Torah.  After receiving the Torah, the Israelites would have realized that previously slaughtered meat was not kosher, and since they were hungry and butchering and cooking fresh meat would have taken too long, they opted for cheese.

As Jeremiah prophesied, the Torah is written in our mind and our heart by the Ruach HaKodesh (Holy Spirit) under the New Covenant:

‘This is the covenant I will make with the people of Israel after that time,’ declares the Lord.  ‘I will put my law in their minds and write it on their hearts.  I will be their God, and they will be my people.’  (Jeremiah 31:33)

God never intended that we merely know the Torah; He intended that it transform us into His people, changing us from the inside out, and showing us the path to loving God and man.

Love is the whole point of the Torah.  Knowledge alone results in pride and legalism.

We need the Spirit of God to lead us into all truth, give us the ability to keep God’s word, and truly love. 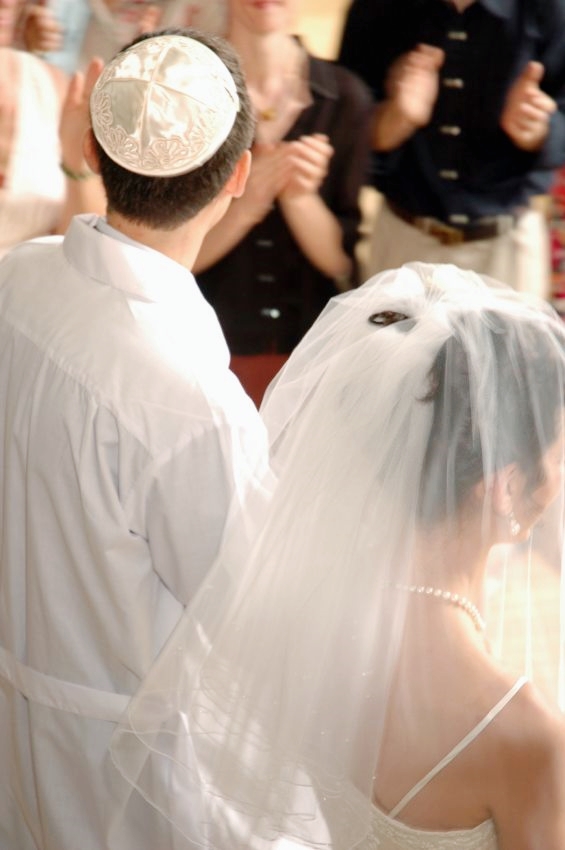 God’s Ruach HaKodesh (Holy Spirit) empowers us to truly love, stand in one spirit, and contend “as one new man for the faith of the Gospel” (Philippians 1:27).

Being Empowered by the Holy Spirit on Shavuot

Yeshua (Jesus) instructed His disciples to wait in Jerusalem for the Ruach HaKodesh (Holy Spirit), so that they could fulfill their destiny.

“When the day of Pentecost [Shavuot] came, they were all together in one place.  Suddenly a sound like the blowing of a violent wind came from heaven and filled the whole house where they were sitting. …  All of them were filled with the Holy Spirit and began to speak in other tongues as the Spirit enabled them.”  (Acts 2:1–4)

In a wonderful prophetic fulfillment of Shavuot, the Ruach HaKodesh (Holy Spirit) descended in power, changed them from the inside, and empowered them to “stand firm in one spirit” to reach Israel and the nations with the Gospel of Yeshua (Philippians 1:27).

“I will give them singleness of heart and action, so that they will always fear me for their own good and the good of their children after them.”  (Jeremiah 32:39)

“All the believers were one in heart and mind.  No one claimed that any of their possessions was their own, but they shared everything they had.”  (Acts 4:32)

Each of us have been given a holy calling to be a shining light in the midst of a dark and perverse generation.

This Shavuot, may our hearts be transformed as we receive a fresh infilling of Holy Spirit (Ruach HaKodesh) who empowers us to fulfill our destinies!

Parasha
Jew and Gentile: The Origins of Division

Feature
Yom Hashoah: The Holocaust-Moving from Grief to Action

Yom HaShoah, a national day of mourning for the genocide of the Jewish People in Europe and the resistance fighters who stood up to the Nazis.

Holiday
Giving Others More of God