Parasha Beshalach (When Let Go): From Victim to Victorious

“When Pharaoh let the people go, God did not lead them on the road through the Philistine country, though that was shorter.  For God said, “If they face war, they might change their minds and return to Egypt.”  (Exodus 13:17)

Last week’s Parasha ended with the final plague—the death of the first born.  When Pharaoh’s own son died, his resistance to releasing the Israelites was so shattered that he drove them out of Egypt. 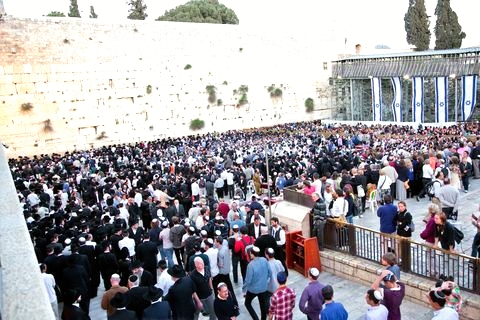 The Western (Wailing) Wall, the Jewish People’s most sacred site apart from the Temple Mount itself, has been a place of Jewish prayer for centuries.

“What have we done?  We have let the Israelites go and have lost their services!”  (Exodus 14:5)

The Exodus is the cornerstone of the nation of Israel: the commandments, the promises, the essence of Judaism, all began with this departure from Egypt.

The Exodus also broke the power of Egypt and devastated it, and Egypt never regained its status as the great nation it had been.

That devastation didn’t happen because of the plagues or because Pharaoh let the Israelites go.

The final blow came to Egypt when Pharaoh reconsidered letting God’s people go free and sent his army to chase after them with the intention of bringing them back into slavery. 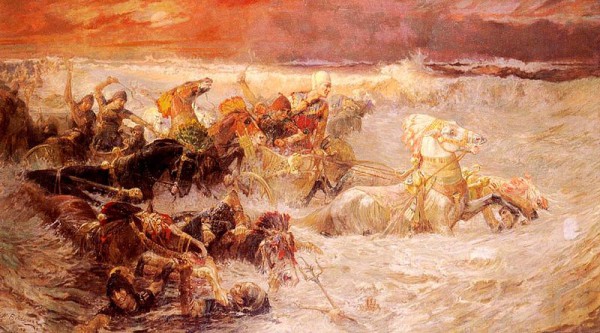 Despite all the mighty acts that God had performed to save the Israelites from Egypt, in the face of Pharaoh’s army, they became angry and afraid.

Although they had just finished praising God for delivering them from Egypt with a mighty hand and an outstretched arm, when they were faced with their first real challenge as a free people, they fell into doubt, fear, and unbelief.

While it seems that the Israelites didn’t really believe in God’s omnipotence, it’s more likely that they didn’t believe that He would use His power on their behalf.

They interpreted this new threat with a victim mentality and not with the mindset of a victorious people chosen and protected by God.  They thought they were going to die and blamed Moses.

“They said to Moses, ‘Was it because there were no graves in Egypt that you brought us to the desert to die?  What have you done to us by bringing us out of Egypt?”  (Exodus 14:11) 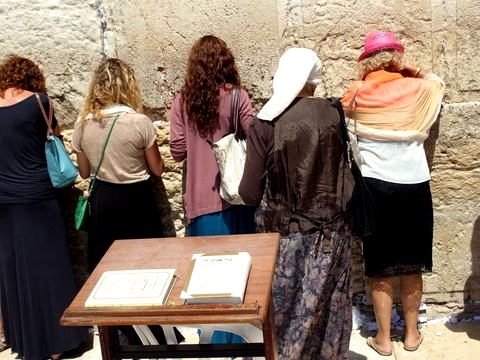 Women pray at the Western (Wailing) Wall in Jerusalem

From Victim to Victorious

Although the two million Israelites who left Egypt might have outnumbered Pharaoh’s army, after 400 years of servitude to the Egyptians, they hadn’t had enough time to make the mental adjustment from victim to victorious.

What could they do but pray?

When Moses called out to God, the Almighty answered:  “Why are you crying out to Me?  Tell the Israelites to move on.”  (Exodus 14:15) 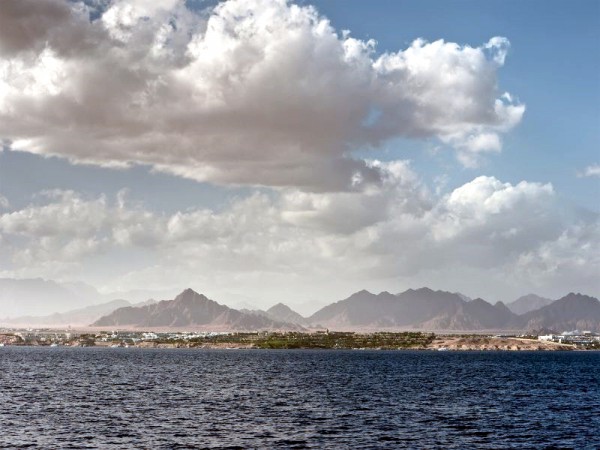 To stay out of bondage, the Israelites had to make the first move.

Moses represented God’s presence by raising his staff and stretching out his hand to part the sea.

The Israelites then had to step out between those terrifying walls of water.

There’s a time to cry out to the Lord, a time to intercede and pray, and a time to just move forward in faith—Kadima!  (Forward!)

The crossing of the Red Sea was a turning point in Israel’s relationship with God.  Up until this point, the miracles were entirely orchestrated by God.

At the Red Sea, the Israelites, for the first time, became directly involved in the miracle of their deliverance and their fate.

If they didn’t move, death and bondage was inevitable. 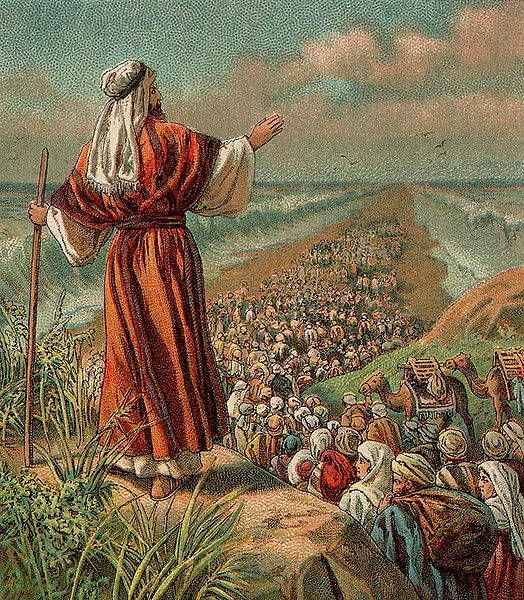 “They will have no fear of bad news; their hearts are steadfast, trusting in the Lord.”  (Psalm 112:7)

Often when we read the account of the Exodus, we distance ourselves from the unbelief of Israel, though we should be examining the fears and doubts in our own heart.

That is why every Jew is bound to retell the story of the Exodus at Passover as though God delivered each one of us, personally out of bondage.

Just like the Israelites in bondage in Egypt, when we spend years of our lives in servitude to the kingdom of darkness, we also learn to live in fear and expect the worst.

As the people of God, set free by Yeshua HaMashiach (Jesus the Messiah), we must become confident enough to step out in faith, trusting God to lead, guide, and direct our footsteps. 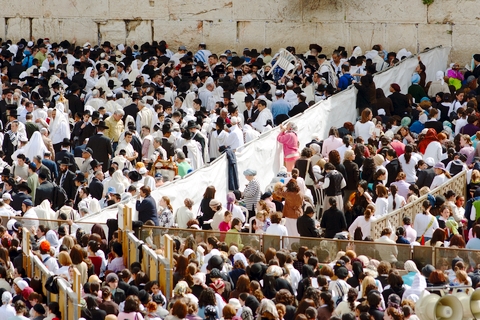 Crowds at the Western (Wailing) Wall in Jerusalem at Passover.

Just as the Exodus was the starting point of Israel’s salvation, so is our rescue from the kingdom of darkness just the beginning of our spiritual journey.

But the enemy of our souls does not let go easily; he usually tries to draw us back into bondage.

Instead of panicking and getting angry at others, we can move on in faith, believing that He will save us.  After that, we need to enter into His rest and wait on the Lord for further instructions.

If we remember that the Lord fights our battles for us; then we can quiet our inner turmoil and trust in Him, hold our peace and refuse to speak unbelief when pushed to our limits. 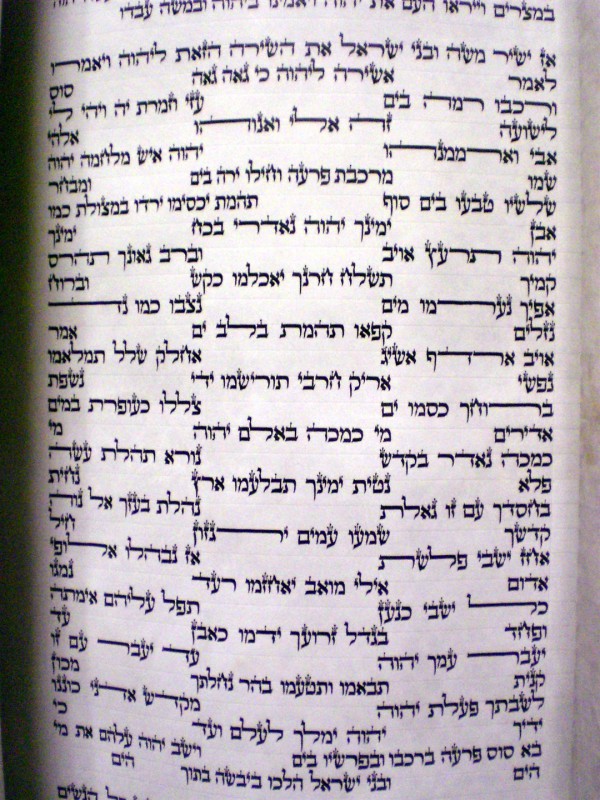 The Song of the Sea also known as Az Yashir Moshe (The Song of Moses), a poem in Exodus 15.

“Then Moses and the Israelites sang this song to the Lord:  “I will sing to the Lord, for He is highly exalted.  Both horse and driver he has hurled into the sea.”  (Exodus 15:1)

This Shabbat has a special name—“Shabbat Shirah” (Sabbath of Singing)—because the Song of the Sea will be recited in the synagogue.

The Israelites sang this song with great joy after they passed safely through the Red Sea, but witnessed the Pharaoh’s armies destroyed in the Sea.

While the Song of the Sea forms the high point of the reading, the Song of Deborah is also read in the Haftarah portion (prophetic) of the reading (Judges 4:4–5:31).  That song was sung by Deborah, the only female judge mentioned in the Bible, after Sisera, the commander of the Canaanite army, was killed by Yael. 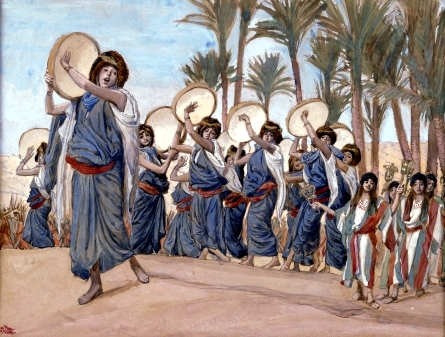 The Songs of Joy, by James Tissot:  The female encore to the Song of the Sea is Shir Miryam (Song of Miriam), since she and the maiden went out with tambourines, singing and dancing with great joy.

Singing praise to the Lord is one of the highest forms of spiritual warfare.

The Book of Revelation establishes a clear link between praise, warfare, and Shir Moshe (Song of Moses):

Those defeating the beast, its image and the number of its name were standing by the sea of glass, holding harps which God had given them.  They were singing the Song of Moshe, the servant of God, and the song of the Lamb:  Great and wonderful are the things you have done, Adonai, God of heaven’s armies!  (Revelation 15:2–3)

When we experience adversity and yet believe that God can and will bring us through to victory, we are transformed into overcomers who will inherit the Kingdom of Heaven here on earth. 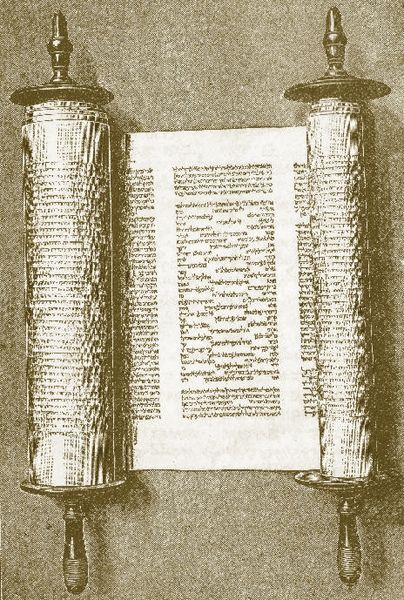 An engraving of the Torah Scroll open to the Song of Moses (Exodus 15).  Notice that the layout of this passage resembles bricks in a wall.  The alternating words represent the two walls of the split sea with Israel walking down the middle.

Passing Through to the Other Side

“And the Egyptians said, ‘Let’s get away from the Israelites!  The Lord is fighting for them against Egypt.’”  (Exodus 14:25)

After the Israelites passed through the Red Sea safely, God hindered the Egyptian army by removing their chariot wheels.

As the water returned to its natural state, Pharaoh and the Egyptians realized they were fighting with the one true God, but it was too late.

The Egyptian army drowned in the sea, just as the Egyptians by Pharaoh’s command had drowned the Hebrew baby boys in the Nile River.

We see here God’s standard put into practice: whatever the nations do to Israel, God will return in equal measure for good or for evil.  He will bless those who bless Israel and curse those who curse Israel.  (Genesis 12:3)

The nations who today are coming against Israel are fighting against the Lord, and one day, they will also realize this. 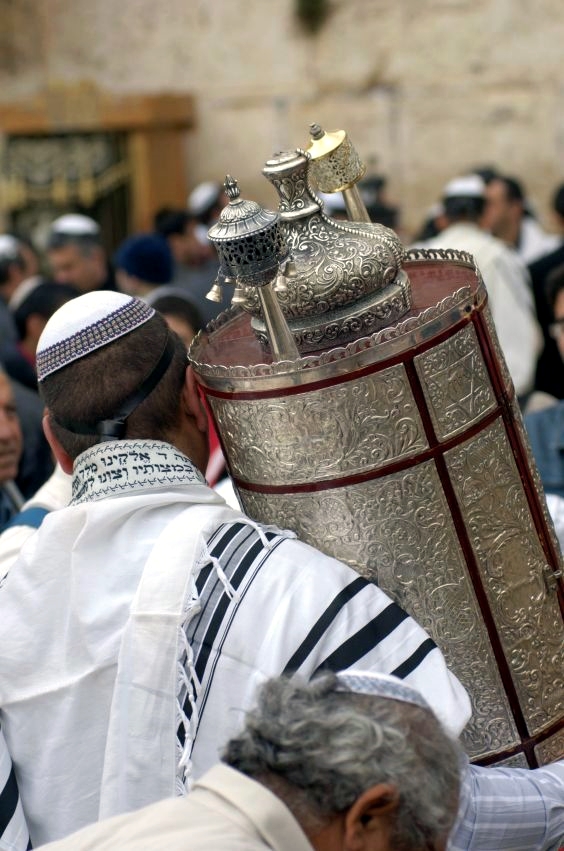 A Jewish man carries the Torah scroll, which is protected by an ornate silver case, at the Western (Wailing) Wall in Jerusalem.

The Coming Judgment of the Nations

Scripture describes a last-days scenario for Israel that seems similar to the Red Sea experience.  But instead of one nation coming against God’s people, all nations will try to overpower them.

I will judge him with plague and with blood, I will cause torrential rain to fall on him, his troops and the many peoples with him, along with huge hailstones, fire and sulfur.  I will show my greatness and holiness, making myself known in the sight of many nations; then they will know that I am Adonai.  (Ezekiel 38:22–23)

When the nations come against Israel, it will look like a hopeless situation, just as it seemed when the Israelites were trapped between the Egyptian army, the mountains, and the Red Sea.

Just like back then, the Lord will supernaturally intervene to save Israel.

For I will gather all the nations against Yerushalayim [Jerusalem] for war…  Then Adonai will go out and fight against those nations, fighting as on a day of battle.  On that day His feet will stand on the Mount of Olives….

On this glorious day, the Jewish people in the nations, and especially here in Israel, will know that God has saved them, and they will believe in Him, and in His servant, the Branch, the shoot out of Jesse, Yeshua King Messiah.