“But he shall acknowledge the firstborn . . .  by giving him a double portion of all that he has, for he is the beginning of his strength;  to him belongs the right of the firstborn”  (Deuteronomy 21:17).

The Law of Moses used the term to describe the double portion allocated to an Israelite’s firstborn son.  The firstborn’s birthright would include a double portion of the inheritance given to his other siblings as well as the responsibilities of leading the household once the father had passed. 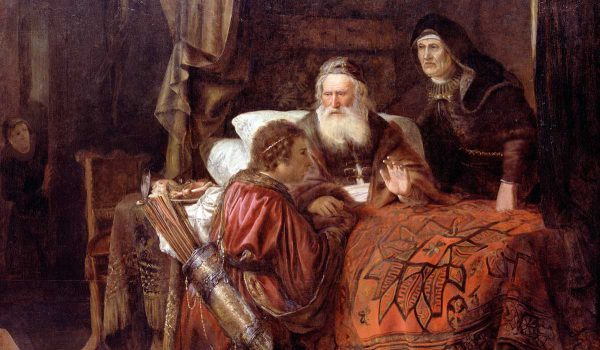 The patriarch Isaac had planned to give his firstborn son Esau both the responsibilities of the birthright and a double blessing.

Jacob, the second born, recognized the value of this position and wanted it!

One day, he took advantage of his older brother Esau’s hunger and made a deal to give him food in exchange for his birthright: 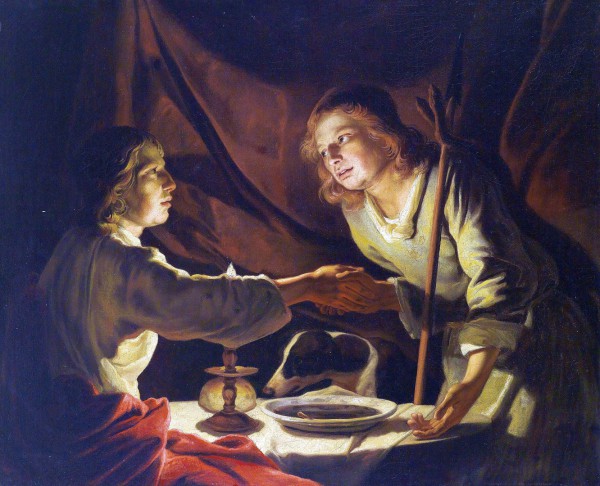 After obtaining from Esau his birthright as the firstborn, Jacob tricked his father Isaac by dressing up as Esau and saying,  “I am Esau your firstborn.  I have done as you told me.  Please sit up and eat some of my game, so that you may give me your blessing.”  (Genesis 27:19).

Isaac who was old and could not see well thought Jacob was Esau and gave him the double portion blessing.

Though Jacob’s name in Hebrew Ya’akov means supplanter or deceiver, God declared even in his mother’s womb that Jacob would be the blessed one, saying to Rebekah:   “Two peoples from within you will be separated;  one people will be stronger than the other, and the older will serve the younger”  (Genesis 25:23).

Moreover, even after Isaac realized he blessed Jacob instead of Esau, Isaac continued to bless Jacob, saying:

“May God Almighty bless you and make you fruitful and multiply you, so that you may become a company of peoples.  And may He give the blessing of Abraham to you and your descendants, so that you may possess the land where you dwell as a foreigner, the land God gave to Abraham.”   (Genesis 28:3–4)

God wanted His covenantal promises to Abraham to pass through Jacob and his descendants.  After Jacob wrestled with God, he received the name Israel (which means to struggle with God).  And from Jacob, came the 12 tribes of Israel.

From this, we know that God’s plans will always be accomplished, even when we don’t understand, or like how they unfold. 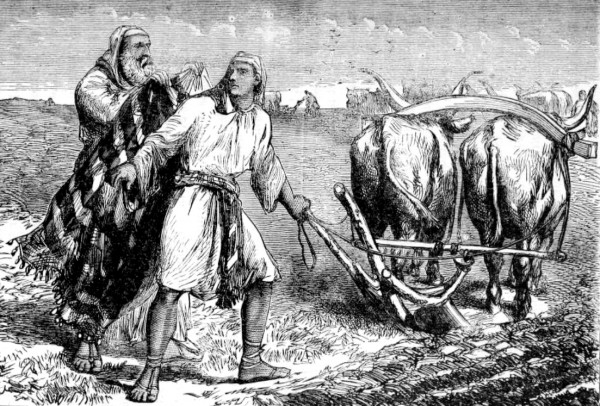 Double Portions Can Come with Persistence, Faithfulness, and Love

Double portion blessings do not only accompany the birthright of the firstborn.  They can simply be given by God or others out of love, but also after much testing.

Elisha remained loyal through times of apprenticeship and rejection.

At the end of the prophet Elijah’s ministry, his prophet in training Elisha asked Elijah if he could receive a double portion of his spirit so that he could likewise carry out a powerful ministry:

“When they had crossed over, Elijah said to Elisha,  ‘Ask what I shall do for you before I am taken from you.’  And Elisha said,  ‘Please, let a double portion of your spirit be upon me’”  (2 Kings 2:9). 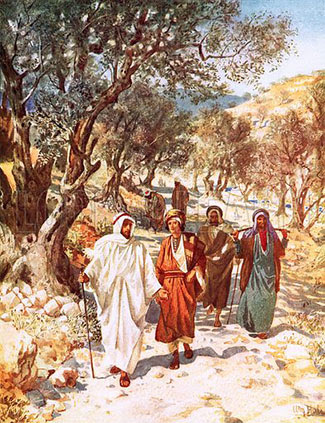 Jesus and His Disciples on the Way to Galilee, by William Hole

Scripture records that Elisha was indeed “doubly blessed,” as he carried out twice as many miracles as Elijah had.

But his blessing came after a certain amount of trials, including rejection by his own mentor.  Three times, Elijah asked Elisha not to follow him and three times Elisha responded by saying, “As surely as YHVH lives and as you live, I will not leave you”  (2 Kings 2:2–6).

Elisha stayed close to Elijah, helping him and learning from him.  When the time came for Elijah to ascend to heaven, he granted Elisha’s request for a double portion of his spirit.

Yeshua promised, “I will never leave you or forsake you,” and He desires that we will do the same for Him.  He says to each of us: 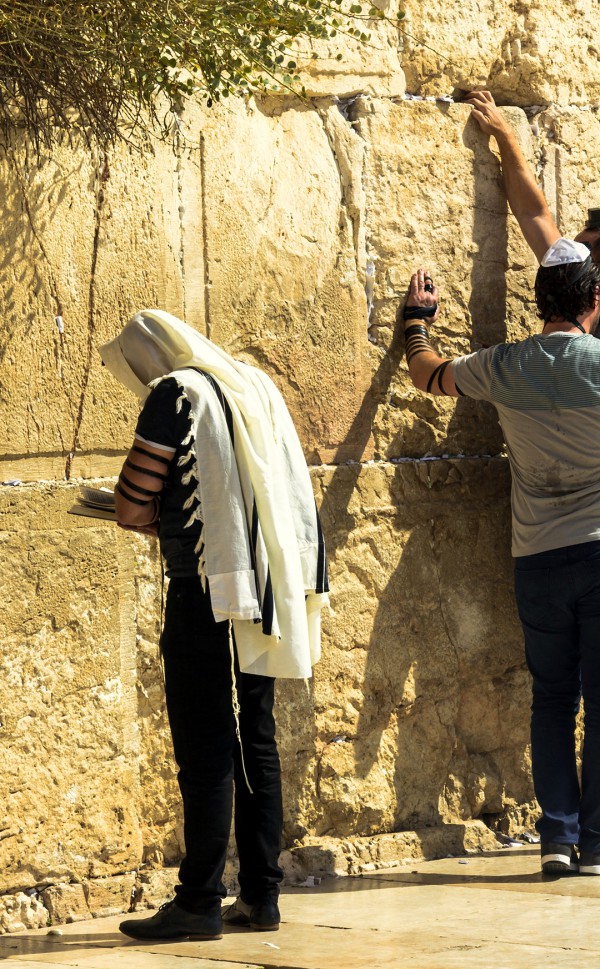 “Remain in me, as I also remain in you.  No branch can bear fruit by itself; it must remain in the vine.  Neither can you bear fruit unless you remain in me.”  (John 15:4)

After the Lord had allowed Job to be tested by taking away his children, livestock, and health, the Lord restored to Job twice as much as he originally had before his trial.  Job’s faithfulness to the Lord and his prayers for his not-so-loyal friends, resulted in a double portion:

Who can we pray for today?

Hannah persisted through her despair of being childless.

A double portion of any thing on any day can be given to any person as a sign of love.  We see this when Elkanah loved his wife Hannah despite her inability to bear children, and he showed her his love by giving her a “double portion.”

“When the day came that Elkanah sacrificed, he would give portions to Peninnah his wife and to all her sons and her daughters;  but to Hannah he would give a double portion, for he loved Hannah, but the Lord had closed her womb”  (1 Samuel 1:4–5).

We, too, can show our love for others by giving generously of our time, talents, and resources.  We do this while understanding that the blessings we bestow on earth is only a token of the goodness that God has already bestowed on us through Messiah Yeshua, who happens to be the eternal firstborn of all creation. 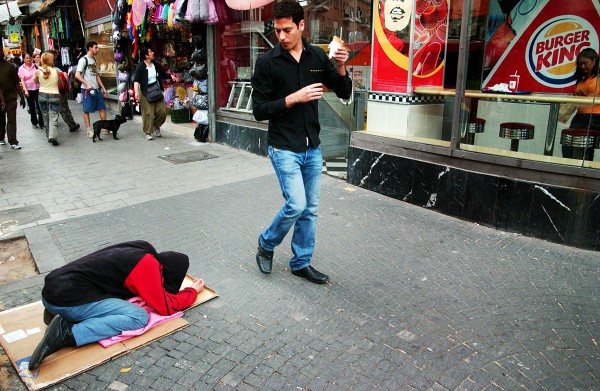 Rabbi Sha’ul (the Jewish apostle whose name was changed to Paul) referred to Yeshua as the “firstborn of all creation”:

“He is the image of the invisible God, the firstborn of all creation.  For by Him all things were created, both in the heavens and on earth, visible and invisible, whether thrones or dominions or rulers or authorities—all things have been created through Him and for Him.  “He is before all things, and in Him all things hold together.  He is also head of the body, the church; and He is the beginning, the firstborn from the dead, so that He Himself will come to have first place in everything”  (Colossians 1:15–18).

As the firstborn of all creation, and the creator of all things, Yeshua has justly inherited more than just a “double portion”;  He has become heir over all things, and through God’s goodness, He shares His inheritance with His followers. 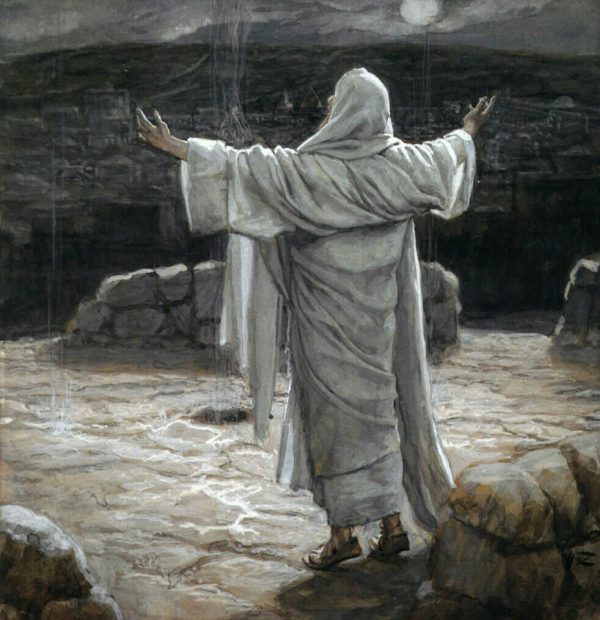 Scripture calls Believers the “church of the firstborn who are enrolled in heaven” (Hebrews 12:23) and “firstfruits to God and to the Lamb” (Revelation 14:4).  God has reserved this glorious inheritance in heaven for us.

“Blessed be the God and Father of our Lord Yeshua Messiah, who according to His great mercy has caused us to be born again to a living hope through the resurrection of Yeshua Messiah from the dead, to obtain an inheritance which is imperishable and undefiled and will not fade away, reserved in heaven for you,”  (1 Peter 1:3–4).

Because Messiah has risen from the dead and is the firstborn over all creation, believers in Him will live eternally and share in His glorious inheritance in heaven and in the New Jerusalem on the New Earth (Revelation 21:1–4).  This inheritance will be pure, eternal, and free from the sorrow and tears of this life.

That is God’s faithful promise to every Believer.  Moreover, God is also faithful to keep the promises He made to His firstborn son, Israel. 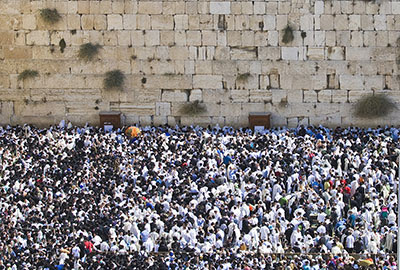 Crowds gather at the Western (Wailing) Wall to worship.

Israel Is Promised a Double Portion of Joy

God calls Israel His firstborn son in Exodus 4:22.  Because of this privileged position, He promised them that one day “instead of your shame you will have a double portion, and instead of humiliation they will shout for joy over their portion.  Therefore, they will possess a double portion in their land, everlasting joy will be theirs”  (Isaiah 61:7).

God gave the Land of Israel to Abraham and his descendants through Isaac and Jacob as an eternal possession (Genesis 17:7–8).

The modern state of Israel is a partial fulfillment of Isaiah’s prophecy that the Lord would regather the Jewish people a second time to their land from the four corners of the earth (Isaiah 11:11–12).

In the future, Messiah Yeshua will return to defend Israel against her enemies, and the nation of Israel will recognize Him as her Messiah (Zechariah 12:9–10).

Then “all Israel will be saved” (Romans 11:26) receiving perhaps even more than a double portion of everlasting joy in the Land God promised her, with Yeshua reigning as King on David’s throne. 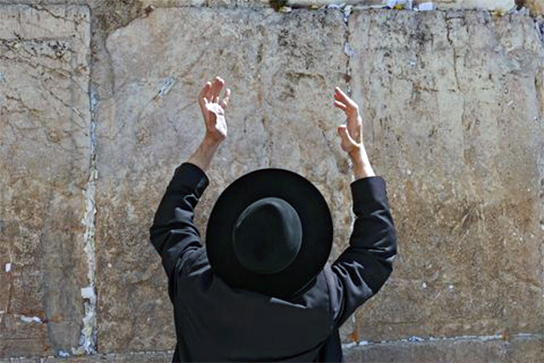 May you also receive a great inheritance in the Lord, and even more than a double portion.