An amazing discovery in Jerusalem again proves that the Word of God is Active, Living, and the words of the Bible are absolutely true.

A high-ranking government seal was discovered in a four-room structure in Jerusalem on a hillside facing the Western Wall, just 100 meters from the Temple Mount.

The early Hebrew writing on the seal says, “[Belonging] to the governor [sar] of the city” and is dated to the 7th century BC, a time when the First Temple stood. 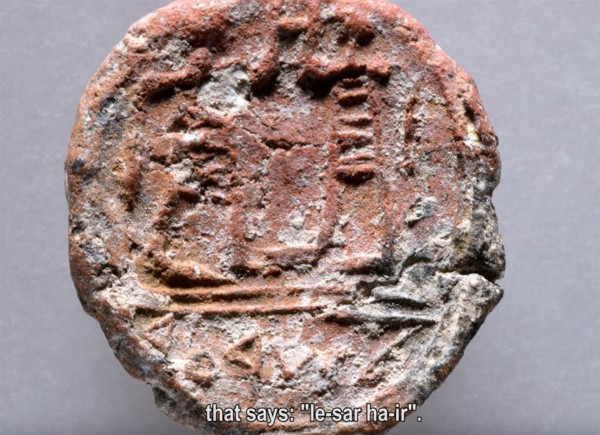 The stamped and pre-fired clay seal bears the image of two figures facing each other. At the bottom, in ancient Hebrew script it says, “le-sar ha-ir,” meaning “[Belonging] to the Governor of the City.” It measures 13×15 mm and is 2–3 mm thick. (IAA YouTube capture)

The seal helps us understand the type of people who lived near the Temple.

“The finding of the impression with this high-rank title, in addition to the large assemblage of actual seals found in the building in the past, supports the assumption that this area, located on the western slopes of the western hill of ancient Jerusalem, some 100 meters west of the Temple Mount, was inhabited by highly ranked officials during the First Temple period,” said Dr. Shlomit Weksler-Bdolah, the site excavation director.

The building “probably served as an administration center.  The people who gave orders may have had to sign documents here. It may also have been a place for the rich, the more important people, because the location is really important,” she added. 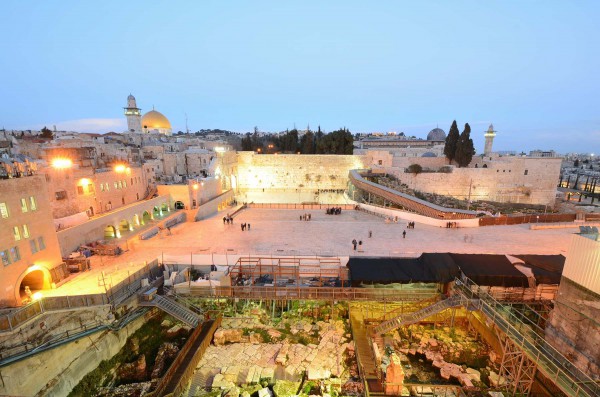 View of the excavation where the governor’s seal was found, only 100 meters across from the Western Wall and Temple Mount.

The restoration of the Jewish People to their land has resulted in 20,000 recognized archaeological dig sites throughout Israel.

The Israel Antiquities Authority (IAA) is in charge of the country’s archaeological sites, their excavations, and the Biblical Homeland’s antiquity treasures.  About three hundred of those sites are actively being excavated today.

In these digs, archaeologists are documenting and confirming that people, places, and events described in the Bible are true! 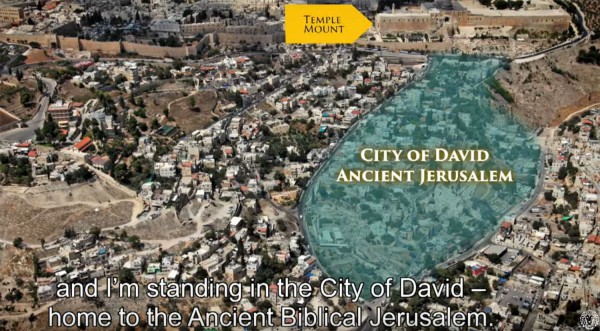 The City of David was first identified and excavated in 1867. Though a core part of Israel’s ancient past, it currently sits in “East Jerusalem,” an area which the Palestinian Authority is claiming as its own capital of the State of Palestine. (The Jerusalem Watch YouTube capture)

The Importance of Archaeology

Archae-ology, then, is the science or study of ancient things.

Because science relies on what can be observed, artifacts allow archaeologists to observe the past.

Yet, some archaeologists prefer to call themselves historians, such as world-renown archaeologist William G. Dever, Professor Emeritus of Near Eastern Archaeology and Anthropology at the University of Arizona.

Dever explains in his book, Beyond the Texts, An Archaeological Portrait of Ancient Israel and Judah, artifacts are key to mapping life in ancient societies.

They are eye-witnesses to the culture, people, and places that they represent.

That makes them “primary sources” in the quest for historical evidence.  This means that new knowledge about the early history of Israel, which also confirms the stories in the Bible, is constantly being expanded. 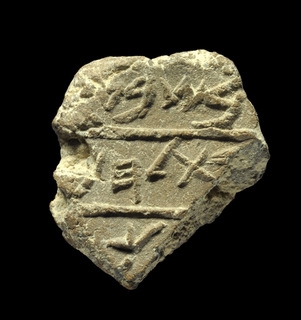 Discovered in City of David excavations in 2012, this ancient seal is “the first time the name Bethlehem appears outside the Bible in an inscription from the First Temple period [1006 BC–586 BC],” the IAA site excavator said. (IAA Photo)

These new discoveries are material evidence that “represents the values and meanings within a society,” writes archaeologist David Kingery.

Of course, some interpretation and speculation are required to obtain such meaning.  And therein lies the problem with any science — one must critically examine the evidence as well as the assumptions of the scientist and their interpretations.

Some archaeologists, for instance, believe the long-accepted dating of the Exodus from Egypt is incorrect, which is why no significant evidence of it has been uncovered.

But if the Exodus actually happened 230 years earlier, in 1500 BC (based on 1 Kings 6:1 and other references), then a variety of evidence exists for it and for the life of the Patriarchs (Abraham, Isaac, Jacob, and Joseph).

For example, the recreated statue of a Semitic man with a mushroom haircut and a multicolored coat (below) was found in an Egyptian pyramid-shaped tomb in the ancient land of Goshen.

It is dated to 1700 BC, when Joseph would have reigned in Egypt (based on the revised date of the Exodus).  So, it is believed by some archaeologists to be a statue in honor of Joseph himself. 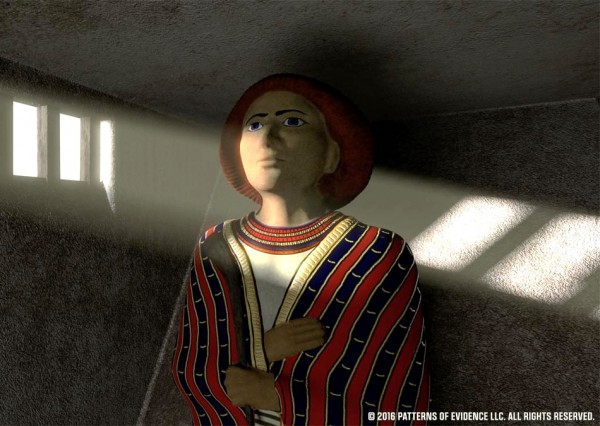 Yet, some interpretations of artifacts cannot be refuted.

Critics used to say that writing didn’t exist in Moses’ time.  They claimed that the Torah (first five books of the Bible) were not written until the time of Ezra in the 5th century BC.

However, in 1974, about 17,000 cuneiform tablets and fragments with writing were found at Ebla in northern Syria that date prior to the 24th century BC, before the Great Flood.  So Moses definitely could have written the Torah.

Critics used to say that the Babylonian siege against Jerusalem in the late 6th century BC (2 Kings 24–25) didn’t happen.

But pottery shards with ancient Hebrew script were uncovered between 1935–1938 in the city of Lachish (30 miles southwest of Jerusalem) that describe the siege.  Moreover, over 100 cuneiform tablets that describe Jewish life in Babylonian captivity as well as the proclamation by King Cyrus to allow the Jewish captives to return home have been discovered in Iraq. 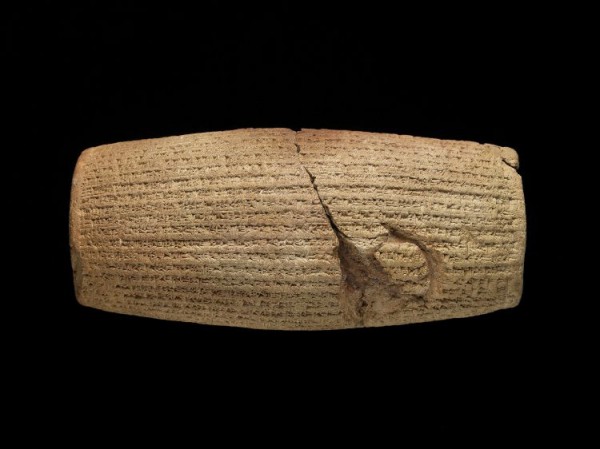 The Cyrus cylinder, discovered in 1879 in modern Iraq, confirms that King Cyrus allowed captives in Babylon to return to their native lands in 539 BC. It sits in the British Museum of London, where many Biblical discoveries are displayed.

Critics use to say that King David was just a mythical figure.  However, fragments of a stele found at Tel Dan in 1993–1994 excavations proves that David was a 10th century king, well known to his neighbors.

Critics used to say that certain places mentioned in the Brit Chadasha (New Testament) were fictional until 2006 when archaeologists found the Pool of Siloam where Yeshua healed the blind man (John 9:1-11).

And in 2005, the Pool of Bethesda where Yeshua healed the paralytic (John 5:2–9), was officially identified, a century after its initial excavation. 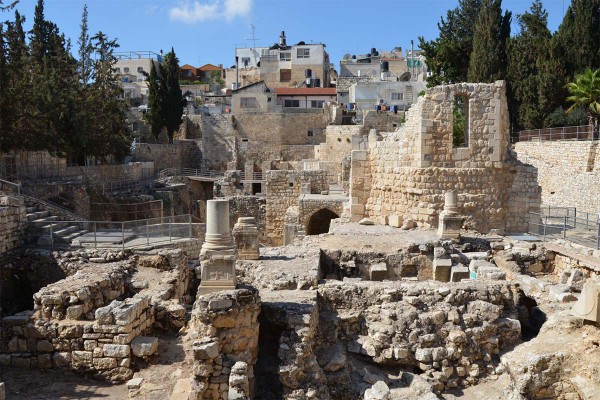 John 5:2 says the Pool of Bethesda had five covered porticos, likely where the disabled waited for healing. Once excavated in the late 19th century, the pool was found to be a mikvah, a ritual bath, used by Jewish People on their way to the Temple nearby. A wall separated two basins, creating a five-sided pool.

Since the late 19th century, a gold rush of archeological historians have uncovered treasure troves of Biblical evidence in The Land, and more awaits.

The Biblical Archaeology Society website lists excavations such as Mount Zion, just outside the Old City walls in the City of David; Tel Dan at the base of Mount Hermon in the north; and Tel Shiloh, where the Tabernacle was erected before the First Temple was built in Jerusalem.

“Then the whole congregation of the people of Israel assembled at Shiloh and set up the tent of meeting there.”  (Joshua 18:1) 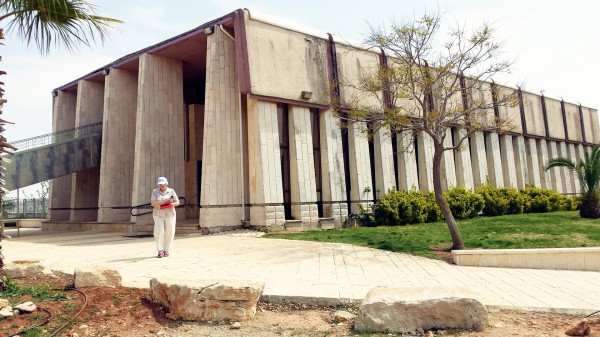 The Mishkan Shiloh Synagogue in the community of Shiloh is a replica of the Biblical Tabernacle.

In most high schools, students take a history class using a text book that records history of the people, boundaries of land, governments, wars, and famous people in your country.

Here in Israel, high school students also take a history class.  However, there is no academic textbook that they use. Israeli teachers only have one book that records the history of the Jewish people; and you guessed it … The Bible!

Even though everyone has access to the original Hebrew Bible here in Israel, the problem is that we are told from birth not to believe in Yeshua (Jesus), because God does not have a son.

Just as archaeology proves that people, places, and events in the Bible are recorded correctly, our Messianic Prophecy Bible is going to prove through all of the prophecies that Yeshua (Jesus) is the promised Messiah of Israel.

Feature
How to Grab Hold of the Yoke of Heaven

Feature
The Waters of the Mikvah (Immersion)

Discover the Messianic significance of the Mikvah and Baptism, since the days of Moses.

Feature
The Transforming Power of the One New Man

For a true outpouring of God’s Ruach HaKodosh (Holy Spirit), Jewish & Gentile Believers must come together as One New Man