Blood Moon Rises on the First Night of Sukkot 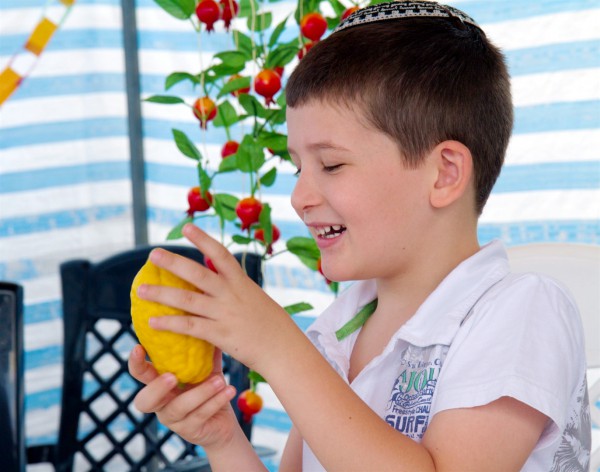 A Jewish boy in a Sukkah (booth) examines an etrog, one of the Arba Minim (Four Kinds) that are used in a waving ceremony that in ancient times was performed on all seven days of Sukkot at the Holy Temple.  (Go Israel photo by Dana Friedlander)

“On the fifteenth day of the seventh month the Lord’s Feast of Tabernacles begins, and it lasts for seven days.  The first day is a sacred assembly; do no regular work.  For seven days present offerings made to the Lord by fire, and on the eighth day hold a sacred assembly and present an offering made to the Lord by fire.  It is the closing assembly; do no regular work.”  (Leviticus 23:34–36)

The weeklong Festival of Sukkot (Feast of Booths or Tabernacles) has finally arrived and begins tonight as the sun sets and the Blood Moon rises.

This holiday is so joyous that it is also called Z’man Simchateinu, the Season of Our Rejoicing!

Tonight, here in Israel and around the world, the Jewish People will be spending time in the sukkot (plural of sukkah) that they built when Yom Kippur ended just days ago.

While one of the main observances of this holiday is spending time in the sukkah, another key observance is the waving of the lulav (a bundle of date palm fond, myrtle, and willow) and an etrog (a deliciously fragrant lemon-like citrus) before the Lord.

“On the first day you are to take choice fruit from the trees, and palm fronds, leafy branches and poplars, and rejoice before the Lord your God for seven days.” (Leviticus 23:40; see also Nehemiah 8:15) 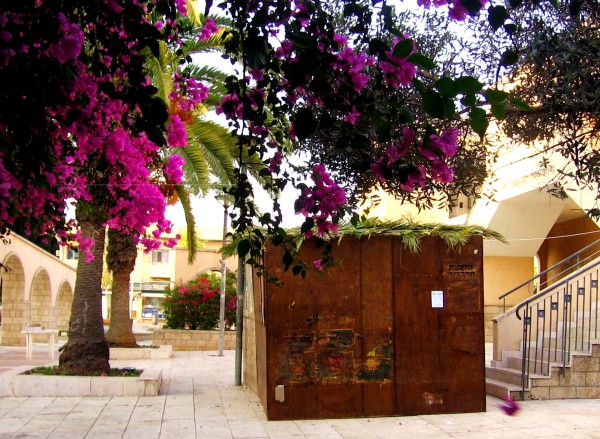 A wooden sukkah in a Jerusalem courtyard (Photo by Ron Almog)

This first night of Sukkot will be extra special, since the fourth and final lunar eclipse of the Blood Moon Tetrad (set of four consecutive eclipses) will light up tonight’s sky with a fabulous red glow.

This current tetrad has coincided with the Jewish feasts of Passover and Sukkot in 2014 and 2015 as it has eight other times since AD 162.

This final blood moon of the this current tetrad, however, is a supermoon, which makes it a rare celestial spectacle.

Because the moon will be at its closest approach to the earth, it will look 30% brighter and 14% larger than when it is at its farthest.  A wonderful treat for those who are spending the night in the Sukkah!

Rabbinic scholars point out that past tetrads coinciding with these Jewish holy days have come near turning points in Jewish history.  For instance, one occurred in 1949–1950 after the formation of the state of Israel in 1948.  The last Blood Moon Tetrad coincided with the Six Day War when Jerusalem returned to Jewish hands in 1967. 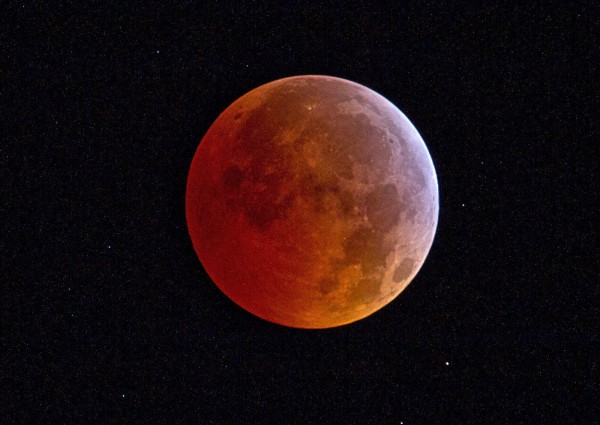 Many people, therefore, are greatly anticipating this Sukkot’s Blood Moon exactly because some of these moons have appeared so closely to events of such significance for the Jewish People.

The recent nuclear agreement with Iran by world powers, which seems to help move forward Iran’s ambitions to destroy Israel and could precipitate a major world war with Israel, underscores that significance.

Moreover, some have predicted this lunar eclipse will signal a major earthquake or devastating apocalypse before the return of Yeshua HaMashiach (Jesus the Messiah).

The prophecy in the Book of Joel is partially the reason for such predictions.

That prophecy states that the coming of the Messiah will be preceded by celestial wonders: the darkening of the sun—a solar eclipse (such as happened earlier this year)—and a Blood Moon, which is more commonly called a lunar eclipse:

“The sun will become dark, and the moon will turn blood red before that great and terrible day of the LORD arrives.”  (Joel 2:31) 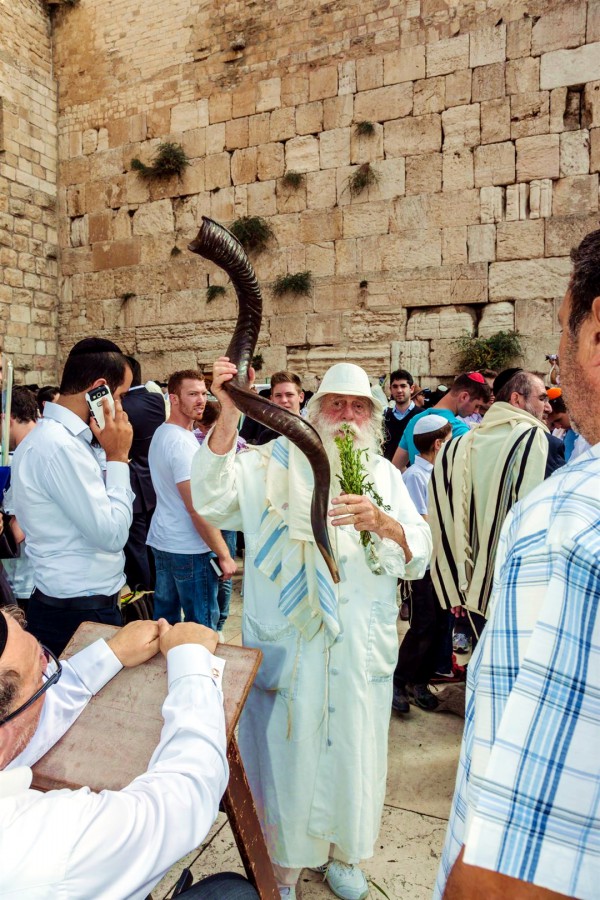 A Jewish man wearing a white robe symbolic of our sins being made as white as snow (Isaiah 1:18) holds a shofar and lulav on Sukkot in Jerusalem at the Western (Wailing) Wall.

However, let us also keep in mind that in addition to the sun darkening and the moon turning red, God says that He will “show wonders in the heavens and on the earth, blood and fire and billows of smoke.”  (v. 30)

So, to be true to Scripture, we must look for all of these wonders and other events identified throughout Scripture to occur before that terrible day of the LORD.

In addition to all of these wonders in the heavens, Scripture also promises that before the Messiah returns to set up His Messianic Kingdom, Adonai will draw the Jewish People by His Ruach HaKodesh (Holy Spirit), and they will recognize Yeshua:

“And I will pour out on the house of David and the inhabitants of Jerusalem a spirit of grace and supplication.  They will look on Me, the one they have pierced, and they will mourn for Him as one mourns for an only child, and grieve bitterly for Him as one grieves for a firstborn son.”  (Zechariah 12:10)

How wonderful it would be if this mass recognition of Yeshua, a kind of end-time harvest, begins today and becomes the significant turning point that this Blood Moon signals for the Jewish People.  That is certainly in keeping with a season of our rejoicing!

Indeed, Sukkot, which follows right after Rosh HaShanah (Day of Judgment) and Yom Kippur (the day the judgment is sealed), represents renewed fellowship with God.

And since this holiday is a pilgrimage festival linked to the harvest, it is also known as Chag haAsif (Festival of Ingathering). 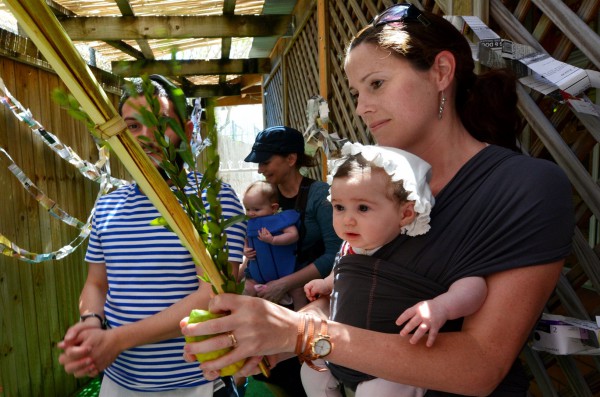 A Jewish woman shakes the lulav inside a sukkah.

We all look forward to the future fulfillment of this Day of Ingathering when the Jewish People are gathered and Messiah will reign on the earth (Isaiah 27:12–13; Jeremiah 23:7–8).

It will be a momentous time for all people.

The Bible tells us that the nations will come before the Lord during the Feast of Sukkot to worship Him here in Jerusalem.

And we know that time will come only after one more significant event—a major war between these nations and Israel:

“Then the survivors from all the nations that have attacked Jerusalem will go up year after year to worship the King, the Lord Almighty, and to celebrate the Feast of Tabernacles.”  (Zechariah 14:16)