Purim: A Time to Not Keep Silent 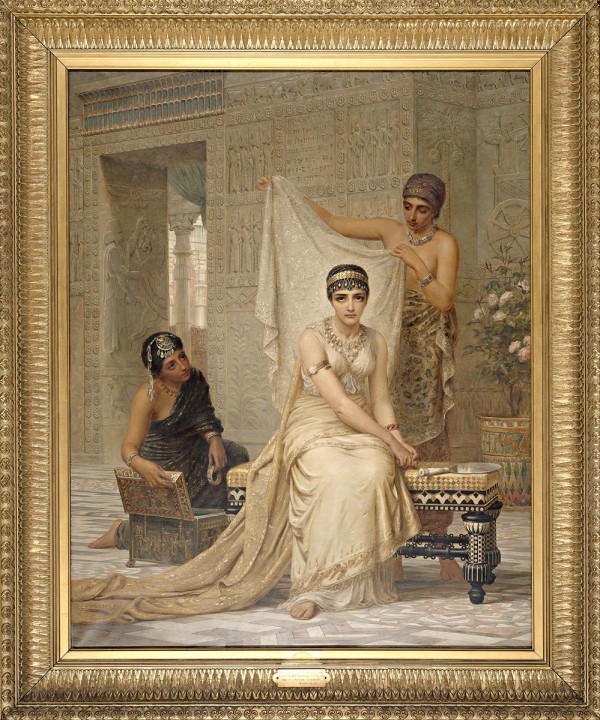 One of the most joyous of all Jewish celebrations, Purim (Festival of Lots), begins at sundown tonight.

This fun and inspirational holiday celebrates the exemplary leadership and bravery of Hadassah, a Jewish girl who rose to become ancient Persia’s Queen Esther.

As the queen, Esther risked death to uncover and overturn a plot to murder the Jewish People in Persia. 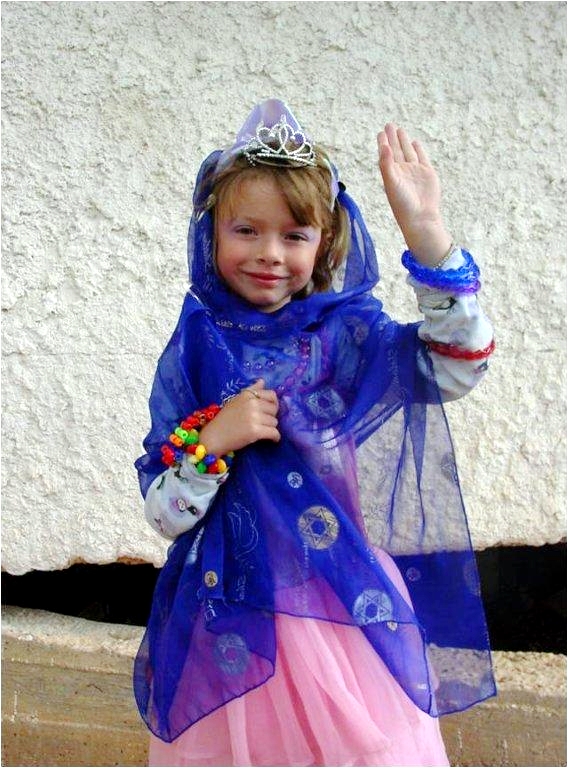 An Israeli girl dresses as Queen Esther for a Purim party.

In struggling with the decision to seek the king’s mercy, she modeled courage, wisdom, and perseverance, while rallying her people to fast and pray for their lives.

The story of Esther can be our story.  We may or may not reach the status of a queen, but we are all placed in positions of influence where we can access God’s wisdom to overturn schemes and expose evil plots against God’s people and plans.

Let’s now take a closer look at how Esther did just that and what followers of Yeshua haMashiach (Jesus the Messiah) can learn from her.

Purim: Evil Plans and the Courage to Expose Them

The story of Purim is recorded in the Book of Esther (Megillat Esther).  This wonderful book has three main characters:  Esther and her cousin Mordecai, the heroes of the story, and Haman, the villain who wickedly plots to destroy the Jewish People.

Esther is an orphan who had been raised in Persia by her cousin Mordecai.  She grows into a beautiful, young Jewish woman who becomes part of the Persian king’s harem after the king banishes the queen, Vashti, for her disobedience to him  (Esther 1).

Esther receives 12 months of beauty treatments and eats special food in preparation of being presented to the king. 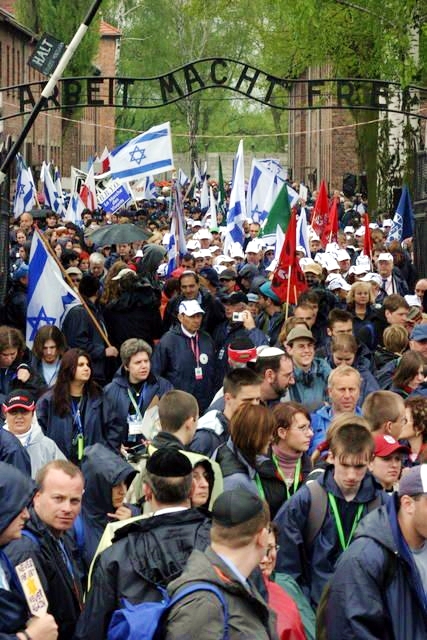 During World War II, Hitler tried to exterminate the Jewish People in Europe.  By the time the war was over, six million Jews had perished.  In the above photo, taken at Auschwitz concentration camp, adults and youth alike take a stand against anti-Semitism, racism and indifference during the annual March of the Living.

The hidden hand of God is at work in her life while living in the king’s harem.  He falls head over heels in love with her.  The king loves her so much, in fact, that he singles her out to marry her and be his queen.

The king does not know, however, that Esther is a Jew, since Mordecai had advised her not to reveal her identity.

While Esther is serving as queen, Mordecai uncovers a plot to kill the king, which saves the king’s life.  Yet, Mordecai’s loyalty to the king does not earn him favor with the king’s chief minister, Haman, who is appointed after this event.

Mordecai, who sits daily at the palace gate, refuses to bow to Haman.

In retaliation, Haman plots the deaths of all Jews living in the empire.

With the king’s permission, he casts lots (purim) to determine the best date on which to carry out the massacre.  It falls on Adar 13.

Mordecai advises Esther to bravely go to the king to plead with him for their lives.

Going in to see the king may, of course, seem like the logical thing to do, but it will put Esther’s life in immediate danger.

Even though she is queen, Esther cannot come into the king’s presence without him first summoning her.  She tells Mordecai that she may be put to death if she shows up uninvited.  But Mordecai reasons with her,

“Do not imagine that you in the king’s palace can escape any more than all the Jews.  For if you remain silent at this time, relief and deliverance will arise for the Jews from another place and you and your father’s house will perish.  And who knows whether you have not attained royalty for such a time as this?  (Esther 4:13–14) 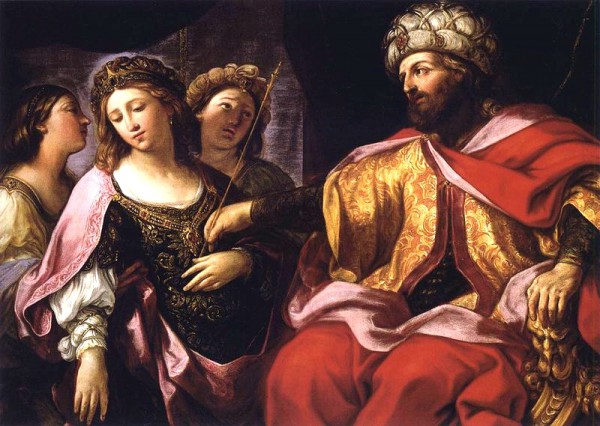 Though the name of God is not mentioned in the Book of Esther, she commits her ways to the Lord by calling her people to a three-day fast before entering the king’s presence: 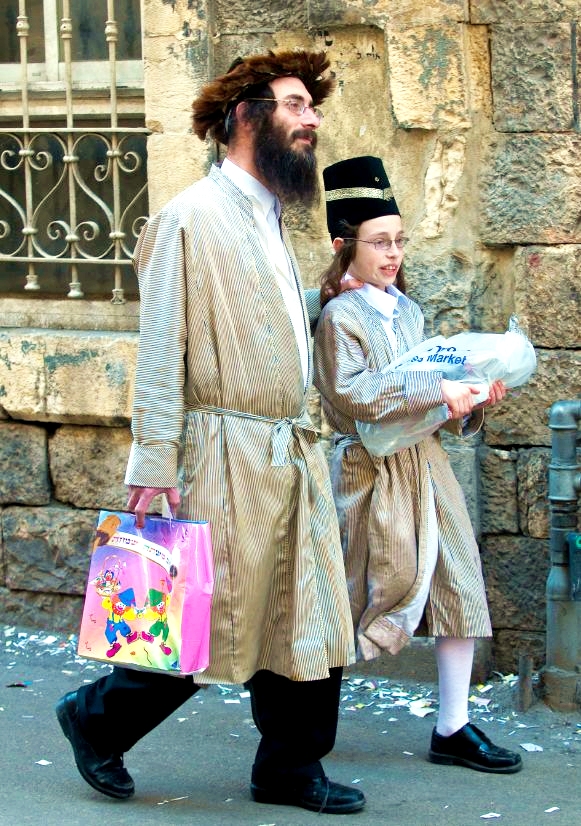 An ultra-Orthodox Jewish father and his son are dressed in Purim costumes (perhaps as Mordechai) as they walk through the narrow streets of Mea Shearim in Jerusalem. They are carrying mishloach manot (Purim baskets/ gifts).

She fasts for three days before going to the king, and when she enters his presence, she finds his grace, instead of his wrath.

In a series of comical twists and turns (you’ll have to read Esther to find out what they are), God humbles the proud and exalts the lowly who trust in Him.

Esther, the Jewish orphan who rose to become a Persian Queen, finally has the opportunity to expose Haman and save the Jewish People from his savage plot to destroy them.

Esther: A Picture of the Body of Messiah

On the surface, the Book of Esther has some simple lessons. But digging deeper, it also reveals surprising mysteries.

The heroine, Esther, seems to reflect the Bride of Messiah (His followers) in several ways:

She is not like the former Queen Vashti, who was rebellious to her husband and king, perhaps occupied with her own “agenda” and, therefore, banished from the kingdom.

The world is certainly occupied with its own agendas, wealth, and prestige.  But dedicated followers of Messiah are occupied with obeying and serving their Lord and Savior, Yeshua haMashiach (Jesus the Messiah). 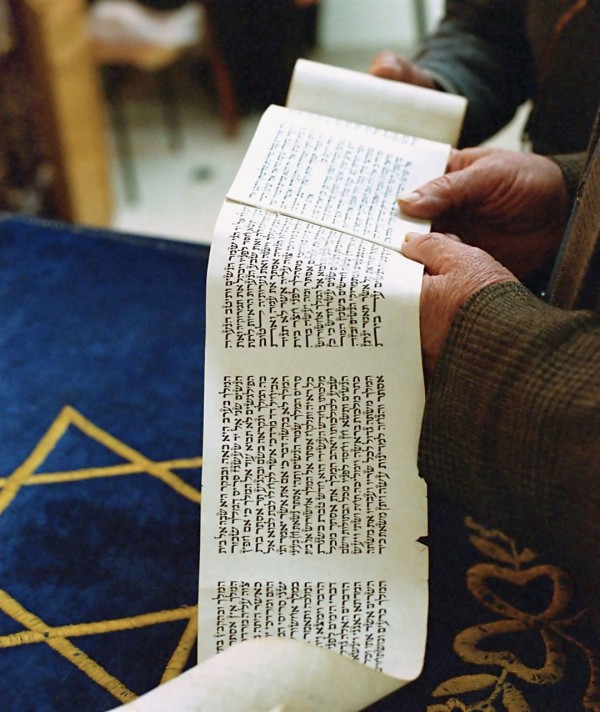 The Megillat Esther (Scroll of Esther) is read twice on Purim, once on the Eve of Purim and once during Purim day.

Likewise, Esther occupied herself with her duties as queen as well as her duties to the Jewish People.

Esther submitted herself to a prolonged preparation time before being brought into the king.  She was anointed with oil of myrrh (which is symbolic of suffering, cleansing, healing, and anointing), as well as beautifying preparations and perfumes.  (Esther 2:12)

Esther desired to please the king; therefore, over all the other women seeking to be elevated to the position of queen, she was chosen as his bride.

This process begins with the anointing of the Ruach HaKodesh (Holy Spirit), who washes and renews us (Titus 3:5), brings us into unity (Ephesians 4:3) and enables us to obey the truth (1 Peter 1:22), among other important works. 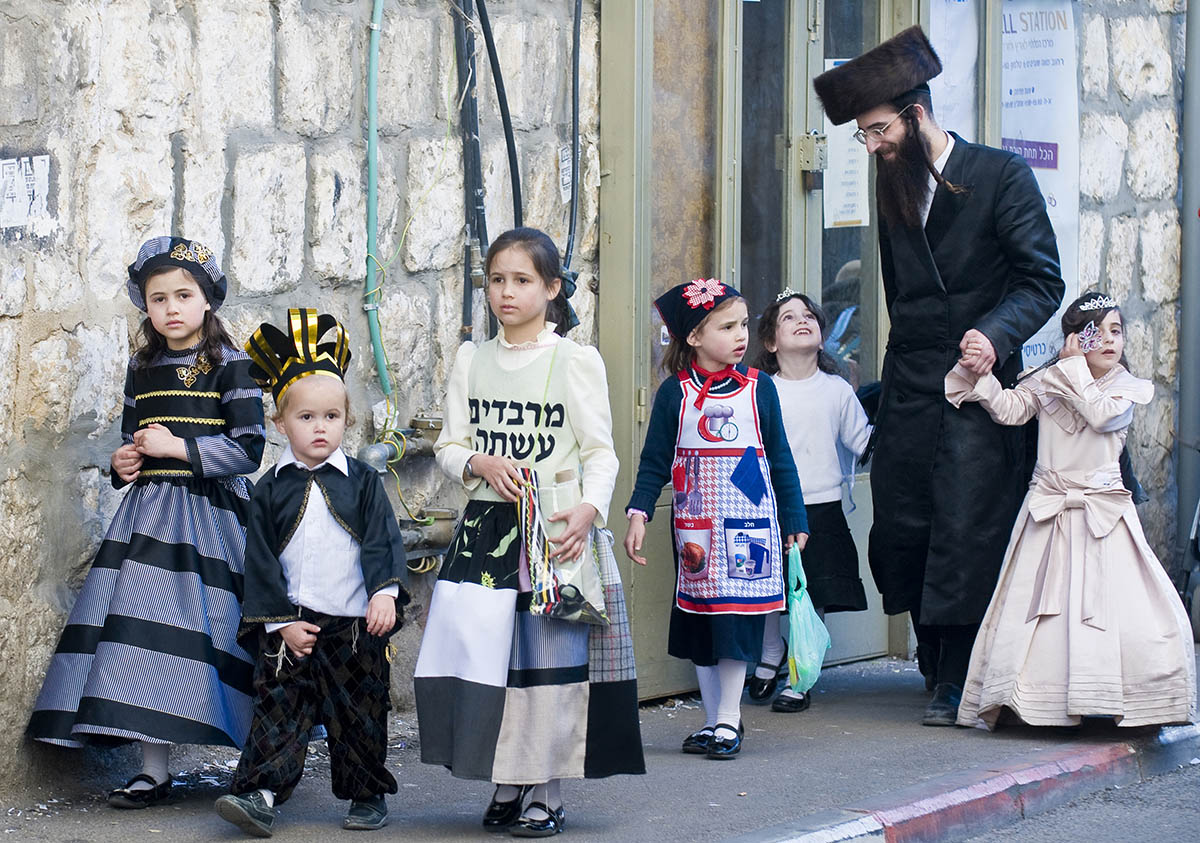 Esther was faithful, beautiful, pure, and courageous—even to the point of being willing to lose her life to save her brethren.

With the help of the Ruach (Spirit), the Bride of Messiah is called to be faithful to God’s word, beautifully pure in spirit, and courageous in sharing the truth of who Yeshua is.  As a result of their courage, many Believers suffer severe persecution, even death.

Esther relied on God and not her own talents and natural abilities.  She sought God through fasting and prayer before embarking on a courageous plan of action.

So, too, Believers know they cannot accomplish anything for the kingdom of God without relying totally on God’s leading and protection.

Esther carried the full authority of the King and the seal of his signet ring to issue decrees that cannot be revoked (Esther 8:8).

Likewise, Yeshua gives His followers the authority to defeat the works of the enemy (Luke 10:19). 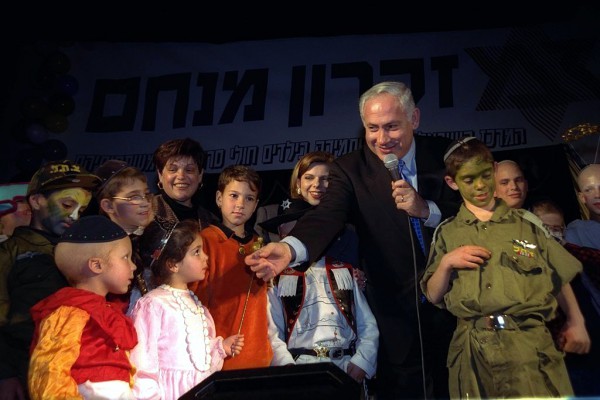 Israeli Prime Minister Benjamin Netanyahu and his wife Sara participate in a Purim party in Jerusalem that is held in honor of children with cancer.

Purim: More Than a Time to Remember

Purim is also a time for Believers around the world to heed the call of the Ruach HaKodesh (Holy Spirit) to rise up like Esther on behalf of the Jewish People.

Today, forces in modern-day Persia (Iran) again seek to annihilate Israel.  Moreover, anti-Semitism is on the rise in nearly every nation, even in the United States and throughout Europe.

A European Union (EU) report published in December states that “anti-Semitism pervades everyday life” in EU member states and “anti-Semitic harassment is so common that it becomes normalised.”  (EUFRA)

In 2018, hate crimes against Jews in New York totaled more than all other targeted groups combined.  (Haaretz) 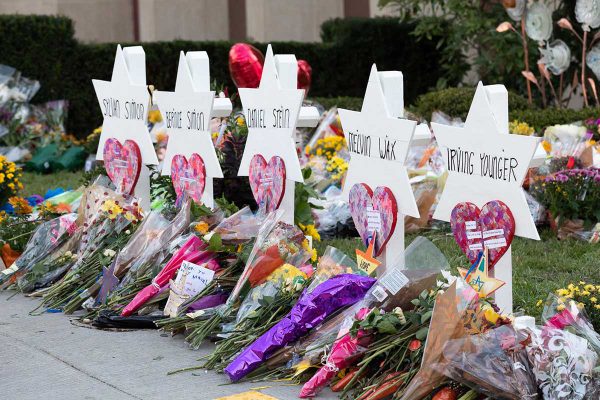 A memorial for the 11 people killed in the Tree of Life Synagogue massacre in Pittsburgh during October, 2018, the worst crime against Jews in US history.

In these end times, it will take courage to count the cost of speaking out and saying with Esther, “If I perish, I perish.”

Indeed, now is not the time to remain silent.

A poem attributed to Martin Niemoeller, an influential Lutheran pastor from World War II, who was arrested and imprisoned in the Dachau concentration camp for withdrawing his support of Hitler, illustrates the importance of challenging hatred and injustice:

They came first for the communists,
And I didn’t speak up because I wasn’t a communist.

Then they came for the Jews.
And I didn’t speak up because I wasn’t a Jew.

Then they came for the Catholics,
And I didn’t speak up because I was a Protestant.

Then they came for me,
And by that time, no one was left to speak up. 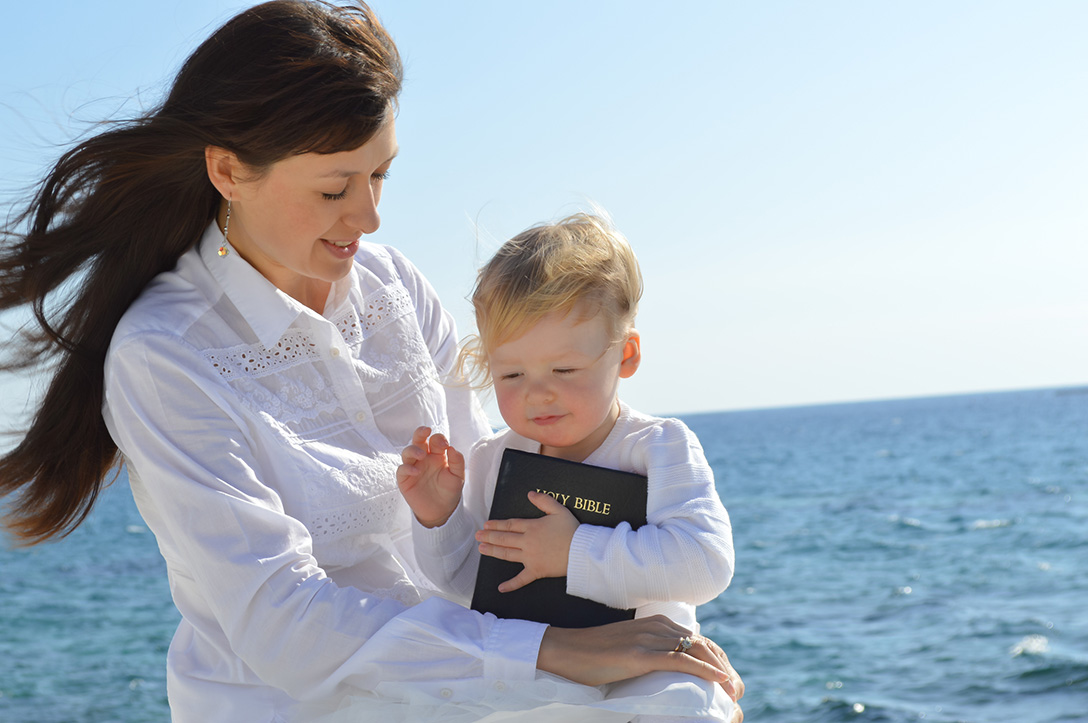 Feature
Elisha: the Hebrew Prophet of Love and Compassion

About 150 years after David was king over Israel, God called the Hebrew prophet Elisha to be Elijah’s main disciple and successor. When Elijah had come on the scene, Israel had fallen into a state of extreme apostasy under the leadership of Queen Jezebel and King Ahab, as well as their forerunners.