Tu B’Shvat and the Spiritual Restoration of the Holy Land

“I will put in the desert the cedar and the acacia, the myrtle and the olive.  I will set junipers in the wasteland, the fir and the cypress together, so that people may see and know, may consider and understand, that the hand of the Lord has done this.”  (Isaiah 41:19–20) 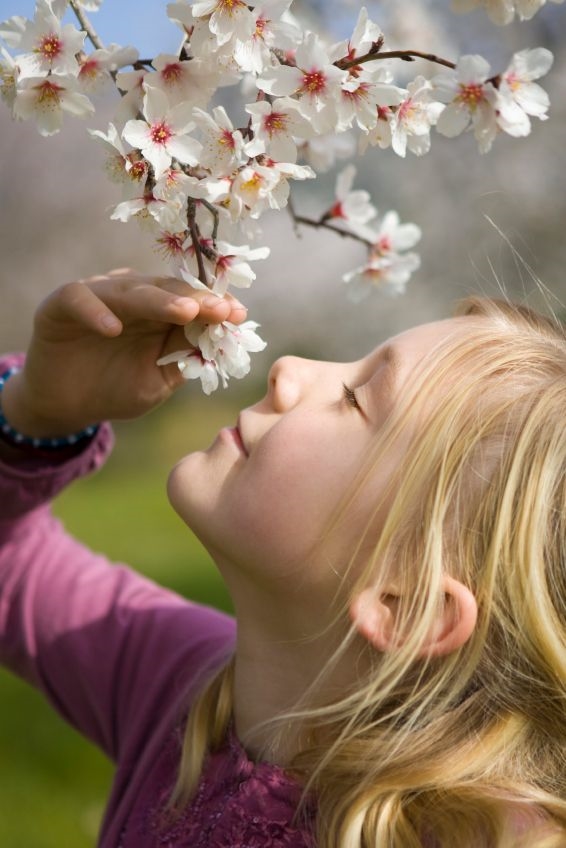 Next week is a special holiday called Tu B’Shvat, also known as the New Year for the Trees.  In synagogues around the world today, there are activities and prayers of thanksgiving to the Lord who has given us the Land of Israel and all its goodness.  According to the rabbis, this is the time when the people of Israel offered to God the tithe of the first fruits of their crops.  (Deuteronomy 26:1–2)

The name of this holiday is literally derived from the date on which it falls, the 15th of the Hebrew month Shvat.  The Hebrew word “Tu” is formed by the letters tet and vav that correspond to the numbers 9 and 6, adding up to 15.

Tu B’Shvat marks the beginning of spring in Israel and is one of four annual “new years” described in the Mishnah (Oral Tradition).

By this time in Israel, most of the rains have already fallen, and the sap is beginning to rise.

It’s beautiful to witness the almond trees (called sh’keidim in Hebrew) blossoming as the first tentative sign of spring.

During this time, the natural world is celebrated and thanksgiving is offered for the fruits of the earth and everything that grows. 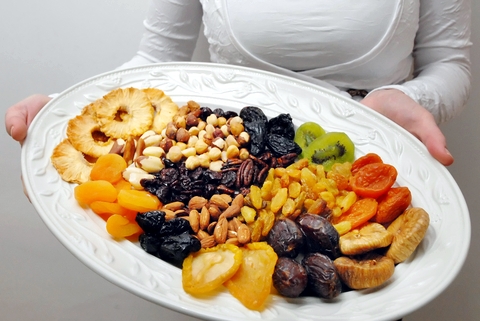 It is traditional to have a ceremonial meal on Tu B’Shvat, in which fruits from the Holy Land are eaten, particularly those for which Israel is famous: olives, dates, grapes, figs and pomegranates.

The following blessing is recited over the fruit:

Baruch ata Adonai Eloheinu melech ha’olam borei pri ha’etz.  Blessed are You, Lord our God, King of the universe, who creates the fruit of the tree.

In Israel and in Jewish communities outside the Land, it’s also customary to eat dried fruits and nuts from trees such as fig, date, and almond.

As well, Jewish school children around the world might be given dried carob pods from Israel to sample.

Here in Israel, the carob is now abundant and dried pods fallen from the trees litter the streets and walkways. 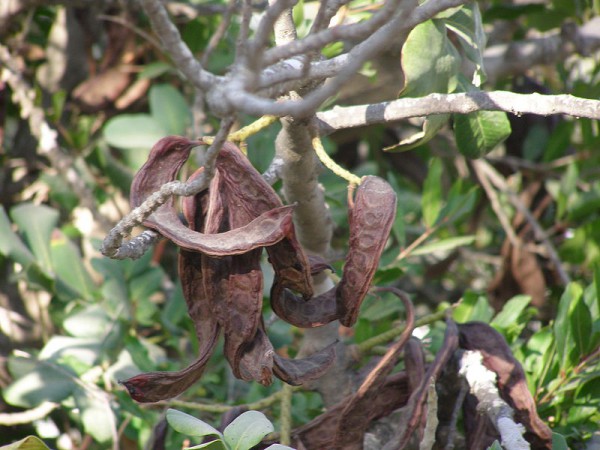 Dried carob pods still clinging to the tree in Israel.

Another Tu B’Shvat custom is planting trees in Israel, much like Arbor Day in the United States.

Hannah, one of our ministry workers remembers her family’s first Tu B’Shvat in Israel.

“We rode the buses, searching for a place to plant our sapling.  We tenderly laid our little tree in the hole we had dug in the hard dirt with our hands, since we had no tools.”

“I wept as I realized our tiny contribution to the awesome fulfillment of prophecy for this land.” 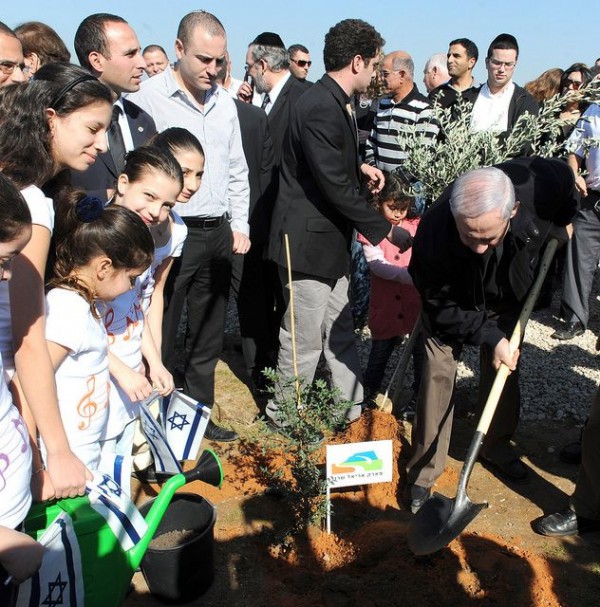 The custom of planting trees in Israel originated in 1890 when Rabbi Ze’ev Yavetz, one of the founders of the Mizrachi movement, took his students on Tu B’Shvat to the agricultural colony of Zichron Yaakov to plant trees.

In 1908, the Jewish Teachers Union adopted tree planting as a national endeavor.  Later, the Jewish National Fund (JNF), which was established in 1901 to oversee land reclamation and reforestation of the Land of Israel, also adopted this custom.

Planting trees is important in Israel, where the land was once almost totally devoid of trees.

It not only provides beauty and ecological balance, it can also protect national health.

Early in the 20th century, the JNF effectively stopped an outbreak of malaria in the Hula Valley (north of the Sea of Galilee) by planting eucalyptus trees.

Today, the tradition of planting trees on Tu B’Shvat continues, and Israel is one of two countries in the world actually increasing their tree population rather than diminishing it. 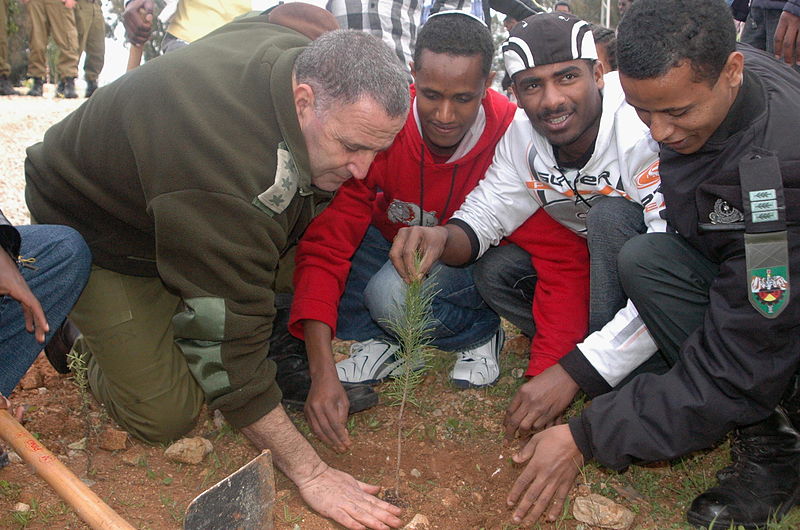 Every year the JNF schedules major tree-planting events in Israel, and over a million Israelis take part each year.

Since 1901, the JNF has planted over 250 million trees.  Today, it is focused on diversifying the landscape with trees indigenous to the Middle East, including native oak, carob, redbud, almond, pear, hawthorn, and cedar.

The JNF also reaches out to the nations to promote the reforestation of Israel with an annual worldwide campaign on Tu B’Shvat.  For $18 anyone from anywhere in the world can have a tree planted in Israel.

Why 18?  When the numerical value of the Hebrew word Chai (life) is totaled, it equals the number 18.  Therefore according to Jewish custom, gifts and donations are often given in multiples of 18 to symbolize the desire that the gift will bring forth life. 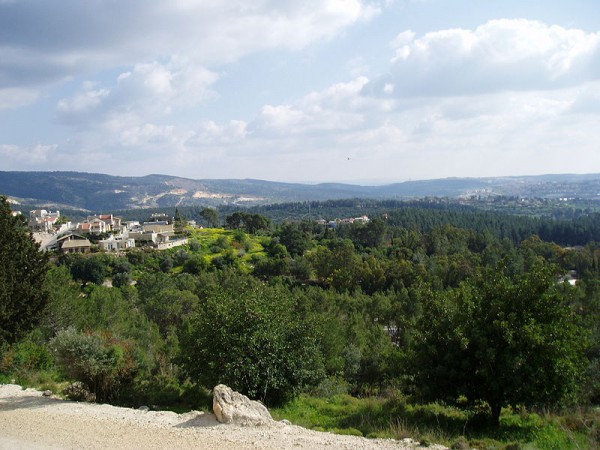 Eshtaol Forest, which is north of Beit Shemesh, is one of several forests planted by the Jewish National Fund in Israel.

“Israel shall blossom and bud, and fill the face of the world with fruit.”  (Isaiah 27:6)

Even though Tu B’Shvat is a national Israeli chag (festival) rather than a Biblical one, it does have prophetic significance.

Most people are aware that for approximately two thousand years, since the destruction of the Temple in Jerusalem, the Land of Israel lay desolate.  It was a wilderness, practically uninhabitable, and void of vegetation.

In 1867, Mark Twain described its barrenness in The Innocents Abroad (one of the best-selling travel books of all time):

[Israel is a] desolate country whose soil is rich enough, but is given over wholly to weeds… a silent mournful expanse…. a desolation…. we never saw a human being on the whole route…. hardly a tree or shrub anywhere.  Even the olive tree and the cactus, those fast friends of a worthless soil, had almost deserted the country.”

This desolation was a direct result of sin. 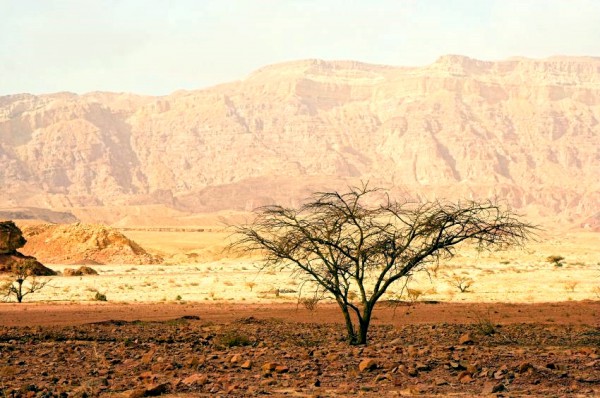 God warned His people over and over again to repent, but they wouldn’t listen to the warnings of His prophets.

He had no choice but to carry out all the curses of the Mosaic Covenant, which the nation of Israel willingly entered at Mt. Sinai, as is written in Deuteronomy 28.

However, if you do not obey the Lord your God and do not carefully follow all his commands and decrees I am giving you today, all these curses will come on you and overtake you…  The sky over your head will be bronze, the ground beneath you iron.  The Lord will turn the rain of your country into dust and powder; it will come down from the skies until you are destroyed.  (Deuteronomy 28:15, 23–24)

The desolation of the land and exile of the people would stand as stark evidence of God’s wrath to all the surrounding Gentile nations.

All the nations will ask: “Why has the Lord done this to this land?  Why this fierce, burning anger?”  And the answer will be: “It is because this people abandoned the covenant of the Lord, the God of their ancestors, the covenant He made with them when He brought them out of Egypt.”  (Deuteronomy 29:24–25, see also Jeremiah 9:1–14) 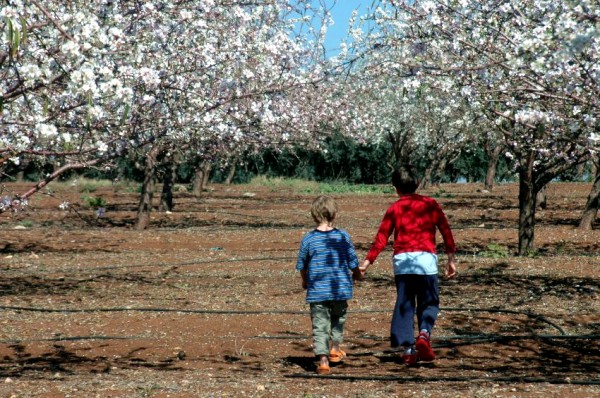 Brothers walk hand-in-hand amid the blossoming trees of an almond plantation in northern Israel.

The good news is that God is merciful and He promised a future time of restoration, when an ecological miracle would take place: the desert would blossom like a rose; the wilderness would be transformed into a Garden of Eden; trees would once again produce fruit; the land would be re-inhabited; and its cities rebuilt.

“For the Lord will comfort Zion, He will comfort all her waste places; He will make her wilderness like Eden, and her desert like the garden of the Lord.”  (Isaiah 51:3)

That time is now!  God has returned His favor unto Jerusalem and all Israel once again. 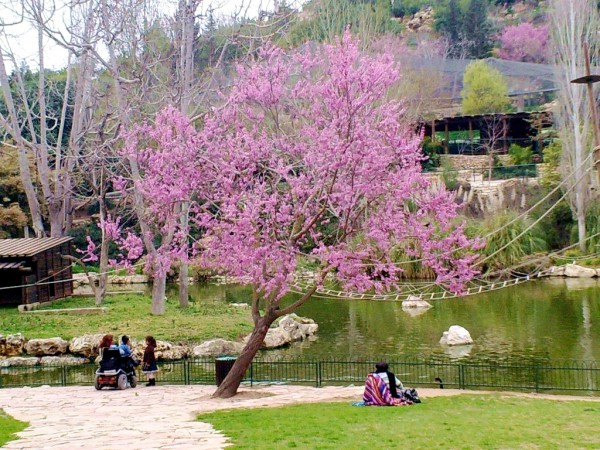 Trees in blossom at the zoo in Jerusalem

Israel, a land once barren and lifeless, is now an exporter of fruits and flowers to the world, as foretold in Isaiah 27:6.

In the future, in the New Jerusalem, fruit-bearing trees with leaves that bring healing will line the sides of the river that flows from the sanctuary of God.

“Fruit trees of all kinds will grow on both banks of the river.  Their leaves will not wither, nor will their fruit fail.  Every month they will bear fruit, because the water from the sanctuary flows to them.  Their fruit will serve for food and their leaves for healing.”  (Ezekiel 47:12, see also Revelation 22:1–3) 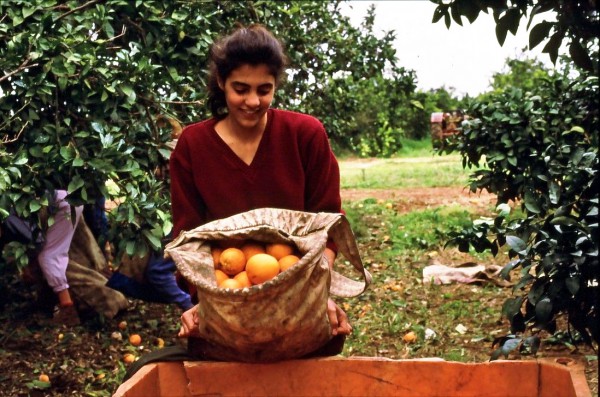 “When you lay siege to a city for a long time, fighting against it to capture it, do not destroy its trees.”  (Deuteronomy 20:19)

God so values trees, and the people and animals that depend on them, that the Torah actually forbids their destruction during times of war.

The enemies of Israel, however, pay no heed to this, and often, the forests of Israel suffer terrible devastation from missile attacks and bombings.

We don’t usually think of trees as casualties of war, but when forests are destroyed by missile attacks, it’s considered a great tragedy in Israel.

Forest fires also have been linked to Arab terrorist organizations. 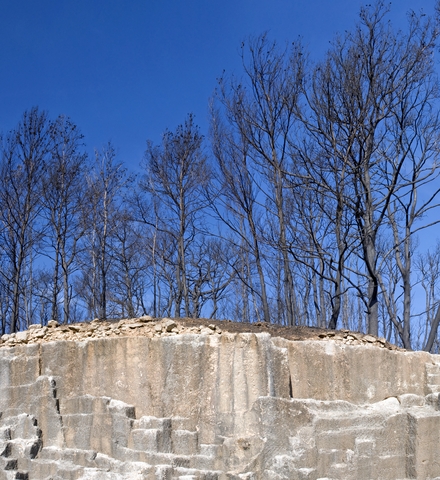 Afforestation, therefore, represents healing and restoration, not only of the Land, but also of the people, since the Land and the People of Israel are forever linked in an inseparable covenant.

We are reminded by this custom of planting trees on Tu B’Shvat that the restoration of the land of Israel is a miracle of God, but it also has come about through partnership with man—through hard work and sacrifice, as well as irrigation.

The spiritual restoration of Israel, which is promised in Ezekiel 37, will be a mighty move of God, but it will also come through the hard labor and sacrificial efforts of people like you.

Will you stand with Israel and partner with God to see spiritual as well as physical restoration come to this Land?