Christians Stand with Israel and Pray for Jerusalem 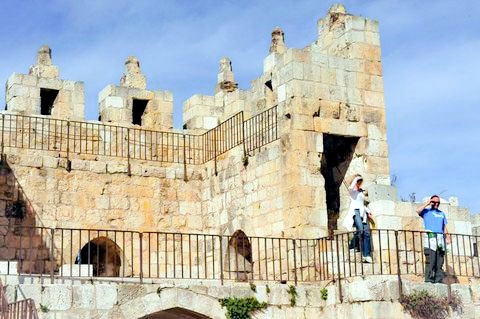 “I have posted watchmen on your walls, Jerusalem; they will never be silent day or night.  You who call on the LORD, give yourselves no rest, and give him no rest till he establishes Jerusalem and makes her the praise of the earth.”  (Isaiah 62:6-7)

“Pray for the peace of Jerusalem: ‘May those who love you be secure.  May there be peace within your walls and security within your citadels.’  For the sake of my family and friends, I will say, ‘Peace be within you.’”  (Psalm 122:6-8)

A Christian multitude rallied to “Stand with Israel” last Sunday on Washington, DC,’s Capitol Hill, with millions more partaking in the yearly Day of Prayer for the Peace of Jerusalem, also on Sunday.

As representatives of the Messiah, believing Gentiles serve as advocates by interceding for the Jewish people, recalling the Lord’s words:

“I looked for someone among them who would build up the wall and stand before me in the gap on behalf of the land so I would not have to destroy it, but I found no one.”  (Ezekiel 22:30) 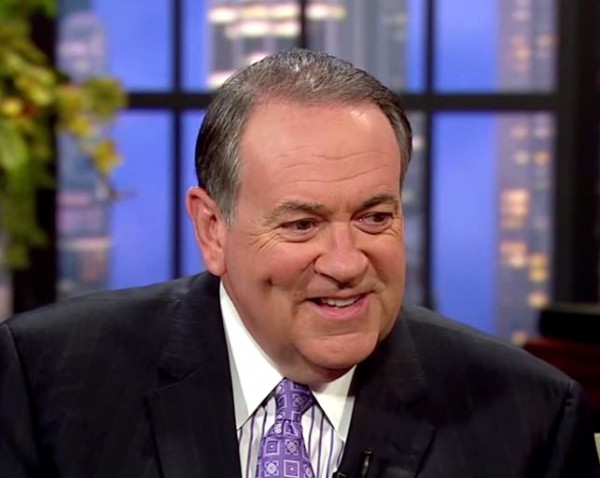 On October 5, thousands of Pro-Zionist Christians took up the call in the two-hour “Stand with Israel” rally on Capitol Hill.

Co-sponsored by Concerned Women for America and former Arkansas governor Mike Huckabee, the rally issued a strong message that America’s Christians must stand with Israel—as the right thing to do and as Israel stands at the front lines between America and her enemies.

CWA president Penny Nance also said that she was prompted to support Israel during a visit to Yad Vashem Holocaust Memorial in Jerusalem, where she came to understand the depth of evil facing the Jewish people.

“If I had been alive during the Holocaust, what would I have done?”  Nance asked the crowd.  “Would I have been one of those people, one of those Christians, who just turned away and turned a blind eye to the evil that was right before me?”  (CBN) 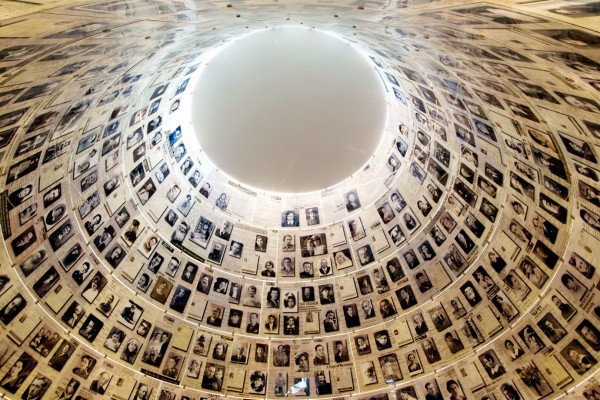 The ceiling of the Hall of Names at Yad Vashem, Israel’s official memorial to the victims of the Holocaust, comprises a ten-meter high cone reaching skyward.  That cone exhibits 600 photographs and fragments of Pages of Testimony, a small fraction of the six million Jewish men, women and children who were murdered by the Nazis and their accomplices.

The Washington Post blogger Jennifer Rubin said the rally leaders argued that the U.S. administration is “insufficiently supportive of Israel and clueless about the enormity of the jihadist threat.”

“These Zionists understand Israel and the U.S. are up against the same Islamist fundamentalists who want to cleanse Christians, Jews and non-fundamentalist Muslims from their midst,” Rubin writes.

“Israel isn’t the ultimate target.  We are.  Let us never forget it,” Huckabee said at the event. 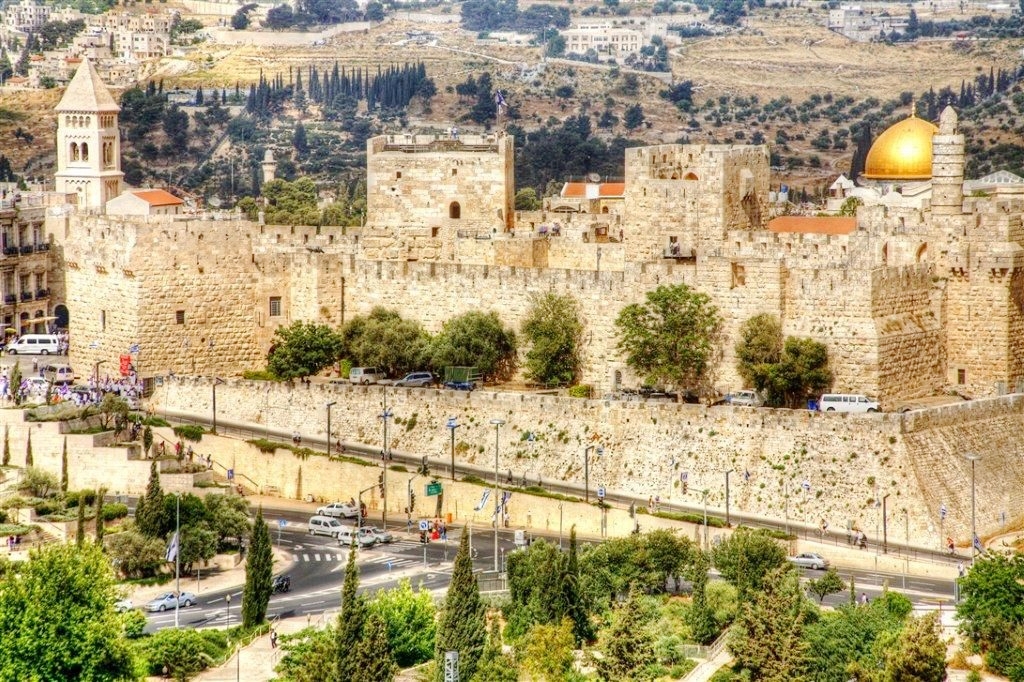 Meanwhile, the Day of Prayer for the Peace of Jerusalem brought together believers in 175 nations “to pray in their worship services, in their homes, in regional gatherings, on the prayer app Instapray, and on a 24-hour prayer conference call,” writes Charisma News.

“The current on-going clarion call to mobilize prayers for the peace of Israel … could not have been made at a better time than now,” said Mosy Madugba of the Ministries Prayer Network, a Day of Prayer endorser.  “The evil one is mobilizing the nations against Israel, only an effective, global, coordinated prayer effort can save Israel.”

The Consul General of the State of Israel in New York, Asaf Shariv, also issued support for the Day of Prayer.

“I think it’s always the time to pray for Jerusalem.  In the last six years, you know, Israel has been under constant attack, and recent years and the last month it’s getting worse,” Shariv said.  “The Iranian regime, Hamas, and Hezbollah—everybody’s aiming at Jerusalem.  That’s why it’s so important to pray for it and to fight for it, because it is the eternal capital of the Jewish people and the eternal and undivided capital of the State of Israel.” 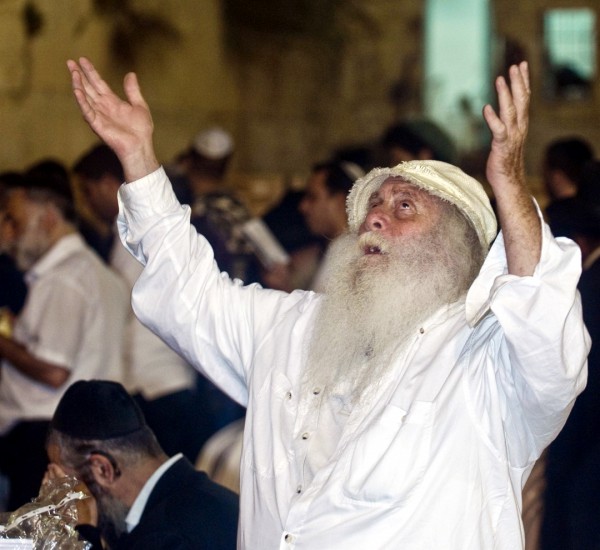 A Jewish man prays at the Western Wall on Yom Kippur.

The huge cloud of Christian prayer surged to Heaven the day after Yom Kippur (the Day of Atonement), when Jews worldwide issued a final flood of repentance, praise and pleading for their names to be written in the Book of Life—before it is sealed for the next year.

“The gates of Heaven are closing … and now they’re closed,” said the rabbi of one egalitarian synagogue at the end of the holy day, painting a sad picture of God becoming less accessible to mankind.

As millions of Jews stand before God each year to seek atonement for their sins, congregating on the Day of Atonement evokes the legal proceedings that will take place on the final Judgment Day when the Heavenly record of all human deeds will be examined and weighed:

“Then I saw a great white throne and him who was seated on it.… And I saw the dead, great and small, standing before the throne, and books were opened.  Another book was opened, which is the book of life.  The dead were judged according to what they had done as recorded in the books.”  (Revelation 20:11-12) 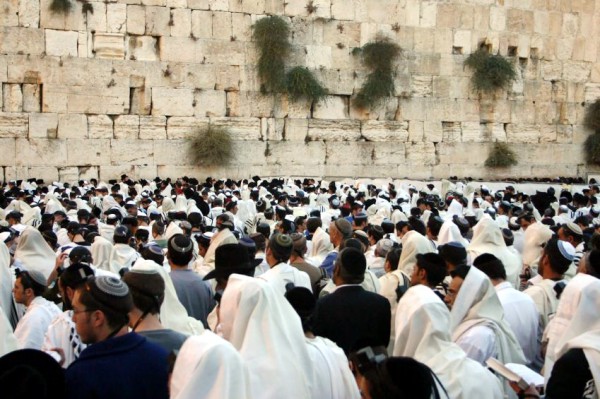 Yom Kippur at the Western (Wailing) Wall in the Old City of Jerusalem.

The Day of Atonement represents the holiest day on the Jewish calendar and provokes the entire spectrum of Jews to fast from food and water and to join together as a community to seek God’s mercy.

As in a court room, the Jewish people stand as defendants awaiting the final ruling of the Judge.

God has, of course, assigned an advocate—the One who serves to plead their case and to seek mercy in judgment and wipe clean their sins.

“If anybody does sin, we have an advocate with the Father—Yeshua the Messiah, the Righteous One.  He is the atoning sacrifice for our sins, and not only for ours but also for the sins of the whole world.”  (1 John 2:1–2)