Is Nazareth Prophesied in the Bible? 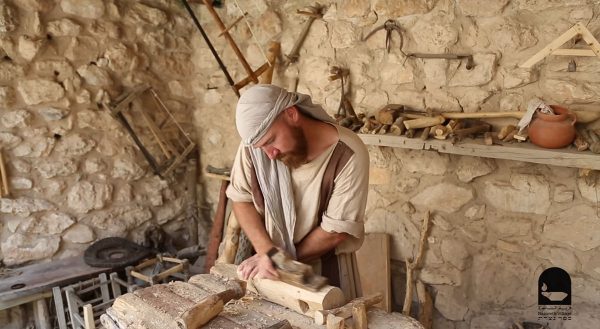 “Having been warned in a dream, [Joseph] withdrew to the district of Galilee, and he went and lived in a town called Nazareth.”  (Matthew 2:22)

Despite the idea of some Jews that nothing good could come from Nazareth,  others who lived in the Galilee understood that something very good, even Divine did indeed come from there.

Let’s see how the Tanakh (Old Testament) gives us clues and prophecies about the village of Nazareth and the promised Messiah. 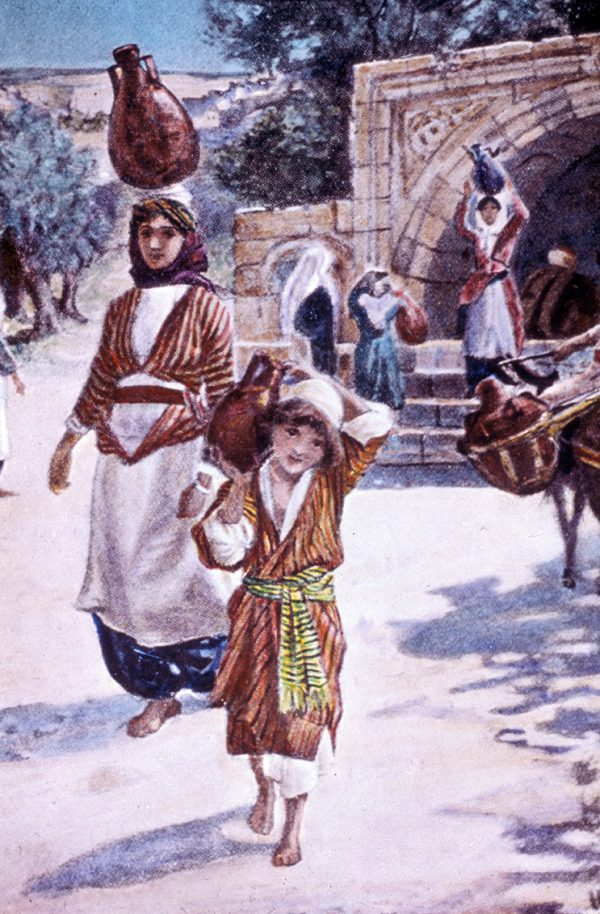 Nazareth: The Town Where the Branch Grew

While Nazareth is not mentioned in the Tanakh (Old Testament), it is mentioned 12 times in the Brit Chadashah (New Testament).

And it might relate to the Hebrew word used for the Messianic Branch (Netzer – נֵצֶר) in the Book of Isaiah.

“A shoot will spring from the stem of Jesse [King David’s father], and a branch [netzer] from his roots will bear fruit.”  (Isaiah 11:1)

This connection between natzeret and netzer is especially probable since both words share the same root:   נֵצַר – N–TZ (Tzadik) –R, which in Hebrew is the word natzer, meaning watchman, guardian, and keeper. 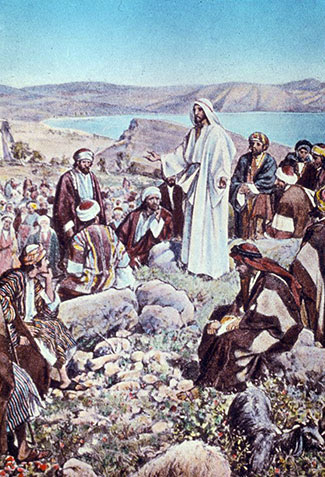 Yeshua Goes Up to a Mountain to Pray, by William Hole

Certainly, while Yeshua was with us on earth, He saw Himself as the guardian of God’s Chosen People.  He prayed to the Father about those under His care:

“While I was with them, I was keeping them in Your name which You have given Me;  and I guarded them and not one of them perished but the son of perdition, so that the Scripture would be fulfilled.”  (John 17:2)

Some might think that the words Natzeret and Netzer are also related to the Nazirite vow in some way (Numbers 6:1–21), but this is not so since Nazirite (from the Hebrew word nazir) is spelled using different Hebrew letters:  נזר – N–Z (Zayin) –R.

Moreover, Yeshua did not fulfil the requirements of a Nazirite.

“But you, Bethlehem Ephrathah, though you are small among the clans of Judah, out of you will come for me one who will be ruler over Israel, whose origins are from of old, from ancient times.”  (Micah 5:2; see also 1 Samuel 16) 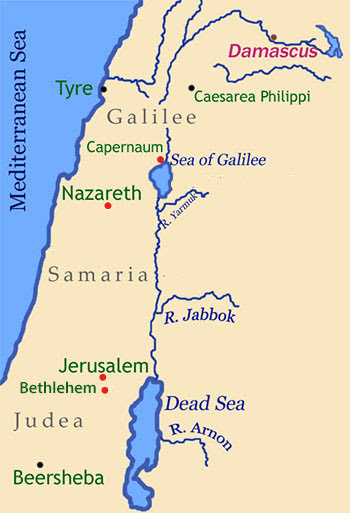 After spending time in Egypt with his wife Mary and young Yeshua, Joseph was told in a dream not to settle in Judea but to move back to Nazareth of the Galilee, where he and Mary had been living before Yeshua was conceived through the Holy Spirit.

In addition to the words Nazareth (Natzeret) and Branch (Netzer) having similar spelling and sound, another clue that Nazareth could be connected to the arrival of the Messiah comes again from the Book of Isaiah.

God promised that “in the latter time He will make glorious the way of the sea, the land beyond the Jordan, Galilee of the nations.”  (Isaiah 9:1; see also Matthew 4:13–16)

Nazareth is in the southern Galilee, built on the slope of the southwest side of the Jezreel Valley.  Surrounded by several rounded hills, it has been poetically described by a 17th century topographer as a rose:

“Nazareth is a rose, and, like a rose, has the same rounded form, enclosed by mountains as the flower by its leaves.”  (by Quaresimus, as quoted in Sinai and Palestine, p. 365) 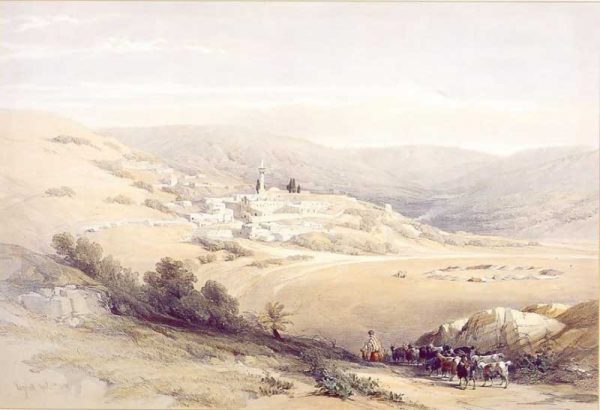 Nazareth in 1842, by David Roberts

These “rose petals” or surrounding hills/small mountains, seem to form a hedge of protection around the town, which is why Nazareth is called “the Guarded City,” so named (as mentioned above) from the Hebrew root natzrat, which means to guard.

Because Nazareth is built among mountains, several cliffs or precipices line the landscape, offering the local residents an all-too-tempting method of capital punishment for anyone they disagreed with.

This was the case when the Jewish men placed a death sentence on Yeshua (Jesus), who travelled through His hometown soon after being anointed by the Holy Spirit to begin His ministry. 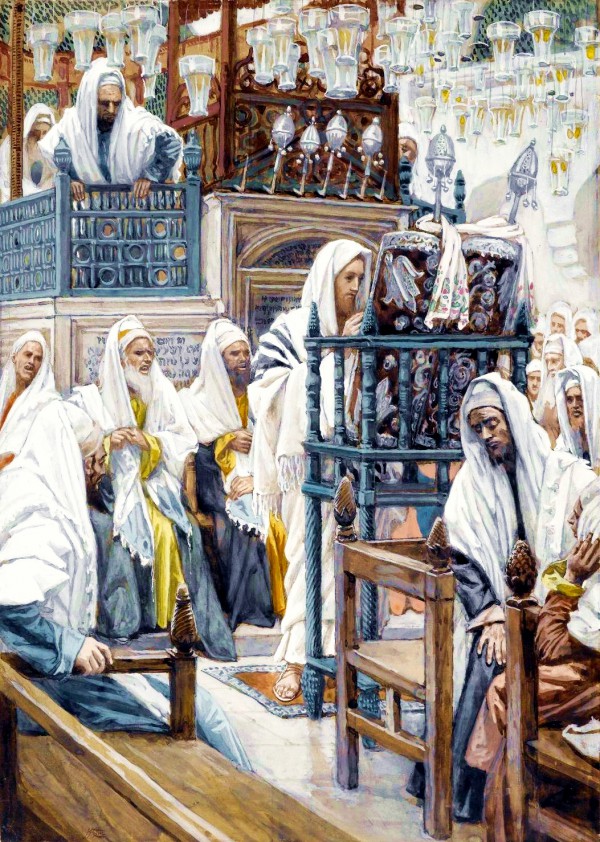 Yeshua Unrolls the Scroll in the Synagogue,
by James Tissot

One Shabbat He was called upon in the synagogue to read the Haftarah portion (Scripture from the prophets).

Yeshua read that God anointed Him “to proclaim good news to the poor, … freedom for the prisoners and recovery of sight for the blind, to set the oppressed free,” as prophesied by Isaiah.  (Luke 4:16–19; Isaiah 11:1–11)

At first, “the Jewish men were amazed at the gracious words that came from His lips.”  (Luke 4:22)

But they started asking, “Isn’t this the son of Joseph?”

Yeshua declared that one of His roles was a prophet when He said, “No prophet is accepted in his hometown.”

They were amazed at His preaching, but He then pierced their pride by reminding them that God had not sent the Prophet Elijah to heal any of the Jews in Israel.  Instead, God sent Elijah to heal two Gentiles in Lebanon and Syria (Luke 4:24–27).

The men in the synagogue were appalled at Yeshua suggesting that God loved Gentiles just as much as Jews.

They took Him to the brow of the hill on which the town of Nazareth was built in order to throw Him off the cliff, but He walked through the crowd and escaped.  (Luke 4:29–30) 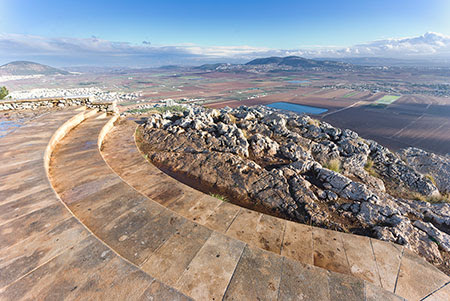 Mount Precipice in Hebrew is Har HaKfitsa, meaning Mount of the Leap.  Located just two km south of Nazareth, it overlooks the Jezreel Valley with several steep ridges that would cause certain death if one fell from them.

It’s easy to forget in the midst of all our petitions and intercessions how much persecution Yeshua endured for us and continues to endure as people scorn Him and blaspheme His name, even to this day.

It is just as King David prophetically wrote:

“Reproach has broken my heart and I am so sick.  I looked for sympathy, but there was none, and for comforters, but I found none.  They also gave me gall for my food, and for my thirst they gave me vinegar to drink.”  (Psalm 69:19–21)

An authentic reconstruction of a 1st century synagogue built in the historical Nazareth Village.  The interior, however, would have been colorfully decorated with murals, mosaics, and the like.

Seeing Yeshua for Who He Is — The Branch

While the people of Nazareth rejected Yeshua in spite of the fact that he grew up there, others poked fun at Him because He grew up there, such as Nathaniel who said, “Can anything good come from Nazareth?”  (John 1:46)

Yeshua joked back, saying about Nathaniel, “He’s a true Israelite in whom there is nothing false!”  (John 1:47)

Israelis today are a lot like Nathaniel:  they are known to speak what is on their mind;  they can be unfiltered with their direct opinions and responses.

But why did Nathaniel say such a thing?

Perhaps because Nazareth is located in the mountains with a different kind of lifestyle than the busy Jewish way of life in the city of Jerusalem or the fisherman’s life in the sea-faring towns of the Galilee.

As well, the Jewish People had missed so many of the prophecies that foretold the identity of the Messiah.  So, it was natural that Nathaniel would miss the prophecies and clues in the Book of Isaiah about the coming of the Branch to Nazareth in the Galilee.

Or, perhaps, Nathaniel did understand these prophecies and was expressing his doubts.  Or maybe he was just joking around. 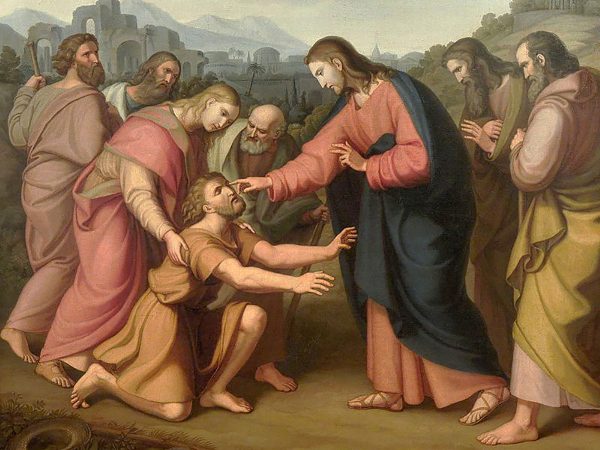 Nevertheless, not everyone thought like Nathaniel, such as a blind man sitting on a roadside who heard that Yeshua from Nazareth was passing by.

This man without physical sight somehow had great spiritual insight;  he understood that this Yeshua from Nazareth was the prophesied Netzer, his only hope. 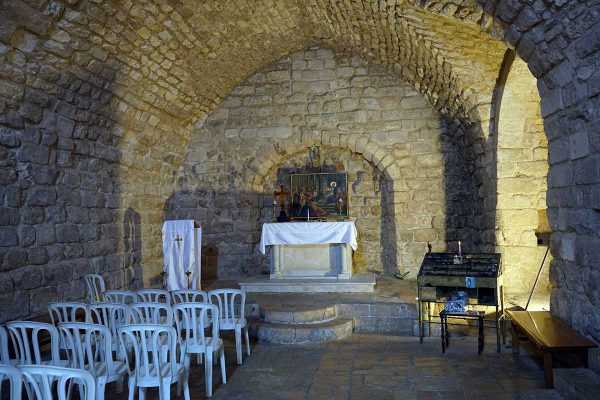 The Synagogue Church is built on the traditional spot in Nazareth where the synagogue in Yeshua’s day stood, the one in which Yeshua read from the scroll of Isaiah.

Known as “the Arab capital of Israel,” Nazareth is home to over 70,000 Arabs who are Israeli citizens.  Two-thirds of these Arabs are Muslim and one-third are Christian.

Shortly after the new modern state of Israel was birthed in 1948, a new housing development called Nazareth Illit (literally, Upper Nazareth) was built up on a hill, above Old Nazareth.

Today, about 7,000 Arabs live here, along with approximately 32,000 Jewish citizens who do not know Yeshua (Jesus) as their Messiah.

The houses of Nazareth Illit are attractive with orange roofs and flourishing gardens; the city hosts modern shopping malls, synagogues, and schools.

Nazareth Illit is also home to a Messianic fellowship. Imagine worshiping the King in the very place where Yeshua (Jesus) ate, played, studied, and worked until age 30 when He began His ministry.

Just like the Jewish men who drove Him out of the synagogue 2,000 years ago, today 99% of the Jewish people in Nazareth Illit do not believe Yeshua is the Messiah.

So, please support our ministry work as Bibles For Israel proclaims the truth of the Bible Scriptures and Prophecies proclaiming that Yeshua (Jesus) is the Messiah for both Jew and Gentile.