“So all the people went to Gilgal and made Saul king in the presence of the LORD.  There they sacrificed fellowship offerings before the LORD, and Saul and all the Israelites held a great celebration.”  (1 Samuel 11:15)

Archaeology continues to support the Biblical narrative of Israel’s history.

Israeli archaeologists recently uncovered two structures dating to 10th century BC which support the Bible’s account of the united Kingdom of Israel under King Saul, King David and King Solomon.

Prior to Saul, the tribes of Israel lived as a confederation under judges.

“This is unequivocal evidence of a kingdom’s existence, which knew to establish administrative centers at strategic points,” Professor Yosef Garfinkel of the Hebrew University and Saar Ganor of the Israel Antiquities Authority said.

“To date no palaces have been found that can clearly be ascribed to the early tenth century BCE as we can do now.”  (IAA) 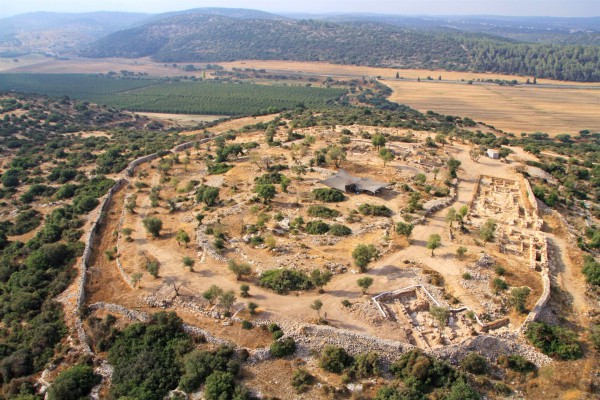 An aerial view of Shaaraim, the location of the palace and the storeroom.  (Photo courtesy of the Hebrew University and the IAA)

They are believed to be one of King David’s palaces and an enormous, pillared royal storeroom.

Archaeologists describe the palace as being located on a high place that gave it a vantage point with vistas reaching from the Mediterranean Sea on the west to the Hebron hills and Jerusalem on the east.

“The southern part of a large palace that extended across an area of about 1,000 square meters [about 11,000 square feet] was revealed at the top of the city.…  Around the palace’s perimeter were rooms in which various installations were found—evidence of a metal industry, special pottery vessels and fragments of alabaster vessels that were imported from Egypt,” the archaeologists said.  (IAA)

“Unfortunately, much of this palace was destroyed about 1,400 years later when a fortified farmhouse was built there in the Byzantine period,” they said. 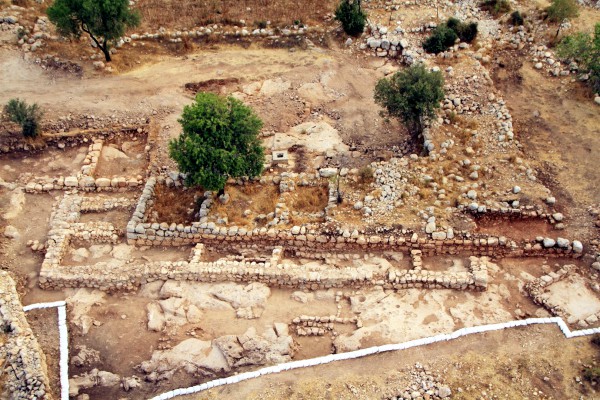 An aerial picture of King David’s palace and the Byzantine farmhouse.  (Photo courtesy of the Hebrew University and the IAA)

The pillared government storeroom found in the northern section of the city is 15 meters (50 feet) long by 6 meters (20 feet) wide.

“It was in this building the kingdom stored taxes it received in the form of agricultural produce collected from the residents of the different villages in the Judean Shephelah [foothills / lowlands].

“Hundreds of large store jars were found at the site whose handles were stamped with an official seal as was customary in the Kingdom of Judah for centuries,” the archaeologists stated. 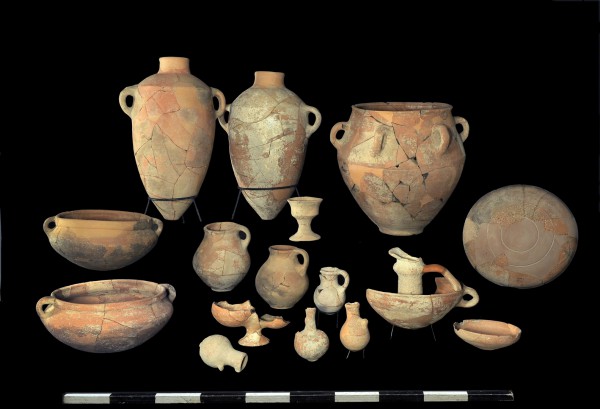 Finds from the site.  (Clara Amit, photo courtesy of the IAA)

The buildings were discovered during excavations at Khirbet Qeiyafa, which may mean “place with a wide view.”

The site is known as the Elah Fortress because it is located on the summit of a hill overlooking the Valley of Elah, which is thought to be the site of David’s epic battle with Goliath.  Bedouins call it Khirbet Daoud (David’s Ruin).

“This is the inheritance of the tribe of Judah, according to its clans…  Shaaraim, Adithaim, Gederah, and Gederothaim—fourteen towns and their villages.”  (Joshua 15:20, 36; see also 1 Samuel 17:52)

The discovery of the Biblical city has led the IAA and the Israel Nature and Parks Authority to recommend that urban development plans made for the area be canceled and that a new park be constructed to protect the site.  (Israel HaYom) 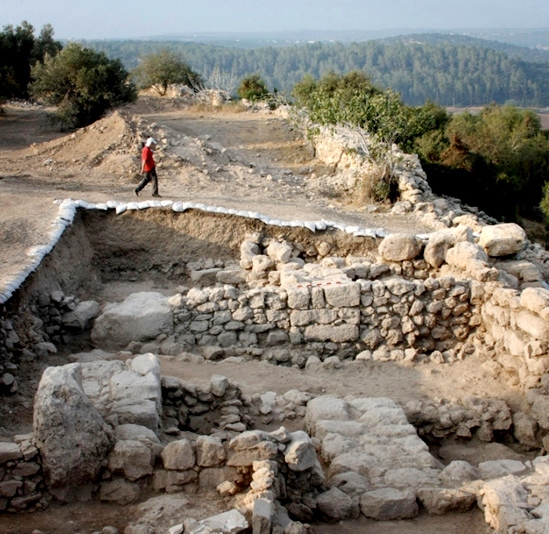 The ruins of the western gate of Shaaraim.