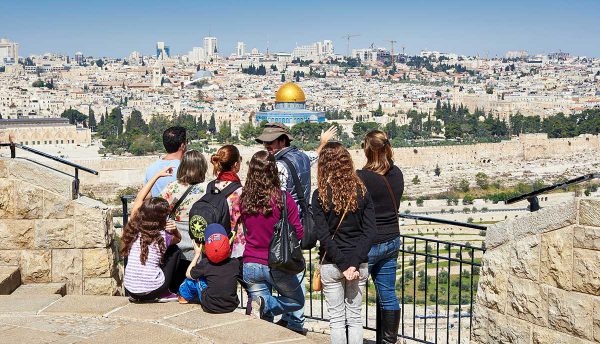 The second of the three Jewish Patriarchs was given the joyful name Yitzchak (יִצְחָק), which means He will laugh.

In English, we know him as Isaac.

How would you like to be called, “He will laugh”?

Someone with this name might be a fun person to have around. 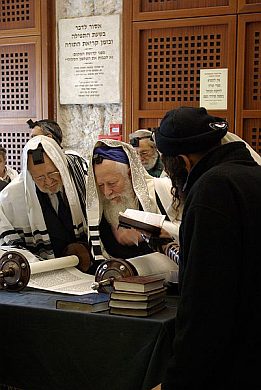 Orthodox Jewish men read from the Torah scroll in Jerusalem.

When we look beneath the surface of this name, however, we learn a significant lesson about the nature of God in our lives.

God keeps His promises no matter how incredible and impossible they may seem to us, so we should take everything He says seriously!

God wanted everyone for all ages to remember how all things are possible with our promise-keeping and merciful God, even if we laugh at what He has planned for us.

But who would laugh at God? 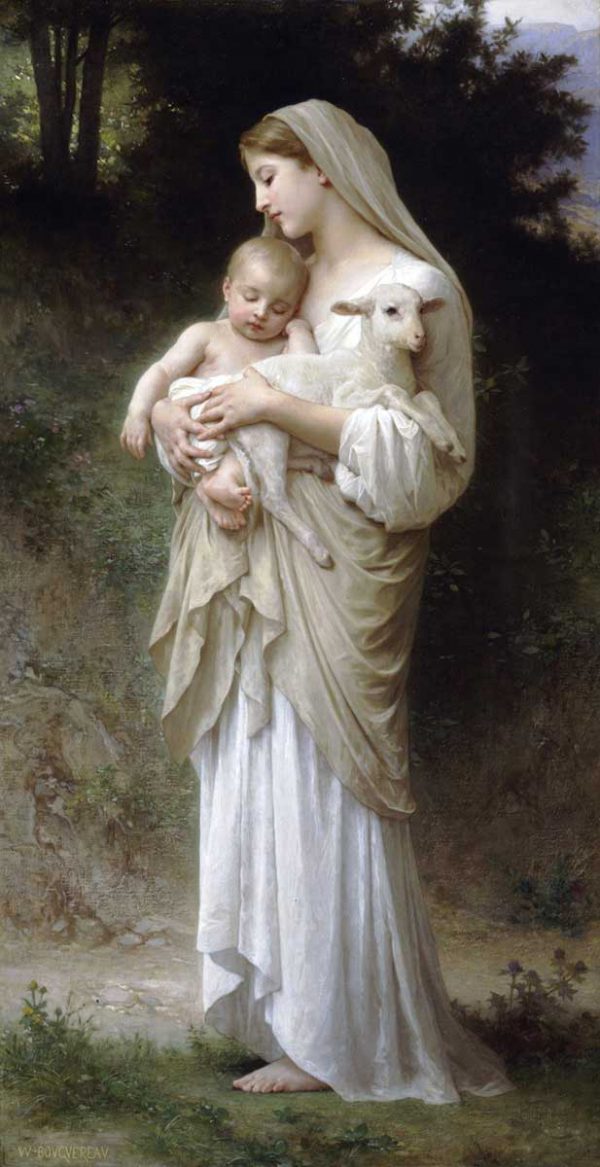 Abraham and Sarah could not have a son by natural means.  Isaac’s birth was a promised miracle.  Messiah’s birth to Miriam (Mary), by Divine conception, as an astounding miracle (Isaiah 7:14). (Illustration: L’Innocence, by William-Adolphe Bouguereau, 1825–1905)

Abraham fell face down and laughed when God told him, “I will bless [Sarah] and will surely give you a son by her.  I will bless her so that she will be the mother of nations; kings of peoples will come from her.”  (Genesis 17:15–18)

Just as Sarah and Abraham laughed at the idea that they could have a son in Sarah’s old age, today people laugh at the idea that God sent His only begotten Son who was promised from before the creation of the world to die as a substitute for our sins and be resurrected to life.  (Genesis 17:17, 18:12–15; John 3:16)

Nevertheless, these amazing events are foreshadowed in a significant slice of Isaac’s life.  It is a picture of what Messiah Yeshua would do for the world, if we open our eyes to fully see it.

The Binding of Isaac and Yeshua

Since God specifically chose Isaac to be the promised miracle son of Abraham and Sarah (and not Abraham’s first son, Ishmael), we might think He had incredible plans for Isaac that no one else could accomplish—and He did. 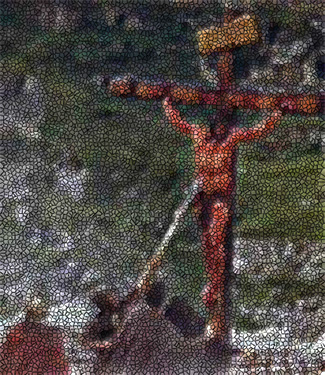 Yeshua was bound inside the gates of Jerusalem and executed outside the gates, both of which are on Mount Moriah.

But, then in a shocking, inconceivable command, God tells Abraham, “Take your son, your only son, whom you love—Isaac—and go to the region of Moriah.  Sacrifice him there as a burnt offering on a mountain I will show you.”  (Genesis 22:2)

This request is so incredible because Isaac is the only other human sacrifice (other than Yeshua) that God ever commanded.

In Jewish tradition, Isaac was a grown man in his 30s when his father bound him ready for sacrifice.  Yeshua was also in His 30s when He gave His life for us.

How could God ask anyone to sacrifice their son, since we read in Scripture that God abhors human sacrifice, and it never even entered His mind to ask the Israelites to do such a thing?  (Jeremiah 19:5) 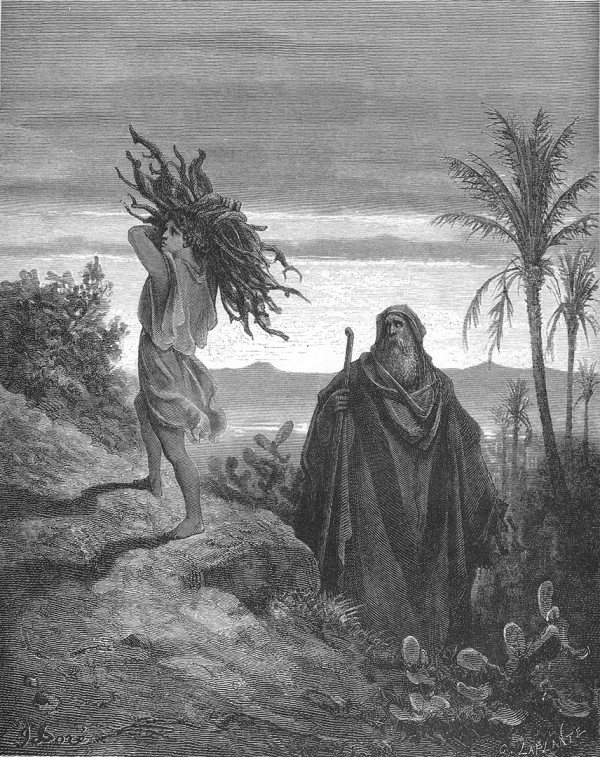 The Testing of Abraham’s Faith (1866), depicts Isaac carrying the wood for the sacrifice.

Isaac is also confused.  He asks his father, “The fire and wood are here . . . but where is the lamb for the burnt offering?”

As they reach Mount Moriah, Isaac lays down the wood he had been carrying for three days, and Abraham arranges it on an altar he built.   Then a stunning thing happens.

The grown man and son of Abraham allows his hands and feet to be bound on the wood that he carried to the altar, quietly awaiting his execution.

This is why this event is known in Hebrew as The Akedah הָעֲקֵידָה (The Binding).

According to 11th century Jewish commentator Rashi, the Hebrew word “akedah” refers to binding the hands and feet at the joints, which leave discernable marks.  (Shabbat 54a; Genesis 22:2 and 30:39)

Likewise, Roman soldiers bound Yeshua to the execution stake by driving nails through his hands and feet (some say the nails went through His wrist and ankles). 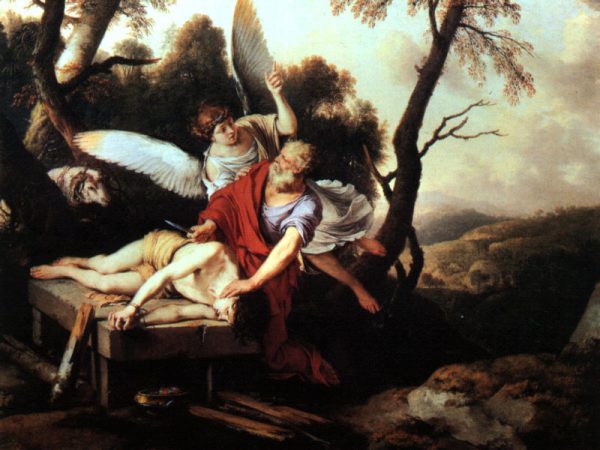 As Abraham holds the knife inches from Isaac’s neck, ”the angel of the Lord called out to him from heaven, “Abraham! Abraham! …  Do not do anything to him.  Now I know that you fear God, because you have not withheld from Me your son, your only son.”

“Abraham looked up and there in a thicket he saw a ram caught by its horns. He went over and took the ram and sacrificed it as a burnt offering instead of his son.”  (Genesis 22:11–13)

God wanted the Jewish Patriarchs (the fathers of the faith) and all generations after them to know that the life of an unblemished male lamb can substitute as a sacrifice for another life. 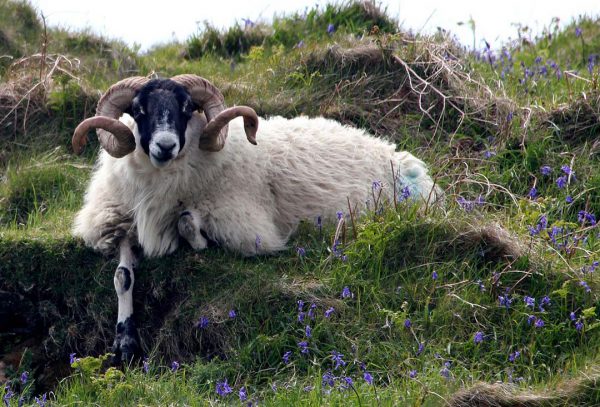 This male lamb appointed by God is so revered in Jewish thinking that ancient Jewish tradition says God created this ram at twilight on the sixth day of creation.  (Mishnah, Avot 5:6)

The Jewish apostle Peter understood the significance of that belief.  He explained to the Jewish people that Yeshua was “a lamb without blemish or defect.  He was chosen before the creation of the world.”  (1 Peter 1:19–20)

Moreover, Jewish tradition reveals that one of the ram’s horns will be blown to herald the coming of Mashiach — Messiah.  (Pirkei d’Rabbi Eliezer 31)

The prophets declared something similar about the coming of Messiah:  “In that day a great trumpet will sound”  (Isaiah 27:13), and “the Lord will be king over all the earth.”  (Zechariah 14:9). 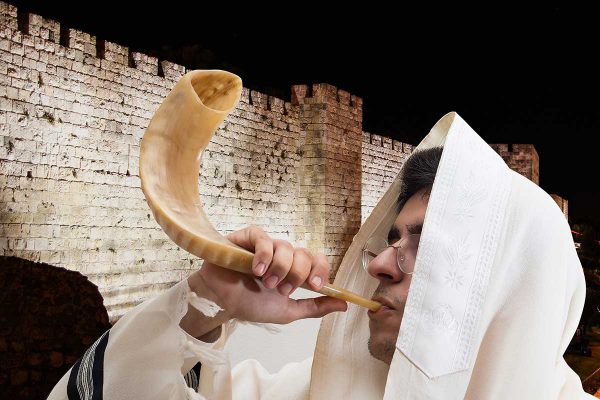 The binding of Isaac is read on Yom Teruah (The Day of the Trumpet Blasts), the first of the Fall Feasts that is expected to herald in the Messiah. On that day, a shofar (ram’s horn) will be blown, as this man is doing in Jerusalem.

The Resurrection and Ascension of Isaac and Yeshua

Jewish commentaries on Isaac’s near-death experience reveal how deeply rooted the desire for resurrection is in the Jewish soul.

“Abraham reasoned that God could even raise the dead, and so in a manner of speaking he did receive Isaac back from death,” writes the Jewish Rabbi Sha’ul (known as the Apostle Paul).  (Hebrews 11:19)

This idea that Abraham believed God would resurrect Isaac is not unique to Sha’ul (Paul).

Jewish sages have told several stories known as midrashim or parables over the centuries in which Isaac was expected to be resurrected, such as this one:

“When Isaac’s throat was about to be cut, he thought: ‘Into thy hands do I commit my spirit:  you have redeemed me, O LORD, God of Truth’ (Psalm 31:5).  He thought: ‘I shall not die, but I shall live; and I shall return, because God will not lie.  I am the son of the promise of the Eternal.”  (Midrash Beresheet)

Here again, we see a core Messianic connection between Isaac and Yeshua. 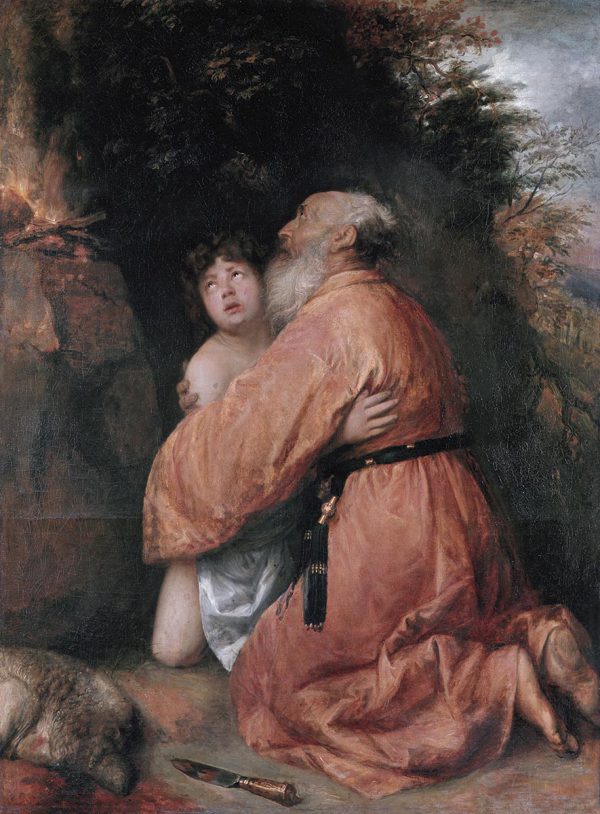 Because of Isaac’s figurative resurrection experience, the Jewish sages believe God will open the graves of the dead “so that he may set them on their feet in the age to come.”  (Mekilta Simeon)

What is the biblical foundation of these interpretations by the Jewish sages?

The Book of Daniel chapter 12 speaks about the resurrection in the last days when the Messiah comes.

“At that time Michael, the great prince who protects your people, will arise.  There will be a time of distress such as has not happened from the beginning of nations until then.  But at that time your people — everyone whose name is found written in the book — will be delivered.  Multitudes who sleep in the dust of the earth will awake [resurrect]:  some to eternal life, others to shame and eternal contempt.  (Daniel 12:1–2) 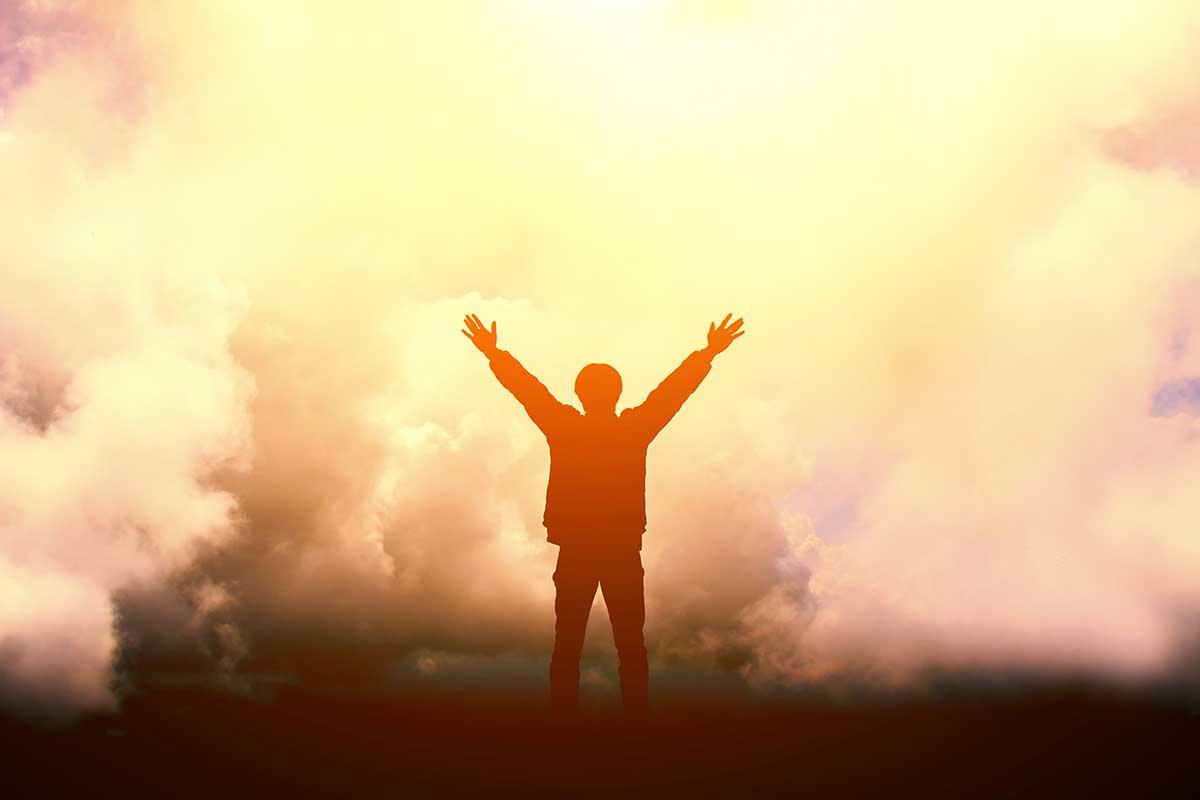 Not only do Jewish sages believe in the “resurrection of Isaac,” they also believe that he ascended!

After the sacrifice of the ram, one Jewish sage says that God brought Isaac “into the Garden of Eden [some unknown spiritual plane], and there he stayed three years.”  (Midrash Hagadol)

This entire account has made such an impact on the Jewish faith and longing for Messiah that the story of The Akedah in Genesis 22:1–19 is read every day during Jewish morning prayers.

Every morning, when Orthodox Jews pray from their siddur (Jewish prayer book), they read verses about the Akedah in order to remind God about how Abraham held back his compassion for his only son Isaac and was willing to kill him in order to do God’s will.  (Adapted from Siddur Ashkenaz) 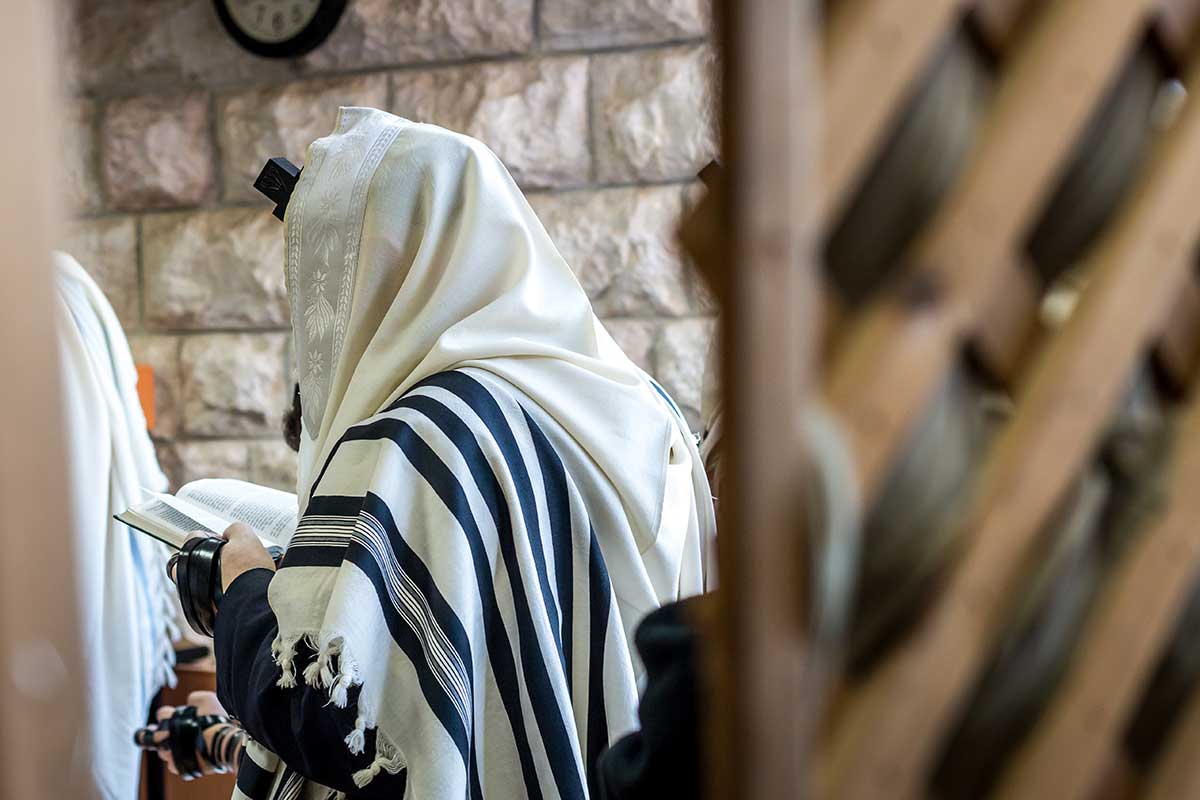 The sacrificial binding of Isaac as well as his figurative resurrection and ascension points to a future fulfillment when the Messiah would pay the wages of sin for mankind, resurrect from the grave, and ascend to His Father in heaven.

And as God is Messiah, He (YHVH) is coming again when “his feet will stand on the Mount of Olives, east of Jerusalem, and the Mount of Olives will be split in two from east to west, forming a great valley, with half of the mountain moving north and half moving south.”  (Zechariah 14:4)

Only those who believe in Messiah Yeshua’s righteous sacrifice and follow Him will be saved.

For this is why He told the disciples before ascending to heaven:

“Whoever believes and is baptized [water immersion] will be saved, but whoever does not believe will be condemned.”  (Mark 16:15–16)

And that is nothing to laugh about. 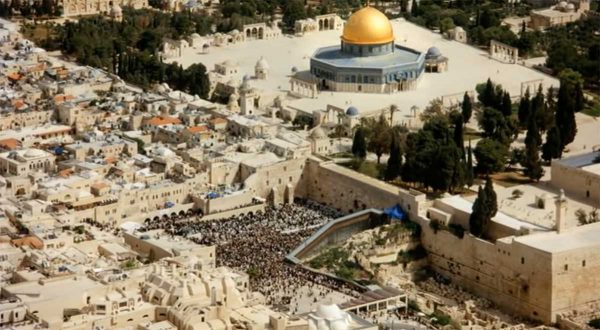 The Temple Mount is believed to be on ancient Mount Moriah, where God provided a ram for Abraham to sacrifice instead of Isaac.  “So Abraham called that place The Lord Will Provide.  And to this day it is said, ‘On the mountain of the Lord, it will be provided.’”  (Genesis 22:14)

Please support Bibles For Israel as our Messianic prophecy Bible helps both Jews and non-Jews discover the Messiah.