Trump, Jerusalem, and the War of Gog and Magog 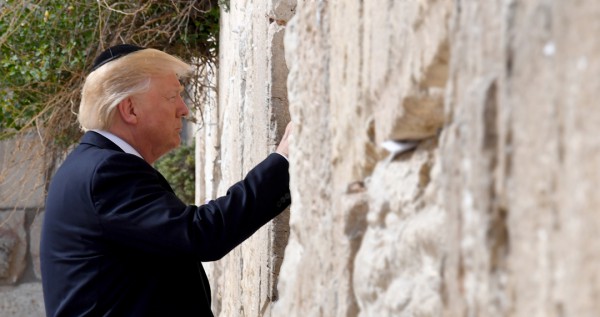 On May 22, 2017, US President Donald Trump became the first sitting US president to visit the Western (Wailing) Wall in Jerusalem.

“When I restore the fortunes of Judah and Jerusalem, I will gather all the nations and bring them down to the Valley of Jehoshaphat. And I will enter into judgment with them there, on behalf of my people and my heritage Israel, because they have scattered them among the nations and have divided up my land.” (Joel 3:1–2)

On December 6, 2017, US President Donald Trump recognized Jerusalem (with no defined boundaries) as Israel’s capital.

Since then, the Palestinians have retaliated with rockets from Gaza and on-going rioting throughout Israel.

It was just over two years ago, in September of 2015, that the United Nations gave international recognition to the State of Palestine by allowing it to fly its flag at UN headquarters and offices around the world. 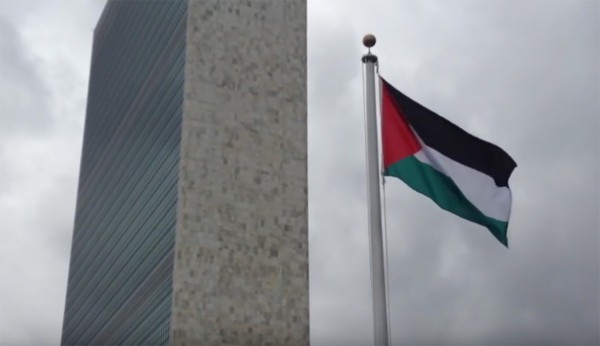 At that time, 136 of the 193 member states (70.5%) had already recognized a Palestinian state, at least symbolically.

And now, the Palestinian Authority (PA) President Mahmoud Abbas and the Organization of Islamic Cooperation (OIC), a coalition of 57 Arab nations, just declared that East Jerusalem is the capital of the State of Palestine.

That capital (according to Islamic boundaries) includes the Temple Mount—the Mount where Abraham bound Isaac (Genesis 22), where King Solomon built the First Temple (2 Chronicles 3–6), and where Yeshua (Jesus) proclaimed Himself to be the Messiah as He stood in Solomon’s Colonnade of the Second Temple during Hanukkah season (John 10:22–30). 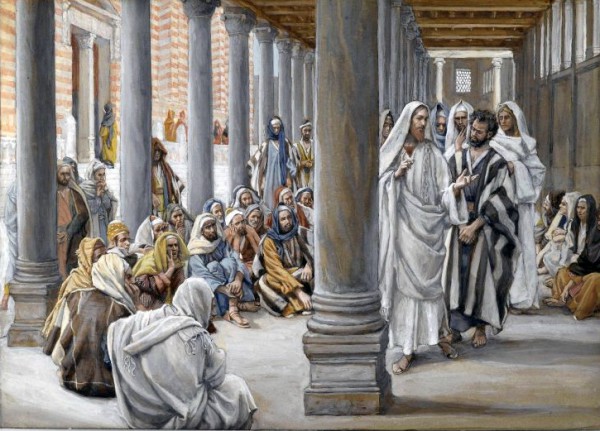 Almost 700 years after the destruction of the Second Jewish Temple by the Romans in AD 70, the Temple Mount became a holy site to Muslims and an abomination to the faith of the God of Abraham, Isaac, and Jacob.

In the late 7th century, Islamic leaders built the Dome of the Rock in the very place where the First and Second Temples once stood.

Inscribed on that building are the words:  “God has no Son.”

These words represent the spirit of the antichrist:

“Every spirit that does not confess Yeshua is not from God. And this is the spirit of the antichrist, of which you have heard that it is coming, and now it is already in the world.”  (1 John 4:3)

Yet, we know that this building will not stand forever.  It will someday be destroyed and a Third Temple will take its place (2 Thessalonians 2:3–4).

Let us now consider one way that scenario could happen in light of President Trump’s decision to appoint Jerusalem as Israel’s capital and to build a US embassy there. 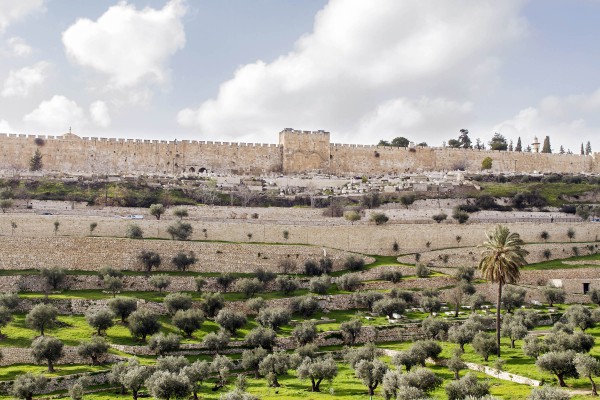 The Golden Gate to the Old City of Jerusalem is the closest gate to the Mount of Olives. It was sealed in the 16th century by the Ottomon Turks who also placed a Muslim cemetery in front of it, it is believed, to prevent the Messiah from entering. The original gate was destroyed by the Romans in AD 70 but would have been in a similar position. It was likely the gate that Yeshua entered as He rode on a donkey from Mount of Olives toward the Temple (Matthew 21:1–11; Zechariah 9:9).

The recent retaliatory decision to appoint East Jerusalem as the capital of the State of Palestine was announced on December 13 by Turkey’s President Recep Tayyip Erdogan.

Erdogan, who is the chairman of the 57-member Organization of Islamic Cooperation (OIC), issued a final statement of the Extraordinary Summit in Istanbul that said:

“… a comprehensive and just peace will be achieved only by ending the occupation [of Israel] and establishing the independent State of Palestine that has full sovereignty on the City of Al-Quds Ash-Sharif [Jerusalem] as its eternal capital.”

Therein lies the stumbling block to a truly just peace:  neither the State of Israel nor the State of Palestine will reach a peace agreement until they each claim eternal sovereign control over Jerusalem and the Temple Mount.

And therein lies the impetus for a prophesied war. 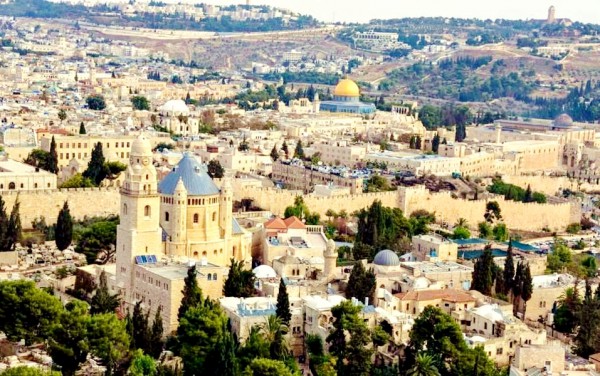 Aerial view of Jerusalem looking toward the Temple Mount and the
Mount of Olives.

As long as Israel remains connected to its 3,000-year-old Biblical roots, it will fight for Jerusalem because the mountain that Jerusalem is built on is not just any mountain, nor does it belong to just any god.

The God of Abraham, Isaac and Jacob said, “I have chosen Jerusalem that My name may be there.”  (2 Chronicles 6:6)

But today, God’s name is obliterated on the Temple Mount, and the Jewish People are not even allowed to pray there. 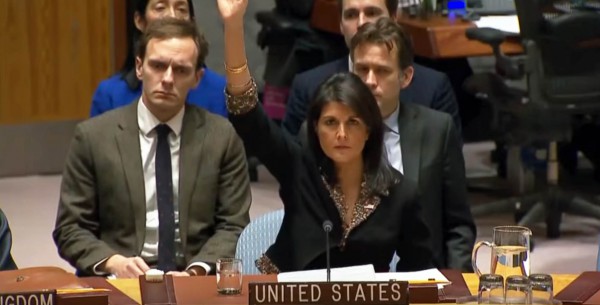 On December 18, 2017, US Ambassador to the United Nations Nikki Haley raised her hand to veto a resolution against President Trump’s decision to make Jerusalem the capital of Israel. (United Nations video capture)

Just last week, 14 of the 15 nations on the UN Security Council (all except the United States) voted yes on a resolution to keep the status of the holy city as “unresolved.”  The resolution also discouraged any nation from moving its embassy to Jerusalem.

But the United States Ambassador to the UN, Nikki Haley, vetoed it.

“The United States will not be told by any country where we can put our embassy.” Haley said.

Who are these 14 nations that have come against Israel and the United States? They, more or less, represent all of the nations in the world:

And these ten non-permanent members were elected for two-year terms:

To add salt to the wound of world aggression against Israel, in a non-binding decision, the UN General Assembly voted 128–9 with 35 abstentions in favor of a similar resolution.  But an abstention is almost the same as a non-YES vote.  So, we could say that 163 nations voted against Israel.

The nine nations that voted in favor of Israel (against the resolution) are Guatemala and Honduras (Central American countries that have had revival for Yeshua), the United States, Israel, and these five small Christian island nations: Togo, Micronesia, Nauru, Palau, and the Marshall Islands.

The world has spoken against Israel, the Apple of God’s Eye! 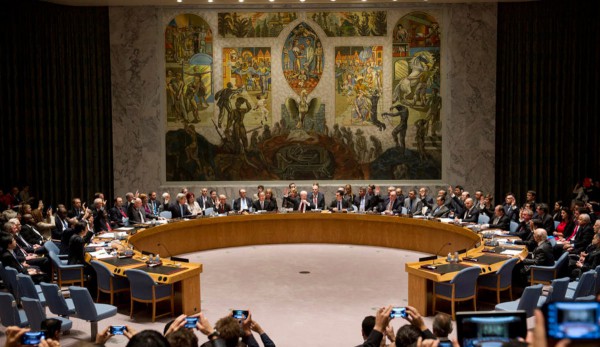 A Prophetic War in the Making

At the OIC summit, Erdogan said all countries who “value international law and fairness” should recognize “occupied Jerusalem as the capital of Palestine.”   And he affirmed that Islamic countries would “never give up” on this demand.

Likewise, PA President Abbas warned that “no peace or stability” could exist in the Middle East until Jerusalem is recognized as the capital of a Palestinian state.

It is not too far-fetched, then, to believe that the 57-member OIC could unite to declare war in order to make its claim over Jerusalem a reality.

This is the scenario presented in Psalm 83 as well as Ezekiel 38.

In Psalm 83, a 10-member coalition unites to destroy Israel “as a nation, so that Israel’s name is remembered no more.”  (v. 4)

In Ezekiel 38, a leader from the “far north” named Gog will unite many nations “against a land restored from war, a land where people were gathered from many nations on the mountains of Israel, which had long lain waste.”  (v. 8)

For centuries, Bible scholars have questioned if Gog is from Russia or Turkey. 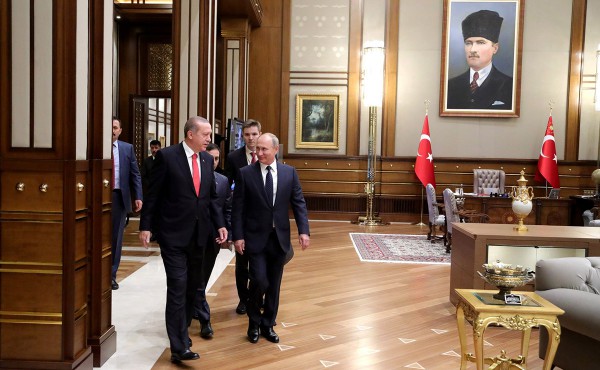 Many believe that Gog is a leader of Turkey.

Turkish President Erdogan has certainly declared a war of sorts in rallying all nations to recognize Jerusalem as the capital of Palestine.  In this effort, he has called Israel a “child murderer state” and a “terrorist.”

Erdogan has also stated that Turkey will open an embassy in East Jerusalem—the first country to pledge this!

Whoever will lead the war of Gog and Magog, we know that the invasion will be swift and severe, “advancing like a storm, … like a cloud covering the land.” (Ezekiel 38:9)

The devastation will likely level many structures in its path, perhaps even the Dome of the Rock itself.  Yet, this structure could also be removed much sooner through other forms of aggression.

Whenever that building’s lifespan ends, the storyline of a rebuilt Third Temple begins.  We leave the details of that plot for God to write. 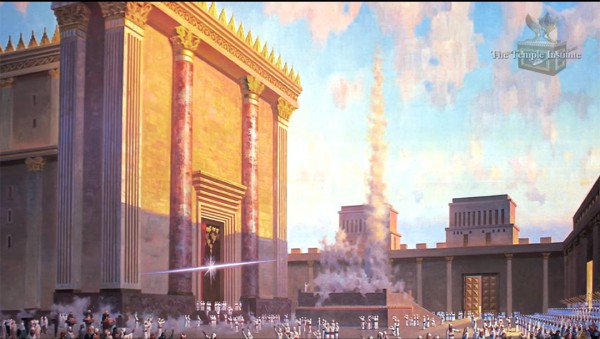 What we know for certain today is that President Trump has shaken the world with his decree.

Only God knows exactly how His Word in these end-times will be fulfilled; in the meantime, we are to stay watchful and prayerful as we look up and know that our redemption is at hand.

“When you see Jerusalem surrounded by armies, then know that its desolation has come near. … Now when these things begin to take place, straighten up and raise your heads, because your redemption is drawing near.”  (Luke 21:20–28)