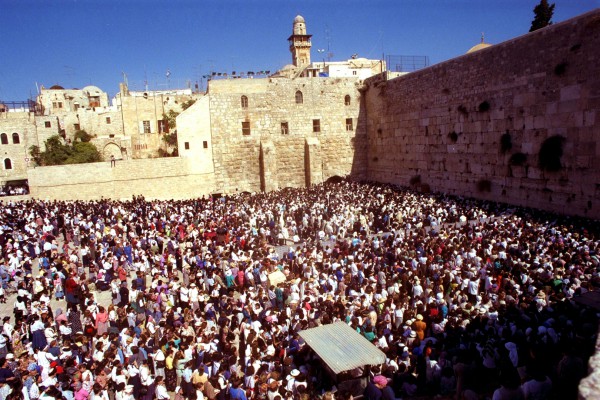 There were tens of thousands of Jews at the Wailing Wall this morning.

Early this morning, tens of thousands of Jewish people from here in Israel and around the world descended through the alley ways of the Old City of Jerusalem, walked down the ancient stairs and through tight security, before entering the open area which was quickly filling up before the Holiest place in Judaism – the Western (Wailing Wall).

For the past couple of days the Cohanim (Jewish Priests) have been preparing themselves to enter into a state of holiness to give the special blessings to the people of Israel this morning.  They were purified in the mikvah (water immersion pool) and then conducted other blessings of washing.

This morning wearing their tallit (prayer shawls), they presided for God over the people in the Holiest Place accessible to the Jewish People today – the Western Wall. 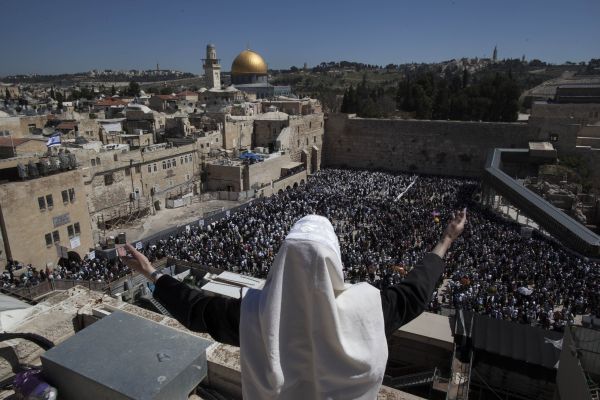 The excitement was growing as everyone had come here today during the Chol HaMoed (weekdays of the festival of Passover) to receive the Priestly Blessing!

The Hebrew blessing is given by the Cohanim (Cohens): Jewish males who are from the lineage of the Aaron who was the brother of Moses, and the first High Priest.

“The singing of the blessing was unbelievable,” Shuli an Orthodox Jew said.  “It was mamash (something so special), I felt HaShem and Shekinah in a powerful way (God and the Divine Presence of God).  We came here by bus with many others from Rehovot, about an hour away.  I would have come from the Golan or Eilat if I had to in order to receive these special blessings today and to come to Jerusalem during the Festival.  This city is unlike any other city in Israel, it is HaShem’s (God’s) City.”

“The sound of all the Cohanim singing together blessing the people of Israel sounded like the voice of angels and the voice of HaShem (God)” she continued.

Thousands of non-Jews were also among the crowd.

“I was so blessed to be here today to hear the Cohaim, I will never forget this,” said William from England.  “I am Christian and I was able to receive these blessings and share in the blessings of Israel.  I am truly privileged to be visiting Israel during Passover, and to see the Mount of Olives just on the other side over there, where Jesus (Yeshua) will return,” the Christian pilgrim said pointing towards the Mount of Olives.