Mount Hermon in the Golan Heights with the Hula Valley to the left.

President Trump sent shock waves through the Arab world when he recognized Israel’s sovereignty over the Golan Heights last week.

So, we want to help you understand the importance of the Golan in the land of Israel in Yeshua’s time, in prophecy, and in the world today. 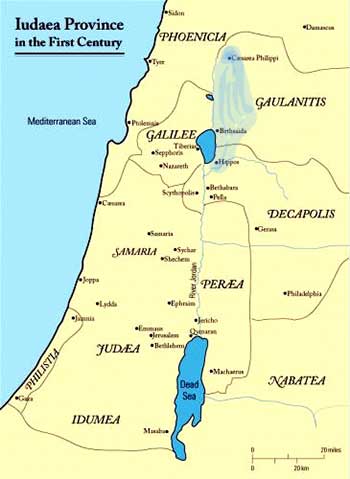 The blue-shaded area is roughly where the Golan Heights is located on this 1st century map. It includes Caesarea Philippi, where Yeshua asked Peter, “Who do you say I am?” Peter replied, “You are the Messiah.” (Mark 8:29)

The Golan Heights and Journeys of Yeshua

The united Roman Empire, who captured power in 63 BC made traveling through the area easy for both Gentiles and Jews.

Yeshua based His ministry in Capernaum on the west coast of the Sea of Galilee.  Though it’s called the sea of Kinneret (Yam Kinneret) in the Bible, it’s actually a lake.

He and the disciples often sailed to the other side of the sea (the east side) which is the Golan Heights.  There, He taught and demonstrated His Messiahship in powerful ways.

Sea of Galilee (Lake Kinneret) with the Golan Heights on the far side.

One time, while on His way to the other side, He calmed a great storm.  When He reached the shore, He cast a legion of demons out of a man, which fled into a herd of pigs  (Matthew 23–34).

Another time on the Golan side, Yeshua fed 5,000 people with five loaves of bread. After He dismissed the crowds,  “He went up on a mountainside by Himself to pray.  Later that night, He was there alone”  (Matthew 14:13–21, 23).

Yeshua not only spent time on the Golan side of the lake out of compassion for the people.  He was also fulfilling an 800-year old prophecy. 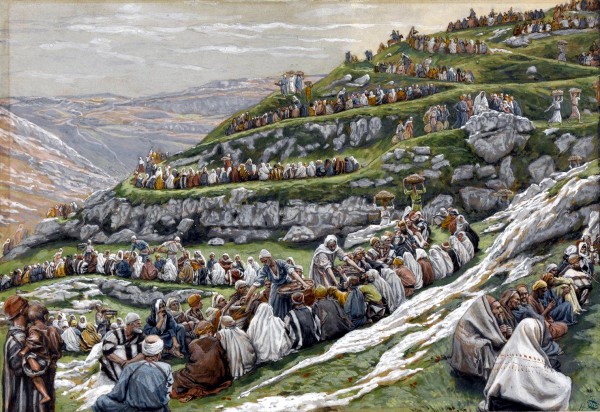 The Miracle of the Loaves and Fishes, by James Tissot

Fulfilled Prophecy “Beyond the Jordan”

While the Galilee was ravaged by the Assyrian invasion in the 8th century BC, God promised that at “a later time He will make glorious the way of the sea, the land beyond the Jordan, Galilee of the nations.”  (Isaiah 9:1; see also Matthew 4:13–16)

The Apostle Matthew records for us how this glory came to pass for the land beyond the Jordan:

“News about Him [Yeshua] spread all over Syria, and people brought to Him all who were ill with various diseases, those suffering severe pain, the demon-possessed, those having seizures, and the paralyzed; and he healed them.  Large crowds from Galilee, the Decapolis, Jerusalem, Judea and the region across the Jordan followed Him.”  (Matthew 4:24–25)

The word Galilee comes from the Hebrew word galil, which means circle or circuit.  The Galilee of the nations, therefore, likely referred to the variety of Gentiles populating the larger Galilee, including the Golan area, as a result of multiple empires controlling the region.

Moreover, one of three primary trade routes crossed through the upper Galilee and Golan on its way from Egypt to Syria. Known as the Via Maris (Way of the Sea in Latin), it would have brought many foreigners to the area, who were simply passing through.

Yeshua, in fact, told the people in His hometown of Nazareth, in a roundabout way, that He would be performing miracles for foreigners, just like Elisha and Elijah did (Luke 4:24–27). 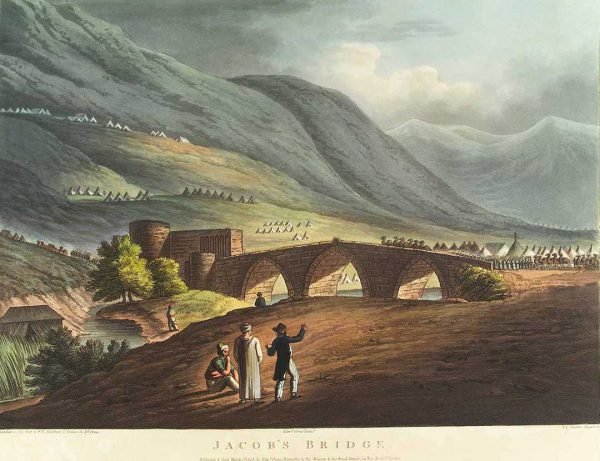 The Via Maris road included a bridge over the Jordan River that connected the Upper Galilee to the Golan.  Perhaps this is the road that Paul traveled on his way to Damascus when Yeshua changed the course of his life.  (Illustration: The Daughters of Jacob Bridge in 1799, seen from the north).

A Pattern of Battles over the Golan

God had given the city of Golan to the Israelites during their wilderness wanderings  (Deuteronomy 3:1–2).

Archaeologists have not yet identified where the city of Golan itself is, but some believe it could be about 17 miles east of the Sea of Galilee, perhaps on the border of Syria today.

Because of its high elevation and vantage points, whoever reigned over the Golan region occupied a strategic military advantage, so it underwent constant military struggles.  Ancient Israel, therefore, did not always stay in possession of it.

But as we will see, Israel needs to possess it today to protect its people and land. 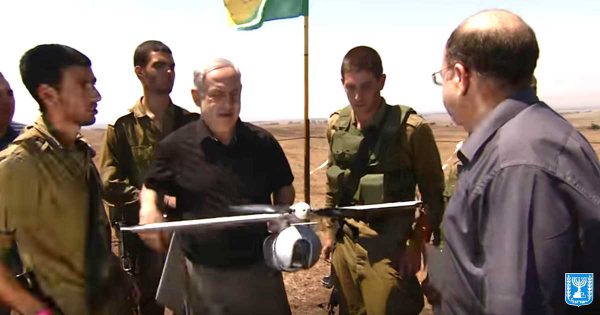 “The battles between the Aramaeans (of ancient Syria) and Israelites were governed by the same geopolitical considerations as today:  Whoever holds the high ground (the Golan) has a strategic advantage,”  said archeologist Moshe Kohavi from Tel Aviv University.

This is perhaps why King David married Maacah, the daughter of the ruler of the land of Gesher, the name given to the Golan area at the time (2 Samuel 3:3).  David may have made a peace treaty with the ruler and received Maachah in the agreement.

Even Arab Christians set up their own kingdom east of the Galilee as a client state of Rome with their capital in the Golan from AD 250 until the Islamic conquest in 636. 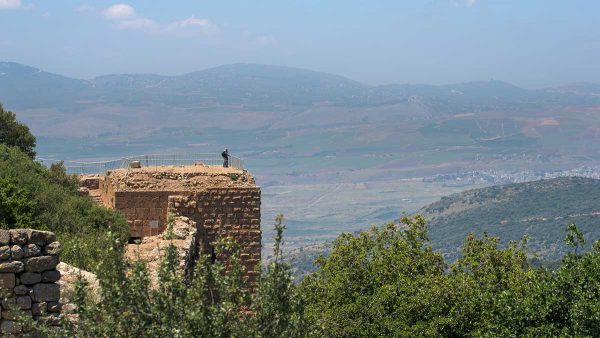 The “Castle of the Large Cliff” later called “Nimrod’s Fortress” was built on the southern slope of Mount Hermon around AD 1229 to guard a major access route to Damascus against advancing armies.

Various Jewish people and organizations purchased land in the Golan and tried to work it during the turn of the 20th century, but the Turks who controlled it since 1517 made life nearly impossible for Jews up to the time France gained control in 1918.

In 1946, France turned over the Golan Heights to the newly independent nation of Syria.  Tragically for Israel, Syria did not extend friendly hospitality.

Syria helped Fatah, the terrorist division of Yasser Arafat’s Palestinian Liberation Organization (PLO), by training them in the Golan Heights and allowing them to live there.

Since the Golan has an excellent vantage point over the Hula Valley below, Israeli civilians were at times killed by sniper fire from Syrian soldiers or Fatah terrorists. 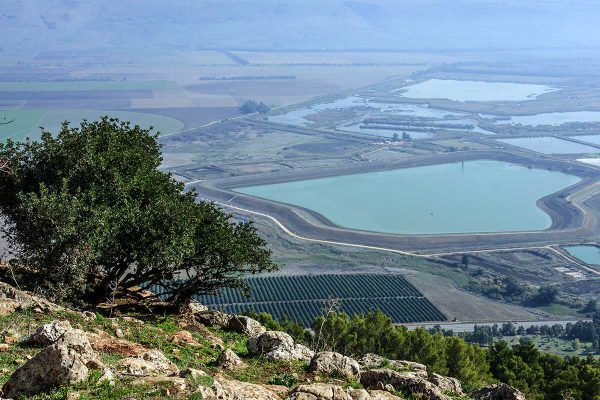 The Golan Heights has an excellent view of the Hula Valley below.

The United Nations never passed a resolution condemning the murders.  Instead, the UN has repeatedly condemned Israel for occupying the Golan.  (JVL)

Today, the terror organization Hezbollah has more soldiers, money and weapons than Fatah ever had, thanks in large part to Iran, which provides them annually with hundreds of millions of dollars!

Iran, which is developing nuclear weapons, also provides military training, fighters, rockets, and all types of weapons to Hezbollah terrorists who are stationed at the Israeli borders of Lebanon and Syria, eager to murder more of their Jewish neighbors than Fatah ever did. 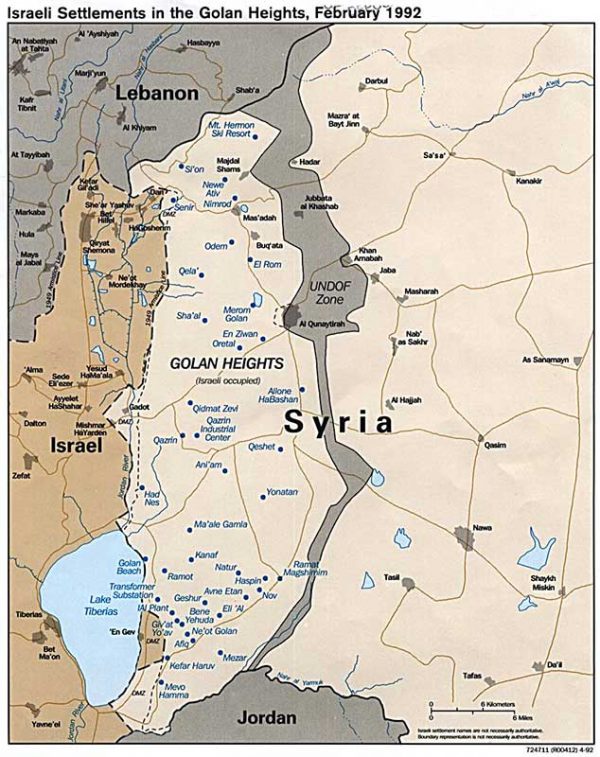 Syria and Israel signed a Disengagement Agreement in 1974 that created the gray buffer zone in the map above, which neither Israel nor Syria may occupy.

Their prize goal is to capture the high ground that the Golan generously provides, as Syria tried to do when they invaded the Golan Heights in 1973 on the holiest day of the year for Jews, Yom Kippur.

Israel, however, drove the Syrian forces out of the Golan within days.

If anyone thinks that giving the Golan Heights back to Syria (after Israel captured it in the Six Day War of 1967) is the right thing to do or that it will result in peace, one only needs to understand the ultimate goal of Syria, Iran, and Hezbollah who are at the border of the Golan this very moment — total destruction of Israel.

In fact, Syria and 15 other Muslim nations do not allow an Israeli Jew to enter their country.

Not only do these Muslim-controlled governments ban Israeli Jews from visiting their countries, they all wish for the destruction of Israel.

On the other hand, when Israel officially incorporated the Golan Heights into the territory and government of Israel in 1981, it offered the Druze living there Israeli citizenship!

Most took permanent residence status instead. Even so, they can travel freely, worship freely, and live in their own Druze-centered communities in Israel without threats of annihilation, unlike Christians in Syria.

About 22,000 Druze live in the Golan Heights.  The Druze are monotheists who practice a form of Islam that believes in reincarnation. It is a closed, secret religion.

The Golan Heights, which today is controlled by Israel, has about 40,000 residents, half of them are Druze and half Jewish.  The main town of Katrin has a population of 7,000 Jews.

While Golan residents must sometimes enter their safe rooms and bunkers to escape rocket fire from Syria, they enjoy the benefits of living in a beautifully lush region, with abundant wildlife, scenic beauty, and ample water supply.

In fact, Golan’s abundant rain and snowfall drain into many streams that flow into the Jordan River and provide Israel with one-third of its water. 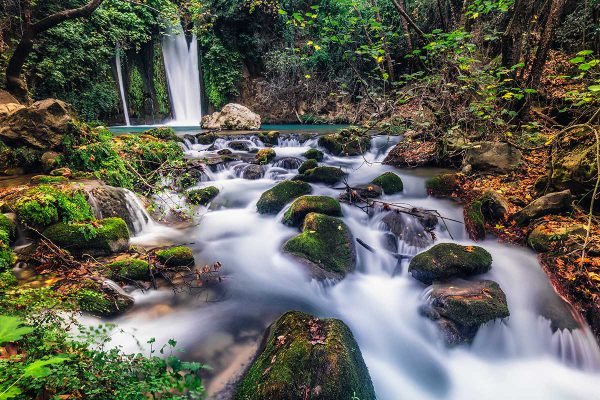 Several streams in the Golan, such as the Banias above are fed by the year-round snow-topped Mount Hermon at the northern border of the Golan near Lebanon.

The Golan is a weekend getaway destination for Israelis coming from the big cities of Jerusalem or Tel Aviv.

“I love going to the Golan, it’s getting into the fresh air, it’s quiet, has beautiful pastures, and it’s great for hiking,” said Yitzhak who lives near Tel Aviv.

He went on to say, “We must keep the Golan in order to protect all of Israel, and it is part of the Land that God to Abraham.”

Take a stand today for Israel’s security and for its Biblical ownership of the Golan Heights even as the world demands that the Jewish people living there give it up.