Early in the morning on Monday, a Jewish family’s home is destroyed by a Palestinian rocket, while in the afternoon President Trump acknowledges the Golan Heights as belonging to Israel.

The screeching, piercing sound of the sirens begin; that all too familiar, terrifying, eerie, high-pitched noise getting louder and louder made Nahama’s heart jump as she worried where her children and grandchildren were.

“The bomb shelter is over here!”  her grand-daughter Natalie shouts to her friends who are visiting from Jerusalem.

Kaboom!  Just a few kilometers away, just outside Tel Aviv in Mishmeret a Hamas rocket destroys a home.

“It’s a miracle no one was killed,”  a paramedic on the scene said.  (Ynet)

Hamas has been firing rockets into Israel and even damaging the homes of some of our Bibles for Israel’s ministry staff’s family since 2005!

That was the year Israel withdrew from the Gaza Strip in an effort to trade “land for peace.”

However, this strategy does not work and it never will.

In 1982, Israeli Prime Minister Begin gave back the Sinai to Egypt “for peace,” though afterwards, the Palestinians kept terrorizing and bombing Israel.

As mentioned above, two days ago, the Israel Defense Forces reported that a rocket traveling over 50 miles from southern Gaza landed directly on the Wolf’s family’s home.

The Wolf family entered their safe room, but did not have time to close the door.  Shrapnel blasted through the home, wounding two infants, a 12-year old girl, a sixty-year old woman, and three other adults. 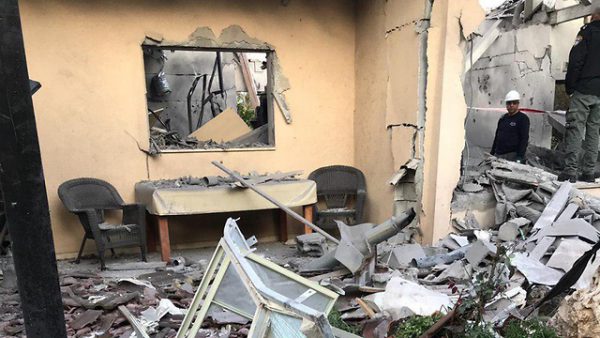 Homes, apartment buildings, and even office buildings in Israel have a safe room (in Hebrew, it is called a mamad).  In a home, it is usually one of the bedrooms that has reinforced walls and a heavy steel door (think of a submarine door).

For the last 71 years, the Jewish people in Israel have been threatened every day by its Arab neighbors with all types of firepower and rockets, including chemical and nuclear weapons.

It is because of this real and present danger that President Trump on Monday officially recognized the sovereign rule of Israel over the Golan Heights in northern Israel. 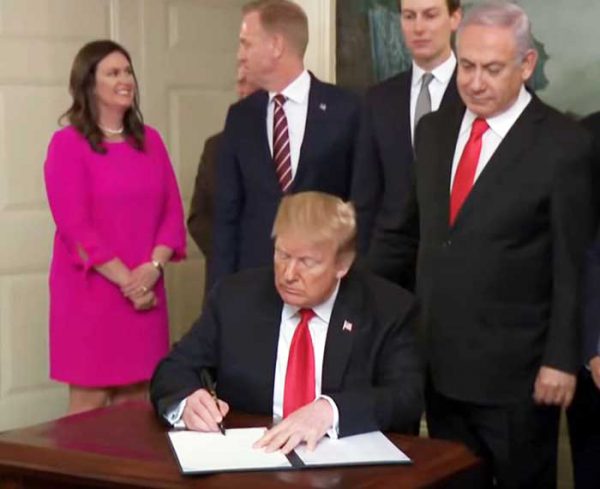 Some Israelis and Evangelical Christians are referring to President Trump as a modern-day King Cyrus, whom God called His anointed — in Hebrew mashiach (in English messiah).

In the Bible, each Jewish king was considered a “messiah” or “anointed one.”

Isaiah 45 gives us a prophecy about God’s anointed one [messiah], which refers to King Cyrus, who helped return the Jews from exile in Babylon to Israel.  He secured the provisions for them to rebuild Jerusalem and the Temple 2,500 years ago.

“‘I will raise up Cyrus in righteousness, and I will make all his ways straight.  He will rebuild My city and set My exiles free, but not for payment or reward,’ says the LORD of Hosts.”  (Isaiah 45:13)

And now, 2,500 years later, President Trump has been used by God to help re-establish the Land of Israel. 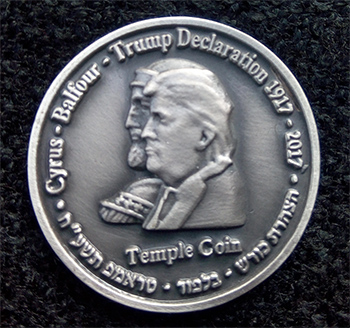 The first time God used President Trump was last spring when he recognized Jerusalem as the capital of Israel.  He then moved the Embassy from Tel Aviv to Jerusalem, which officially opened on May 14, 2018, 70 years after Israel’s birthday on May 14, 1948.

Two days ago, after the rocket attacks on Israel that destroyed the Wolf’s home, God used President Trump a second time when he signed an Executive Order that states, “The United States recognizes that the Golan Heights [area of Northern Israel] are part of the State of Israel.”

“After 52 years [since the 1967 war], it is time for the United States to fully recognize Israel’s Sovereignty over the Golan Heights, which is of critical strategic and security importance to the State of Israel and Regional Stability!”  President Trump tweeted last Thursday.

Thursday happened to be the joyful Jewish holiday of Purim, the day a plot to murder the Jews was thwarted, as recorded in the Book of Esther, a fitting day to bolster Israel’s security.

Israeli paratroopers study their positions from Mount Bental in the Golan Heights along the Israeli-Syrian border.

Israel captured the Golan region in a stunningly swift victory in the Six-Day War of 1967, which Trump called “a just war of self-defense.”

Israel then annexed the land to become part of Israel in 1981.

The United Nations quickly passed a resolution stating that Israel’s “decision to impose its laws, jurisdiction and administration in the occupied Syrian Golan Heights is null and void and without international legal effect.” 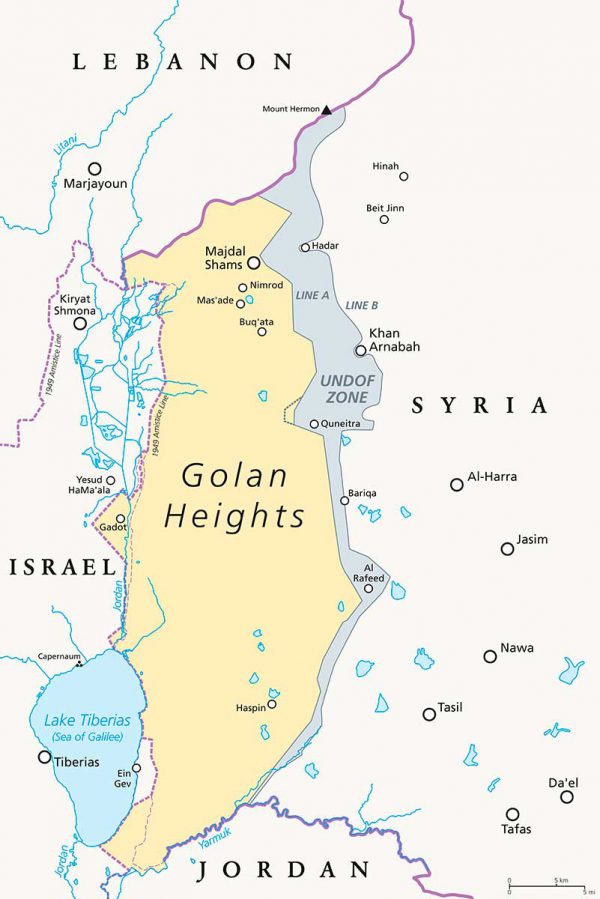 Today, the European Union and many nations have dismissed Trump’s decision and deny Israel’s claim to the Golan Heights while supporting the UN resolution.

However, from the point of view of Israel and the US, it’s a matter of security.

Syria:  Iranian and Hezbollah commanders along with Syrian reinforcements are in the Jezreel Valley in southern Syria to recapture its Golan border after ISIS had taken hold of it.  This puts three of Israel’s hottest enemies at Israel’s doorstep.

Lebanon:  This nation to the north of Israel is home to Hezbollah, a terror group with a larger army than Lebanon itself.

Jordan:  Israel’s eastern neighbor, Jordan, shares a peace treaty with Israel.  Though it’s not outwardly hostile like Syria, Iran, and Hezbollah, if it had an opportunity to seize Israel, it would.  In fact, from 1948 when Israel declared independence until 1967, Jordan controlled East Jerusalem and the Temple Mount, desecrating Jewish cemeteries and denying any Jewish entry to the holy sites. 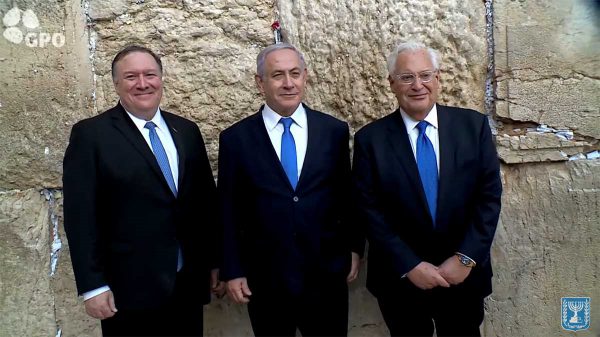 In the midst of these very real security challenges, US Secretary of State Mike Pompeo agreed with a CBN interviewer that President Trump just might be like Queen Esther, who was placed in a position of prominence to save the Jewish People from a plot of genocide.

“I am confident that God is at work here,” he said.

Nevertheless, someday soon, it will be these same neighboring nations that will invade Israel, led by either Russia or Turkey, in the War of Gog and Magog described in detail in Ezekiel chapters 38–39.

So let us continue to pray for the peace of Jerusalem — and all of Israel.  May those who do so be secure and prosper (Psalm 122:6).

Feature
Meet the God of All Comfort and Help

God is our Advocate, Comforter, and Intercessor, who sometimes helps us through Yeshua (Jesus) and His Spirit.