Abbas and Peres Pray for Peace on the Vatican Lawn

In an unprecedented interfaith prayer summit on a lawn of the Vatican, Israeli President Shimon Peres and Palestinian President Mahmoud Abbas met yesterday to pray for peace in the Middle East.

Before the prayer summit, Peres stated, “I have come to the Vatican from the State of Israel together with the representatives of the main monotheistic religions in Israel for an extraordinary event for peace.  This spiritual call is very important and influential, since the conflict [in the Middle East] is one that is of both a political and a religious nature.”  (JPost)

“Religious leaders exert influence all over the world, and tonight we will emphasize the State of Israel’s desire for peace,” the president said.  “I hope that this event will contribute to advancing peace between the parties and throughout the entire world.” 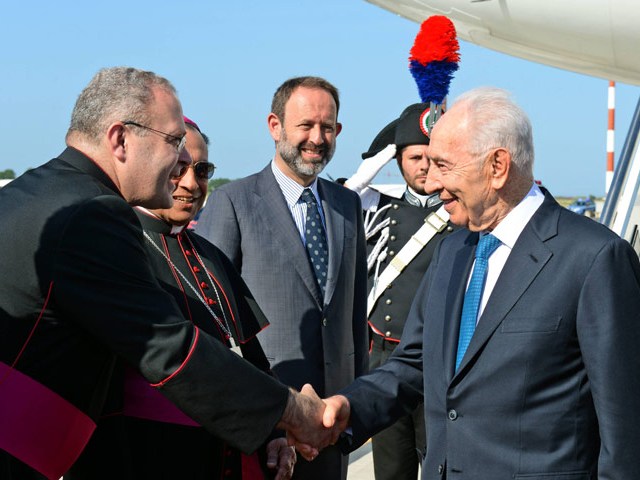 Israeli President Shimon Peres is welcomed on arrival to Rome.

During the prayer summit, Pope Francis emphasized the faith and courage of peacemakers.

“Your presence, dear Presidents, is a great sign of brotherhood which you offer as children of Abraham,” Pope Francis said.  “It is also a concrete expression of trust in God, the Lord of history, who today looks upon all of us as brothers and who desires to guide us in his ways.”

Pointing to the innocent victims of war, he encouraged them, saying, “Peacemaking calls for courage, much more so than warfare.  It calls for the courage to say yes to encounter and no to conflict: yes to dialogue and no to violence; yes to negotiations and no to hostilities; yes to respect for agreements and no to acts of provocation; yes to sincerity and no to duplicity.” 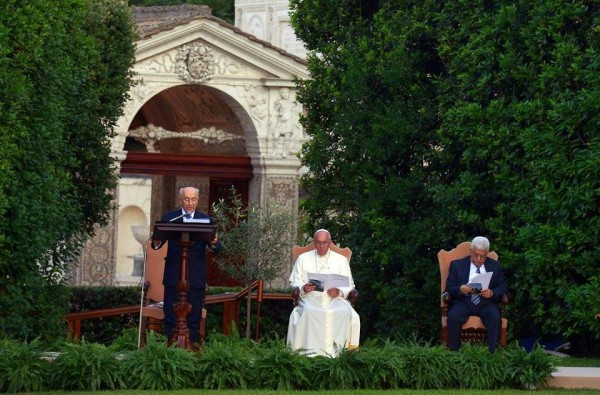 “Peace does not come easy,” Peres said during the summit.  “We must work with all our might until it is achieved, and achieved quickly.  Even if it calls for sacrifice and compromise.  The Palestinians are our neighbors.  We pray that soon we will live in mutual respect and good neighborliness.”

Quoting the Hebrew prophet Isaiah, Peres said we must have faith that peace is possible, as it is prophesied: “They will beat their swords into plowshares and their spears into pruning hooks.  Nation will not take up sword against nation, nor will they train for war anymore.”  (see Isaiah 2:4 and Micah 4:3)

“It is in our hands—together, now, Israelis and Palestinians—to realize the great vision and [make it a] reality,” he said.  “We can bring peace to our children and grandchildren.  This is our obligation, the sacred obligation of parents.” 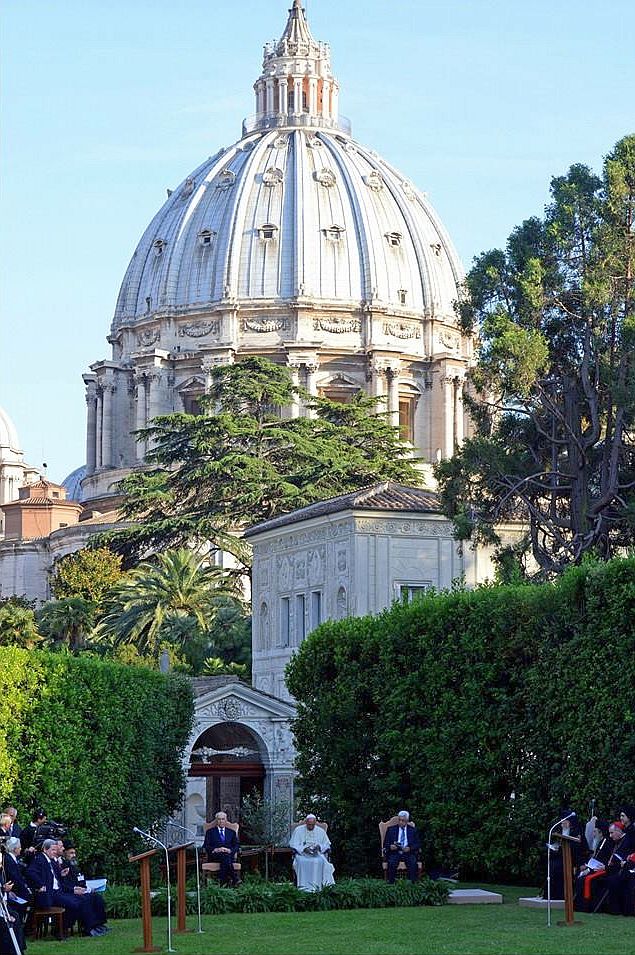 Mahmoud Abbas, speaking after Peres, stated emphatically that peace and reconciliation was “our goal.”

“Here we are, O God, inclined to peace.  Make firm our steps and crown our efforts and endeavors with success,” he prayed, appealing to God to “save our blessed city Jerusalem.”

“O Lord of Heaven and Earth, accept my prayer for the realization of truth, peace and justice in my country Palestine, the region, and the globe as a whole,” he said.

The two presidents met with Pope Francis against a background of growing tensions following the formation of the Palestinian Unity Government (PUG) on Monday and Israel’s announcement on Thursday of plans for the construction of 3,200 homes in the disputed territories.

It was the first time that Jewish, Christian and Islamic prayers were held together at the Vatican.

The presidents had been invited for the historic session by Pope Francis during his visit to Israel in May.

“Building peace is difficult, but living without peace is a constant torment,” the Pope said.