“You save the humble but bring low those whose eyes are haughty.”  (Psalm 18:27)

This past Monday in Athens, Palestinian Authority (PA) chair Mahmoud Abbas announced that passports from the PA would read “State of Palestine” by the end of 2016 — resurrecting the tenets of a plan the Fatah leader discarded in 2012.  (BIN)

“We are about to proceed to the passport replacement and the issuance of a new passport within one year or even less,” Abbas announced in Athens.  “We have already changed all documents by ministries and public services, and they now bear the name ‘State of Palestine.’  We no longer accept from anybody to use the name Palestinian Authority.”  (JPost)

In a joint press conference with Greek Prime Minister Alexis Tsipras, the PA leader also rejected any use of the name “Palestinian Authority.”

The next day the Greek parliament voted to recognize the “State of Palestine.”  While the vote was symbolic in nature, it was taken with Abbas in attendance. 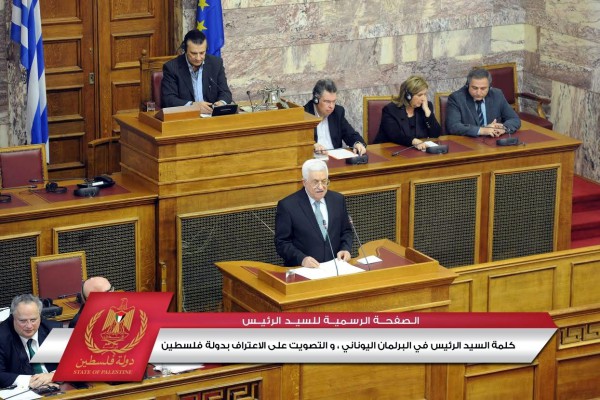 President Abbas addresses the Greek parliament, which voted unanimously in favor of recognizing the State of Palestine.

The government body’s Foreign Affairs and Defense Committee had called unanimously for the vote mid-month.  Tsipras stated to the press that the vote would be affirmed formally at an “appropriate” date to come and not earlier, to not “disturb good relations with Israel.”  (RT, JPost)

“We must underline the imperative need to begin a substantial, a credible peace process but with a clear political target,” Tsipras said.  “A process that will give again hope to the Palestinian people but also to the Israeli people, for a better future, for a peaceful coexistence of two peoples in the same region.”

Meanwhile, Abbas’ securing “non-member observer state” status at the United Nations in 2012 and his current plan to bypass negotiations and unilaterally declare statehood on passports have acted only to ice relations with Israel and block any dialogue toward peace.

Abbas’ original plan was to rename letterheads and other official documents including passports, vehicle and driver’s licenses, identity cards and registration documents following the PA’s nominal reclassification at the UN in 2012.

Abbas dropped the plan to place the State of Palestine on passports because Israel would not recognize them.  He understands that the move would be an obstacle to border crossings for the Arab Palestinians who work in Israel.  In 2014 that amounted to 92,000, twice the number from 2010.

Non-Israeli Arabs working in Israel receive more than twice the salary offered to them by Arab employers in Judea-Samaria — 186 shekels a day to the 87 shekels paid by PA businesses.  (Haaretz) 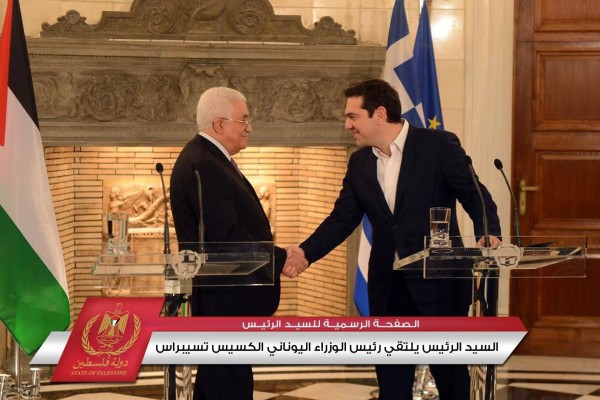 During his meeting with the Greek prime minister, Abbas also blamed Palestinian terrorism on Israeli “occupation.”  This follows his recent statements that claim Israel has been an occupying force since 1948, the year Israel became a nation again.

Deceptively comparing Israel to the great influx of refugee migrants from the Middle East into Greece, Abbas attempted to garner sympathy by creating a false relationship between Israel and the “security and identity problems” felt by Greek nationalists.

“Ending the occupation will put a halt to all of the problems associated with it, such as terrorism; and the end of terrorism will lead to finding solutions to problems arising from it like immigration,” he told Tsipras.  (BIN)

Despite bypassing negotiations with Israel and refusing to sit down with Israeli Prime Minister Benjamin Netanyahu, Abbas also falsely claimed that his leadership “hold[s] out our hand to the Israeli side to cooperate on finding a solution to the Palestinian problem.”

Tsipras visited Israel in late November, making promises to strengthen bilateral cooperation with Israel in agriculture, water technologies and the field of energy, before meeting Abbas in Ramallah, which was backed by his party’s long-time support of a Palestinian state.