Bookkeeper of Auschwitz Faces 300,000 Counts of Accessory to Murder

“The Lord is known by His acts of justice; the wicked are ensnared by the work of their hands.”  (Psalm 9:16)

Ten days after England saw its largest-ever meeting of Holocaust deniers, prosecutors in Germany began the three-month trial of former Auschwitz guard Oskar Groening, who confessed to “moral, not legal guilt” for his role in the Holocaust.

Known as the Bookkeeper of Auschwitz, the 93-year-old was charged on April 21 with 300,000 counts of accessory to murder in connection with the about 425,000 Hungarian Jews who were deported to the camp on 137 trains between May and July, 1944.  Of that number, 300,000 were sent straight from the trains to the gas chambers, after Groening took part in robbing them of their valuables.

A top speaker for “The London Forum” neo-Nazi event on April 11—California-based U.S. citizen Mark Weber—has said that the Holocaust is a religion with no historical underpinnings:  “No Hitler order, no budget, no gas chambers, no autopsies of gassed victims, no bones, no ashes, no skulls.”  (alphahistory) 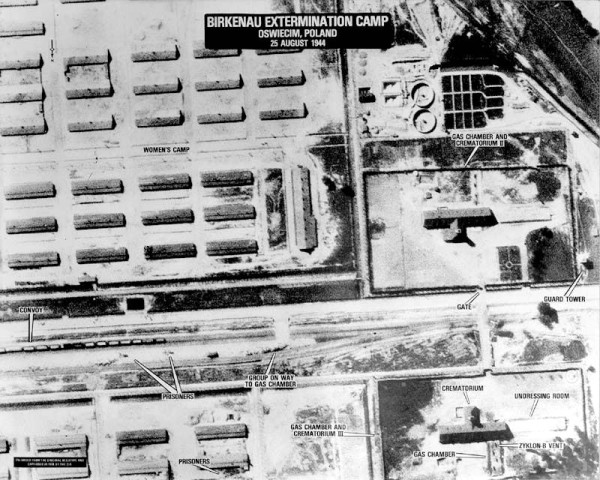 An aerial photo of Auschwitz-Birkenau taken by the South African air force.  It shows a recently arrived transport on the rail spur that terminated in the camp.  The selection process has been completed and those selected to be gassed are being led to Crematorium II, as shown by the open gate into the grounds of the complex.

In fact, in a BBC documentary 10 years ago, Groening said, “I see it as my task, now at my age, to face up to these things that I experienced and to oppose the Holocaust deniers who claim that Auschwitz never happened.  I want to tell those deniers: I have seen the gas chambers, I have seen the crematoria, I have seen the burning pits—and I want you to believe me that these atrocities happened.  I was there.”

Groening himself collected and tracked all of the new arrival’s money, jewels and other valuables and transported them to Berlin when the safe at the death camp filled up.

“They had diamonds and gold worth millions, and it was my duty to make sure all of it got to Berlin,” Groening said at trial.  “It was becoming harder and harder to suppress everything I saw.” 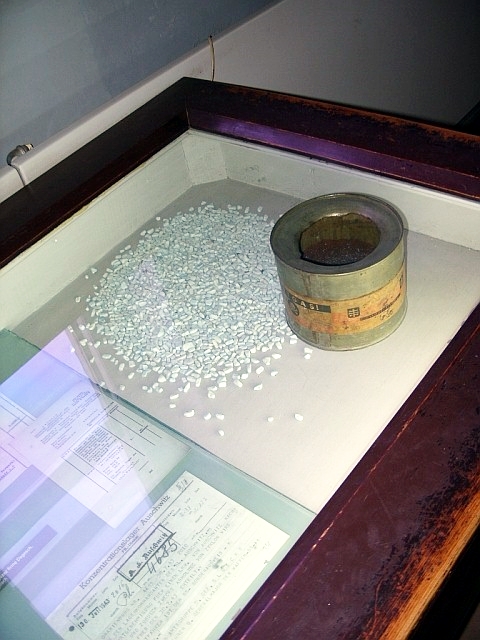 A can of Zyklon B with adsorbent granules and original signed documents detailing the ordering of Zyklon B as “materials for Jewish resettlement” are on display at the Auschwitz concentration camp museum.

Among other chilling facts in his testimony, Groening said he stood by while a guard filled the Auschwitz gas chamber with Zyklon B poison, the voices inside rising and then falling into silence.

“On one night in January 1943, I saw for the first time how the Jews were actually gassed,” he told the court, describing a gas chamber in a half-built farmyard near to the Auschwitz-Birkenau camp.  “We were searching the wood nearby for prisoners who had escaped; there were more than 100, and soon there were panic-filled cries as they were herded into the chamber and the door was shut.

“Then a sergeant with a gas mask went to a hole in the wall and from a tin shook Zyklon B gas pellets inside. In that moment, the cries of the people inside rose to a crescendo, a choir of madness.  These cries I have ringing in my ears to this day,” Groening said.  (Daily Mail)

Groening also described seeing another guard dash a baby’s head against a truck, displaying “casual acceptance of brutality,” according to McClatchy DC.

“I did not expect any Jews to survive Auschwitz,” Groening said on April 23, having admitted that he was told when he first came to Auschwitz-Birkenau that the camp was largely devoted to “discarding” Jews upon arrival after being seen unfit for slave labor.  “Down the years I have heard the cries of the dead in my dreams and in every waking moment.  I will never be free of them.”  (Daily Mail) 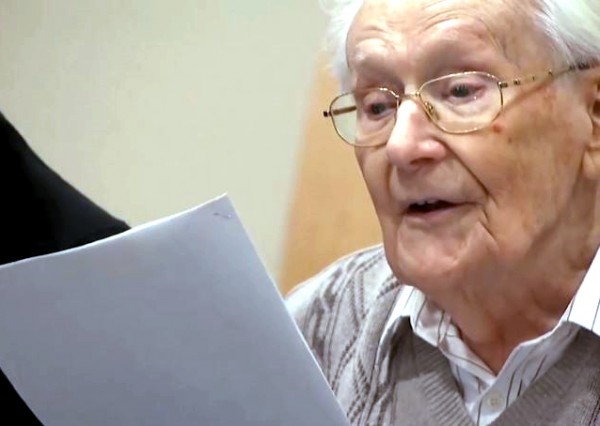 Oskar Groening reads a statement at the trial.  (YouTube capture)

As legal representation for many of the co-plaintiffs in the case, Thomas Walther told CBS News that he suspected Groening of withholding many details despite his testimony, alleging that “there is an ocean of truth, but with many islands of lies.”

With the trial underway in an old Knight’s Academy in Lueneburg, Germany, Groening impassively faced questioning on Thursday from one of Auschwitz’s remaining survivors, 81-year-old Eva Kor.  Kor was 10-years-old when she and her twin Miriam were marked for cruel medical experimentation by Dr. Josef Mengele.  (MSNBC)

“On alternate days—Tuesdays, Thursdays and Saturdays—we were brought to a lab, which I call the blood lab,” Kor told the court.  “They took blood from my left arm and gave me at least five injections into my right arm.  Those were the deadly ones.”

Kor stated 119 relatives were killed by the Nazis; and, despite Mengele declaring she had only two weeks to live, she held on.

Entering the courtroom on April 22, Groening initiated a handshake with Kor, and Kor accepted the goodwill gesture, later asking Groening on the stand, “How do you feel about my forgiving you and all the Nazis for what was done to me?”  The judge did not allow him to answer, per court rules.

Speaking of their conversation on her Facebook page, Kor writes,

“As I was talking to him, he grabbed me and gave me a kiss on the cheek.  Well I probably wouldn’t have gone that far, but I guess it is better than what he would have done to me 70 years ago.”  Kor explained, “His response to me is exactly what I was talking about when I said you cannot predict what will happen when someone from the victims’ side and someone from the perpetrators’ side meet in a spirit of humanity.”

Kor also wrote, “I told him that my forgiveness did not prevent me from accusing him nor from him taking responsibility for his actions.” 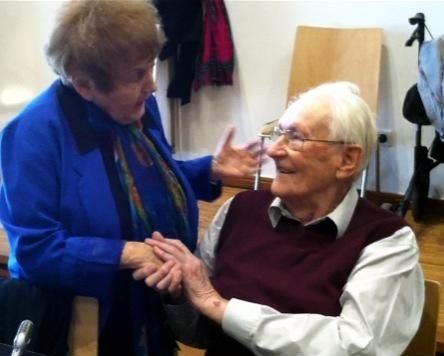 Eva Moses Kor posted on Twitter this photo of her meeting with Groening.  “I am sharing with you my face to face meeting with Oskar Groening the former Nazi guard.  Two old people reaching out,” she said.

When Groening was found in 1963, he claimed to just be “a cog in the machine,” avoiding charges when German officials agreed he was not a killer and chose not to press charges.

Now at trial, Groening’s presence on the unloading ramps of Auschwitz—watching as thousands were murdered after stealing their valuables for the Reich: jewelry, even gold from their teeth—will move the court to redefine the guilt of genocide complicity. 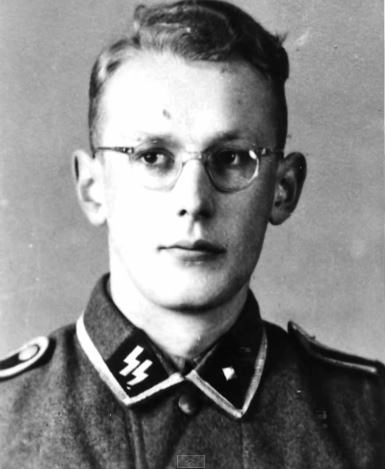 Oskar Groening, the bookkeeper of Auschwitz.

“It is obvious that hundreds or maybe thousands of individuals who have similar details for aiding and abetting have not been put on trial,” said Walther, adding that the trial will put on display Germany’s “full collective guilt.”  (McClatchy)

Only about 20 percent of 150,000 Nazi war criminals were ever put on trial; the millions of others who in effect served as accessories to Adolf Hitler’s “Final Solution” have slipped past the justice system.

“It is never too late to hold trials of Nazi perpetrators and accomplices.  There can be no statute of limitations on justice for the heinous crime of the Holocaust,” said Deidre Berger, Berlin office head of the American Jewish Committee.  “Even if someone is physically incapable for reasons of age and health of serving a sentence, moral justice is important for the victims but, above all, to reinforce core societal values.”

To prevent further erosion of these social values, Kor offers a solution:  “My idea is for people from the victims’ side and people from the perpetrators’ side to come together, face the truth, try to heal, and work together to prevent it from ever happening again.”  (Facebook)