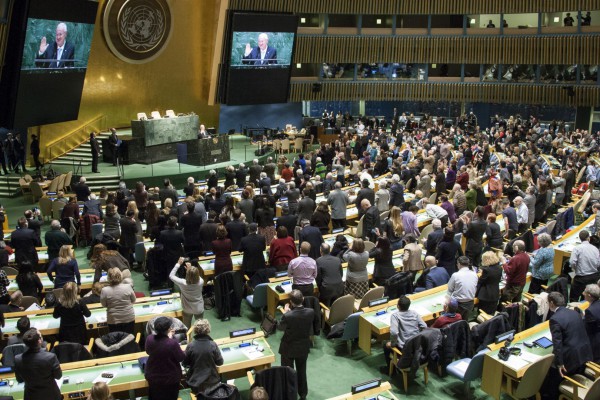 Israeli President Reuven Rivlin addresses the United Nations during a ceremony marking the International Day of Commemoration in Memory of the Victims of the Holocaust.  (UN Photo by Loey Felipe)

“Oh that my head was water, and my eyes a fountain of tears, that I might weep day and night for the slain of the daughter of my people!”  (Jeremiah 9:1)

On Wednesday, Israeli President Reuven Rivlin addressed the United Nations General Assembly as it marked the International Day of Commemoration in Memory of the Victims of the Holocaust, reminding the international body of its mission.

“On this day we once again remember the essence of the mission of this institution: all-out war against genocide,” he said.

He reminded the body that the UN was established on the ruins of World War II and that the call “Never again,” was “the very essence of this United Nations Organization; it is its mission; it is the primary and principal rationale for its existence.”

Throughout 2015, the United Nations is celebrating its 70th anniversary, being formed in 1945—just months after the Red Army liberated the Auschwitz-Birkenau death camp. 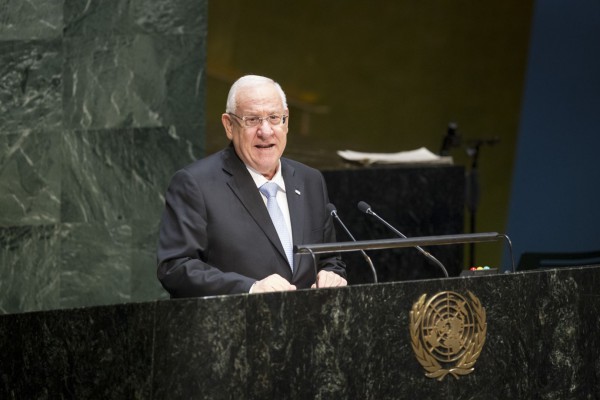 Israeli President Reuven Rivlin addresses the United Nation during a memorial ceremony to mark the International Day of Commemoration in Memory of the Victims of the Holocaust.  (UN Photo by Loey Felipe)

However, Rivlin questioned whether or not the body was succeeding in its fight against genocide:

“Are we shedding too many tears and taking too little action?”

Rivlin said, “I am afraid that the United Nations ‘Convention on the Prevention and Punishment of the Crime of Genocide’ that came into force as long as sixty-four years ago, has remained a merely symbolic document.”  (YNet) 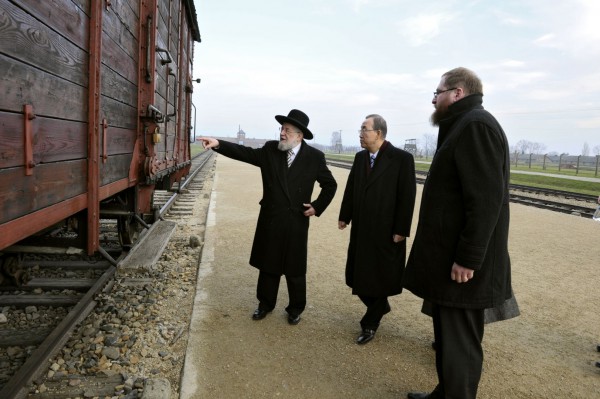 Secretary-General Ban Ki-moon who visited Auschwitz-Birkenau in November 2013, recognized that the UN was built on the ashes of the Holocaust and admitted that Jews are still being killed solely for being Jews.

“I saw the full machinery of murder: the railway platform where the infamous selections were made; the barracks that held Jews, Roma, Sinti, non-Jewish Poles, Soviet prisoners of war, dissidents, disabled persons and homosexuals; and finally the ovens where human beings were turned to ashes,” he said about his visit in 2013.

“I was especially moved by the displays of photographs and films of European Jewish life before tyranny took hold—family meals, weddings and other rituals, performances by the singers and actors who enlivened the cities in which they lived.  We can still feel the pain of all that was lost and destroyed in a frenzy of cruelty,” the Secretary-General added.

While the Secretary General called for working together to promote human rights, democratic freedoms, and universal values, he said that “we do not yet have an antidote to the poison that led to genocide 70 years ago.” 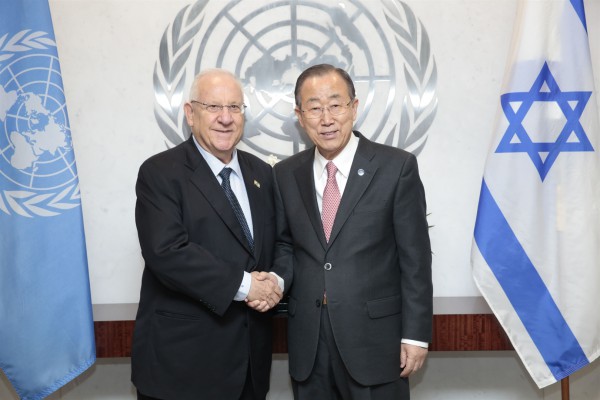 Rivlin, however, diagnosed the cause—evil—and its cure:

“Unless the moral fire burns within us, the lesson of the Holocaust will never be learned,” Rivlin said.  “Communities and nations will continue to be murdered, children, women, men and the elderly will continue to march to their death to the enlightened music of the ´orchestra of death,´ against the background of a cynical and apathetic world, and through no fault of their own.”

Rivlin seemed to blame the nations individually and as a world body for not having this moral fire; instead, they do a cost/benefit analysis when determining if they should get involved in stopping any moral war, even a genocide.

Identifying the root of genocide as evil, Rivlin said that “neither the West, nor the Christians nor the Jews are at war with Islam.”

“Right now, Islam encompasses, under its enormous wings, victims of persecution and of terrorism, while at the same time it also serves as the banner of the attackers,” Rivlin added.  (JTA) 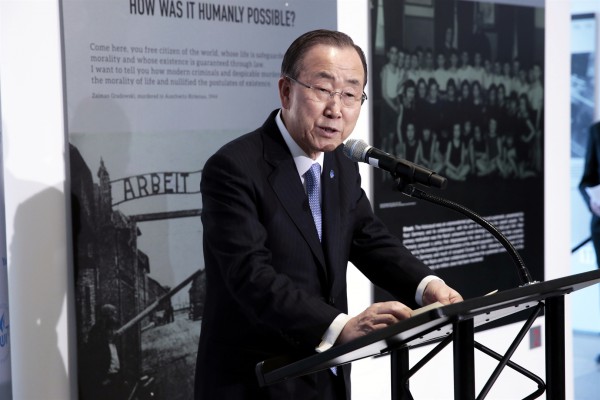 Rivlin called on the UN to set a red line beyond which acts of genocide are clearly defined and then acted upon because “humanitarian and moral consideration must take precedence over economic, political and other interests.”

Because of the Hezbollah attack last Wednesday that killed two Israeli soldiers and wounded several others, Rivlin cut short his trip so he could return home to visit the families of the fallen soldiers.

During his speech, he sent his condolences to the families of those killed and voiced his belief that Israel knows how to deal with the situation and to bring about calm.

“Blow a trumpet in Zion, and sound an alarm on My holy mountain!  Let all the inhabitants of the land tremble, for the Day of the Lord is coming; surely it is near.”  (Joel 2:1)