“Make every effort to add to your faith goodness; and to goodness, knowledge …”  (2 Peter 1:5)

Canadian Eitan Amos, 18, from Toronto, beat out 15 other finalists who answered tough questions posed by Israeli Prime Minister Benjamin Netanyahu and a panel of judges.  Amos is the first Canadian ever to win the contest.

During the awards presentation, Prime Minister Netanyahu emphasized the Bible’s importance saying that it is the “compass and map that help us navigate our way in a changing and unchanging reality.”

“The Tanach [Old Testament] has eternal significance for generations around the world but particularly for our nation.  It is our nation’s book, our national story,” he said.

“We are the people of the Book, we live in the land of the Book and this Book has sculpted our identity for thousands of years.” 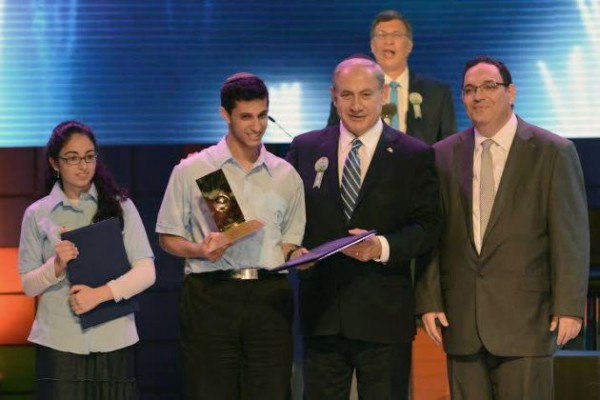 The 16 finalists remained after the eliminations last week.  They were among 75 competitors from 33 countries, including Australia, the US, Belgium, Brazil, Turkey, Portugal, France and Costa Rica.  Four contestants were from Israel.

“The State of Israel is the home of the entire Jewish People,” Education Minister Rabbi Shai Piron told the contestants last week.  “It is very moving to know that in the middle of the school year, 71 young people have left their homes in the Diaspora to come here to compete in a Bible quiz in Israel because they understand that Independence Day is not only Israelis’ holiday but a holiday for every Jew in the world.  Your coming to Israel is a victory for the spirit of the Jewish People, for the Bible.”

The Jewish Agency website explains that the contest encourages the study of the Bible among Jewish youth worldwide and describes the Bible as the basis for Israel’s existence as a nation and her right to the Land.

“The Bible is the cultural infrastructure for all Jews, regardless of stream, denomination or geographic location,” it states, adding that all Jewish education is based on it.