“In that day there will be an altar to the Lord in the heart of Egypt, and a monument to the Lord at its border. It will be a sign and witness to the Lord Almighty in the land of Egypt.”  (Isaiah 19:19–20)

Shoukry’s arrival marked the first of an Egyptian official to Israel since 2007 and has been seen by analysts as a sign of warming relations between Israel and Egypt.  Shoukry described his visit in a press conference with Netanyahu on Sunday as a “crucial and challenging juncture for the Middle East.” 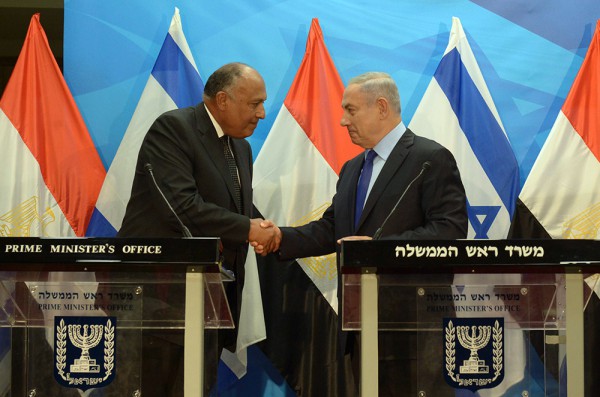 “My visit to Israel today is a continuation of Egypt’s longstanding sense of responsibility towards peace for itself and all the peoples of the region, particularly the Palestinian and Israeli peoples, who have suffered many decades due to the perpetuation of the conflict between them,” Shoukry said at a press conference on Sunday.

According to Al Arabiya, in a report last Monday, Netanyahu accepted an invitation by the Egyptians to meet with Egyptian President Abdel Fattah el-Sisi and Palestinian Authority Chairman Mahmoud Abbas.

Netanyahu’s office did not confirm whether an Egyptian peace summit had indeed been discussed by the ministers, but said in a statement, “Whether this matter was discussed or not, Israel always says that it’s ready for unconditional, direct and bilateral negotiations.”  (Israel HaYom)

The pressure is now on Abbas to accept Egypt’s invitation as well.

Netanyahu stated at the joint press conference with Shoukry on Sunday, “I welcome President el-Sisi’s recent offer of Egyptian leadership in efforts to advance peace with the Palestinians.”

He added, “Today I call again on the Palestinians to follow the greatest example of Egypt and Jorden and join us for direct negotiations.  This is the only way we can address all the outstanding problems between us, and turn the vision of peace based on two states for two peoples into a reality.”

On Monday, Netanyahu said, “I spoke with Shoukry about an array of issues of paramount importance to Israel, as well as other regional issues, such as the promotion of peace and stability, including peace between us and the Palestinians and other countries.  I think that cooperation with Egypt is a security and international asset for Israel.”

At Shoukry’s visit on Sunday, a picture of the two leaders was posted to Netanyahu’s Twitter account with the caption, “Tonight Sara & I hosted Egyptian FM Sameh Shoukry in our Jerusalem home.  We made time to watch the #Euro2016Final.” 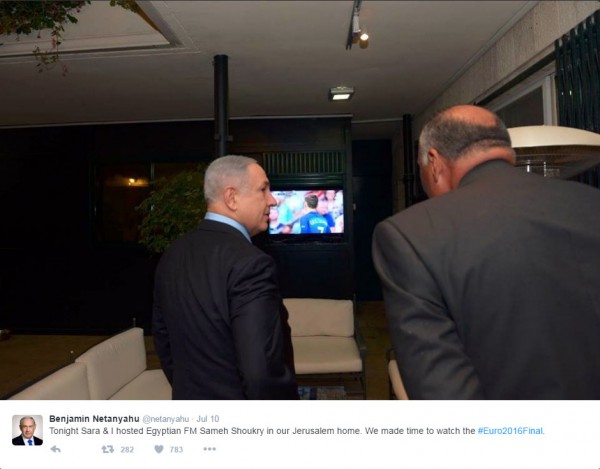 Egyptian Foreign Ministry spokesman Ahmed Aby Zayed scaled back the impression of close camaraderie by saying, “They did not watch the game together.  They simply walked by a TV and Netanyahu wanted to see the score. … The Egyptian foreign minister doesn’t watch soccer games during a formal and important visit such as this.”

While formal relations are strengthening between Egypt and Israel, on the ground in Egypt, public sentiment toward the country’s Jewish neighbor is considered icy and antagonistic.  An editor at Egyptian newspaper Al-Shorouk remarked that the picture of the two leaders in front of the game provoked feelings of “shame, sorrow and a sense of defeatism and everything that could be used to describe frustration and pain.”

The editor, Imad ad-Din Hussein, then accused “this dastardly country,” Israel, as “the main reason for most disasters in Egypt.” 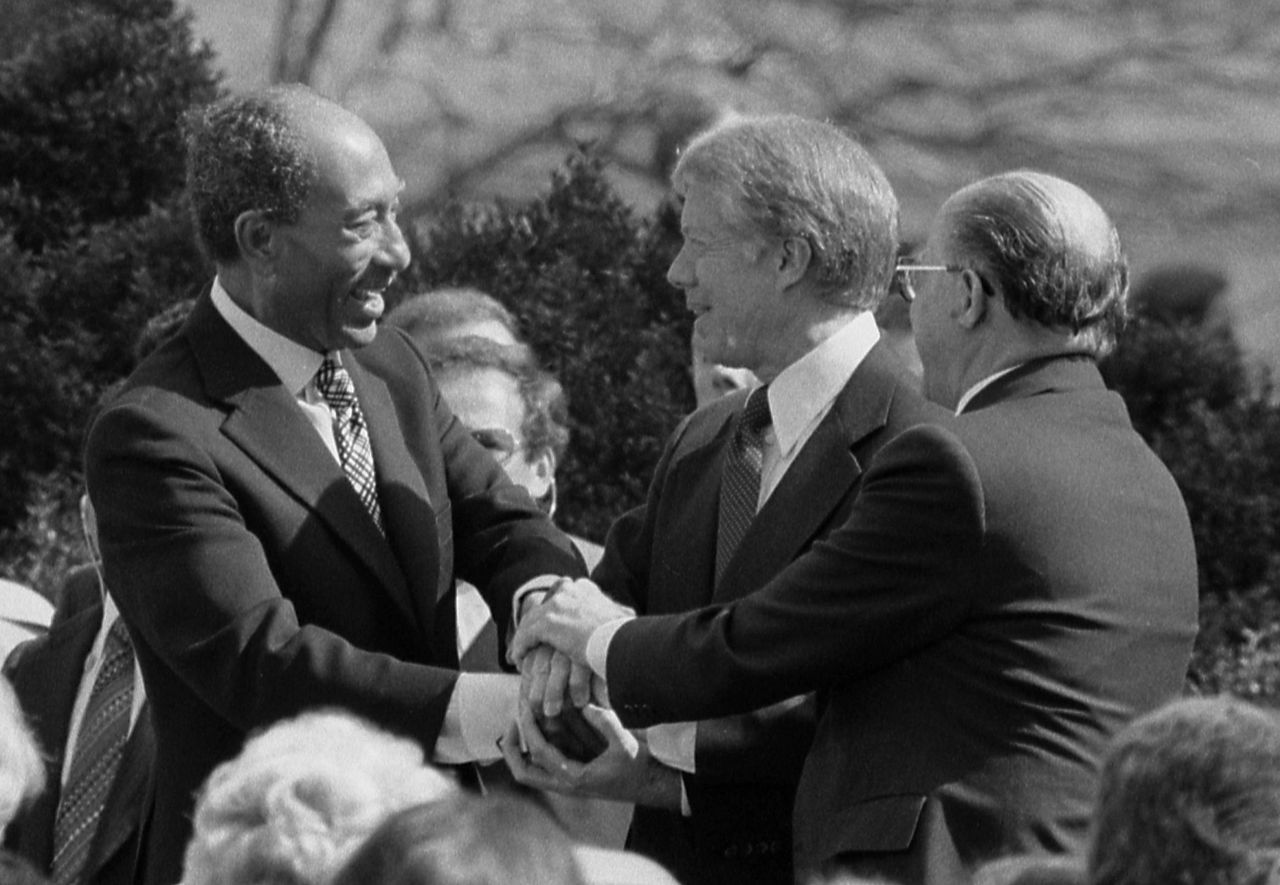 President Jimmy Carter shakes hands with Egyptian President Anwar Sadat and Israeli Prime Minister Menachem Begin at the signing of the Egyptian-Israeli Peace Treaty on the grounds of the White House.

Nevertheless, as Netanyahu said in a joint press conference with Shoukry on Sunday, “Our two nations have been at peace since we concluded our historic peace treaty 37 years ago, and the peace treaty between Israel and Egypt and between Israel and Jordan are the cornerstones of stability in the region, and are critical assets for our countries.  They are also the cornerstones of a broader regional peace and a broader stability that we hope to achieve.”

However, Shoukry warned that “the situation of the Middle East is becoming ever more volatile and dangerous, particularly as the phenomena of terrorism continues to grow and proliferate.”

The foreign minister added that terrorism represents “an existential threat to the peoples of the region and the world at large.  No person, group or people are exempt; none are immune from this threat.”

“I would like to assure that Egypt’s commitment to supporting a just, comprehensive and sustainable resolution for the Palestinian-Israeli conflict and to supporting peace and security in the Middle East is a steadfast and unwavering commitment,” he added.  “The Egyptian leadership is serious in its determination to provide all possible forms of support in order to achieve this noble goal.”

Echoing the sentiments of the European Union efforts to broker peace, the foreign minister said that he hopes Egypt will act as a “bridge of trust” in resuming PA and Israeli peace talks.