“With one mind they plot together; they form an alliance against you—the tents of Edom and the Ishmaelites…”  (Psalm 83:5–6)

A unity government between the two main Palestinian factions, Fatah and Hamas, was sworn in today (June 2) in Ramallah, the administrative capital.

It ends seven years of bitter rivalry between the two organizations which started close to the blood moon year of 2007.  This year, they came together after the first blood moon this year on Passover.  That blood moon is the first of four in a series called a tetrad, all of which will coincide with Passover and Sukkot in 2014 and 2015.

This is no coincidence!  These are signs in the heavens that the Lord has placed for us to know that we are in the end of days.

At a brief ceremony attended by Abbas and Hamdallah, Abbas announced, “This letter designates Dr. Rami Hamdallah to form a new transitional government.  I wish him luck in this difficult task which he will undertake.” 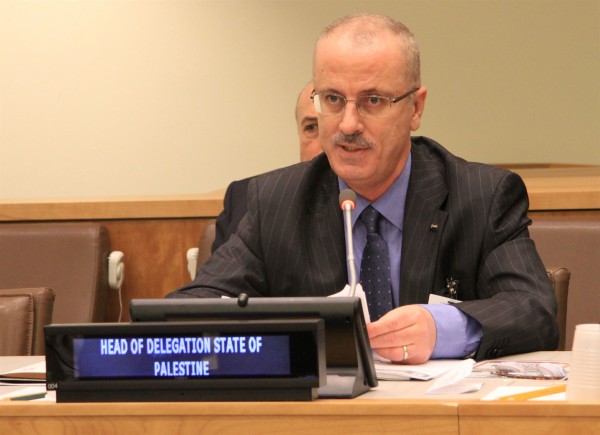 Although, the inauguration of the new unity government on Friday was held up over disagreement regarding the appointment of various ministers, most of the differences have been resolved and the ceremony was held today at 1 p.m.

It has now been agreed that al-Maliki will stay on as foreign minister.

While the new government with the backing of Hamas will be popular among Palestinians, it is faced with challenges from many directions, including the revival of the peace process, which came to a halt with the announcement of the unity deal, and also with donations of foreign aid. 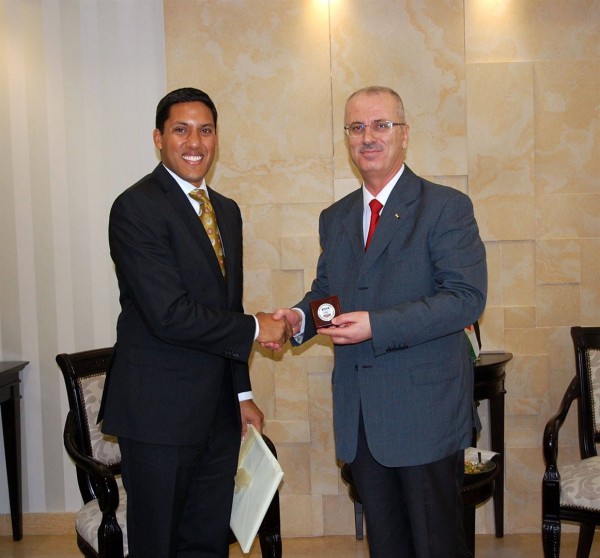 Israeli Prime Minister Benjamin Netanyahu has stated that it will not negotiate with any government that includes Hamas, a recognized terrorist organization that refuses to recognize the Jewish state.

The United States is among those countries which recognize Hamas as a terrorist group.

Gaza’s Hamas Prime Minister Ismail Haniyeh has made it clear that the formation of a government with Fatah will not stop his party’s “resistance” against Israel, which he says will continue along with the new governmental arrangement.  He told reporters that the resistance that led to the liberation of Gaza will also liberate the “West Bank, Jerusalem, and the rest of the land.”  (JPost)

Israel has warned that it would hold Palestinian Authority President Mahmoud Abbas “accountable” for Hamas terrorism in a unity government.

“He [Abbas] will be accountable for and responsible for [Hamas]’s violence against Israel,” an official in Jerusalem said. 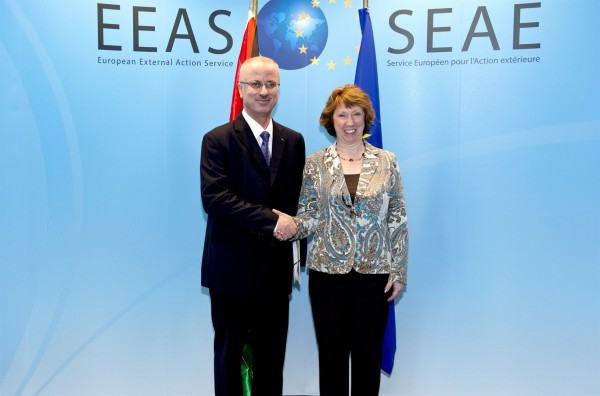 Palestine Prime Minister Rami Hamdallah meets Catherine Ashton in September 2013 when the EU announced an assistance package for development in Palestine during Hamdallah’s visit to Brussels.

Additionally, many nations might withhold aid to avoid being seen as funding terrorism.

Such foreign aid donors as the US, EU and the UK will question funding a threat to Israelis.  (The Guardian)

UK aid will be affected if any Hamas security forces, as demanded, are put on the Palestinian Authority government payroll.

Meanwhile, WAFA, the official Palestinian News Agency, said Thursday that US President Barack Obama reaffirmed US commitment to a Palestinian state in a letter to Abbas.

“As I emphasized during our meeting, the United States remains deeply committed to a negotiated outcome between Palestinians and Israelis that results in an independent, viable and contiguous Palestinian state living in peace alongside the state of Israel,” Obama wrote.

“I am hopeful we can continue to work closely together to achieve this goal and further strengthen the bonds between our two people,” the letter said.  (JPost)