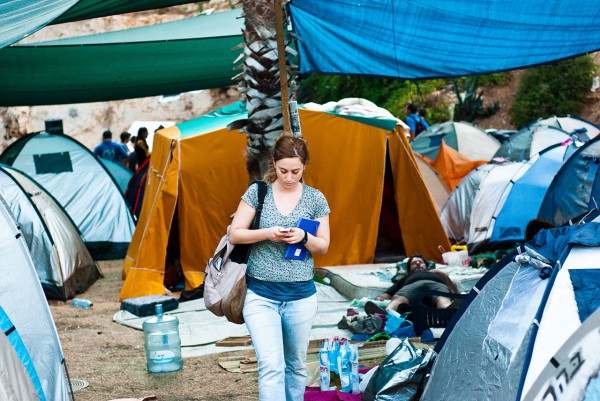 For several months in 2011, many Israelis protested the continual rise in housing costs, the cost of living and the erosion of the middle class and lower class and other various hardships. As part of the protest, people established tent compounds in the middle of central streets in major cities.

“Even the sparrow has found a home, and the swallow a nest for herself, where she may have her young—a place near your altar, Lord Almighty, my King and my God.”  (Psalm 84:3)

Faint memories linger of Tel Aviv and Jerusalem residents launching “tent cities” in recent years to protest unaffordable housing prices.  But now, university students in some smaller cities of Israel are set to adopt shipping containers as the next innovative, but affordable housing trend.

Israel’s largest youth organization, Ayalim, has worked on a dozen student villages, including within central Israel’s town of Lod and rocket-scarred Sderot. (Ayalim)

“Our response to aggression form Gaza is to build, strengthen and revive,” an Ayalim YouTube video states.  “We will scrape, paint, cut, saw, repair and renovate until Sderot becomes a healthy and growing city.”

Stacked three-high and girded by a metal framework with stairs, the student-housing village in Sderot, which has been devastated by Hamas bombs, also offers protection from Gaza fire with one bomb shelter to every two containers. (Green Prophet)

Described by the Washington Post as “chic but cheap,” the two-bedroom containers are being transformed into student nooks with large windows, a living room, a kitchenette and a bathroom.

With the new housing project, Israel is following in the footsteps of others in the United States, Europe and Australia who have valued the containers’ potential for upscale living, and of Middle Eastern nations who have used the containers as temporary housing for guest workers.  (Washington Post) 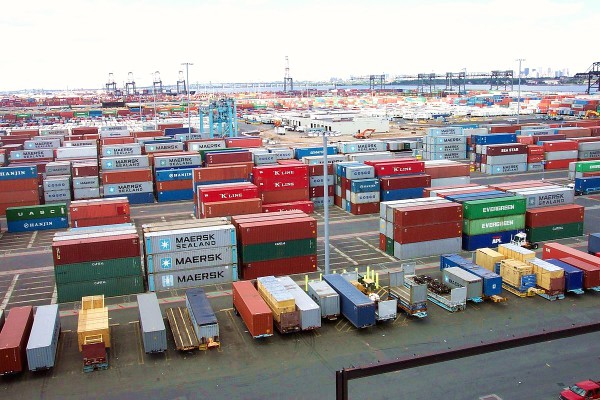 Shipping containers, which are only used for three or four years before being retired, are an innovative, low cost, environmentally friendly way to build housing.

“There are millions of these containers that can be used.  They are usually discarded after only two or three years and the companies don’t know what to do with them,” said Ayalim’s director of partnership, Effie Rubin.  “If we want to change the reality towards better education and job opportunities, we need to bring young people to the periphery towns.  There’s no reason why the majority of Israelis should squeeze into Tel Aviv.  People can live in nice houses like these for NIS 600 [157 USD] a month.”

Rubin told Green Prophet’s Miriam Kresh, “Our hope is that the students have an amazing experience and decide to stay.  We did a survey and discovered that students’ greatest obstacle to studying in the Negev and other periphery areas is lack of affordable housing.  There are no decent cheap apartments in the Negev or the Galilee.  The second discovery was that they tend to stay if they’re given a continuous sense of community; a feeling of being part of a group.”

“It’s going to be a trend in Israel to build this way,” Rubin said.  “It is cheaper, faster, and greener.”

“I don’t know of any other building technique that involves more recycling,” he added.  (JPost) 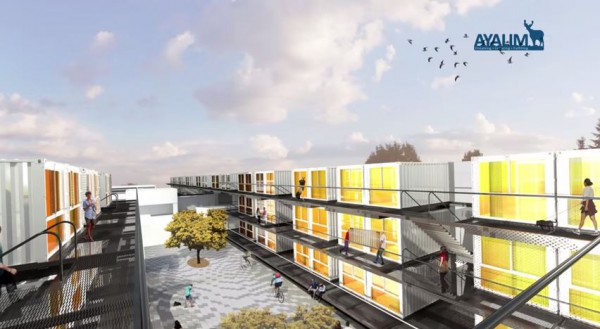 An architectural drawing of Ayalim student housing made from shipping containers in Israel.  (YouTube capture)

As Ayalim is a non-profit organization, the modification of 36 Sderot containers have been completed so far by about a thousand students and pre-army volunteers who have learned construction skills on site.

Students who wish to live in the containers at a subsidized rate will spend 500 hours (totaling 150,000 hours) per year of volunteer work with the children and youth.  (Ayalim)