Israeli technological advances are continuing to fulfill Bible prophecy that Israel will be a blessing to the world. 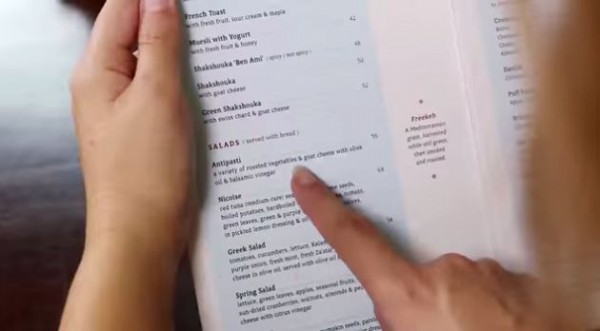 A visually impaired woman reads a menu with the help of OrCam.

One of the most recent is a smart camera called OrCam that provides new ways for the world’s 285 million visually impaired and 39 million blind to understand the visual world.

OrCam helps the visually impaired with an unobtrusive eyeglass attachment that reads text and identifies objects (street lights, bus numbers) by simply pointing a finger at them.

Invented by Hebrew University of Jerusalem professor Amnon Shashua (co-founder of Mobileye for vehicles), OrCam decodes text and objects and reads them to users via a bone-conduction speaker, giving them greater independence to read grocery labels, road signs, bus tickets and more.

OrCam also automatically recalls familiar image, such as credit cards and products and in the future will recognize faces, informing wearers that someone they know has walked into view, by comparing the visual feed to images saved in its databank via a hand wave.  (Haaretz)

At an introductory price of $2,500, OrCam costs about the same as a midrange hearing aid, with Intel infusing the company with a $15 million boost.  (GigaOm)

A pair of glasses fitted with the OrCam

“Brain areas have the potential to be ‘awakened’ to processing visual properties and tasks even after years or maybe even lifelong blindness, if the proper technologies and training approaches are used,” said Amedi, who runs the Center for Human Perception and Cognition at Hebrew University.  (NoCamels)

Another Israeli start-up has enabled a different kind of sight for millions of people who are in danger of the devastating power of a tsunami.  Recently, eVigilo’s multi-channeled alert and notification system forewarned Chile of an incoming tsunami.

It is also used to warn Israeli communities near Gaza of incoming rockets.