Israel’s Ministerial Committee for Legislation approved a bill this past Wednesday that mandates spoken Arabic instruction for Israeli students.  The bill is intended to build bridges among Jewish and Arab Israelis.

“Especially during these days, in which terrorism grows and coexistence is undermined, it is important to lower the flames and create a bridge of language, cultural understanding and rapprochement between citizens,” said Member of Knesset (MK) Oren Hazan (Likud), who co-sponsored the bill.

“There is no better way to do so than to learn the language in order to understand the culture and mentality of a million and a half Arab citizens in Israel and hundreds of millions of Arabic speakers throughout the Middle East,” he elaborated.  (Times of Israel) 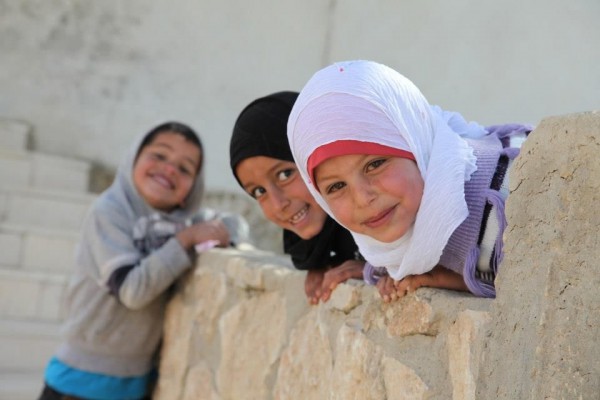 All of Israel’s neighbors and 20 percent of Israelis speak Arabic, which is one of the two official languages — Hebrew being the other.

Though English is not an official state language, road signs and product labels are often translated into English as well as the mandatory Arabic.

“At times like these, when the public sphere is rife with divisiveness and acts of racism, this [bill] represents a light at the end of the tunnel; it’s hope that things can be done differently,” Ben-Reuven told Israel HaYom.

“I have no doubt that when the Jewish population will understand Arabic the way the Arab public understands Hebrew, we will see better days,” added Hazan in an interview with the Jerusalem Post. 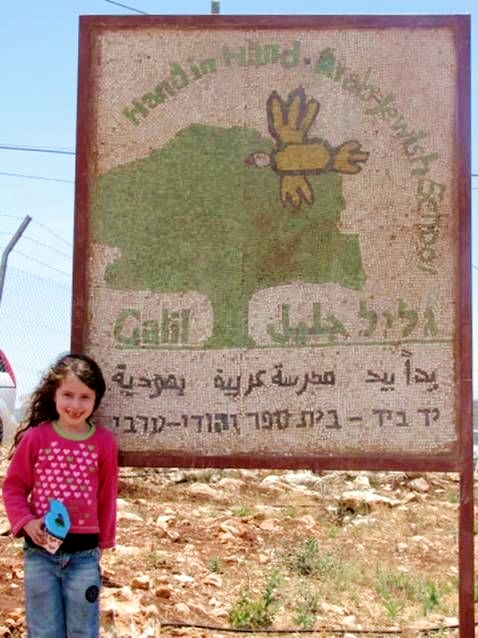 An Israeli child stands beside a Hand in Hand school sign.  Hand in Hand brings together thousands of Jews and Arabs in six schools and communities throughout Israel.

The language mandate, however, would not entirely be innovating the idea of bilingualism in Israeli schools: the six Hand in Hand (Yad beYad) schools of Israel already make “a conscious effort to bridge gaps and to create a culture of mutual understanding and respect,” writes Jerusalemite mom Ilana Nelson.

Each class is taught by one Arabic-speaking and one Hebrew-speaking teacher, so that students come to grasp both languages while keeping their own identity.

“In fact, it is known that kids at the Yad beYad school come out with a very strong sense of their own cultural identity and traditions — there is no attempt to blur identities there; everyone is respected for who they are and where they come from,” Nelson writes.

“We recognize that we are on the forefront of the fight against racism on both sides, and this motivates us to make the school the best it can be both as a school and as a community,” she said.

“Class gatherings are much more meaningful here than just meeting the parents of our kids’ friends.  From the simplest picnics to challenging meetings to discuss the matzav [the situation, a term referring to the Israeli-Arab or Israeli-Palestinian conflict].”

The Yad beYad network has six public schools: pre-K–12th grade in Jerusalem, 1st–6th grade in the Galilee, K–6 in the Arab neighborhood of Wadi Ara, and three preschools in Tira-Kfar Saba, Tel Aviv-Yafo, and Haifa.  (handinhandk12)

As far as English is concerned, because it is a global language of trade and tourism, and is required for high school matriculation and university entrance, parents of an Israeli school’s student body will often ask the school to offer English earlier than currently mandated.

The Ministry of Education’s English Inspectorate, in October 2011, stated that teaching English is compulsory in the fourth grade but most elementary schools start teaching English in the third grade, while other schools choose to provide English instruction in the first and second grades.