“Just as they did not think it worthwhile to retain the knowledge of God, …. they have become filled with every kind of wickedness, evil, greed and depravity.  They are full of envy, murder, strife, deceit and malice.”  (Romans 1:28–29)

At the meeting specially convened in Geneva at the request of the PA, Abbas urged the UN Security Council to “shoulder its responsibilities” in preparing a “special regime of international protection for our Palestinian people.  We want your protection — we want the protection of the world.”

In the meantime, Palestinians continue to take up axes and knives to attack Israeli civilians on the streets and soldiers at checkpoints.

Abbas’ false claims against Israel stand in stark contrast to his silence about the 35 Israelis killed and the dozens of others wounded by Palestinian terrorists in 2015. 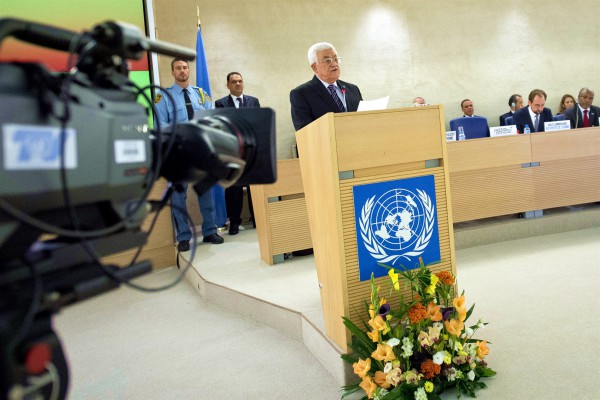 In response to Abbas’ speech, Israeli Ambassador to the UNHRC Eviatar Manor said, “What we have witnessed today is the glorification of terror and violence.”

“What the Council allowed today is the banalization of the spilling of Jewish blood,” Manor said.  (JPost)

“The role of the Council in fanning the flames of conflict and assisting in the dissemination of lies is now well established,” Manor said.

Although Abbas has not just ignored, but also encouraged terror attacks against Israelis, he told the Council that human rights in the Palestinian territories — as he has appropriated Judea, Samaria and eastern Jerusalem, as well as Gaza — are the “worst and most critical since 1948.”

“President Abbas did not speak about the situation of human rights in the areas under his responsibility.  He is perfectly aware of the abject conditions of these. No, he chose to name and shame my country,” said Manor after Abbas’ speech.

Meanwhile “Palestinian children have been taught to idolize the murder of Jews as a sacred value and to regard their own death in this ‘jihad’ as the pinnacle of their aspirations,” said Tzipi Hotovely, Israel’s Deputy Minister of Foreign Affairs. 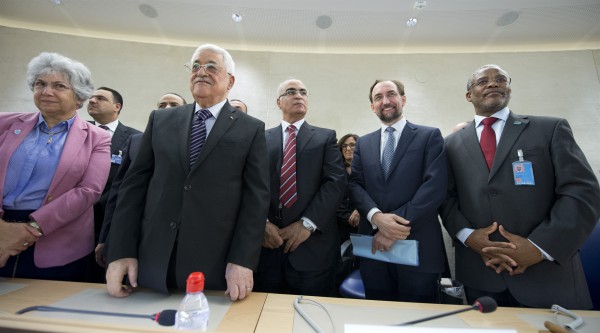 Abbas’ rhetoric to the nations continues to contrast his own incitement to terror:

“I once again call upon the Israeli people to achieve a just peace,” Abbas said before the Council — at odds with his September 18 appearance on PA television where he stated: “We welcome every drop of blood spilled in Jerusalem.  This is pure blood, clean blood, blood on its way to Allah.”

Deflecting all Palestinian-Arab culpability for the conflict, he placed it on the Israelis:  “Israeli policy turned the political conflict into a religious conflict, which will have destructive repercussions.”

“Our hands are extended for peace,” Abbas told the special UN session, yet he refuses to sit down to peace negotiations with Israeli Prime Minister Benjamin Netanyahu who has shown repeated attempts and good will to sit down with the PA.

Abbas reiterated previous claims that “it is no longer useful to waste time in negotiations for the sake of negotiations.”

While John Kirby of the US State Department did not respond to Abbas’ rhetoric specifically, making generic murmurings that “we want to see … words and deeds that do not do anything to escalate tensions,” Manor’s objections clearly address Abbas’ double talk. 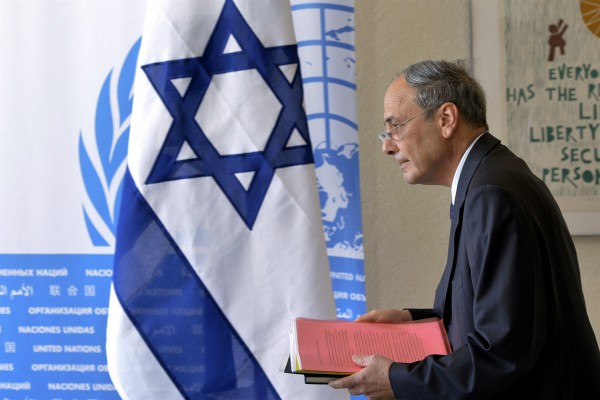 “Let me be very clear: the days of spilling Jewish blood without Jews allowed to defend themselves are long gone.  The Human Rights Council has forgotten that the right to life is a basic human right and that it is universal.  Jews in Israel have it, too.  And we shall exercise our right to life,” Manor said.

Israel may have to exercise their rights sooner than later in the face of the recent fatwa (Islamic religious decree) issued by Sheikh Sabri, the head of the Palestinian Supreme Islamic Council.

Two days before Abbas’ plea to the UNHRC in Geneva, Sabri said it is “religiously prohibited for Muslims to accept the ‘internationalization’ or ‘Judaization’ of Jerusalem.”

Further, the fatwa reasserts the Muslim allegation that the Jews have no historical or current claim to the land:

“The goal [of judaization] is to erase the character of the city and replace it with a fake Jewish identity.”

Abbas did not give the Council a feasible course of action for his requested intervention, but he did give an ominous warning that “this might be the last chance for this solution.”  (UN Multimedia)