As Jordanians Call to Excise Culture of Death from School, Palestinians Back Stabbings

“The Lord tests the righteous, but his soul hates the wicked and the one who loves violence.”  (Psalm 11:5)

As Jordan calls to fight terror by purging its education curricula of ideas that “aggrandize death,” Palestinians approve stabbings and classify car-ramming attacks as martyrdom operations.

Many Jordanians are seeking the removal of radicalized teachings from Jordan’s school curricula.

According to research by the Middle East Media Research Institute, a survey of articles in the Jordanian media reveals there is a call on the Jordanian Education Ministry to reform school curricula from extremist Islamic thought.

“Many politicians ignore the fact that the problem today lies in the emergence of a new culture that hates life, celebrates death, and attacks and quickly eliminates anything symbolizing liberty, life, and happiness,” said Jordan’s former minister of culture Sabri Rbeihat on November 15, 2015, also calling to purify curricula “of ideas that denigrate life, aggrandize death and accuse others of heresy.”

“The poisoned Islamist tree, planted in the 1960s, has borne fruit in the form of an educational system that opposes creativity and asking questions, sanctifies the past, does not deviate from its path, detests logic and anything new or innovative, levels accusations of heresy, and incites to hatred, violence, and killing,” said writer and educator Zuleikha Abu Risha.  (JPost) 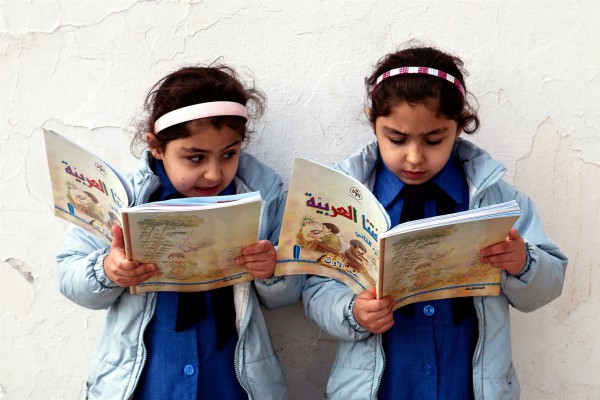 Nowhere is such a poisoned education atmosphere more evident than the ones under Fatah and Hamas, where children of the Palestinian Authority (PA) have been virtually brainwashed with lies about Israelis, the long-term effects of which can be seen in two recent PA polls.

According to a poll taken by the Palestinian Center for Policy and Survey Research (PSR), self-described as an independent non-profit, 67% of Palestinians approve stabbing attacks on Israelis.  (Jerusalem Online)

Only 51% of respondents believe that the Palestinians killed during the terror wave against Israel were guilty of stabbing or intending to stab Israelis, while 47% believe that the terror-wave perpetrators were not guilty at all of the stabbing attacks.  (TOI)

According to another Ramallah-based pollster, another 79% support attacking Israeli “soldiers and settlers,” while 10 percent are against it.

Palestinian Authority chair Mahmoud Abbas on Monday blamed the terror wave of stabbings, car rammings and shootings on a state of “despair” for Palestinian young adults, as well as falsely claimed visits by Israelis to the Al-Aqsa Mosque.  (JPost)

“They set out because they have begun to feel desperate about the two-state solution.  They wander around and see no logical basis for two states,” Abbas said, despite he himself turning down a two-state accord in 2008.  “Our state is non-existent — settlements and checkpoints.  They see no solution ahead of them.”

Yet, the PSR poll also found that only 45% of Palestinians support the two-state solution and 65% want 80-year-old Abbas to resign after the four-year term he was elected to in January 2005 has stretched to 11.  (Council on Foreign Relations)