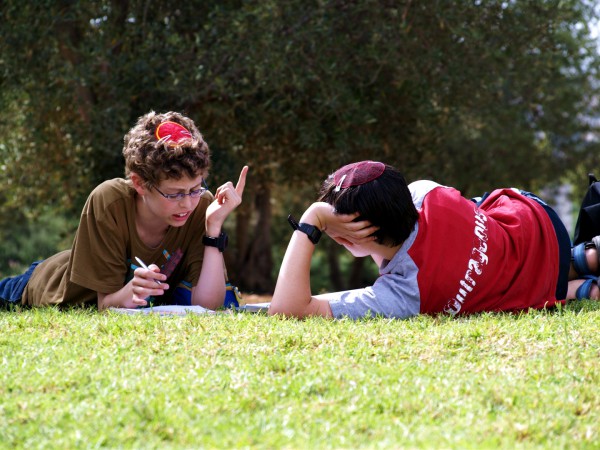 Israeli students study on the grass.  (Photo by Galit)

“All your children will be taught by the Lord, and great will be their peace.  In righteousness you will be established:  Tyranny will be far from you; you will have nothing to fear.  Terror will be far removed; it will not come near you.”  (Isaiah 54:13–14)

The uptick in violence in Jerusalem resulted last week in the closure of city schools.  Since most guards leave hours before the school day ends, the terror wave has brought into focus the schools’ security-budget deficit.

For several days, Jerusalem’s city officials had been demanding that the ministries of finance, education and internal security provide funds to increase the number of hours that security guards are posted at the entrances to Jerusalem schools.

On Sunday, an agreement was reached between the municipality and the state represented by Prime Minister Benjamin Netanyahu and Finance Minister Moshe Kahlon.

Beginning Monday, the Jerusalem municipality will station security guards at all schools in the capital until the end of the school day. 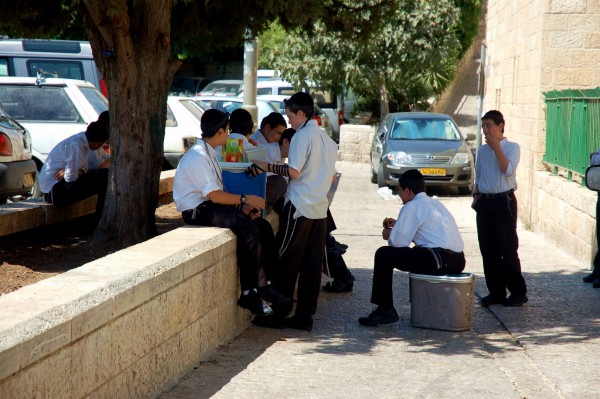 Both children and adults have to be on alert as this current terror wave rages.  (Photo by David King)

Last week Tuesday, the Jerusalem Municipality warned of an impending strike after its requests went unanswered to fill “a gap of over 20 million shekels in the [school] security budget.”

The State of Israel is responsible for covering the cost of guards for schools that police designate to be at risk, according to the Knesset (Israeli Parliament).

Jerusalem Mayor Nir Barkat said he has pressed for security funds from Israel’s ministries of public security, finance and education, as well as the prime minister’s office.  Barkat said that “in the current reality, every delay [in meeting the security budget] represents an abandonment of our children.”  (Times of Israel)

“I expect the Prime Minister to resolve the serious crisis,” Barkat said Thursday.  “The security situation is worsening and there is no progress.  As long as the government continues to avoid its responsibility for the security of educational institutions, we will not abandon our children.”

Last week Tuesday on Channel 2, before the school strike was announced, Jerusalem Parent-Teacher Association chairperson Paz Cohen pressed for a security-budget increase; the allocation would deflect tragedies which, Cohen argued, carry a much greater cost.

“We’re asking for minimal protection for our children — a responsible and trained adult to be at the entrance to all educational institutions throughout the day,” Cohen said.

Until that happens, Barkat declared on Saturday, with the cooperation of teacher and parent organizations, “that studies in all educational programs in the city (high school, grammar schools, kindergartens, and day cares) will end tomorrow [October 11] at 1:30 p.m., the time at which the security guards would finish their shifts.  Special education programs will continue as normal.”  (Israel National News)

That alternative solution has been, thankfully, averted.