“Now the earth was corrupt in God’s sight and was full of violence.  God saw how corrupt the earth had become, for all the people on earth had corrupted their ways.”  (Genesis 6:11–12)

A recently aired Hamas children’s show encouraged its young guests to make statements about “blowing up the Jews”; meanwhile, a video of a Hamas camp shows campers being trained with Iranian-made weapons.

In a children’s television show that aired September 4 on the al-Aqsa TV channel and was shared on September 16 by MEMRI with translation, the young female host encourages a pre-teen Muhammad Ali Zakariya Al-Astal to share a poem his mother taught him:

“Oh Jerusalem, I shall redeem you with my soul and my blood.  I shall liberate you from the Jews by means of the Al-Qassam Brigades, of course.  I bring glad tidings to our prisoners:  Salvation is near,” he recited. 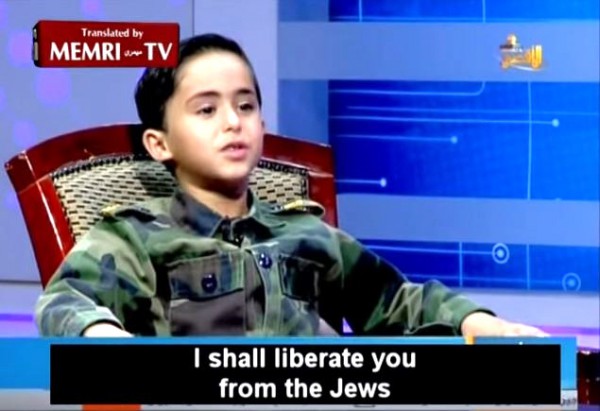 On a Hamas-affiliated children’s TV program, a Gaza child recites a poem promising to liberate Jerusalem from the Jews. His mother taught him the poem.  (YouTube capture)

The host then asks Muhammad what he wanted to be when he grows up.  “[A member of] the Al-Qassam Brigades,” he said.  The boy sitting with him, Zakariya, gives a more common answer: “An engineer.”

“An engineer? Why do you want to become an engineer?” the host asks.  Zakariya explained, “So that I can blow up the Jews.”

The Palestinian host, wearing a hijab with an innocent and friendly expression, corrects him with the politically correct synonyms often used in anti-Semitic attacks:  “You want to blow up the Jews?  No, we want to blow up the Zionists.  You mean the occupation, right?”

A teenage male guest host, Wissam, pitches in to encourage the boys:  “Keep waging jihad, and allah-willing, when you grow up, you will wage resistance against the Jews.”

“Bomb the occupation,” Wissam says without missing a beat, “and the al-Aqsa mosque will be liberated.” 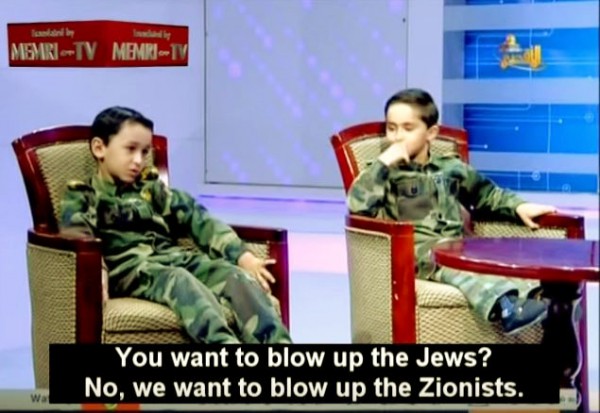 The host corrects the child when he says that he wants to become an engineer in order to blow up Jews, telling him that Palestinians want to blow up Zionists, not Jews.

On a second front of indoctrination, Hamas has been working for years to train children in techniques of war and terror, with Israel portrayed as the enemy and as the target.

Hamas has 50 camps in Gaza for the combat training of boys and girls divided into age groups starting as young as 12.  Other training has been allotted to age groups up through the age of 60.

Founding director of the Center for Near East Policy Research, David Bedein, claims an enrollment in these combat-training camps of 15,000 children per year.  This summer, Al-Monitor listed an enrollment of 25,000 campers to be taught in the Palestinian cause and to receive combat training.

“Despite the large numbers of Palestinians enrolled in the camps, some Palestinians such as Moustafa Ibrahim, a researcher at the Independent Commission for Human Rights (ICHR), warn against what they call the forced militarization of the next Palestinian generation,” writes Palestine Pulse contributor Adnan Abu Amer.  “They worry that such action could lead to a mainstream culture of violence and give Israel excuses to target Palestinian children, who show up at these camps carrying weapons.”

“The goal of these military training camps is to train the vanguard for liberation: spiritually, intellectually and physically, to be ready and able to play its role in liberation,” stated the Hamas movement’s Izz ad-Din al-Qassam Brigades, which claims that the camps provide two weeks of training “in military techniques and in firing live ammunition,” along with first-aid and rescue techniques.

In the August 6 closing ceremony of the camps, Mahmoud al-Zahar, a co-founder of Hamas, said that “Hamas now has seven fighting brigades making up an army to liberate Palestine from the Israeli occupation, and each brigade includes several battalions.  Hamas today has a regular Liberation Army trained with the latest training methods.”

Meanwhile, a video on the Iranian Supreme Leader Ayatollah Ali Khamenei’s website shows Iranian weapons striking the outline of American soldiers. Khamenei vowed that if war broke out between Iran and the United States, “criminal America … would emerge humiliated out of it.”  (YouTube)

The bases are “within the range of our accurate ballistic missiles.  There is no limit to the number we are capable of firing if they attack us,” Salami said.