Israeli Prime Minister Benjamin Netanyahu recently met with Father Gabriel Nadaf, a Greek Orthodox priest from Nazareth who has been hounded for encouraging Israeli Christian youth to enlist in the IDF.

Nadaf, who has been excommunicated by the Orthodox Church Council for his support of the full integration of Christian Arabs into Israeli society, as well as service in the IDF and national service, has received death threats and been the target of verbal attacks from Arab MKs (members of Israel’s parliament).  (JPost)

Growing numbers of Christian Israeli Arabs are now shunning boycotts and ignoring the discouragement of Arab leaders to serve in the Israeli military or to perform national service.

In fact, the number of Christians overall joining the IDF (Israel Defense Forces) has tripled since last year growing from 35 to 100 in 2013.  (Algemeiner)

Another 500 have volunteered for Israeli National Service programs, working as fire fighters, paramedics, and social workers.

At the meeting with Nadaf, Netanyahu announced the formation of a joint government-community forum “to promote the enlistment of Christian community youth in the IDF and national service and their integration into the life of the state.” 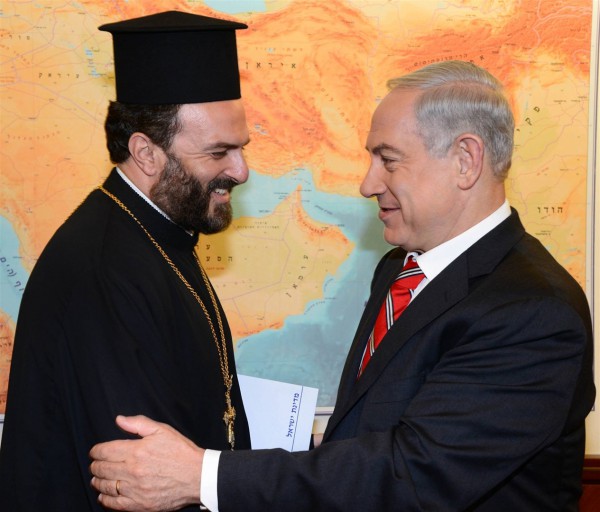 Prime Minister Benjamin Netanyahu meets with Father Gabriel Nadaf, a Greek Orthodox priest from Nazareth who is the spiritual leader of a forum for the enlistment of Christian youth in the IDF.

“Our goal is to guard the Holy Land and the State of Israel.  We have broken the barrier of fear—the state deserves that we do our part in defending it.  Those who oppose the integration of the Christian community in the institutions of state do not walk in the path of Christianity,” Father Nadaf said at the meeting.

“Members of the Christian community must be allowed to enlist in the IDF,” Netanyahu responded.

“You are loyal citizens who want to defend the state and I salute you and support you,” he said.  “We will not tolerate threats against you and we will act to enforce the law with a heavy hand against those who persecute you.  I will not tolerate attempts to crumble the state from within.  The State of Israel and the Prime Minister stand alongside you.”

The forum will reduce red tape, making enlistment from within the Christian community easier.

Measures to protect those who volunteer from violence will be enforced, as well as a law against those who incite the violence.