Netanyahu Calls for Unity and Moral Clarity at AIPAC

“Be merciful to me, my God, for my enemies are in hot pursuit; all day long they press their attack.  My adversaries pursue me all day long; in their pride many are attacking me.  When I am afraid, I put my trust in you.”   (Psalm 56:1-3) 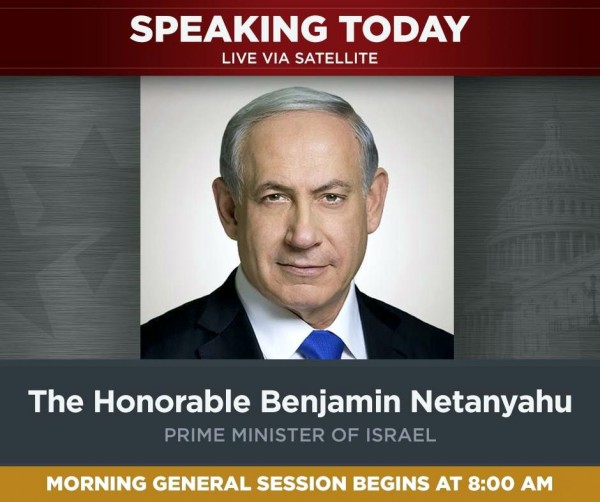 Israeli PM Netanyahu delivered his address to AIPAC via satellite.

In a video address from Jerusalem, he expressed his condolences to the loved ones of the victims of the Brussels’ terrorist attacks, adding that the worldwide attacks are “one continuous assault on all of us.”

“In all these cases, the terrorists have no resolvable grievances.  It’s not as if we could offer them Brussels, or Istanbul, or California, or even the West Bank.  That won’t satisfy their grievances,” he said.  “Because what they seek is our utter destruction and their total domination.  Their basic demand is that we should simply disappear.

“Well, my friends, that’s not going to happen,” he added, stating that the world must “join together and fight them together.   That’s how we’ll defeat terrorism — with political unity and with moral clarity.” 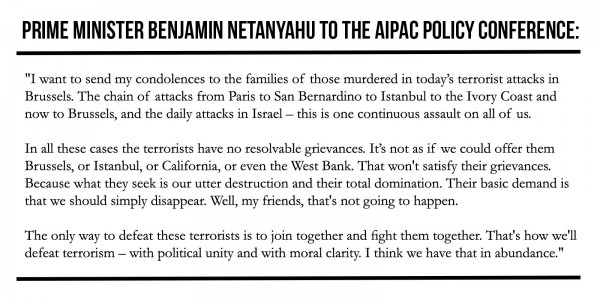 Global efforts to unite politically against terrorism contrast with the international criticism Israel faces as it struggles to protect its citizens from Palestinian violence. Moreover, the United Nations turns a blind eye to terrorist activity endorsed by the Palestinian Authority.

One recent example of the UN’s own endorsement of anti-Israel bias was the UN Human Rights Council appointment of Canadian law professor Stanley Michael Lynk to the role of “Special Rapporteur on the situation of human rights in the Palestinian territories.”

His role is simply a means for the UN to target Israel, as the Special Rapporteur’s mandate excludes any authority to criticize Palestinian violations.

Canada’s Foreign Affairs Minister Stéphane Dion questioned the appointment of Lynk in light of past statements that indicate his bias against Israel.

“[The candidates] are not nominated by their states and anyone can apply directly to the UN; this candidate was not put forward by Canada and does not represent the views of this government,” Dion’s office said in an emailed statement. (National Post) 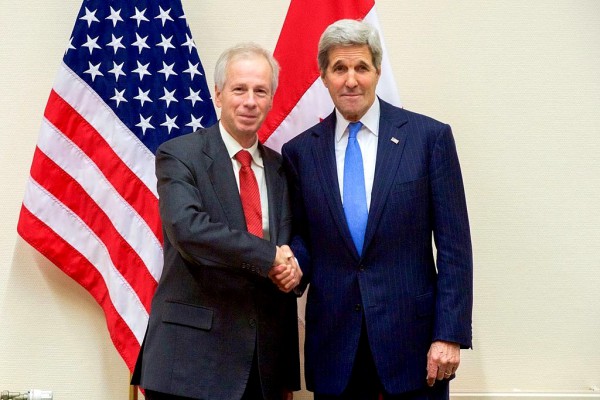 Netanyahu also told AIPAC that efforts by the UN Security Council to set up a Palestinian state prior to a Palestinian commitment to peace would be deeply destructive to the possibility of peace.  It would, in effect, free the Palestinian Authority from the negotiating table.

Peace can only come “through direct negotiations between the parties” — Israel and the Palestinian Authority — Netanyahu stated.

“A Security Council resolution to pressure Israel [into a forced two-state solution] would further harden Palestinian positions and thereby could actually kill the chances of peace for many, many years,” Netanyahu emphasized.  (Ynet)

Netanyahu expressed hope to the record AIPAC crowd that the US would use its veto power as one of the Council’s five permanent members to reject such resolutions by the Security Council, which has the authority to issue physical and economic sanctions on international bodies, as well as military action against “erring members” of the council.

Such an action on the part of the United Nations would be a fulfillment of Bible prophecy regarding the nations coming against Israel in the Last Days as described in Psalm 83 and Ezekiel 38–39. 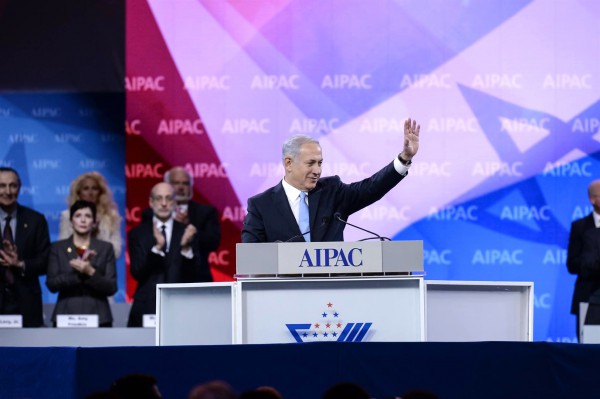 The prime minister stressed that the State of Israel is ready for negotiations “immediately, without preconditions,” and offered his “best formula for achieving peace” as being “two states for two peoples in which a demilitarized Palestinian state finally recognizes the Jewish state.”

Palestinian leaders such as Mahmoud Abbas have refused to recognize Israel’s Jewish identity, in other words, the Jewish people’s right to live in the Holy Land.