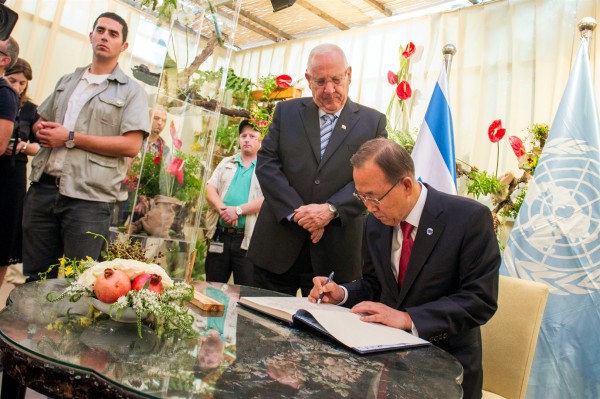 Israeli President Reuven Rivlin opened his sukkah to the public during the week-long holiday of Sukkot.  In the photo above, Secretary-General of the United Nations Ban Ki-moon signs the guestbook.

“Then the survivors from all the nations that have attacked Jerusalem will go up year after year to worship the King, the Lord Almighty, and to celebrate the Festival of Tabernacles.”  (Zechariah 14:16)

Heralding the future fulfillment of Zechariah’s prophecy, thousands of Christians gathered in Jerusalem to celebrate this year’s Sukkot (Feast of Tabernacles).

Among the Sukkot events this year was the 35th annual celebration of the Feast of Tabernacles by the International Christian Embassy Jerusalem.

Because this event draws over 5,000 attendees from 80 nations, Jerusalem leadership and the ICEJ decided to upgrade to a bigger venue, the state-of-the-art Payis Arena, which opened in September 2014.

“(Jerusalem Mayor Nir) Barkat urged us to make the move, and we were the first international gathering in the new arena,” ICEJ media director David Parsons said.  (Times of Israel) 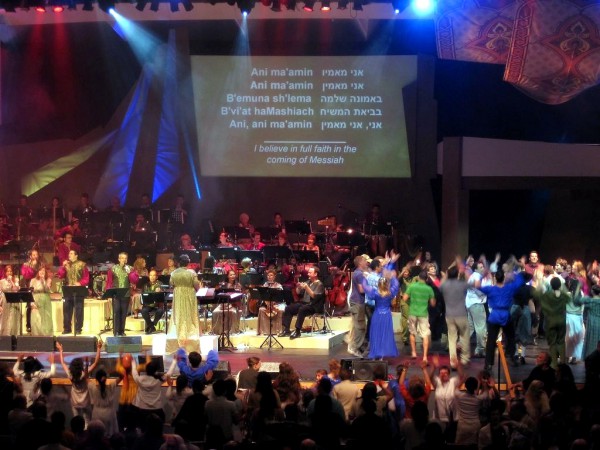 Believers gather in Jerusalem during Sukkot to worship God.

While the ICEJ’s feast schedule spanned a full six days, from October 10–15, the high point of the conference was “Israel Night,” which drew a large Christian audience and quite a few Jewish representatives—including Israeli President Reuven Rivlin, World Jewish Congress president Ronald S. Lauder, and dozens of paratroopers from the Israel Defense Forces marching in uniform to Kobi Oshrat’s “Hallelujah.”

“The relationship between the Zionist and Christian worlds has historical roots,” Rivlin said at the event.  “Throughout history, the Zionist movement has gained the support of various religions, and this friendship grows stronger, in order to serve the world.”

“The Jewish people had a dream to build a home in its native country, a democratic Jewish state.  This dream has come true thanks to friends like you,” Rivlin added.  “Our societies, who share common values of love for human beings and acceptance of others, should continue to cooperate to create a shared vision.” 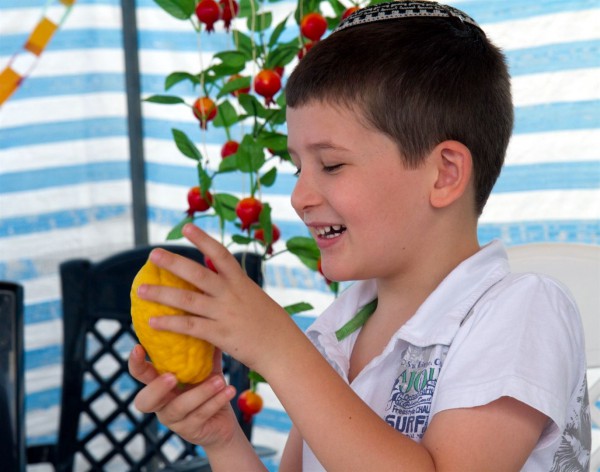 An Israeli boy in a Sukkah (temporary shelter for the Feast of Tabernacles) examines a fragrant citron, one of the Four Species of Sukkot (see Leviticus 23:40).

Keynote speaker Robert Stearns, founder and executive director of Eagles’ Wings ministry, also spoke of the historical division between Jews and Christians and the need to unite.

“Horrible things were done to Jews in the name of Christianity, but that was never the spirit of the true followers of Jesus,” he said.  “Jesus was not a Christian.  He was a Jew, and we follow the Jewish Jesus.  We received the Bible and the Prophets from the Jewish people.”

Meanwhile, several noteworthy Jewish and Christian leaders, including Lauder, introduced a joint letter urging world leaders to bring an end to the persecution of the Middle East’s Christians.

“We as Jews know how important it is to speak out.  In the 1930s in Germany when Jews were deprived of their rights and persecuted, the world was silent.  We know what happens when the world is silent, so today we are standing up and speaking out,” Lauder said.

“Just as Christians defend Jews against anti-Semitism, just as Christians support Israel, we Jews have an obligation to speak out against the growing persecution of Christians in many parts of the world,” Lauder said.  “When hundreds of thousands of Christians—men, women and children—are killed, this isn’t war.  This is genocide.  And we Jews know what happens when the world is silent to genocide.”  (World Jewish Congress)

“Islamist extremists have launched a full-fledged assault on our Western values, on our civilization, and Jews and Christians must work hand in hand to defeat this threat,” he said.  “Together, we must speak as one and tell the world: no more discrimination, no more terror, no more death, and no more silence!” 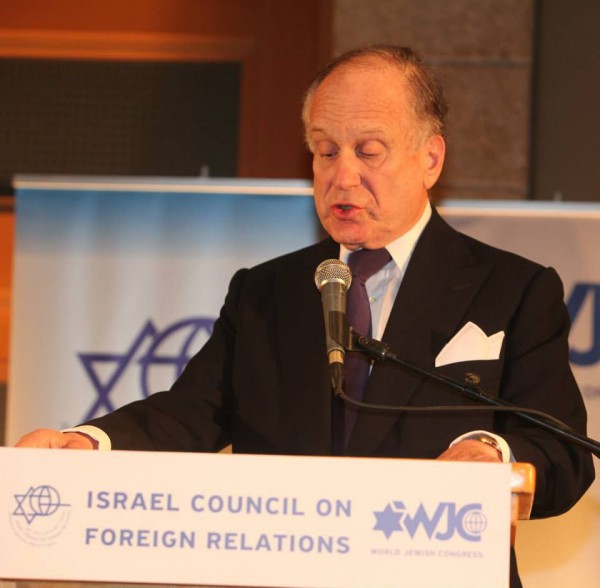 Lauder’s signature joined those of ICEJ executive director Dr. Jürgen Bühler and of Dr. William Wilson, co-chairman of the Empowered21 Global Council, an Oklahoma-based organization that seeks “a fresh outpouring of the Holy Spirit in the 21st century.”

“To have a prominent global Jewish leader lend his voice to this moral call for protecting the region’s persecuted Christians is unprecedented in modern times,” Bühler said.  “We welcome all others of goodwill who will take a stand now for these vulnerable ancient Christian communities.”  (Israel National News)

The “Vicar of Baghdad,” Reverend Canon Andrew White, also responded gratefully to Lauder’s presence at the event, noting that the Church also needs to stand with Iraq’s beleaguered Christians.

“Here we see Jews standing with us, but where is the Church?” he asked, noting that Christians who are fleeing the Islamic State urgently need of food and water.

“I was hungry and you gave me something to eat, I was thirsty and you gave me something to drink, I was a stranger and you invited me in, I needed clothes and you clothed me, I was sick and you looked after me, I was in prison and you came to visit me. … Truly I tell you, whatever you did for one of the least of these brothers and sisters of mine, you did for me.”  (Matthew 25:35–40)